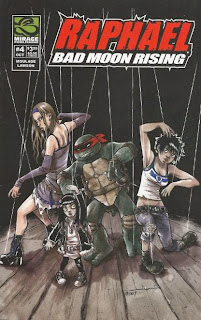 The vampire femmes are about to sink their teeth into the mesmerized Raph when Sloane, in full werewolf form, comes barreling through the wall (with Shadow and Lulu behind her). 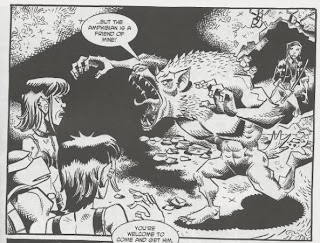 Outside the tower, on the battlefield, Lord Chiton confronts Lord Incubor, leader of the vampire armies and kidnapper of his ex-wife (Lilith).

Back inside the tower, Sloane and Shadow tussle with the vampires until Raph gets his wits back.  They beat up the ladies and demand to know where Lilith is being held.  After getting directions, Raph and friends run off.  Once they’re out of sight, the vampire women laugh amongst themselves then make a call on their cell phone.

On the battlefield, Lord Incubor receives the message.  He tells Lord Chiton that they need to extend the battle another 15 minutes, then they can play out the rest of their drama.  Lord Chiton is pleased that the plan is running so smoothly.

And back in the tower, Raph and the rest find Lilith’s cell guarded by a horde of zombie werewolves.  Sloane thinks they’re the missing members of her Pack and refuses to fight them, leaving the rough stuff to Raph and Shadow.

Outside, Lords Chiton and Incubor throw a phony one-on-one match, with Incubor coming out the loser.  The vampire forces retreat and the Atlantians declare victory.

Inside, Lulu opens the cell while Raph and Shadow keep the zombie werewolves busy.  Lilith is inside and Lulu unshackles her mother.  Sloane helps Lilith out of the cell and the Pack leader soothes the zombie werewolves.  Although they are not of her Pack, Lilith extends an invitation for the creatures to join her.  Sloane asks what happened to their Pack and Lilith explains that she ordered them into hiding the moment the Den came under siege.  Lilith thanks all for helping to rescue her, vowing to help Sloane regain the missing piece of her soul and calling off the vendetta against Shadow and Raph in gratitude. 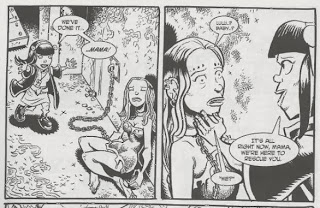 Outside the tower, Lilith is reunited with Lord Chiton.  Chiton explains that even though they are divorced, he still cares for her and would never let the mother of his child fall into enemy hands.  Raph seems incredulous.

In a dark hallway, Chiton meets with Incubor and the two exchange briefcases.  Incubor is paid handsomely for both throwing the battle and for performing his part in the entire kidnapping scheme.  Sloane then steps out of the shadows and takes the briefcase from Incubor.  It contains her soul, which she asks Chiton to reinsert into her body through undisclosed sexual acts. 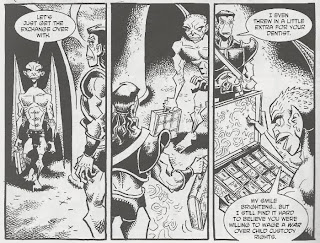 After Incubor leaves, Raph and Shadow come out of hiding and demand to know what just went down.  Chiton says that getting his mistress back her soul was only a part of the scheme.  Chiton has had joint custody of Lulu for some time, but hasn't exactly enjoyed sharing his daughter with his ex-wife.  By having Lilith kidnapped, thus thrusting Lulu into mortal danger, then “risking everything” to rescue his ex-wife, Chiton believes the ruse will work in his favor at the next custody hearing.

Raph and Shadow are incensed at having been used as pawns in such a petty domestic feud.  Lord Chiton is unapologetic and reminds them that if they’d like to return to Earth, they’d best keep these details a secret.  After Chiton and Sloane exit, Raph and Shadow both share a few curses of impotent rage, realizing they’d been hoodwinked.

*This story is continued from Raphael: Bad Moon Rising #3.

*The politics of the supernatural world as well as the aggressions between the vampires and the werewolves will be seen again in Tales of the TMNT (Vol. 2) #39.

Looking over “Bad Moon Rising” in its entirety, I’m going to try (TRY) to give it some credit.  I think what Moulage was going for was something akin to the outer space adventure arc of TMNT (Vol. 1) #4 through TMNT (Vol. 1) #7.  The rhythm of that arc involved the Turtles getting thrust into a strange setting, desperate to find a way back, and caught in the middle of a larger war between opposing alien forces.  That arc also set up the landscape of the various extraterrestrial entities (the Utroms, the Triceratons, the Federation) and their relationship with one another.  It was world-building stuff that would prove important in the long run, establishing a broader mythology outside of just the TMNT and the Foot Clan.

“Bad Moon Rising”, by all appearances, wants to do that very same thing, but with the supernatural elements of the Mirage universe.  We’ve got vampires, werewolves, Atlantians, Zombies, Elves (I guess?) and all manner of fantastic creatures, with this tale ostensibly explaining where they come from and their political relationships with one another.  The difference is that this story really, REALLY sucks.

As something intended to flesh out the paranormal side of the Mirage universe, it doesn’t seem interested in tying all that much together, either.  The Atlantians seemed like an opportunity to explain the origins of the fish-people from “Sons of the Silent Age” and Volume 2, but no effort or reference is made to that effect.  And I can’t say I’m very surprised Moulage didn’t try to incorporate ideas from the larger universe into this one and tie everything together; the guy couldn’t even keep his own ideas straight between issues of this miniseries.  Lulu went from being an elf to an Atlantian between issues and likewise her father’s identity (and relationship to Lilith) changed completely, too.

It’s just a clumsy, amateurish mess and beyond a single reference in one issue of Tales of the TMNT, an issue that was published concurrently with this miniseries, absolutely NONE of this supernatural world-building shit ever comes into play again.  This story doesn’t make the Mirage universe richer or more coherent, it just brings down the Mirage catalog’s grade point average by being absolutely terrible.

As for this individual issue, there are moments that just made me set down my comic and rub my brow until the frustration dissipated.  When this issue opens, the first 2 pages are actually a redrawn repeat of the last 3 pages of the previous issue (Raph coming to in the pit and then being seduced by the vampires).  Moulage even paraphrases the dialogue from those pages.  Yes, “paraphrases”.  Not “copies”.  So you end up with the same scene, played twice, and Raph speaking slight variations of the same lines between them.

You know how in some TV shows, a character will say something like, “Time to die, scum!” and then pull the trigger of their gun right before the commercial break?  Then, when the show resumes after the commercial, they’ll play that same scene again, except this time the character says, “You’re dead, dirtbag!” before pulling the trigger?  Well yeah, it’s like that and it makes you wonder “why”?  Didn’t Moulage have a copy of his own script sitting next to him?  Couldn’t he have used the same dialogue?

And for that matter, why are the first 2 pages of this issue a repeat of the last 3 pages of the previous issue, anyway!?  Now we’re just paying twice for the same content.

The entire conflict being a sneaky custody battle might have been clever, but by the time we got to the end of this thing and the curtain was lifted, I just couldn’t bring myself to care anymore.  Doesn’t help that the big twist was preceded by Raph drinking a glass of semen.

“Bad Moon Rising” was a bad comic and I assure you, it is 100% skippable.  Even if you include Tales of the TMNT (Vol. 2) #7 in your collection, this story adds nothing to it or the Mirage universe at large.  Buy it at your own risk and don’t say I didn’t warn you.

Grade: F (as in, “Finding myself in total agony as I suffered through this thing, my only respite came from reading Lord Chiton’s lines in Tim Curry’s voice”.)
Posted by TMNT Entity at 6:46 PM