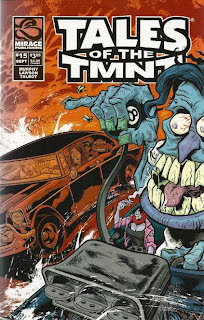 Frontispiece: While dodging numerous ninja weaponry, Mikey considers how he’s never been a “car guy”.  He likes cars, but just as a way to get from point A to point B.  Casey, Raph and Don are huge car fanatics, though.  All this reminds him of the first time he drove cross-country on a road trip…

At a gas station in Colorado, Casey dotes over his beloved ’57 Chevy Bel Air (which had belonged to his dad before he inherited it).  Shadow comes out of the minimart and rejoins Casey and Mikey on their road trip.  As they continue moving, Shadow looks over the journal of her mother and, continuing the entries in her own words, laments that she never got to know her.  They eventually arrive at the cliff where Casey spread Gabrielle’s ashes.  Shadow finds some branches and builds a makeshift cross as a memorial for the mother she never knew. 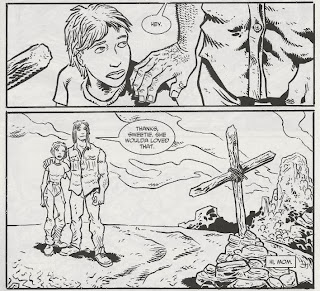 Back on the road, Casey sees a guy on a ’72 Moto Guzzi V-7 Sport go flying past at 110.  Casey is impressed by the bike, though his passengers don’t share in the enthusiasm.  Shadow is lost in an issue of Fortean Times, a supernatural magazine.  This particular issue has a feature on highway apparitions.  Casey blows the idea off as superstition, while Mikey is interested to hear more.

They stop at a roadside diner and Casey and Shadow take a seat at the bar (after promising to bring Mikey back some grub, later).  A pair of local old timers recognize that the pair aren’t from around these parts and decide to warn them about Von Clutch.  They say Von Clutch is a ghost who races foolish folks for their souls and that he can’t be beat.  Casey has had enough of ghost stories and orders his food to go.

Later that night, beneath a full moon, Casey suddenly sees a woman standing in the middle of the road and swerves into a ditch to avoid her.  Shadow insists the woman had no head, but Casey nixes the idea.  The Chevy mysteriously won’t start back up again and Casey takes a look under the hood.  Meanwhile, Shadow walks off into the rocks to go pee.  After finishing up, she finds a disembodied skull half-buried in the dirt and brings it back to show Mikey.

Suddenly, they’re met by Von Clutch (a big-headed, bug-eyed greaser in a ’55 Ford) who challenges them to a race.  A gaggle of ghosts encircle the group (including the biker from earlier) and they all claim they lost to Von Clutch and now have to serve as his entourage for all eternity.  Von Clutch mocks Casey’s Chevy, which is all it takes to incite Casey to participate in the ghostly drag race. 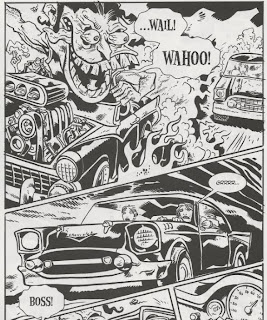 As they speed down the highway, Von Clutch takes the lead and things look bad.  Shadow notices the woman in Von Clutch’s passenger seat (Darlin’) is the same headless woman from earlier.  Shadow asks Mikey to pass her the skull while Casey pulls up next to Von Clutch.  Shadow tosses the skull at Darlin’, who proceeds to fit it back onto her neck.  Darlin’ tells Von Clutch that now that her head has been restored, the curse is lifted and they can continue on their way to Heaven.  Von Clutch forfeits the race and drives off into the sky.  The other spirits thank Casey for freeing their souls and depart. 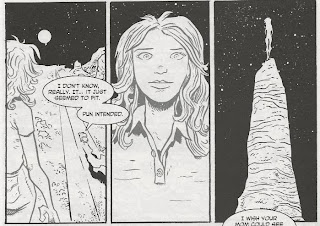 Casey tells Shadow that was good thinking and they all get back on the road.  Casey wishes Gabrielle could see how smart her daughter has grown.  From a cliff overlooking the highway, the spirit of Gabrielle watches as they drive off into the distance.

*This story takes place toward the end of the Mirage “Volume 3” era and near the start of TMNT Volume 4, judging by the date in Shadow’s journal entry (May 10, 2001).

*Gabrielle (Shadow’s mom) died in TMNT (Vol. 1) #58 and Casey spread her ashes off the cliff in that same issue.

*To counter Casey’s skepticism, Shadow mentions the time she fought werewolves in Tales of the TMNT (Vol. 2) #7.

*The characters of Von Clutch and Darlin’ are owned by Funatix!, Inc., an intellectual property mill founded by Peter Laird and staffed with Mirage employees while otherwise not being an arm of Mirage.  According to the opening editorial, Von Clutch would appear in another Funatix! property called “The Howlers”.  Dunno if that ever panned out or not.

Well, it takes 18 pages to get to Von Clutch, 6 pages for the stakes of the race to be established, and then 4 pages for the actual race itself.  So yeah, 24 pages of buildup for 4 pages of action.  And the race ends in a sudden forfeit, too.  How unsatisfying can you get?

To be fair, there’s some good stuff in those 18 pages (EIGHTEEN PAGES) of setup.  Shadow visiting the cliff where Casey spread Gabrielle’s ashes and contemplating that she never knew her mother; that was some nicely poignant stuff.  Prior to this, we’d never gotten any scenes where Shadow thought about Gabrielle, so it’s sweet to see how she imagines what her mother might have been like and tries to develop a connection with a person she never knew.  Likewise, cliché as it is, the bit where Casey and Shadow visit the diner and get the lowdown on Von Clutch from a pair of old timers was appropriate mood setting.

It just… it boggles the mind how this stuff could take 18 pages.  Everything else is padded with inane conversations about gummi bears, Casey acting stupidly skeptical (when there’s no reason for him to be, given his experiences, other than Murphy needing SOMEONE in the cast to play the part), two pages of Shadow squatting and peeing because we needed to see that, and masturbatory moments where Lawson and Laird wallow in their self-indulgent boners for Moto Guzzi (their joint hard-on for that particular brand of crotch rocket is absolutely obnoxious.  Yes.  We get it.  Harleys suck and Guzzis are better.  NOBODY CARES).

I just can’t help but feel there was a much more economical way to tell this particular story without losing any of the substance (Shadow pondering what Gabrielle was like being the real heart of this tale).  Or at the very least, there must have been some other way to distribute the plot elements of this story so that the actual race isn’t truncated to a meager 4 pages.  It’s just not very well plotted at all.  And is there any excuse for that when the credit for “plot” belongs to four different people?

Also, if all this seems a little like déjà vu, then I guess that means you’ve read “Sky Highway” by Rick Veitch.  That was the story that first established Casey’s obsession with his Chevy and it also featured him in a high-speed battle against supernatural creatures inspired by the art of Big Daddy Roth.  “Hell’s Blacktop” dredges up Casey’s obsession with his car (which hadn’t been a factor since “City at War” used it as symbolism for his character growth) and once again pits him against knock-offs/parodies/homages (take your pick) of Big Daddy Roth monstrosities.  In a way, “Hell’s Blacktop” feels almost insultingly insincere.  You see, Rick Veitch was one of the only contributors to the Mirage TMNT (Vol. 1) “guest era” who outright refused to sign Eastman and Laird’s “mandatory retroactive work-for-hire contracts”.  As a result, Mirage (now Viacom) does not have the rights to reprint any of Veitch’s issues, at least not without having to pay him royalties (something they really, REALLY didn’t want to do).

So we get this thing: Superficially the same story (Casey obsesses over his Chevy, fights Roth-monsters), but with the caveat that Mirage owns it wholesale.  The opening editorial even includes a boastful paragraph about how Peter Laird, via Funatix!, owns these characters outright, nah nah nah.

While I doubt there was all that much malice in the creation of this story, “Hell’s Blacktop” does somewhat feel like Mirage endeavoring to create a version of “Sky Highway” that wouldn’t require them to pay Veitch a thin dime.  It wouldn’t be the first time.  A year after Veitch created the character of Bloodsucker, Mirage employees created the identical character Wyrm save for one vital distinction between the two: Wyrm didn’t require royalty payments to Veitch.

Anyway, even if you divorce “Hell’s Blacktop” from “Sky Highway” in both story and real world controversy, it’s still not very good for all the reasons I discussed at the top of the review.  It has some intriguing ideas and at least one valuable moment to Shadow’s growth as a character, but spends the first 2/3 of the book wasting time for no discernible reason and then squanders the action because it ran out of room.

Grade: D (as in, “Don’t worry.  If you wanted more ramblings about the superiority of Moto Guzzis, TMNT Volume 4 is just around the corner!”)
Posted by TMNT Entity at 12:20 PM