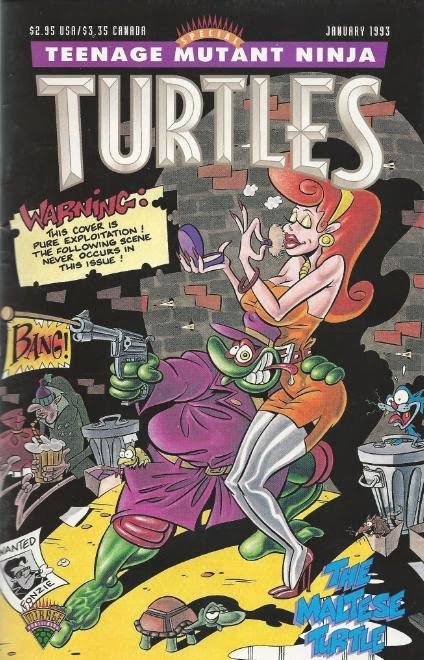 Frontispiece: Raphael, garbed as an old timey gumshoe, claims that the world can be full of sacks of manure falling from the sky.  You can try to avoid them, but sometimes you get hit, anyway.  In fact, all this talk of manure sacks reminds him of a story…

At the New York City Zoo, the Mayor unveils the latest exhibit: The exceedingly rare Maltese Turtle.  After dark, though, a pair of thieves make off with the Maltese Turtle (not before an impromptu game of football with the night security). 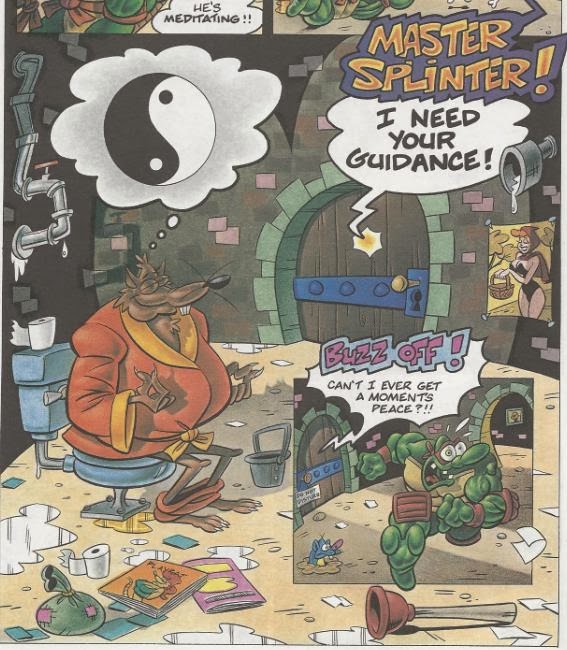 The next morning, Raphael reads about the theft in the newspaper.  Wanting to help a fellow reptile in need, Raph tries to rally his brothers and Splinter into action, but they ignore him.  Donning a trench coat and fedora, Raph decides to get to the bottom of the mystery on his own.

His first stop is City Hall, where the Mayor reads the ransom note from the Doltish Bros. (demanding “lots a money”).  Now knowing what name to ask around for, Raph begins searching every joint in the city.  After following all his leads and turning up nothing but dead ends, Raph is about ready to quit.  A nearby shoeshine boy, however, suggests he just look for the Doltish Bros. in the phonebook.  And wouldn’t you know it?  The address to their secret hideout on Pier 20 is right there in the Yellow Pages. 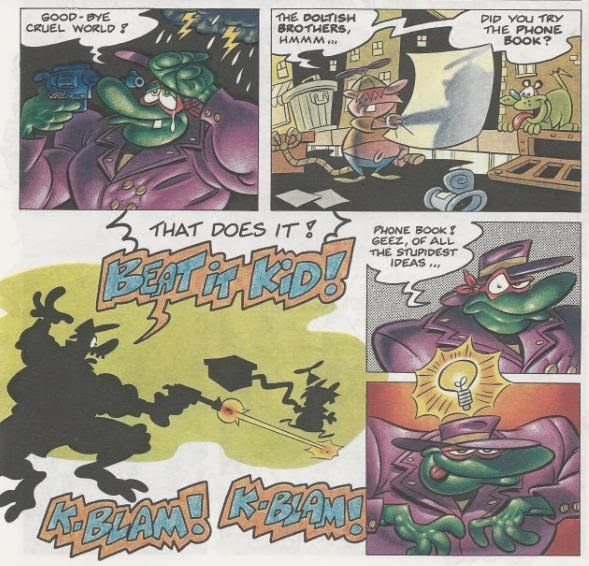 After dark, Raph peeks in at the old warehouse and sees Ma Doltish scolding her boys for stealing something as useless as a turtle.  After giving her sons a scolding, she storms off.  Raph takes the opportunity to barge in and attack, but the Brothers gang up on him.  He tricks them into freezing with a game of red light/green light and figures he’s got the Maltese Turtle in the bag.  That’s when Ma Doltish bonks him on the head with a rolling pin.

The Doltish Bros. fit Raph with a pair of cement tennis shoes and then chuck him off the pier.  Being a turtle, Raph has no trouble breathing underwater, but he’s still stuck.  Concentrating, he projects his consciousness out across the Astral Plane to send an SOS to Splinter.  After a brief stopover in the Batcave, Raph reaches the lair.  Unfortunately, Splinter misinterprets the tiny floating Raphael as a bug and squishes him.  Raph’s consciousness returns to his body and square one. 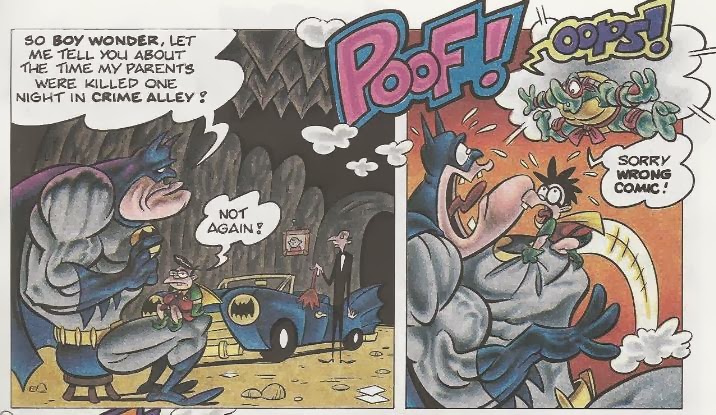 Inside the warehouse, the Doltish Bros. are watching a special news report on the Maltese Turtle.  Apparently it was discovered by Professor Noah Little during an expedition to the Island of Maltese.  The Turtle is said to be cursed by the vengeful Turtle God and will bring great misfortune to anyone who tries to possess it.  The Doltish Bros. begin to get nervous.

Meanwhile, out on the water, a fisherman snags Raphael with his hook.  He reels Raphael out of the cement anchor and his trench coat, then sends the Ninja Turtle flying with the backlash.  Raph crashes through the roof of the warehouse and lands in front of the Brothers.  Seeing Raph as a giant turtle for the first time, they mistake him for the Turtle God and run away scared.  Raph snickers at their stupidity, then sees the giant shadow of a turtle cast upon the wall.  Believing it to be the REAL Turtle God, Raph runs away screaming.  The shadow, of course, belongs to the Maltese Turtle.  Ma Doltish comes out of the kitchen to scold the Maltese Turtle for trying to escape, to which it responds by chomping down on her finger and judo-flipping her into submission.  And so the Maltese Turtle escapes all on its own.

Epilogue: Following this caper, the Doltish Bros. are sent to prison to do hard labor, Ma Doltish finds her true calling as a professional wrestler and the Maltese Turtle (at least Raph suspects) finds a new life as a Las Vegas stage act.  Raphael then links arms with the cast of the comic (as well as Eastman and Laird) and tells everyone that life is one big game show with lousy prizes.  He suggests we all stop trying to win as many points as possible and enjoy the ride, as we’ll all have to face that big game show host in the sky, someday.

*This is the third and final installment in the TMNT Special series.  It was preceded by TMNT Special: The Haunted Pizza.

*The Hedden & McWeeney version of the Turtles previously appeared in TMNT (Vol. 1) #40.

Hedden & McWeeney get a lot of shit and they do deserve some of it.  “Spaced Out” is the most laborious grind to plow through in all of TMNT Volume 1.  That being said, they’re still excellent cartoonists with a great sense of layout, comic timing, kinetic energy and an eye for fitting in as many sight gags as possible per panel.  They’re GOOD at what they do… they're just best taken in small doses.

As with TMNT (Vol. 1) #34, “The Maltese Turtle” confines its story to a single one-shot.  As such, it’s much easier to digest than the three decompressed issues of “Spaced Out”.  The joke doesn’t wear itself out and the story lasts as long as it needs to.  Is it anywhere close to proper characterization for ANYBODY?  Absolutely not.  But as a weird, surreal one-off change of pace, it’s amusing in its novelty.

The basic story is pretty weak and it’s more a catalyst for the manic cartooning style of the duo, not a tale to get invested in.  Hedden & McWeeney resort to a lot of dull shtick that went stale 40 years ago, but it’s all in the visual execution of the gags that make them fun to read.  They have a MAD Magazine style in which they load each and every panel with as many non sequitur gags as possible and it can be fun to digest every page and search for all the Easter eggs.

At 42 pages (the prologue and the epilogue are printed on the interior cover pages), “The Maltese Turtle” doesn’t overstay its welcome.  It’s more amusing than it is funny, I think, but there’s no denying Hedden & McWeeney are good at what they do.  They weren’t exactly the best fit for Teenage Mutant Ninja Turtles, so even with this story safely quarantined to the TMNT Special series, some folks might be inclined to ignore it or eschew it.  Still, so far as Hedden & McWeeney stuff is concerned, it’s “not that bad”.  And that’s about as high a compliment as you’ll ever hear for their work on the title.

Grade: C (as in, “Can’t say I really laughed, but I will admit that their caricatures of Eastman and Laird are practically photo accurate”.) 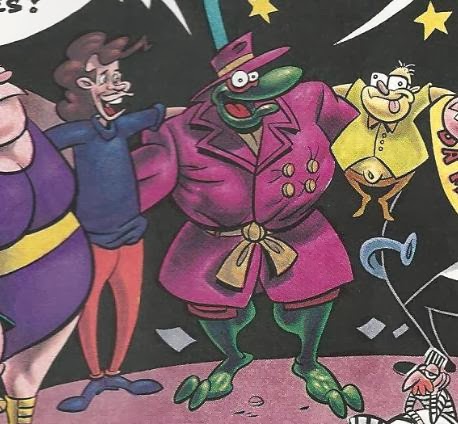