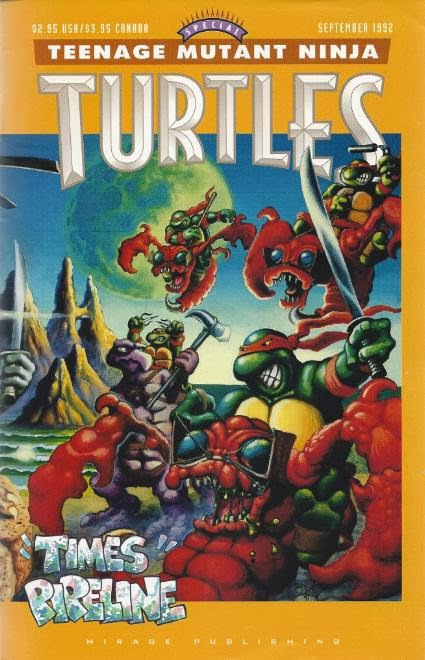 In the Time Tower, somewhere remote, the elderly worm-man 5 Ply is getting a lecture from his Doom Marble, warning him that his next payment to the bank is dangerously close to being past due.  Desperate for cash, 5 Ply uses his high-tech devices to transport his business cards across time and space.

Down in the lair, Donatello opens the TMNT’s mail box and amidst their various bills for sewage services, he finds the business card.  The other Turtles gather around as a hologram of 5 Ply appears from the card, offering "chrono adventure" for a nominal fee.  Thinking it’s a prank, the Turtles follow the instructions on the back of the card, bending it 3 times and saying “there’s no time like now”. 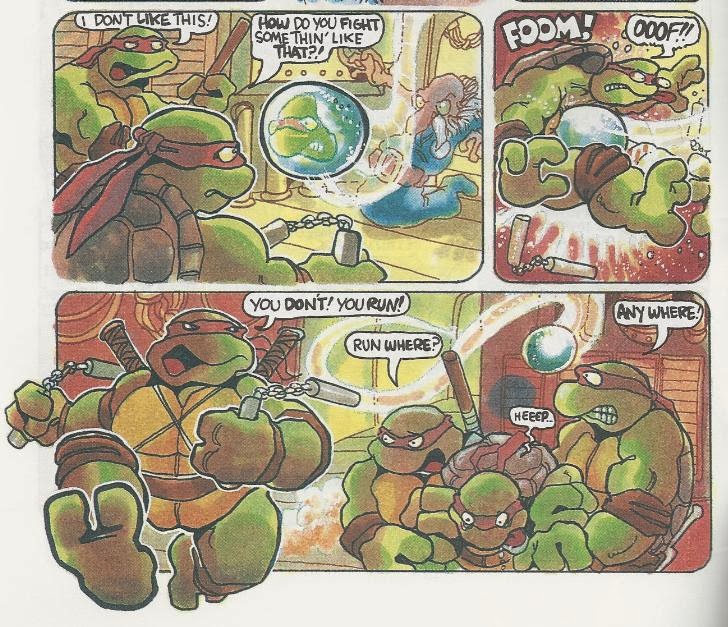 They find themselves suddenly teleported to the Time Tower’s waiting room.  5 Ply steps in to greet his new customers, but is frightened by their weapons.  He sics the Doom Marble on the Turtles which sends them running.  They hide in what they think is a vault, but is actually a “trans time dump port”.  The dump port activates, sending them and a payload of supplies across time and space to one of 5 Ply’s customers.

The Turtles wind up in a fortress with a weird side effect of the teleportation: Their beaks now have lizard-like flaps.  The fortress is under siege from flying lobsters called Fly Flowers.  The resident army (weird lizard people) are defending the fortress from the Fly Flowers with machineguns, though they’re low on ammo (they were expecting a shipment from their supplier).  The Turtles cut their way through the Fly Flowers and escape the fortress, disappearing into the dense jungle.

Camping out for the night, they discuss how they’re going to get home.  The business card trick isn’t working anymore and they suspect they need to be in close proximity to some of 5 Ply’s tech to jumpstart it again.  In the morning, they’re awoken by the sound of machines and squealing.  They see some of the lizard-people from the fortress capturing dinosaur-like creatures called Ground Pounders and funneling them through a series of meat grinders, which teleport the meat away to who-knows-where.

They help one of the Ground Pounders escape and it leads them back to the fortress, where they and several bird-like and frog-like soldiers are laying siege, trying to steal the supplies 5 Ply teleported in with the TMNT.  The soldiers at first don’t trust the Turtles until they see the enemy shooting at them, too.  One of the commanders agrees to take them back to camp and leads them to a river raft.  They use their trained Fly Flowers to take down the enemy helicopters and after navigating some rapids, they arrive safely at the camp. 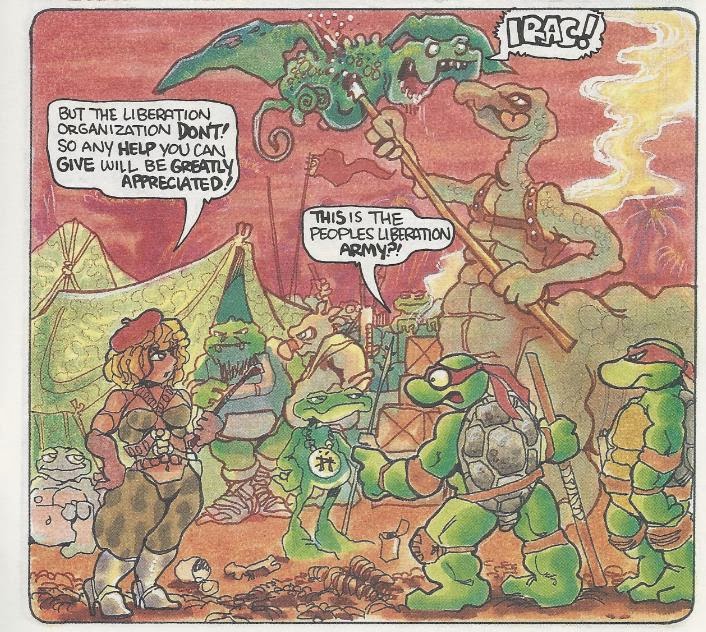 The Turtles are met by a human woman named Rosie Radiator, leader of the resistance.  Rosie explains that she’s from the future and has rallied a group of locals to rebel against the aggressors of Fort Time Piper, who have also come from the future.  It seems the invaders intend to poach lifeforms from the past, grind them up and sell their meat to fast food restaurants in the future.  This, of course, is wreaking havoc with the timestream, so the People’s Liberation Organization of Nicky Poo (P.L.O.P.) has sent her to stop them.  The Turtles explain that they were teleported with that supply shipment and have been inside the fortress.  Rosie figures they can use that knowledge to their advantage and storm the fortress.  Leo, Don and Mike saddle up on some Fly Flowers, while Raph gets acquainted with an armored Ground Pounder.

The next morning, the Turtles on the Fly Flowers swoop in on the highest tower of the fortress and drop in.  They’re attacked by the hulking caveman Stump Foot, who proceeds to clean their clocks.  Things look bad until Raph arrives with his Ground Pounder, who plucks Stump Foot up and hurls him away.  The Turtles make their way through the fortress until they find the time transmat room.  Don can’t figure out the controls, which is bad, as the commanders of Fort Time Piper, Woofer and Groat Gladder, show up with a furious Stump Foot behind them.  The Turtles decide to give the business card one last try and it teleports them away in the nick of time. 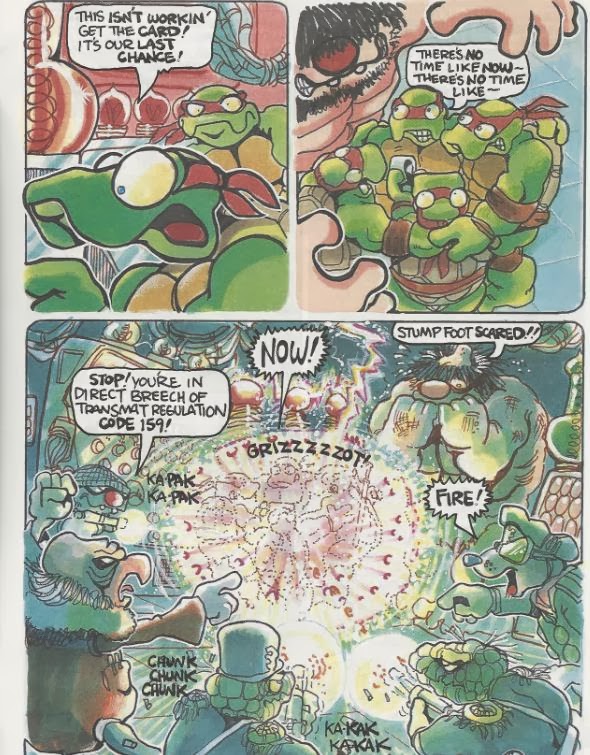 They arrive back in the waiting room of the Time Tower, where 5 Ply appears before them.  5 Ply insists on payment for their “chrono adventure”.  The Turtles explain that they’re broke, so 5 Ply teleports them back home… where they land in April’s bathtub.

Epilogue: Rosie and her forces have taken the fortress and won the battle.  Rosie laments that she’ll never get to see the Turtles again, as they were excellent soldiers.  Suddenly, several Ground Pounders come stomping through wearing bandanas over their eyes and screaming “Cowabunga!”  Rosie feels less wistful, all of a sudden.

*This issue was dedicated to the memory of Mark Bode’s father and famous cartoonist Vaughn Bode’.  Kevin Eastman had previously expressed his respect for Vaughn Bode’s contributions to the medium in the short strip “Fun With Guns”.

*Just so everybody knows, Vaughn Bode's official cause of death was "autoerotic asphyxiation".  The man was truly an inspiration to us all.

Before I get into my review of “Times Pipline”: Some background.

Mirage was under criticism in the early ‘90s after subjecting their main Teenage Mutant Ninja Turtles book to the “guest era” (which I’ve talked about at length).  Compromising with their critics, Eastman and Laird restored the main TMNT ongoing series to its original continuity, promising no more non-canon guest stories.  However, to appease those that DID enjoy the weird, surreal guest issues, they initiated the TMNT Special series: Out-of-continuity one-shots from the same contributors who worked on the “guest era” of TMNT Vol. 1.

The “restored to continuity” TMNT ongoing continued for 18 more issues, while the TMNT Special series floundered after only 3 issues, which might give you an idea as to what the majority readership was more interested in.

“Times Pipeline” from Mark Bode’ was the first of the three TMNT Specials and man, is it ever a slog to get through.  Clocking in at 41 pages, this thing is so long it actually runs out of page space at the end.  The epilogue has to be printed on the inside of the back cover just to find some room!  This thing is long, yet doesn’t feel like it makes the most of its space.  Despite the generous length, the narrative is in a hurry to get from one place to the next and all important story elements are spewed out in awkward exposition rather than allowed to occur naturally.  It boils down to the Turtles running around from one zany predicament to another, making inane commentary all the while, with the actual plot elements necessary to tie it all together being thrown in as an afterthought.

I enjoy Mark Bode’s cartooning; he’s one of the better guest artists Mirage infrequently brought on back in the day, at least when it comes to these silly, surreal adventures.  His cartooning is great, but his storytelling and script-writing are another matter altogether.  I often wonder if he even has a script laid out before he works, or if he just keeps it all “in his head” as he goes along, page by page.  I’ve already talked about the poor pacing of this story and how it actually runs out of room at the end, which just screams “poor planning”.

But then there’s his dialogue, which I have NEVER liked.  The commentary feels captioned into the art and rarely does anyone look or sound like they’re having an organic conversation.  Bode’ also suffers from what most of the guest contributors to TMNT suffered from back in the day, in that he doesn’t seem aware that the Turtles have unique voices or personalities.  All four Turtles talk in the same interchangeable slang and aside from Don trying to figure out the time transmat controls at the end, none of the characters display any, well, character.  So you end up with all the Turtles talking with these weird contractions and vulgarities, like Don saying “Eh?  What’s dis?” or “Quitchyer’ bitchin’!”

Bode’ tries to keep things energetic and weird and goofy, but it’s hard to feel any of those sensations when the lead characters are all so interchangeable and bland.

This special was dedicated to Mark Bode’s father, Vaughn Bode’.  I have no real experience with any of Vaughn Bode’s stuff, like “Cheech Wizard” or what have you.  I’ve seen the Ralph Bakshi flick “Wizards” several times and quite enjoy it, though I honestly don’t know how much of a hand Bode’ had in that movie beyond character designs or if it was even an adaptation of any of his work.  Still, I understand he was one of the more popular underground cartoonists of his day and many folks cite him as an inspiration.

The Turtles taking on “weird lizard-flaps” seems to have been a direct reference to Vaughn Bode’s art style (just superficially skimming his work, he used those “flaps” on quite a few characters).  It would have been a cute gesture, if only the TMNT would have stopped commenting on them throughout the length of the comic (again with that “captioned” dialogue).

So yeah, I’m not a big fan of this Special.  Mark Bode’s art is nice and this is probably the best coloring from Bill Fitts I’ve ever seen. That aside, it’s a real grind to read through.  Knowing how badly the TMNT Specials failed, I often get the feeling that the only reason people read these silly guest stories back in the day was because they were part of the ongoing and they "had" to.  Once these things separated from the main title, all interest in them apparently vanished..

Grade: D (as in, “Don’t know how many of these characters are taken directly from Vaughn Bode’s comics, and I just can’t be bothered to look it up”.)
Posted by TMNT Entity at 1:47 PM