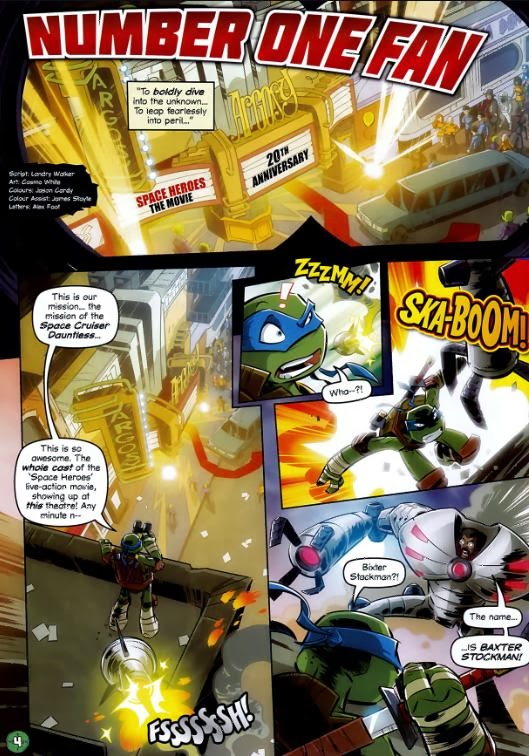 It’s the 20th anniversary screening of the live-action “Space Heroes: The Motion Picture” and Leonardo has camped out on a rooftop overlooking the theater.  He intends to watch all the aged cast members as they exit their limos and enter the theater and completely nerd the hell out.  Tragically, his evening of fanboy idol worship is ruined when Baxter Stockman shows up wearing his StockmanPod armor. 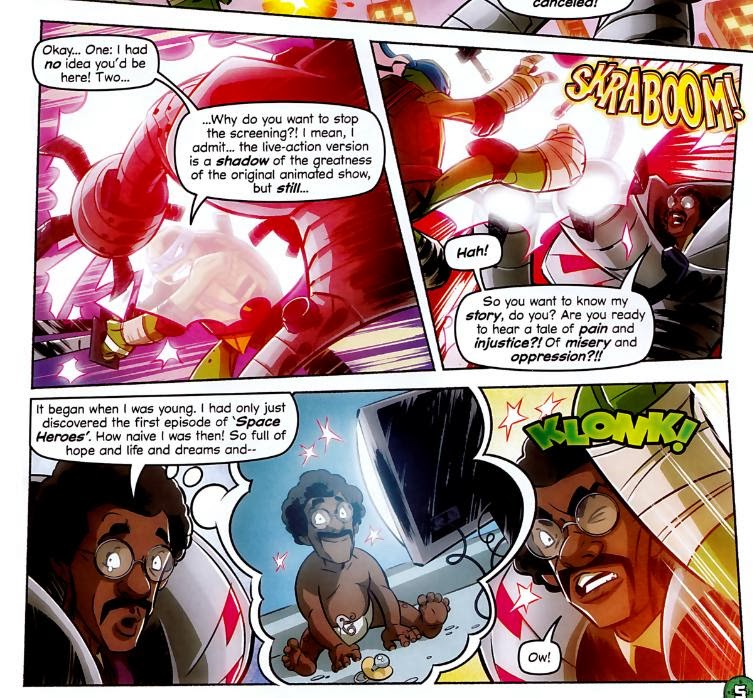 Leo and Baxter start going at it and Leo asks exactly why Baxter hates “Space Heroes” enough to want to ruin the screening.  Baxter reveals that he doesn’t hate “Space Heroes”, he LOVES “Space Heroes”.  He’s just upset that he wasn’t able to get tickets before they sold out.  In fact, Baxter even states that he’s the Number One Fan of the franchise… a claim Leo immediately contests.  Baxter then challenges Leo to a “Space Heroes Trivia Contest… of DOOM!”

The two super-dorks begin trading vicious blows, punctuating each attack with a suitably obscure “Space Heroes” trivia question.  Both fanboys parry the attacks AND answer the questions without missing a beat.  Meanwhile, on the ground, the fans waiting in line for the screening see “a green alien” battling “a giant robot”.  They laugh at the two wannabe “Space Heroes” nerds, who they think got the events of “Space Heroes: The Motion Picture” mixed up with “Space Heroes III”.  Pffft.  Posers.

The battle wages on for hours until both Leo and Baxter collapse, completely exhausted.  Baxter concedes that maybe, just maybe, Leo qualifies as a “true fan”.  Suddenly, it dawns on them just how long they’ve been fighting and they realize the screening is over and done with.  Leonardo missed his chance to see the cast in real life and Baxter missed his chance to ruin the festivities. 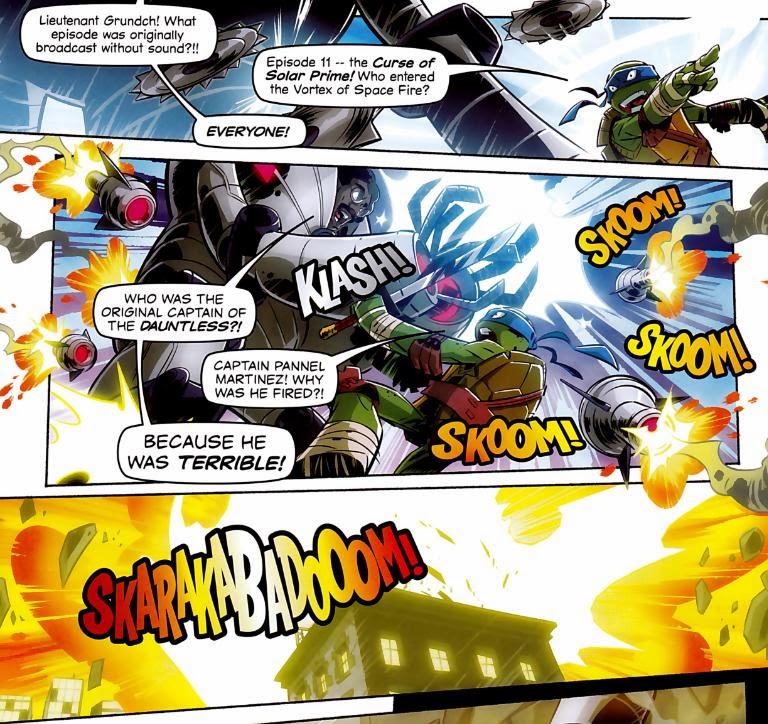 Baxter quotes a line from the TV series about “space revenge” and then blasts off on his rocket boots, continuing to declare himself the winner and Number One Fan.  Not looking where he’s going, Baxter crashes into a billboard.  Leo shakes his head, delivers a quote from episode 93 and declares the game over.

*This story follows TMNT Magazine (Panini) #9.  The next story in sequence is “The Art of Camouflage”.

This is the most inspired and entertaining comic based on the Nickelodeon TMNT cartoon I’ve read so far; IDW’s and Panini’s output combined.  Walker’s script is one of those “it’s so crazy, it just might work” scenarios and guess what?  It totally works.

Leonardo’s affection for “Space Heroes” has been one of the best gimmicks to come out of the Nick cartoon and one Panini so far has had no trouble in mining for humor.  Walker goes all out with this story, as the traditionally milquetoast leader in blue competes for Alpha Nerd status against Poindexter Stockman.  It’s basically what would happen if an internet message board argument could be waged with super powers and it is gloriously ridiculous.

And there’s this great underlying subtext to the story, too.  I hate it when fanboys play the “no true fan…” card and try to be exclusionary with their hobby/obsession.  It’s not helping anybody and to outsiders it just looks like you’re “coming in first at the Special Olympics”, as they say.  It’s embarrassing.  More than that, it sucks all the joy out of the media they profess to love and turns it into a bitter competition.  Walker encapsulates that outcome so well, as both Leo and Baxter miss out of the screening because they couldn’t stop measuring their nerd-boners.

When you compete for Alpha Nerd, nobody wins.

And there are lots of great little gags thrown in, as Walker gets each character’s voice and reaction down flawlessly.  Baxter tries to launch into one of his sob stories about his childhood and Leo snaps him out of it because jeez, we only have 7 pages.  As they do battle, their trivia answers get less and less detailed as they become more enraged with one another, creating this great sense of escalation to the action.  And man, I just love that bit where the crowd looks up, sees them fighting and then laughs Leo and Baxter off as “posers” because they seemingly got their cosplay wrong.

Cosmo White returns to the art duties and I love how dynamic and epic he makes the action sequences look.  He stages the battle like this is another “fate of the world” kind of situation (melodramatic lightning bolts flashing in the background, intense angles of perspective, etc), when in reality it’s just two dorks trading minutia back and forth.  It really adds to the comedy of the whole thing.

So yeah.  Best story Panini has published so far and, well, it’s actually more fun than any of the IDW issues I’ve read so far, too (and I’ve liked those quite a bit, don’t get me wrong).  Excellent work all around.