The Art of Camouflage 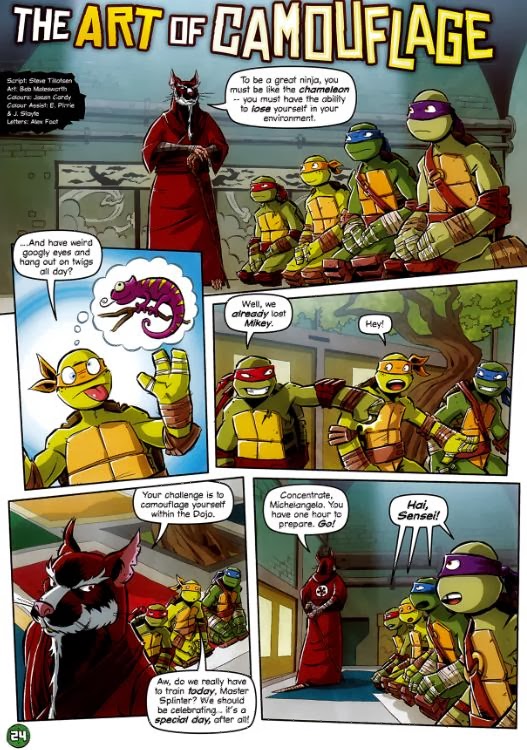 “The Art of Camouflage”

In the dojo, Splinter prepares the Turtles for a lesson in camouflage, as a ninja must be able to thoroughly conceal himself.  Mikey whines that they shouldn’t be training on such a special day, but Splinter silences him and tells his sons they have one hour to prepare.

An hour later, Splinter begins his hunt around the lair.  With a flashlight, he immediately spots Raphael, who is painted like bricks and standing flush against a shadowy part of the wall.  Splinter compliments him on his ability to stay concealed in the shadows, but warns him that his camouflage will become useless the moment someone turns on the lights.

Rather than hide, Donatello comes marching out to show Splinter his latest camouflage-related invention.  The device projects images over his whole body, thus rendering him “invisible”.  Splinter is impressed until the device starts selecting images from Don’s “April” folder, plastering the Turtle in photos of their friend.  Splinter compliments him on his ingenuity, but warns that he should not be so reliant on technology. 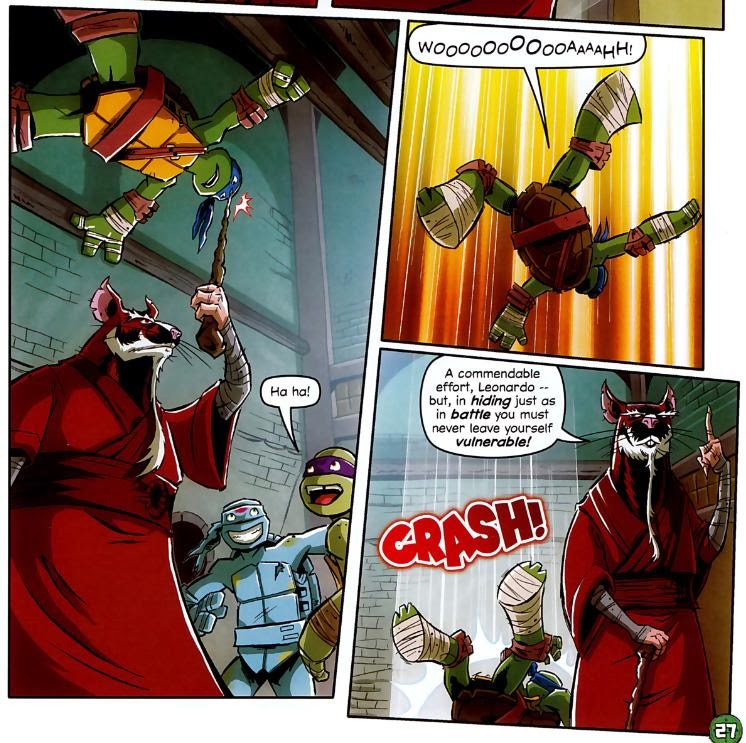 Next, Splinter finds Leonardo hiding in the rafters above.  Leo has his arms and legs splayed out, bracing himself tightly between the beams.  Splinter pokes him once in the head with his stick and Leo comes falling down.  Splinter compliments him on his exertion of effort, but warns that even when hiding, he should never leave himself vulnerable to attack.

Lastly is Michelangelo, who comes waltzing into the living room wearing a pinstripe suit, glasses and a false moustache.  Mikey introduces himself as “Maurice Turtleman”.  Splinter informs Mikey that he may have missed the point of the exercise.  With the lesson over, Splinter dismisses his sons for the day. 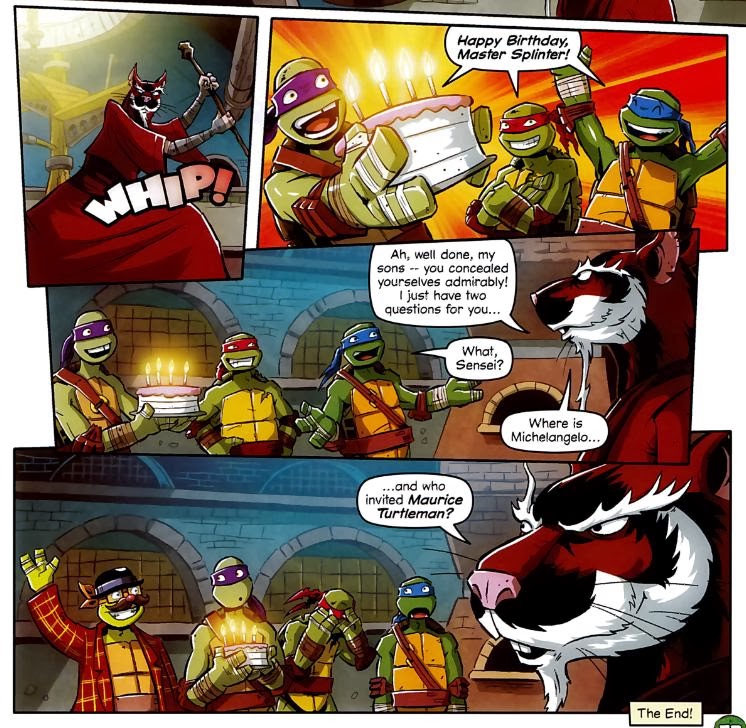 Some while later, Splinter returns to the living room to find it completely empty.  He suspects his sons are around, but can’t find them.  The Turtles successfully sneak up on him with a birthday cake and yell, “Surprise!”  Splinter thanks them for the birthday celebration and compliments his sons on improving their concealment skills.

*This story is continued from “Number One Fan”.  The story continues in TMNT Magazine (Panini) #11.

“The Art of Camouflage” is a cute story and it was fun to see Splinter find each Turtle, then offer them compliments and criticisms on their technique.  Well, each Turtle except Mikey.  It might have been nice to see if he could have used any of his skills to come up with something creative, but nah, it was just a dumb joke at the expense of his stupidity and utter uselessness.  Hrm.

Beyond the neat gimmick and the ending with Splinter’s surprise party (a good way of tying it all together), this one’s pretty low key in terms of humor and art.  No gut-busters, here.  Molesworth’s characters look stiffer than usual and some of the layouts look pretty rough (especially Don’s near-identical posing between the first panel and the second-to-last panel on page 26).  A few pages have some energy to them, such as page 27 when Splinter finds Leo, but this particular comic is just a bit blander looking than Panini typically puts out.

“The Art of Camouflage” is the lesser of the two strips published in this issue, but it does have its moments and I liked the premise.  It just could have benefited from something better for Mikey to do than embarrass himself and a bit more energy in the layouts.