What Happened to the "Teenage" in "Teenage Mutant Ninja Turtles"? 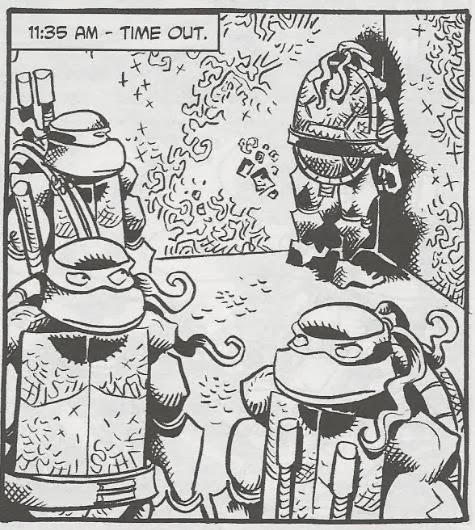 Have you ever noticed that the Teenage Mutant Ninja Turtles are rarely ever depicted as… teenagers?  I mean, it’s right there in the title so it ought to be a hard thing to overlook.  But by and large, that first “T” in “TMNT” is generally excluded from their portrayals.

When Eastman and Laird first published TMNT (Vol. 1) #1, it was as a one-shot parody of popular comic book trends over at Marvel and DC.  Daredevil is the most obvious: 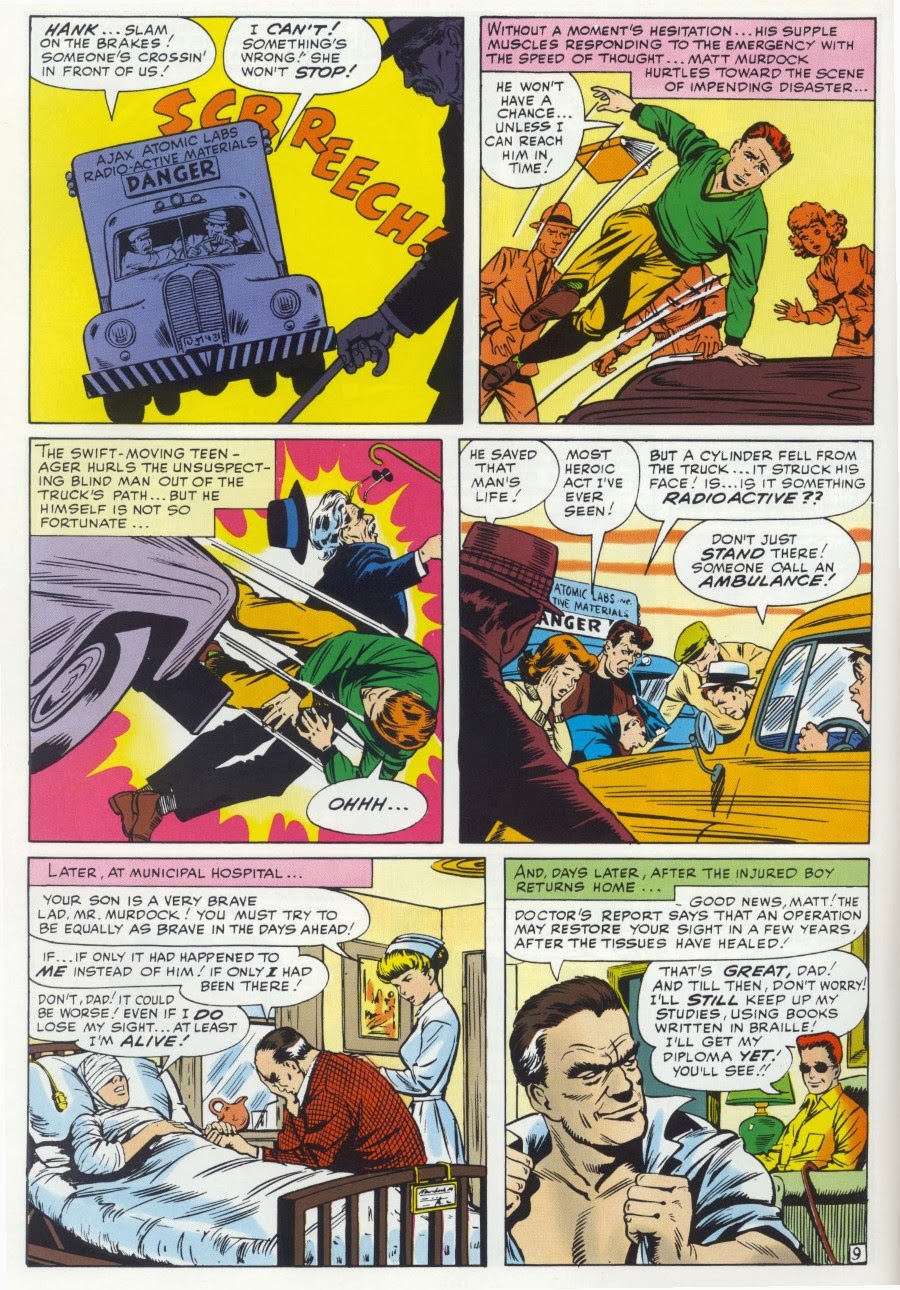 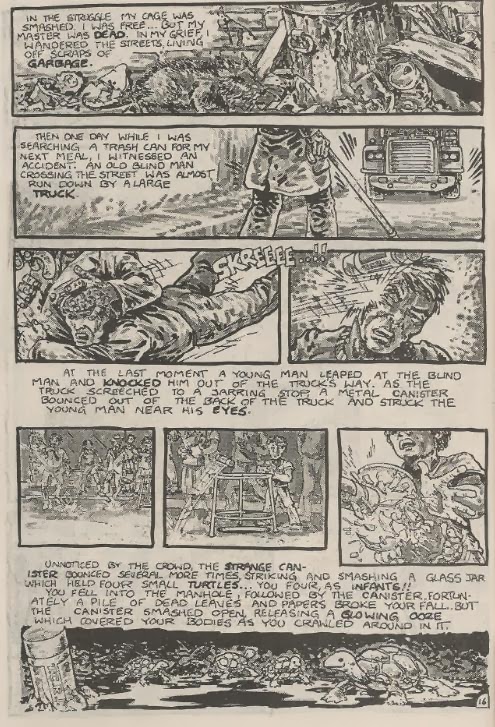 But the “Teenage Mutant” is in itself a parody of the popular teenage superhero team books of the early ‘80s, such as New Teen Titans and Uncanny X-Men (where the “mutant” is concerned, anyway, as the X-Men weren’t so much teenagers anymore by the early ‘80s).  As soon as Teenage Mutant Ninja Turtles blossomed from a parody one-shot into an ongoing series that could stand on its own, the entire “Teenage” quarter of the title became an artifact of the book’s satirical conception and not something genuinely applicable to the characters.

I mean, looking at those early issues, outside of perhaps Raphael’s anger management difficulties, the Turtles were never shown undergoing any typical, clichéd conflicts associated with teenagers.  They were cited as being around age 14-15 at the start of the book, but these were teenagers in name only.  The Turtles didn’t have problems with school or girls or part time jobs or peer pressure or any of that other crap and, save perhaps Michelangelo, they all acted like miniature adults (and judging by the insane cut of their musculature, looked like miniature adults, too).

Obviously, the lack of those familiar teenage-related storylines is a necessity due to their being “freaks” and “outcasts”, but it goes beyond that.  Nobody they met ever treated them as teenagers upon interacting with them.  When April O’Neil meets the Turtles, she never once views them as teenagers and regards them as adults from the get-go.  Here she is in TMNT (Vol. 1) #3, fetching them beers from the kitchen: 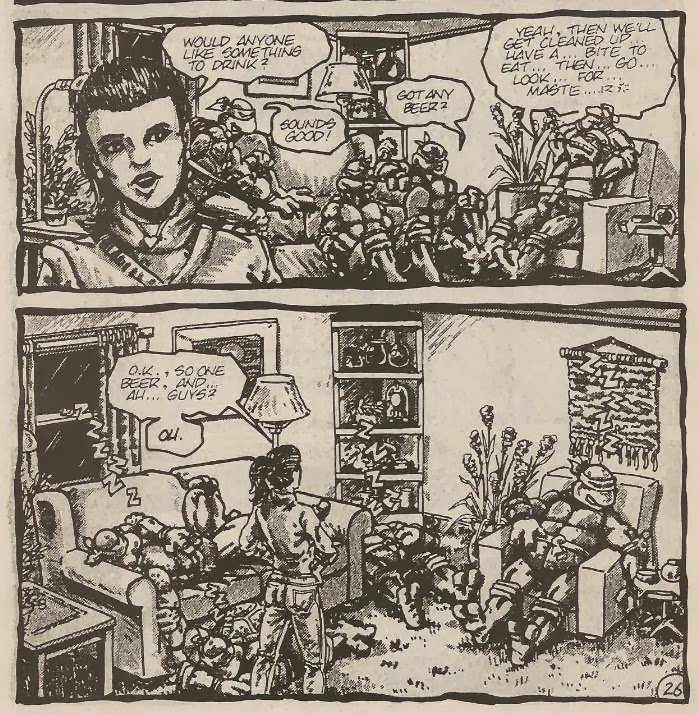 By TMNT (Vol. 1) #5, the Turtles were hanging out at bars (albeit alien bars, which I guess don’t card): 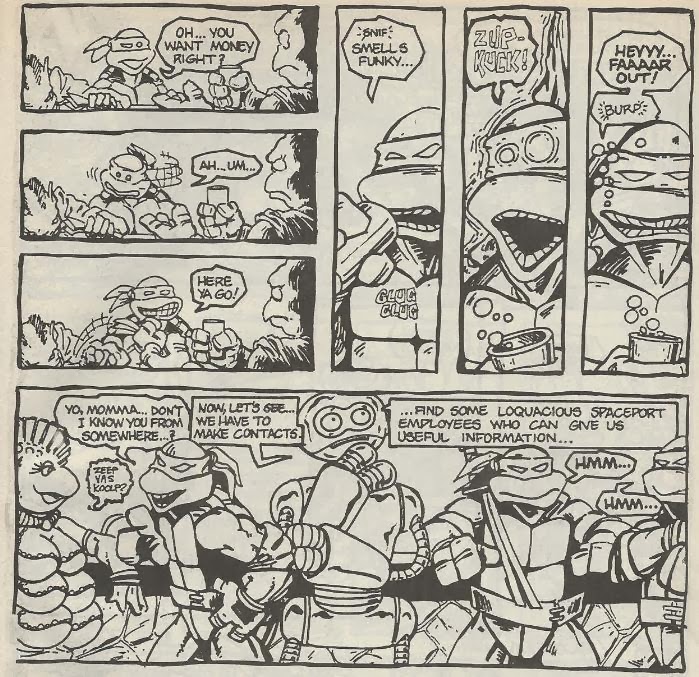 It seems Eastman and Laird, in those early stories anyway, never had much of an intention of portraying the Teenage Mutant Ninja Turtles as teenagers.  The “teenagers in name only” quality was built into the characters from their conception and it’s been a staple in nearly all their adaptations.

The Fred Wolf animated series from 1987 went a step further and eliminated the “family” dynamic of the characters altogether.  The Turtles were just “buddies” who roomed together, while Splinter was their sensei and nothing more. 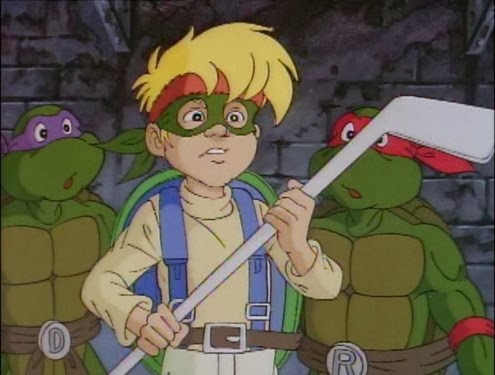 They hung out in the lair all day, eating pizza and goofing off and with nothing to really associate them with what we think of as teenagers except for maybe an overall lack of maturity.  Heck, by the third season the show introduced a teenage sidekick for the gang: Zach.  The character was supposed to be 13, but he ACTED like a little kid and the Turtles, who were supposed to also be teenagers only a couple years older than Zach, regarded him as a child, too.

Fast forward to the 4Kids animated series from 2003 and we see much the same thing.  Although their family dynamic was restored, there was still little to connect them with being teenagers.  They still hung out with adults like April and Casey, which in itself could become a little weird and problematic.  You have the Turtles, 15, treating Casey, 23, as a bumbling tagalong.  All of a sudden the adult character is the sidekick to the teenage characters, who constantly regard him with sighs of exasperation or bemusement.  I mean, it doesn’t help that the 4Kids cartoon had one of the worst depictions of Casey Jones in any adaptation, but the point is that the 23 year-old characters were peers to the 15 year-old characters at best (April) or their worthless comic relief fuckup hanger-ons at worst (Casey).

Also, the Turtles in that cartoon were friggin’ jacked for 15: 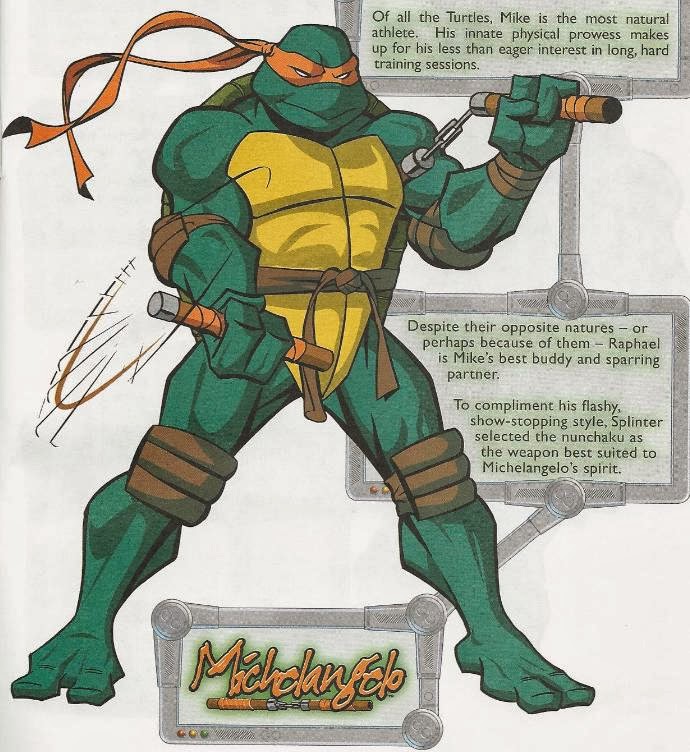 And then there’s the Nick cartoon.

When the Nickelodeon animated series from 2012 began, there were some folks upset that the Teenage Mutant Ninja Turtles and their supporting cast were being portrayed like, uh, teenagers.  All of a sudden April and Casey were made into genuine peers of the TMNT who attended high school and could invite that sort of setting to the formula.  Donatello now had a crush on April and had to deal with his own “girl troubles” because surprise-surprise, teenagers have libidos.  Raphael’s anger management now became melodramatic temper tantrums with a tinge of juvenile angst.  Michelangelo now had trouble making friends because he was weird-looking and unpopular.  Leonardo is now a more light-hearted, unsure and kind of crappy leader, but only because he’s so young and is still learning the ropes of the position.  Splinter now GROUNDS the Turtles when they disobey him and sends them to their rooms to cool off.

And when all this happened it felt… weird.  For the first time ever, someone actually noticed the word “Teenage” in the title “Teenage Mutant Ninja Turtles” and decided not to hand-wave it away.  And yet some people, even two years later, are still outraged and indignant at the idea of the Turtles being treated as teenagers just because it is so unusual for the property.  Ever since the beginning, the Turtles have been “teenagers” who swill beer, hang with adults, take their motorcycles on cross-country road trips and generally don’t do anything we associate with teenagers. 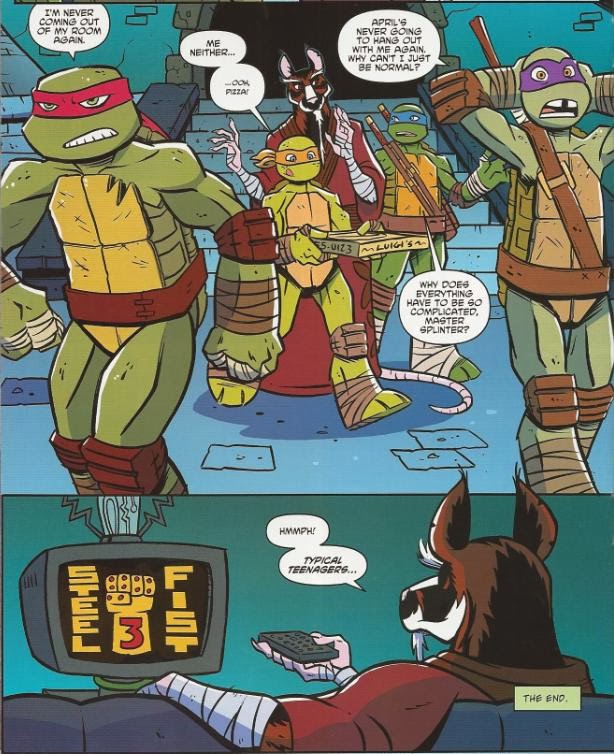 I really like the Nickelodeon cartoon and the emphasis on “Teenage” is a major reason for that.  It took nearly 30 years for an adaptation to treat the characters in this manner and it’s a welcome diversion from the usual stuff we’d been getting.  And if you step back, doesn’t it seem just a little bizarre that when the Teenage Mutant Ninja Turtles are treated as teenagers it seems “off” or at least “unique”?

The current TMNT comic from IDW hasn’t put much emphasis on their being teenagers, despite probably being the closest the Turtles have ever been connected to human teenage traits (having actually BEEN human teenagers before getting reincarnated as turtles, but that’s complicated).  IDW’s rotating artists tend to draw the Turtles wildly differently, too.

Andy Kuhn draws them as gargantuan roid-raging tanks to emphasize their physical prowess: 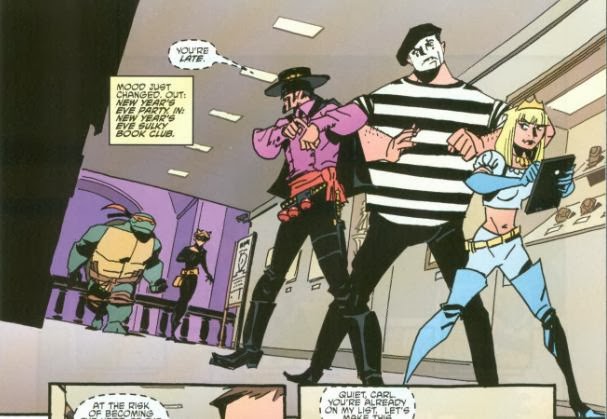 Meanwhile, artist Ross Campbell opts to emphasize their youth.  His Turtles are smaller, skinnier and generally softer in countenance: 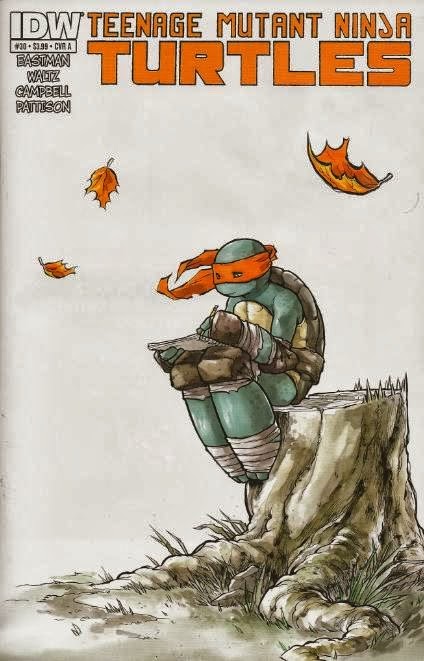 But the freedom of artistic interpretation has always been one of the better aspects of the TMNT comics over the years, whether they be from Mirage, Archie or IDW.  Different artists find different ways to accentuate the traits of the characters and it can lead to some stellar interpretations.

And some not-so-stellar ones: 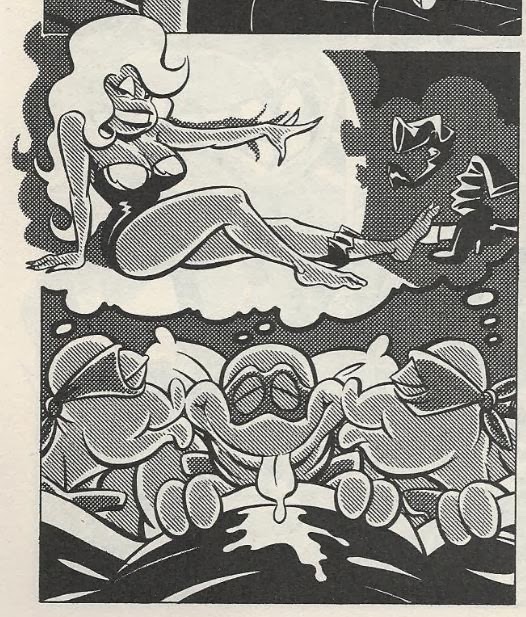 As for why the Turtles have rarely, until now, been portrayed as teenagers, fans are often quick to come up with their own explanations.  Rationalizations range from “their mutation makes them smarter than human teenagers so they don’t act like human teenagers” to “their unique upbringing made them grow up faster psychologically so they don’t exhibit typical immature teenage attitudes”.  There’s any number of excuses, feel free to take your pick or come up with your own; I won’t judge.

Like I said earlier, it seems like a holdover from when the characters were nothing but shallow Marvel/DC parodies, and even if the “Teenage” was no longer of concern, it couldn’t exactly be dropped from the brand name.  Hell, Peter Laird published an entire volume of Teenage Mutant Ninja Turtles where the title characters were in their mid-30s: 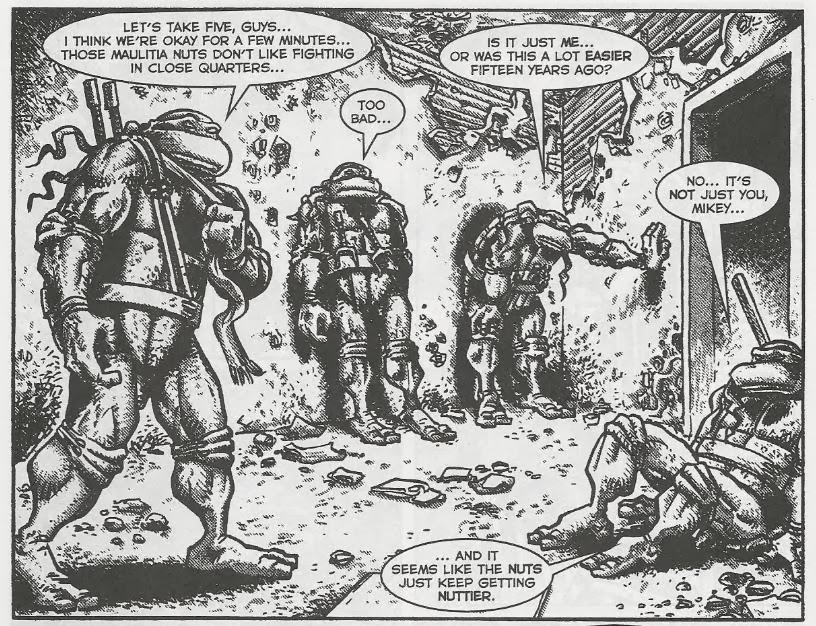 Anyway, if there was a point to this article, I guess it’s to discuss something I always felt was a little strange about the characters, but never really gave much thought until all the whining about the Turtles “acting like teenagers” in the 2012 cartoon.  We’ve become so accustomed to the Turtles acting like adults at age 15 that when they’re portrayed like typical teenagers, people think that it’s “wrong”.  And isn’t that just a little silly?