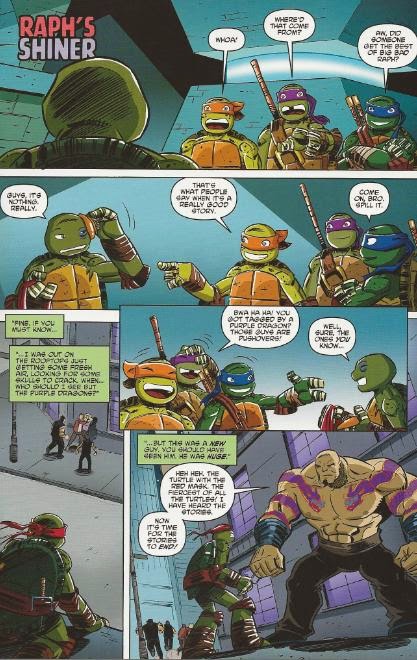 Down in the lair, Leo, Don and Mike walk in on Raph icing a black eye.  The Turtles ask him where he got the shiner and Raph begins spilling his yarn…

Raph is out looking for trouble when he spots a gang of Purple Dragons.  He takes out the small fish, but then a huge, lumbering Purple Dragon he’s never met before shows up.  The pair fight their way into a demolition site, where Raph judo-flips the thug onto a pile of debris.  Little does he know, buried in that debris is one of the missing ooze canisters .  The Purple Dragon promptly mutates into an… orange dragon. 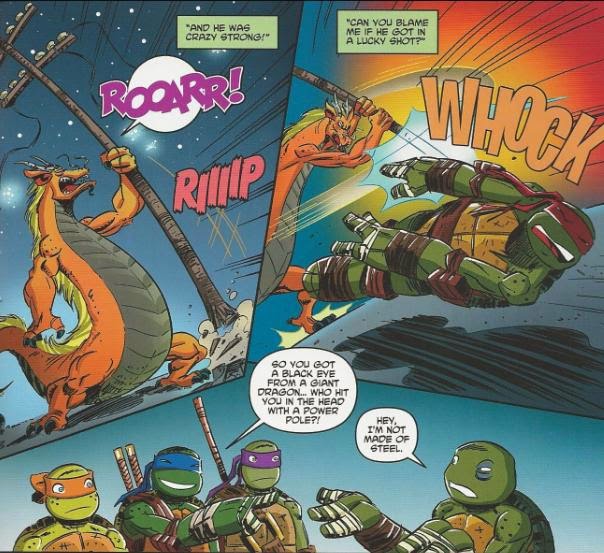 The dragon wallops Raph with a telephone pole, giving the Turtle a black eye.  Raph then runs to a wrecking ball crane, climbs inside and smashes the dragon with the ball.  The dragon crashes into the condemned building, toppling the whole thing down on itself.

Back in reality, the Turtles ask Raph how he could possibly think they’d be stupid enough to buy such a ludicrous story.  April then comes running in and tells the Turtles how during sparring practice, she actually managed to land a hit on Raphael square in the face.

*This story is continued from “Metalhead Games”.  The story continues in TMNT New Animated Adventures #10.

*Unfortunately, this story is not about Raph befriending a little old man in a fez who drives around in a tiny automobile at parades.

*The ooze canisters were scattered all over New York City after the events of the season two episode “The Mutation Situation”.

I hope IDW does more of these little short tales in the back of TMNT New Animated Adventures.  While it does scale back the main feature by a few pages, looking back at the issues so far, I think a lot of them could have actually been a little shorter without any damage done to the narrative.  Short gag stories like these are fun and befitting of a kid’s comic.  They’re reminiscent of the format of Panini’s Nickelodeon TMNT magazine in the UK.

Byerly’s story is light but fun; like I said, it’s a gag strip.  The Turtles punching holes in the consistency of Raph’s yarn is the most amusing aspect, such as Don questioning how the Purple Dragon could mutate into an actual dragon without the necessary DNA or how Mikey of all Turtles points out the unlikelihood that a crane operator would leave their keys in the ignition.  Oddly, nobody mentions how the Purple Dragon turns into an orange dragon, but that may just have been Brizuela having some fun with the colors even if the dialogue never makes light of the counterintuitive color scheme.

The last panel is sort of awkward, though.  It ends with the Turtles all congratulating Raph for helping April spar rather than mock him for getting hit by a girl.  Maybe it was Brizuela’s layouts, but it almost felt like a public service announcement and not a parting joke.  “And kids, you should never feel ashamed about helping others, because helping others is the right thing to do.  Booyakasha!”

This was a fun bonus and I hope IDW keeps this format in the future.