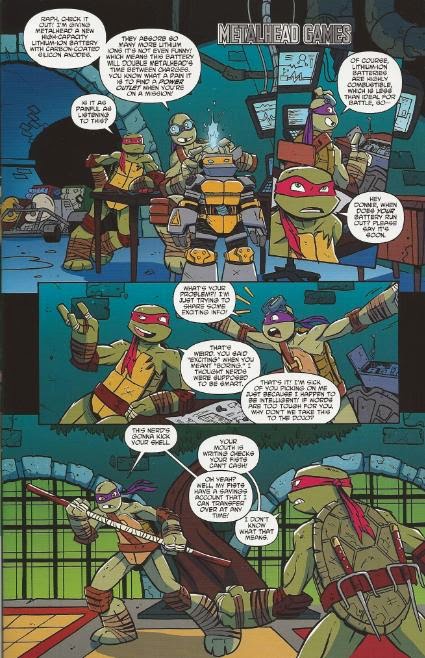 Down in the lair, Donatello is bragging to Raphael about the new (potentially unstable) lithium-ion battery upgrade he’s installing in Metalhead.  Raph proceeds to make fun of Don’s nerdiness, causing Don to challenge Raph to a sparring match.  They take it to the dojo, where Raph easily trashes the dork. 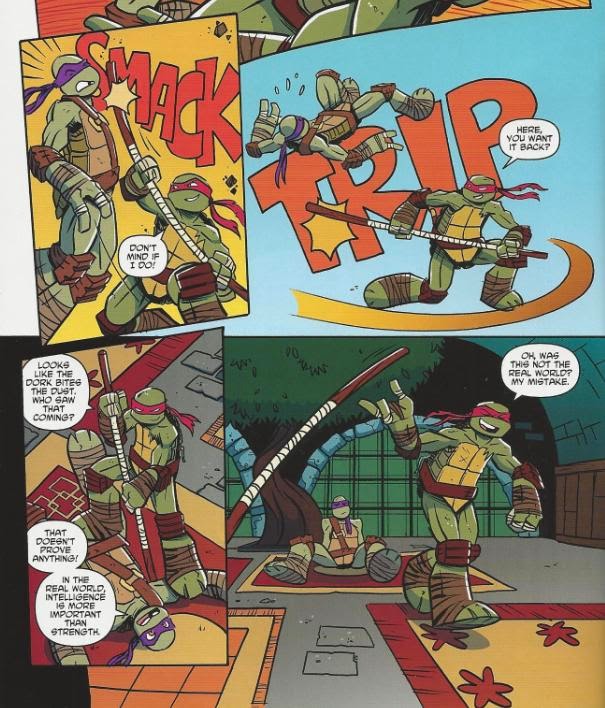 Later, as Raph brags about his victory to Leonardo and Michelangelo in the living room, Don comes screaming out of his lab.  He says that the Kraang have found a way to take control of Metalhead remotely and that the heavily armed robot is going bonkers.  Metalhead comes bursting out of the lab, beats everyone up and then flies out of a manhole cover via his rocket boosters.

The Turtles chase Metalhead to the New York Public Library where the battle escalates to the rooftop.  As Metalhead rains down laserfire, Raph begs for Don to use his book-smarts to find a clever way to stop the robot.  Don reveals that the entire fiasco was a prank orchestrated by himself and his brothers to teach Raph a lesson.  But AHA!  Raph knew it all along and secretly stole Metalhead’s remote from.  Raph intends to make Don beg for the remote back, when suddenly one of Metalhead’s rocket-punches destroys the remote.  Now REALLY out of control, Metalhead takes his aerial rampage to Times Square. 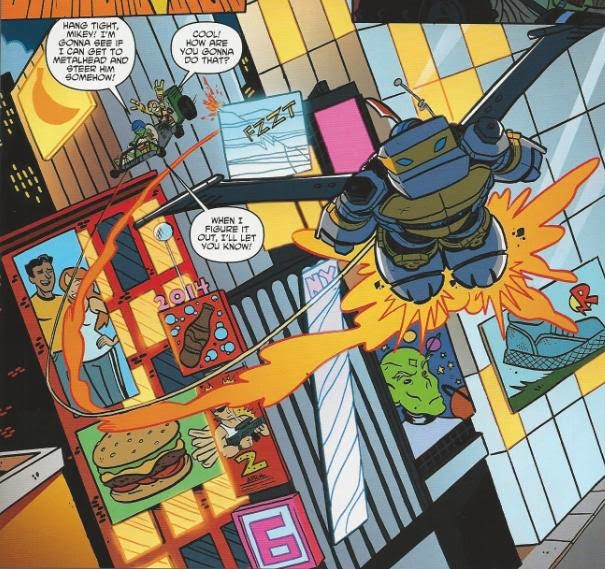 The Turtles hop into their go-cart buggy and give chase.  Leo and Mikey detach their half of the buggy and hit Metalhead with a grappling line.  Metalhead promptly lifts them up into the sky.  Raph and Don use their own grappling line to hoist themselves to the roof of One Times Square.  Raph admonishes Don for starting this whole mess just because he has to feel like he’s smarter than everybody.  Don explains that he’s never tried to make Raph feel dumb and apparently their whole melodrama was a big misunderstanding.

Coming up with a plan, Don and Raph work together to rewire the New Year’s Eve Ball.  They radio Leo and tell him to lure Metalhead over to One Times Square.  Leo and Mike disengage their buggy from the grappling line and land on an adjacent rooftop.  Metalhead turns around and flies after them, but gets the grappling line caught on the ball’s post.  Don flips the switch, electrifying the ball and channeling all the power into Metalhead.  His new lithium-ion battery overloads and fries his circuits, but it also overloads Manhattan’s power grid… plunging the city into darkness.  As police helicopters show up, the Turtles flee. Down in the lair, the Turtles watch Carlos Chiang O’Brien *click* Gambe’s report on the blackout.  The reporter suspects it was another attack from “the aliens” and the Turtles are happy with that cover.  Don and Raph inform Splinter about the lesson they learned in brotherly cooperation, but Splinter punishes them with 200 push-ups, anyway.  Mikey proceeds to repurpose Metalhead into a water balloon-throwing machine.

*This story is continued from TMNT New Animated Adventures #8.  The story continues in the next segment, “Raph’s Shiner”.

*Obviously, this story has to take place prior to the season 2 episode “Metalhead Rewired”.

*The Kraang originally seized control of Metalhead in the season 1 episode “Metalhead”.

So it looks like IDW is dabbling in publishing multiple shorter length stories in each issue of New Animated Adventures.  If that’s where they’re going with the series, I’m all in favor.  With any luck, maybe we’ll get some of those great Nickelodeon TMNT comics from Panini published in the US.  It’s a longshot, but I’ve got my fingers crossed.

At 16 pages, “Metalhead Games” isn’t really that short of a story, being only 4 pages lighter than a typical New Animated Adventures tale.  That said, I’m rather glad they cut it off a little early, as it wasn’t one of Byerly’s more creative plots and four more pages of Metalhead blandly firing lasers at cars would have grown tiresome.

Yeah, it’s not much of a story.  We’ve already seen Metalhead go crazy before in the cartoon and that’s really all we get in this comic.  It’s fun in a “flying by the seat of your pants” sort of way, but all it amounts to is a lot of dull action shtick.  The meat of the story is Don and Raph’s antagonistic relationship which in a way (probably coincidentally) calls back to Don and Casey’s showdown in the Mirage comic TMNT (Vol. 1) #49.  In that story, Casey angrily accuses Don of trying to talk down to everyone with his egghead routine and proceeds to tease and cajole the Turtle until he confronts Casey and they fight.  Of course, in that story Don prevails in battle and humbles Casey, whereas in this story Raphael handily puts the nerd in his place.

While this is obviously a much more innocent altercation (the Mirage fight involved the lingering guilt over child murder and the debilitating effects of alcoholism), it’s still interesting to see the same central idea played out in two different ways.  Here, Don and Raph come to a more saccharine understanding; a far more pleasant outcome than what Casey wound up having to go through after his falling out with the Turtles.

I talked about Chad Thomas’s art last time he filled in on the title, but to repeat myself: I like it.  He breaks model and his character posture looks less stiff than Brizuela’s .  I think his action layouts in this story were fine, but the script was too redundant to do him any favors.  You can only draw Metalhead flying around Times Square with a go-cart dangling behind him for so many pages before the visuals get repetitive.  Thomas's emotive take on the characters worked great in this issue, especially for Leo.  There’s just something amusing about seeing the leader character make bad decisions and look utterly horrified at their catastrophic outcome.

And lastly, in case you’ve never visited New York City, the New York Public Library actually IS adjacent to Times Square.  Like, practically just around the corner.  Yeah, last time I visited Manhattan that caught me pretty off-guard (also, Times Square is disappointingly small when you see it in person).  So hey, nice bit of geographic accuracy on Byerly’s part.

Grade: C (as in, “Can’t say I was ever much of a Tranzor Z fan, so the homage in Metalhead’s rocket-flying design doesn’t do anything for me.  Count DeCapito was a pretty cool villain if I remember correctly, though”.)
Posted by TMNT Entity at 6:36 PM