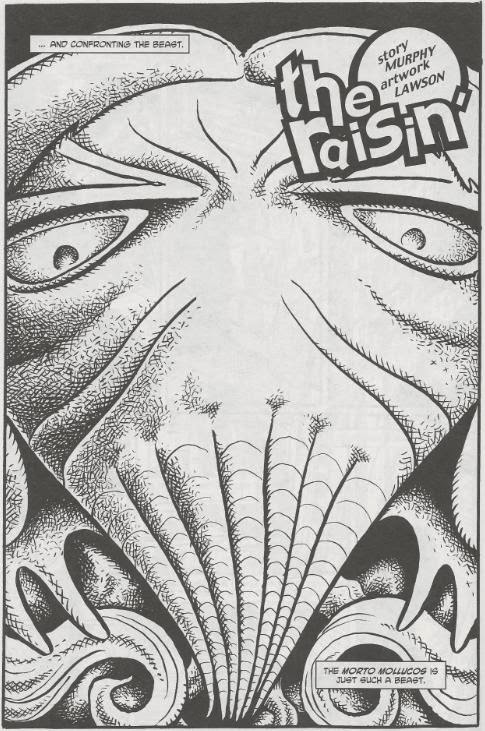 In the morgue of the Kurtzburg Memorial Hospital, a strange creature called the Morto Mollucos (aka the Lazarus Fly) pulls the corpse of Professor Obligado from its cabinet.  The Mollucos is an alien that can momentarily revive the dead by reactivating their memories.  The Mollucos then feeds on those memories for nourishment.  As it prefers Utrom memories, it is regarded as one of their most persistent predators.

Just as the Mollucos revives Obligado, the NYPD Xenosquad (the Police Captain, Sergeant Xitor and Detective Falina) comes barging into the morgue, having anticipated the creature’s plan.  Sergeant Xitor opens fire on the Mollucos while Obligado, in a state between life and death, mistakes the fluorescent lights as the gateway to the afterlife.  The weapons fail to harm the Mollucos, an alien that Sergeant Xitor seems to have a personal beef with.

Suddenly, a portal opens up in the room and several helmeted Utroms on hovercrafts come through.  They are the Utrom Preservi, a rogue faction of Utrom “memory preservers”.  Sergeant Xitor tries to shoot them, but they blast her in the torso with their more advanced weaponry, revealing her to be an Utrom. 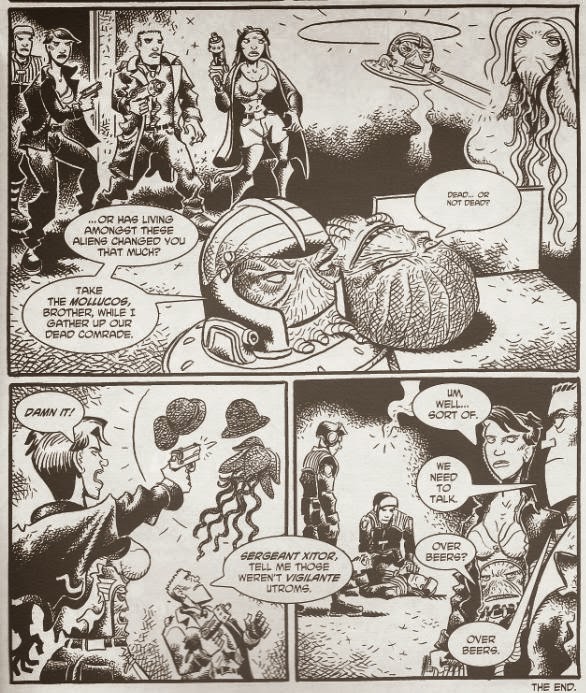 The Preservi subdue the Mollucos and take it as well as Obligado’s babbling corpse back through the portal, their “mission” proceeding on schedule.  Xitor is furious that she lost the Mollocus, Obligado AND the Preservi.  The Police Captain, on the other hand, is furious that Xitor never informed him that renegade groups of Utroms existed.  Xitor promises to get him up to speed… over some beers.

*This story is continued from “The Grape”.  The story continues in “The Risen”.

*The Police Captain and Detective Falina will return in Tales of the TMNT (Vol. 2) #58.

We’re still in what’s essentially the “prologue” stage of the Professor Obligado serial, establishing his death before we can get to the stories about his life.  To be honest, whenever I think about the Obligado serial, I actually remember this prologue section more than I do the bulk of the chapters (which are a series of bizarre adventures in outer space and other dimensions).

“The Raisin'” reminds me a bit of that Edgar Allen Poe story, “The Facts in the Case of M. Valdemar”.  Look, if you haven’t read it, just check out the Roger Corman movie “Tales of Terror” from 1962.  It has Vincent Price AND Basil Rathbone!  What more do you need?

Anyway, in that story a crooked hypnotist promises to alleviate a dying man’s suffering by putting him in a trance.  However, the trance lasts long after the man dies and he continues to remain partly conscious as his body rots in bed.  The sight of Obligado being brought back from the dead in a half-state of consciousness, as though he were in a trance, gave me flashbacks to my old high school reading.  It’s a good story; H.P. Lovecraft even recommended it in his essay “Supernatural Horror in Literature”.

Sergeant Xitor and the Police Captain made brief, unnamed cameos in the last installment of this serial. With their new, colorful identities as well as the more defined cast of the Xenosquad in group shots (rather than the generic policemen from last chapter), Murphy seemed to be trying to flesh them out as a recurring stable of personalities.

Ha ha.  No.  They make one more “substantial” appearance after this, as background fodder at the end of the Wild West C.O.W. Boys of Moo Mesa arc.

While the Xenosquad never really got to do much, I guess their existence qualifies as a case of world-building; showing us that there are a lot of diverse and interesting characters in this world whom we don’t have time to see much of.  Also, hey, the Kurtzburg Memorial Hospital.  I think this is the only time it gets referenced after it was introduced at the start of TMNT Volume 4, right?