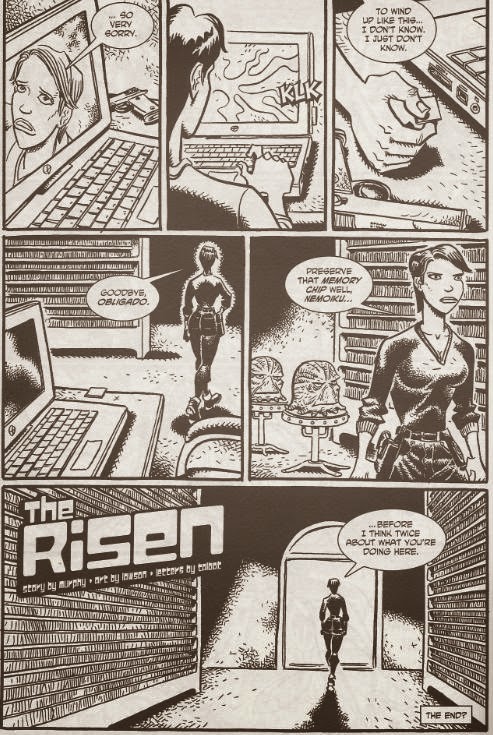 In the vaults of the Utromi Preservi, the Utrom Nemoiku is working on preserving the memories of Professor Obligado.  The Professor is still in a state between life and death, though his consciousness is fading rapidly.

Nemoiku offers to use his tools to allow Obligado to experience any memory from his lifetime, even those he could not normally access.  Obligado requests to remember his birth and early infancy and Nemoiku obliges.  Obligado recalls his mother and father and experiences great joy.  As he begins to lose his grip on life, he thanks Nemoiku.

Nemoiku preserves the last of Obligado’s memories just as the Professor slips away.  Obligado’s final words are that he feels like his existence will continue in some way and that he can see his own body. 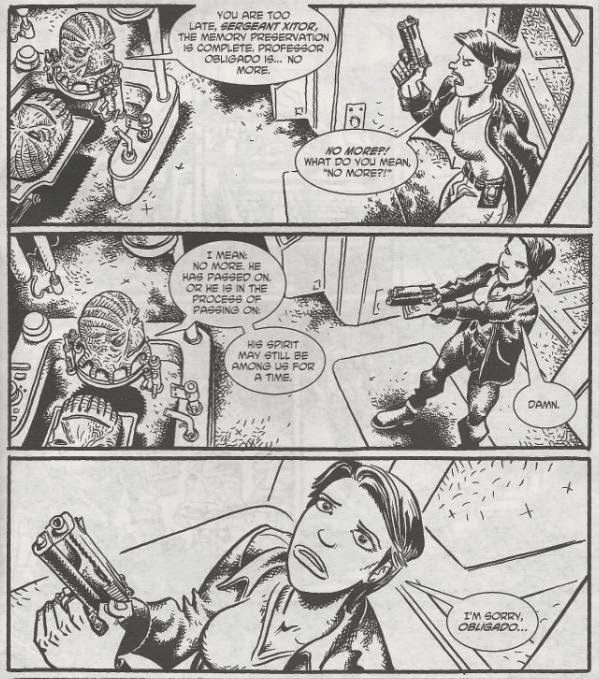 Sergeant Xitor then bursts into the vault and tells Nemoiku to step away from the Professor.  Nemoiku explains that she’s too late; Obligado’s memories have been preserved on a memory chip and the Professor has died, although his spirit may linger among them for a short while.

Xitor reviews the memory chip and witnesses Obligado’s final moments, including a strange perspective from above the slab.  Seeing what joy Nemoiku brought to Obligado, she hands him back the memory chip and tells the Preservi to take good care of it, lest she change her mind about what their organization is up to.  As she leaves, she passes shelves storing thousand, perhaps millions of memory chips.

This was a dark but rather touching end to the Obligado prologue (there’d be more levity in the installments to follow).  Murphy’s tales tend to be bleak and cheerless, yet this story delivers a rather hopeful message.  As Obligado drifts away, Nemoiku tells him to embrace the oblivion that follows.  Obligado, however, feels that his consciousness will survive past his body’s expiration and claims that he can see his own cadaver.  The perspective on the final image of the memory chip even seems to confirm that vision.  Never mind that the perspective shouldn’t have been recorded since Nemoiku had ceased preserving the Professor’s memories by the time Xitor showed up; it’s the message that counts more than the internal logic.

I don’t think it’s necessarily a pro-religious message that this story ends on, though it can be interpreted both ways.  Obligado feels his consciousness continue after his death and his out-of-body POV is captured on the memory chip, suggesting he has a genuine soul or spirit which left his corporeal form.  On the other hand, the Utromi Preservi storing memory chips that chronicle the entire lifespan of an Utrom seem to be a literal manifestation of the concept that even if there is no afterlife, we are immortal through the memories of those we leave behind.  Our family or friends or whoever carry on our legacy, even if we physically no longer exist.

It’s a nice middle ground between spiritual and atheistic beliefs.  This prologue to the serial began rather bleakly, but Murphy ends it on a bittersweet note.  The sequence where Obligado requests his last memories to be of his infancy were touching and not overdone (we don’t see his vision, but instead hear him describe his parents and the base emotions of an infant).  When I’m an old man on my death bed, should I live that long, I predict the last thing I’ll choose to remember before drifting away are my parents and my childhood.

On the subject of the Utromi Preservi… I just don’t get them.  They appear to be “misunderstood” in the terms of this narrative.  Xitor treats them as a rogue faction that desecrates Utrom corpses, but has a change of heart when she witnesses how they comfort the dying and preserve their “soul” for the ages.  In this case, they don’t seem like bad guys at all (Xitor, a Police Sergeant, even vows to look the other way and let them continue their operation).

They’re a group of nihilistic terrorists out to destroy all of creation by resurrecting a primordial god.  That seems to run utterly counter to their motivations and designated goal from this story, where they’re determined to preserve the legacy of all departed Utroms through memory chips.  Hell, they’re called the “Preservi”, for cryin’ out loud.  So why the sudden shift to generic villainy?

Well, my guess is that when writing the second half of the Wild West C.O.W. Boys of Moo Mesa arc, Steve Murphy got his rogue factions of Utroms mixed up.  Although he identified the evil Utroms out to destroy the universe as the Utromi Preservi from this story, I suspect he was thinking of the Illuminated Utrom Alliance who appeared in Tales of the TMNT (Vol. 2) #23.  That rogue faction of Utroms was indeed a group of generic evildoers whose mission statement was to bring peace to the universe by annihilating all intelligent life.

But no, Tales #52 identifies the evil Utroms as the Preservi and even includes an editor’s note citing this storyline as their first appearance.  I guess at some point… the Illuminated Utrom Alliance might have taken over the Utromi Preservi and manipulated them into working their nihilistic angle?

It was a big screw-up, plain and simple.  No real way around it.

Anyhow, now that the gloom of the prologue is over, the Obligado serial will start to get fun as we see some of his amazing memories for ourselves.