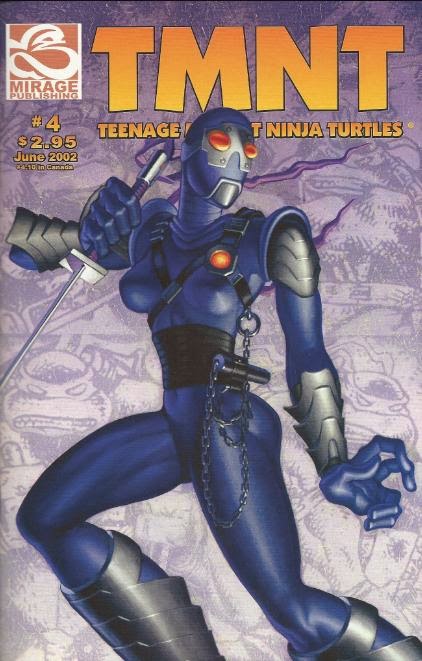 On the roof of an abandoned garage, Leo is building snowmen and waxing nostalgic for the days when Shadow was a little kid and they’d do this sort of thing together (before the “werewolf” incident forced her to move to Northampton).  He finishes his snowmen, including one that looks like the Shredder, and then uses them as dummies for sword practice.  He sees Don pulling an armored car into the garage and decides to see what’s up.  He takes a secret elevator down inside and is shocked when his brothers and Casey tell him about the alien invasion.  Apparently, Leo had been practicing for so long he missed out on everything. 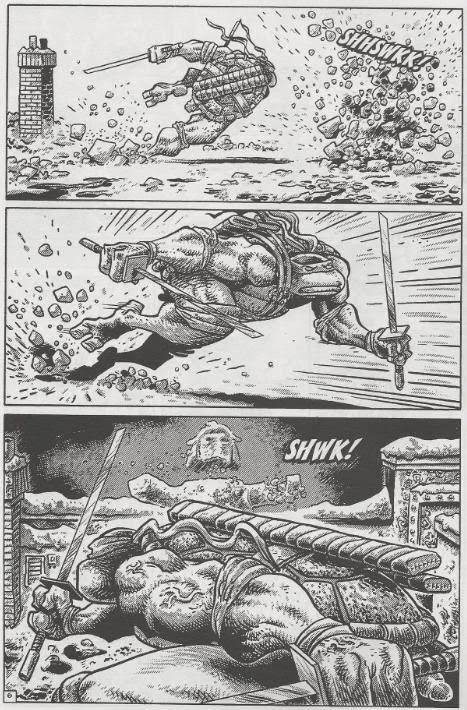 In Northampton, Stainless Steve Steel web-chats with Joey Lastic, who suggests the Justice Force stay out of the way in New York, as they’d just be a burden on the younger superheroes.  Steve then sits down with Shadow and Splinter and continues watching the news broadcast.  The reporter on TV is hovering in his chopper just outside a “no fly zone” around the artificial island which is being enforced by the military and the local superheroes (including Radical and the Metabeast).

Down in the lair, the Turtles, April and Casey have gathered to watch the report.  They’ve been trying to call Northampton all day, but the lines are overloaded.  Mike thinks he recognizes the Metabeast from the Kurtzburg Hospital, but isn’t sure. 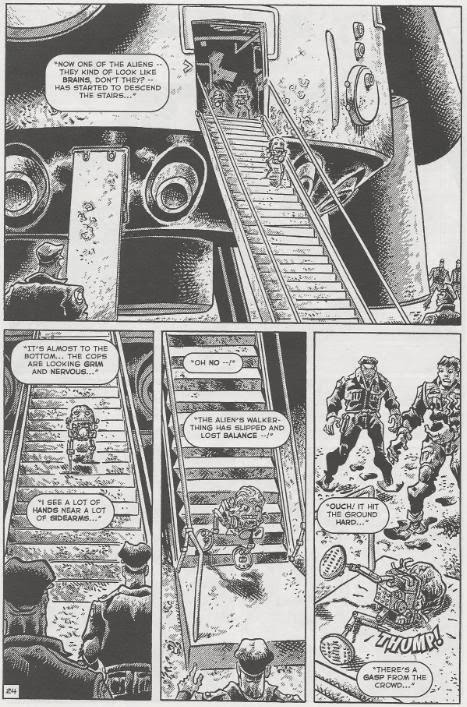 At the island, an alien “tug” comes hovering out of a hatch, carrying the shuttle Defiant beneath it.  The US space shuttle was thought lost weeks ago.  The tug takes the shuttle to the United Nations Plaza and sets it down.  As a crowd gathers, the tug’s doors open, a staircase extends and down step Commander Scott Harlan and the crew of the Defiant, none the worse for wear.  Commander Harlan tells the press he would like to introduce his new friends.  A trio of Utroms appear at the top of the stairs, operating crude walker devices.  The lead Utrom, a female, begins descending the staircase when she trips on the last step and falls flat on her face.  Commander Harlan helps her up while the crowd bellows with laughter, the tension of the moment having been softened.

Elsewhere, in what appears to be the sewers, a female Foot Ninja does battle with six Ninja Turtles.  Using the weapons at her disposal, she slays them all.  The training session ends and the holographic projections disintegrate, revealing a sterile training room and six Foot Soldiers.  A man in a suit, Yanada, then approaches the female ninja: Karai.  He tells her that he has recorded the news reports of the alien landing and she decides to catch up on the event in her quarters. 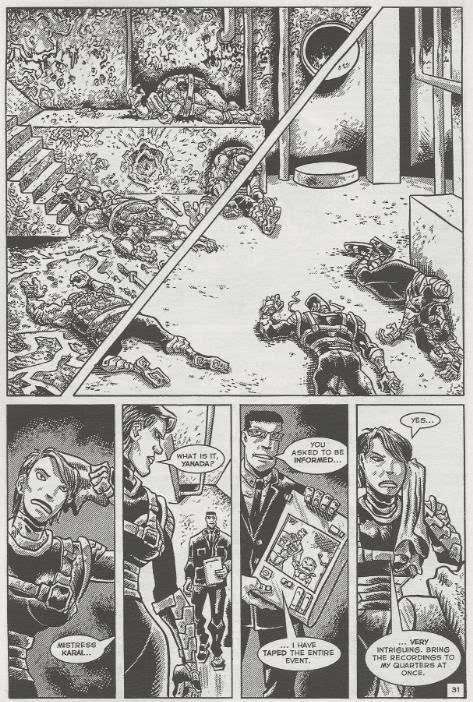 Down in the sewer tunnels, Mike has dragged Raph along with him to the UN Building.  Mike hopes to get a look at the Utroms in person and maybe get to talk to one of them (if they remember him).  Suddenly, the giant robot who had been helping the Utroms before they landed appears from the murky water.  Mike and Raph draw their weapons.

*Shadow was sent to live in Northampton after the werewolf attack which occurred in Tales of the TMNT (Vol. 2) #7.

*In her last appearance, Radical’s powers had been reduced, being permitted by the mystic council only to use them within the Dreamscape.  Apparently, things have changed since then, as she’s seen using her powers in the waking world.  Either that or Laird chose to ignore the events of the second TMNT/Savage Dragon crossover.  If that’s the case, then the Turtles last met Radical in TMNT (Vol. 1) #27.

*Chronologically, the Turtles last met the Utroms in Tales of the TMNT (Vol. 2) #23.

*The astronauts and their missing shuttle was briefly mentioned back in TMNT (Vol. 4) #1.

*If you’ve ever wondered why Shadow calls Mikey that stupid nickname “Rooish” sometimes, Laird explains in this issue's letters column that it’s an inside joke amongst his family (so of course YOU wouldn't get it).  Apparently, his daughter had a cat named “Mike” which they nicknamed “Mikeroo” and then “Roo” and then “Rooish”.  Now you can wonder no more.

Things in Volume 4 are really gearing up, but in a world-building sort of way.  The Turtles are as much observers to the Utrom landing as we the readers are.  They spend the issue as couch potatoes, sitting on the sidelines and watching the events unfold with awe and excitement.  And I think that’s just fine, personally.  Even though they have experience with the Utroms, they know that on this public of a scale there isn’t really anything they can do.  At best, they can watch from the sewers and hope to catch a peek, which is as proactive as the characters get in this issue.

The Utroms making first contact was a nicely done moment, though I wish we’d gotten more foreshadowing regarding the missing shuttle and its crew.  For instance, the first 8 pages of TMNT (Vol. 4) #1 are a long wordless sequence featuring the giant robot stomping along the surface of the moon.  Maybe that space would have been better spent covering the events of “a week ago” as the shuttle comes into contact with the Utrom tug and disappears.  The missing astronauts are only vaguely alluded to in a couple of sentences as mysterious "guests" of the Utroms and it's an easy detail to overlook (Laird even had to spell it out in the letters page of TMNT Vol. 4 #15).  Their subplot probably could have been setup better, yeah.

But it’s all good.  The female Utrom pulling a Gerald Ford was a nice touch of levity to such an overall serious story.

With Stainless Steve Steel and Joey Lastic making their appearances, I believe that accounts for all the members of the Justice Force save Captain Deadbolt (who is probably still frozen in place).  There’s a big emphasis on the superhero aspect of the Mirage universe in this issue, again following up on their use in the preceding issues.  Radical makes an itty bitty cameo and other, previously unheard of heroes get name-drops and face-time on the news report.  The “world populated by superheroes” concept was something Mirage never really did much with back in the day (honestly, the Image series did the most with that idea, though it “doesn’t count” in regards to Volume 4), so in a way Laird is in a hurry to play catch up with these early Volume 4 issues.  While we have to be reminded that superheroes are a normal part of everyday life, they counterbalance the Utrom landing rather nicely and help to explain why civilians aren’t completely losing their shit over this.  They deal with that sort of weirdness every day.

Karai makes her big return; she hasn’t been the focus of any TMNT stories since “City at War” and that was almost 10 years ago when this issue was published.  To be honest, she won’t amount to much in Volume 4, with a vaguely realized subplot that proceeds to go absolutely nowhere.  So don’t get too excited to see her again.  What surprised me about her reintroduction was the ambiguity of her training partners.  Are they robot drones or real live Foot Soldiers?  Because if it’s the latter then she totally kills them all (and merely for a workout, no less).  It’s a more ruthless side to Karai that was totally unseen in her part during “City at War” and I think it served to illustrate to the readers that Karai may not be the “good” bad guy we remember her as.

Laird also starts dropping the first of his “tales yet to be told” references and we’ll be encountering plenty of them as Volume 4 progresses.  The idea was that these references would be fleshed out in issues of Tales of the TMNT Volume 2 (which hadn’t yet started when this story came out).  Most of them actually do get issues of Tales, but several of them remain untold to this day.  Bummer.

Anyhow, it’s hard to break Volume 4 down into convenient “arcs”, because this isn’t that kind of book.  Yes, there are character arcs and story arcs that run through the volume, but they’re all paced separately from one another and there are few clean breaking points in the narrative.  For what it’s worth, though, I like to consider these first 5 issues to be the “First Contact” arc, since much of the primary focus revolves around the Utroms landing in New York.  It isn’t quite finished yet, but it is pretty exciting stuff and it kept me anxiously hanging on, back in the day.

Grade: B (as in, “But I feel pretty ancient, reading the editorial stuff in the back of the book.  The 4Kids cartoon was still ‘in development’ and Laird even mentions the Hallmark TV miniseries being close to happening.  Ohhhh, it doesn’t feel like it was over a decade ago…”)
Posted by TMNT Entity at 7:14 PM