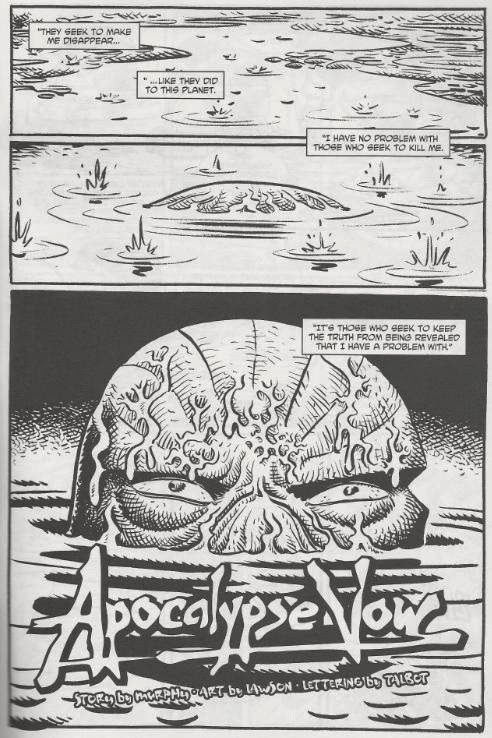 Magonia.  As Professor Obligado continues to study the gelatinous creature which may be the alpha ancestor of the Utrom race, a strange disturbance appears in the rain clouds above.  Suddenly, a ship enters through them and fires a laser down to the planet’s surface.  The blast destroys Obligado’s ship and flings him into the mud.

The attack ship lands and a quartet of Utroms on hovercrafts emerge.  Obligado recognizes them as members of the Utromi Obscura Secreti, a black ops organization that handles all of the Utrom government’s top secret dirty work.  Clearly, they don’t want him bringing back any knowledge regarding the true origins of the Utroms from Magonia. 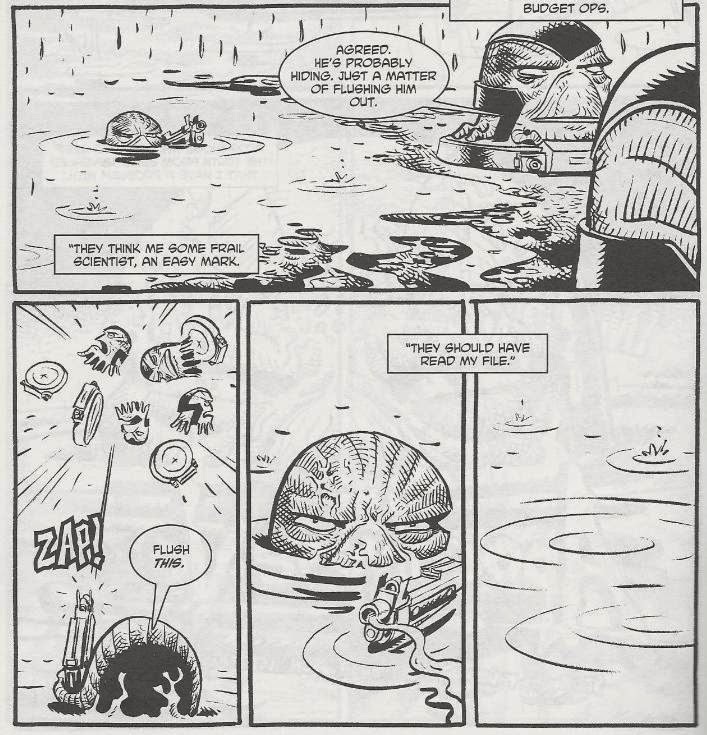 The Secreti soldiers underestimate Obligado and he takes them by surprise from the mud, blasting them from their hovercrafts.  He then sneaks aboard the ship through the landing gear access and makes his way to the bridge.  He finds one of his former students among the pilots, but shows no mercy and ejects all of the Utroms from the ship.  As he flies away, he promises to call them a rescue vessel, though he suggests that his student find a new occupation.

Blending into an asteroid belt to make his escape, Obligado looks into the data stored on the ship’s computer and finds some very interesting information.

*This story is continued from “First Mud”.  The story continues in “Altered Fates”.

This installment in the Professor Obligado serial was pretty much all action and fun, lacking the existential subtext from the previous chapters.  Not to say that’s a bad thing, since it IS fun and all, and if you’re reading through these chapters in one sitting it’s a refreshing break from all the heavy storytelling.

And unlike other rogue or villainous Utrom organizations such as the Utromi Perservi or the Illuminated Utrom Alliance, the Utromi Obscura Secreti are fully sanctioned by their government.  The Utroms are so often depicted as being this “higher authority” among all alien races in the Mirage universe, above wars and violence and often intervening as mediators in petty disputes (or saving doomed races from destroying themselves).  So in this tale we learn that their government isn’t nearly as benevolent as other stories have made them out to be, which suddenly casts their motivations in said other stories in a completely new light.