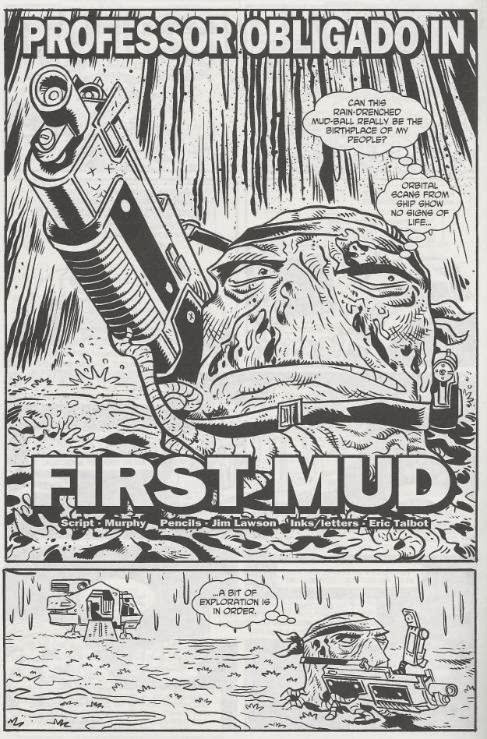 Still on his quest to understand the meaning of existence, Professor Obligado makes a shady transaction; spending one hundred thousand torracs for a cookie with some specific coordinates frosted onto it.

The coordinates are of the planet Magonia, which is an almost mythological world most refuse to believe even exists.  Legend has it that Magonia is the original point of origin for the Utrom race, before they left and founded the Utrom Homeworld at a time before recorded history.  Obligado follows the coordinates and finds the planet cloaked; deliberately hidden for centuries.

Curious as to what secrets the planet possesses which would have warranted it being hidden for countless eons, Obligado does a life scan but finds no traces of anything living.

Landing on the planet, he discovers that it is in a constant state of rain and the surface is nothing but mud.  The mud-itself forms into a pulsating blob with tentacles that attacks him.  Obligado’s laser rifle doesn’t faze it so he hurries back to his ship.  Still determined to communicate with the mud-creature in some way, he hastily whips up a batch of “C.H.O.N. cookies” (cookies made from a simple recipe of carbon, hydrogen, oxygen and nitrogen. 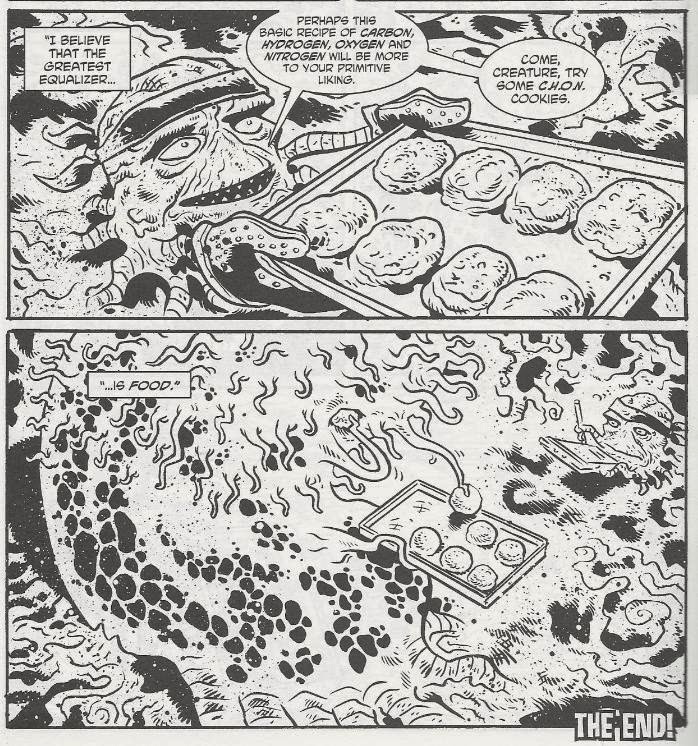 The simple lifeform begins scarfing down the cookies as Obligado studies it.  As he takes notes, he thinks to himself that beyond religion, politics, commerce or force… it is FOOD that is the ultimate cultural equalizer.

*This story is continued from “The Question”.  The story continues in “Apocalypse Vow”.

*More of the Utroms' hidden past will be explored in Tales of the TMNT (Vol. 2) #16.  That story may or may not also explain why the original Utrom Homeworld was hidden and just what that blob creature is.

Professor Obligado’s search for the ultimate meaning of life starts to get silly with this chapter.  Beginning here is the trend of having stories titled in homage to action films.  It’s goofy but a fun complement to the often heady and surreal subject matter of these stories.

There’s some light political intrigue in this installment, as we learn that for unknown reasons, the Utroms have seen fit to cover up their true birth planet.  It isn’t expanded upon here, but the idea that the Utrom government actively hides controversies of their past is followed up on in Tales of the TMNT (Vol. 2) #16.  The only explanation Obligado postulates in this story is that the idea of the Utrom homeworld not being the, uh, Utrom Homeworld clashes with their religious-political belief system.  In essence, the Utrom government would sooner hide the truth of their origins rather than overturn a “fact” ingrained into their culture for centuries.

You could read it as being light commentary on the real world controversy of Evolution vs. Creationism, but Murphy doesn’t lay it on that thick.  The subtext is there, certainly, but it’s executed exactly the way subtext SHOULD be executed… subtly.

The examples could go on.  It seems no matter how much some of us claim to hate another culture, we rarely extend that malice toward that culture’s food.  Because food is fucking awesome.