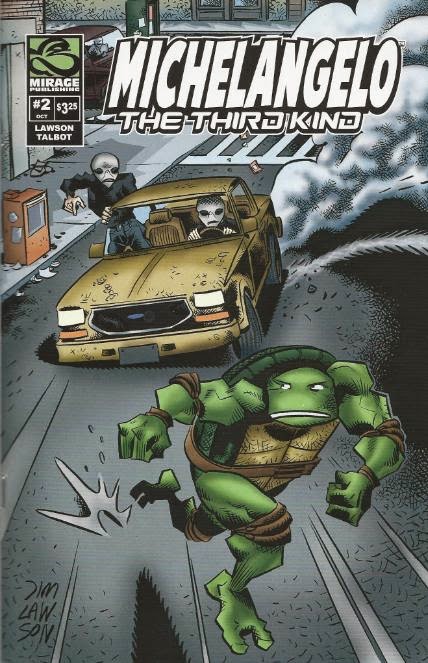 Making his way through the alleys, Mikey figures he’s in no shape to fight anybody else (having been hit by a bus a few days ago and now having been maced).  He sees a group of thugs wearing alien grey masks curb-stomping a kid in a Star Trek t-shirt.  With no choice, Mikey intervenes and beats up the thugs. 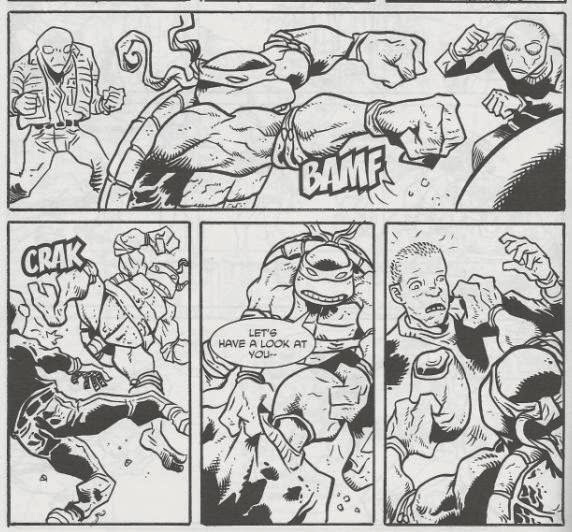 After they run off, Klag swoops down on a hovercraft, having followed Mikey to make sure he got home safely.  Klag gives Mikey a lift to a rooftop and tells him that they met once before.  Klag was a guard at the TCRI building when the Turtles returned from the Triceraton Homeworld.  When the Utroms began prepping Earth for First Contact several years in advance, Klag signed up to live amongst humanity in disguise.  He gives Mikey a communicator in case he ever needs to get in touch with the Utroms and the two part ways again.

At Barry’s mom’s apartment, Detective Clover meets up with Officer Murphy to investigate the body.  They go through the list of possible causes of death and settle on murder, with Barry being needed for questioning (although they have no motive).  Detective Clover sees the old lady’s cat with a dish named “Roswell” and starts to get edgy.  The city has been in an uproar since First Contact and all the paranoia has gotten her anxious.  She pulls out a picture of Mikey from the Pier 41 riot and says that the aliens claim to be cooperative, yet they allow one of their own to run around the city unregistered. 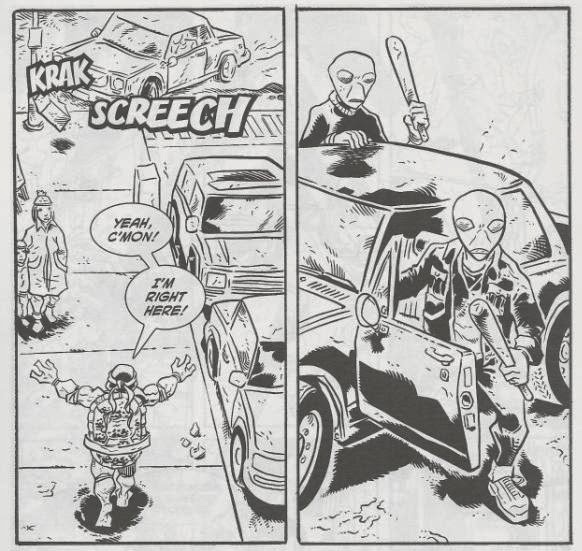 Mikey makes his way across the rooftops when he notices more of the masked thugs putting up flyers.  He jumps down the streets and reads one.  The flyer encourages citizens to report aliens for execution and is signed by H.A.A.R.M. (Humans Against Aliens Resistance Movement).  Infuriated, Mikey enters the middle of the street and yells for the thugs to come and get him (frightening several pedestrians).  A number of masked thugs descend upon Mikey and he realizes he’s in no shape for a confrontation, especially one that would make aliens look dangerous in front of a crowd.  Mikey flees into the sewers before the H.A.A.R.M. thugs can catch him.

Entering the lair, he’s greeted by his brothers as well as Ambassador Cesse Mon Zir Te from Pier 41 (flanked by several Utrom bodyguards).  The Ambassador tells Mikey he stopped by his home to thank him for defending him at the riot.  He has received numerous threats on his life from gangs like the Madhattan Maulitia and H.A.A.R.M. and is happy to see an Earthling trying to help him for a change.  Leonardo offers to protect the Ambassador fulltime, but the Ambassador declines.  He feels that if he is to gain the trust of the people, then he must be seen working with legitimate Earth authorities. 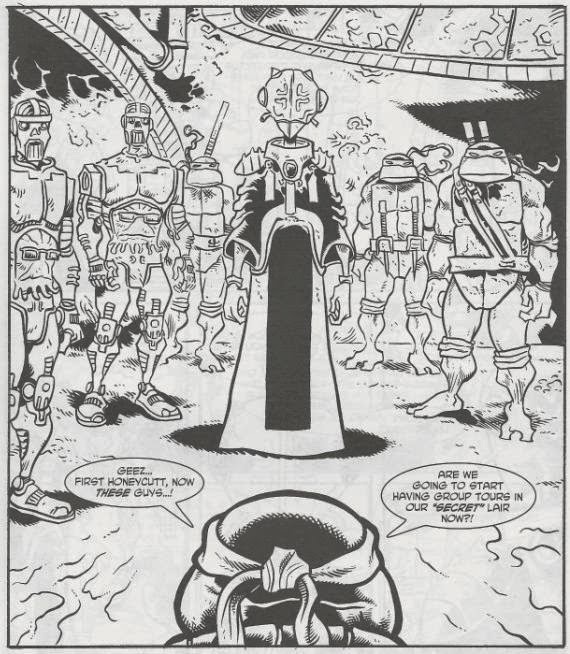 After he leaves, the Turtles have a discussion about just how the Ambassador and the Utroms found their “secret” lair.  Mikey swears he wasn’t followed, but Leo suspects the Fugitoid probably gave them directions.  Donatello and Raphael call attention to a news report on TV.  Apparently, in the wake of all the anti-alien violence, National Guard troops have entered the city and the Mayor has issued a curfew.  Leonardo tells his brothers that Mikey has caused enough bad publicity for aliens and that they need to stay in the lair until the situation settles.

In an alley up above, Detective Clover and her partner are investigating another murder.  This time, it’s a Guerrotopsian (an alien that “sees” through the eyes of other lifeforms around it).  They pull a .38 slug from the tentacled corpse and Detective Clover figures this is the first murder of an alien since First Contact occurred only two days ago.

*Klag mentions having met Mikey back when the Turtles returned from the Triceraton Homeworld to the TCRI building via the transmat in TMNT (Vol. 1) #7.  The editor’s note mistakenly identifies that event as having happened in TMNT (Vol. 1) #4, but there’s no saying Klag wasn’t present in that issue, too.

*The Turtles showed the Fugitoid down to their lair in TMNT (Vol. 4) #5.

“The Third Kind” is… slow.  Really, really slow.  It is an interesting look at how the world of the Mirage universe changed in-between pages of TMNT Volume 4, but it is not a very thrilling narrative.  I can only recommend “The Third Kind” to the most hardcore Ninja Turtle fans who are already well-versed in the lore of the comics, because this story doesn’t stand a chance of exciting newcomers.  As a hardcore TMNT fan well-versed in the comics, I personally enjoy the miniseries for what it offers to the ongoing development of this world, but I’ll be the first to tell you it’s pretty damn boring.

Michelangelo actually gets some attention in his own miniseries starting with this chapter.  Here we see him suffering the fallout of his stupid mistake at Pier 41.  I was really disappointed that the alien Ambassador visiting the lair didn’t tear into him for all the trouble he caused, but instead chose to thank him for coming to his aid (when really it was Klag who got the Ambassador to safety).

Michelangelo set off the powder keg at the event which was meant to be a show of good will and cooperation; proof that the alien visitors were obeying the orders and limitations given to them by the Earth government.  Michelangelo pretty well fucked that up for them, getting a lot of people hurt and “proving” to the people that aliens were breaking travel restrictions and hiding out amongst humans.  And at a media event, no less.  Michelangelo made a HUGE mistake and really shouldn’t be thanked for jack shit.

Barry’s subplot has now shifted over to Detective Clover, further showcasing how average people are dealing with this situation.  It’s slow, plodding stuff.  Lawson’s dialogue is the same as it ever was.  Way back when I reviewed TMNT Volume 2, I remarked that Lawson wrote dialogue by abusing humming noises for “realism”; characters are constantly going “Mmmm”, “Ummmm” and “Hmmmm”.  It is really obnoxious and 15 years later, he’s still doing it.

We’re halfway across “The Third Kind” and while I’m digging all the atmosphere it’s setting up, the characters remain dull as dishwater and the dialogue is even worse.  So it’s give and take.

Grade: C+ (as in, “Clover’s partner… does he have a glass eye or did Talbot just fuck up the inks on Lawson’s pencils?”) 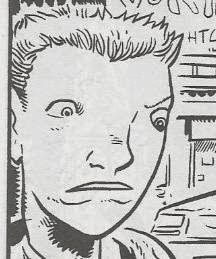