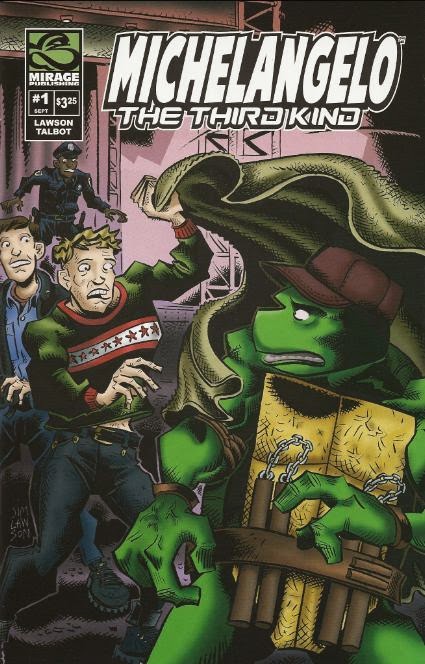 It’s been two days since the Utroms arrived on Earth, initiated First Contact and set up their Moon-Island base in New York Harbor.  On TV, the President of the United States addresses his people from an undisclosed location.  He assures them that the alien ambassadors (of several races) who have arrived on Earth have done so purely out of diplomacy.  They are also under strict orders to remain on the Moon-Island until the situation has been settled.  The President tells the American people not to panic, that he has spoken with “the visitors” and found that they simply want to share a cultural exchange and broaden humanity’s scope of existence in the universe.

The President informs the people that the rumors of the Utroms having a cure for cancer is unfounded.  However, the Utroms have promised to work with Earth’s scientists, combining their technology and research to hopefully speed up the discovery of a cure.  He asks the people to keep an open mind and not to judge the visitors by their appearance or to immediately suspect they have ulterior motives.  He also reassures everyone that the Earth will ever remain the planet of Earthlings and that the visitors are just that: Visitors. 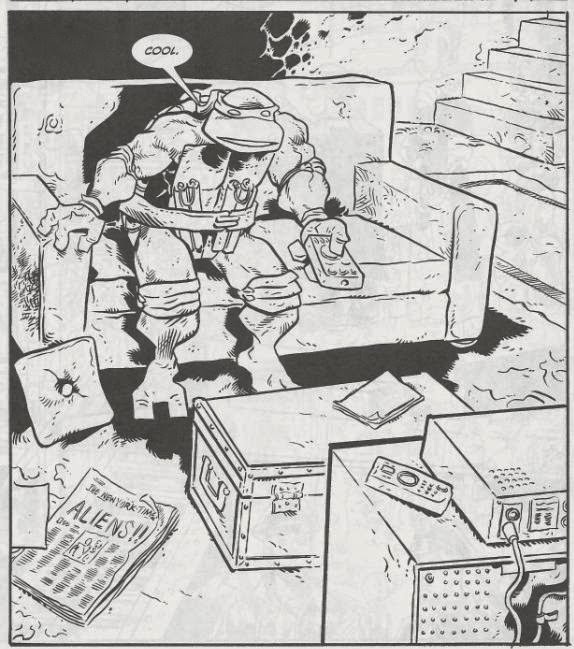 Watching the broadcast, a gang of "patriots" grows furious that the President is allowing the aliens to stay; they wanted him to nuke them.  One of the gang members, Barry, suggests they see what the aliens have to offer; maybe they CAN find a cure for cancer using their knowledge and technology.  Another gang member, Jingo, mocks Barry and says he only feels that way because his mother has stage four cancer.

Down in the sewer lair, Michelangelo is watching the media coverage.  The anchormen say that the President has authorized the alien diplomats to leave the Moon-Island for a press conference on Pier 41.  The NYPD requests that civilians not attend the conference due to the unknown nature of the aliens.  Michelangelo immediately drops his remote and rushes out the door. 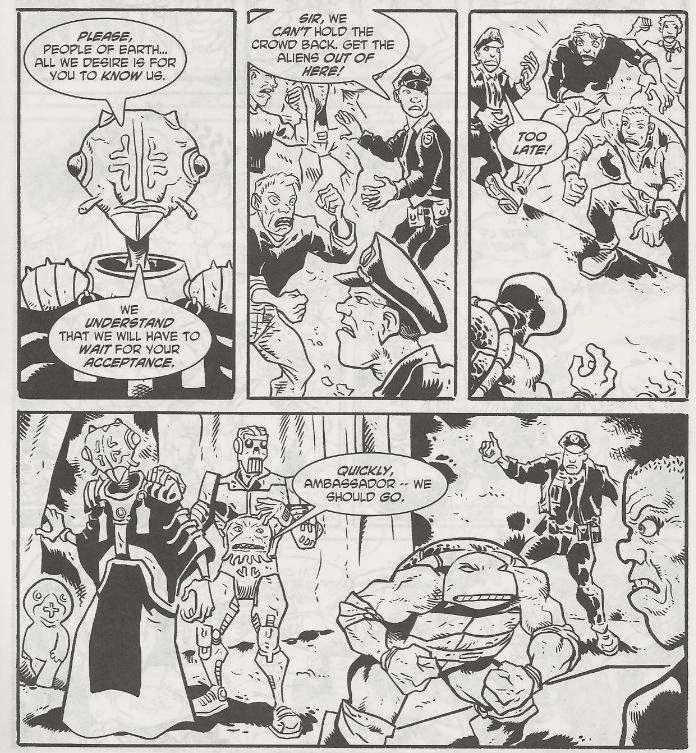 At Pier 41, the NYPD are struggling to keep a huge mob under control.  There are several alien ambassadors on the stage, waiting to address the people.  Michelangelo, disguised as a bum, is among the mob.  However, he bumps into a thug who gets mad and rips off his coat and scarf.  The mob mistakes him for an alien trying to hide among them and freaks out.  The NYPD immediately take control of the situation and escort Michelangelo onto the stage (even though he’s not among the registered aliens in their handbook).  The alien ambassadors are confused, as they don’t know Michelangelo, but the Utrom there says that he’s heard of him and that he poses no threat.  Ambassador Cesse Mon Zir Te asks Mikey to play along in order to avoid a riot and to explain everything when they’re done.  Mikey uncomfortably agrees.

A riot is inevitable, though, as the mob thinks that aliens are hiding among them and go berserk.  They begin to storm the stage and Mikey keeps the ambassadors safe by fighting off some thugs.  The NYPD indiscriminately fire cans of tear gas and Mikey goes blind.  The Utrom finishes helping the ambassadors to safety but turns back to help Mikey, who is about to get pummeled.  The Utrom uses the repulsor rays in his suit to disperse the crowd, then he and Mikey flee backstage.  The Utrom introduces himself as Klag and after shaking hands, the two part ways. 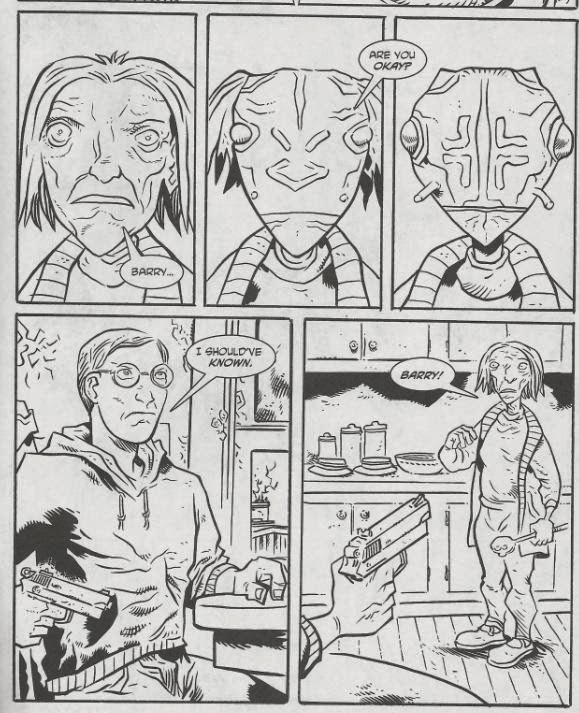 Elsewhere, Barry goes to pay his mom a visit.  As she makes him some lunch, she goes on and on about how much hope the potential for a cure has given her; she’s very excited about what the aliens have to offer.  Barry gets upset and tells her that the aliens can’t be trusted.  She thinks that Barry has been hanging out with his gang too much.  Barry gets angry and becomes delusional.  He sees his mother as Ambassador Cesse Mon Zir Te and thinks she’s been replaced.  Barry then pulls out a gun and shoots her.

*The story continues in Michelangelo: The Third Kind #2.

*This story takes place early in the six month time gap from TMNT (Vol. 4) #5, when the Utroms made First Contact on Earth.

TMNT Volume 4 handled the First Contact storyline pretty much ideally, so far as the flow of its narrative was concerned.  By skipping ahead six months, it bypassed the doddering diplomacy necessary to integrate aliens into Earth society and fast forwarded the reader right to the good stuff.  Having to actually endure all this extraterrestrial acclimation stuff would have stopped Volume 4 dead.

BUT, it was a story that needed to be told at some point and a period of time with lots of room for exploration.  Until "The Third Kind", the only issues in Tales of the TMNT Volume 2 that actually explored these six months of mystery were some adventure stories, usually involving Donatello travelling with the Utrom Glurin to alien planets or wherever.  They were fun adventure stories, don’t get me wrong, but there was a whole societal upheaval going on that those one-shot tales paid no mind to.

With “The Third Kind”, we get to see that time period explored more in-depth; how the arrival and integration of aliens affected human culture and the slow grind necessary to achieve acceptance.  Jim Lawson, as an author, is one of the TMNT’s more cerebral writers and he enjoys penning existential tales about the Turtles finding their place in the universe.  He’s also a big fan of decompression, for both good and ill, so he was the obvious choice to tell this missing chapter in the TMNT’s timeline.

For a miniseries named after Michelangelo, his narrative rubs off as almost the least important in this first issue.  Barry gets considerably more focus than Mikey and the story seems more about him than anybody else.  It’s important stuff, though, since “The Third Kind” has to do a lot of world-building and we need to see how “normal people” are acclimating to First Contact.  Barry, so far as a gangbanger is concerned, starts the issue as a seemingly decent guy who hangs around with a bad crowd.  However, as the issue progresses, the stress and fear starts to get to him and he snaps.

Likewise, we have the mob at Pier 41.  When we first see them, they’re a healthy mix of jerks holding “get out” signs and pleasant people holding “beam me up” and “welcome” signs.  Not EVERYONE in that crowd was xenophobic.  However, once Mikey fucks everything up and fear starts to spread, even those good people descend into fight-or-flight madness and a riot breaks out.

With Barry and the mob, Lawson seems to be trying to illustrate how even “good” or “normal” people can become just as dangerous and unpredictable as the Madhattan Maulitia or other thugs, simply by virtue of the situation.  It sells the atmosphere of unrest and paranoia that establishes the setting of this miniseries, and even though Michelangelo has to take a backseat in the first issue of his own title, such groundwork was essential.

So far as Mikey’s part in all this goes, he really fucks up big time.  It does offer an interesting character study on him, though.  Mike’s in his thirties by this point in the timeline, so he really ought to know the dangers of trying to mingle with an anxious crowd, especially considering what they’re anxious about (weird-looking aliens).  However, he lets his enthusiasm to see the aliens up close get the better of him and he makes a huge mistake; an “intergalactic incident”, as it were.  So we can see that even though Michelangelo is very much an adult, he still let’s his naive enthusiasm get in the way of his better judgment.

“The Third Kind” was probably my favorite of the Turtle-themed miniseries that Mirage put out in the ‘00s even if I don't feel all that passionately about it.  It isn’t really all that exciting, but it tells a story that needed to be told and helps build the world.  I was glad Laird skipped these six months in Volume 4 for the sake of pacing, but it’s a good thing we’re being filled in after the fact.