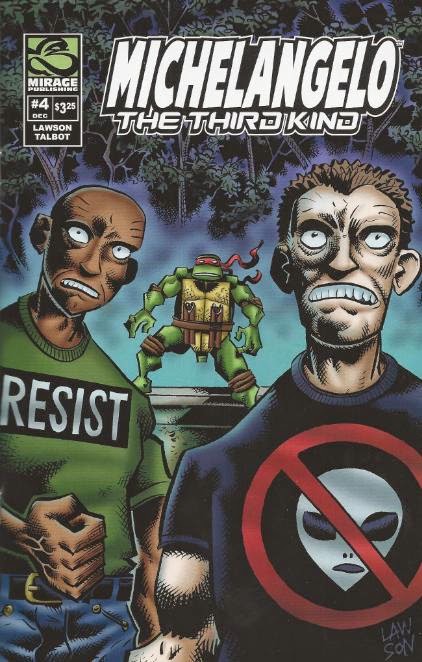 Strolling down the street, Michelangelo meets up with Klag (who is wearing a “skin suit” to disguise himself as a human).  Klag tells Mike that he called him with urgent news: H.A.A.R.M. has placed bombs all over the city and is threatening to detonate them unless Ambassador Cesse Mon Zir Te is handed over to them for execution.  Mike asks why the Utroms don’t just do a weapons scan on the city like before, but Klag says the atmospheric rings would tip off H.A.A.R.M. and they’d detonate the explosives.  Klag asks Mikey to come with him to the park where they’ll be making the exchange and try to help him resolve the conflict bloodlessly.  Mikey hops on the hovercraft and they vamoose. 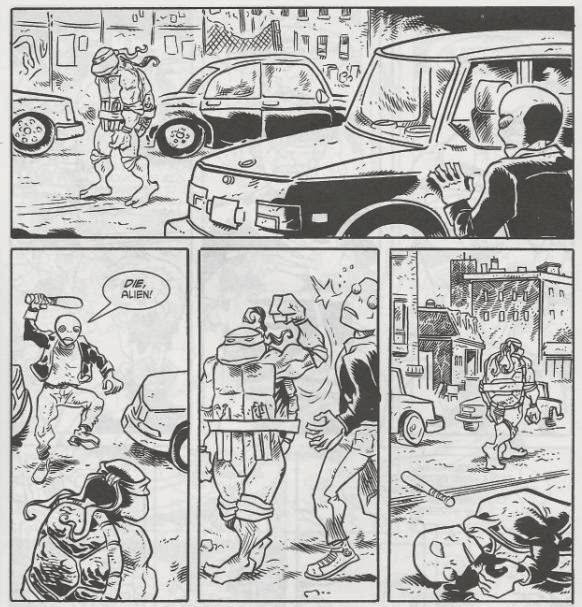 At a park near the docks, Klag parks his hovercraft and tells Mikey that he has to coordinate the NYPD standing guard, but asks Mikey to keep watch in case things go sour.  Mikey finds the H.A.A.R.M. mob in a clearing as the Utroms deliver the Ambassador to them.  Jingo then comes strolling to the center of the clearing to the tune of a standing ovation from his loyal followers.  Jingo asks them to settle down, as he has a speech to deliver.

Jingo says that he’s taken the time to reflect on his behavior and has come to the conclusion that he was motivated out of fear and distrust.  However, he says he realized that in order to move forward as a person, he needed to overcome that fear.  He tells the crowd that they, too, need to overcome their fear and accept the change with an open mind. 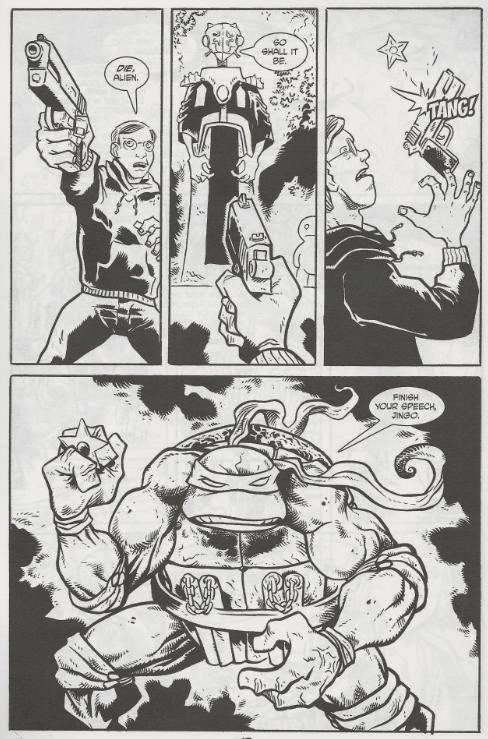 Barry erupts from the crowd, saying that the aliens have brainwashed Jingo and pulls a gun on the Ambassador.  Before he can fire, Mikey knocks it from his hand with a shuriken and asks Jingo to finish his speech.  Jingo simply says that they must overcome their basic urges to fight and lash out with violence so that they can learn and grow as a people.  The Ambassador shakes his hand, settling the feud.  Detective Clover and the NYPD then take Barry into custody.  Clover sees Mikey disappear into the woods but, after having witnessed him save the Ambassador’s life, chooses not to pursue him.  Mikey waits for Klag by the hovercraft but when he doesn’t show, he decides to fly it back to the Moon-Island.

Landing the craft, Mikey hears a thumping from the trunk.  Opening it, he finds the real Jingo bound and gagged.  Klag then approaches him and explains that he was the "Jingo" who gave the speech, having worn a skin suit in Jingo’s likeness.  Klag apologizes for the deception, but says he felt that it was the only way to quell the violence and inspire the people to reconsider their opinions.  Mike asks what will become of Jingo and Klag says he will have his memory of the incident wiped before being returned home unharmed.  Mike suggests that Jingo will simply go back to being a bigoted hatemonger, but Klag assures Mikey that humanity possesses the ability to change more than any of them realize.

Traveling in a hover-van from the Moon-Island, a pair of Utroms drop off a small, tentacled alien (the same one who was almost lynched) and wish him well on his daytrip to New York City.  As the alien silently traverses the city, he bears witness to a number of reactions.  Protestors yell at him, cabbies tell him to get out of the way, oblivious businessmen mistake him for an ashtray, dogs pee on him, girls flash him, tourists crowd him for photos and street musicians tell him to get off their turf. 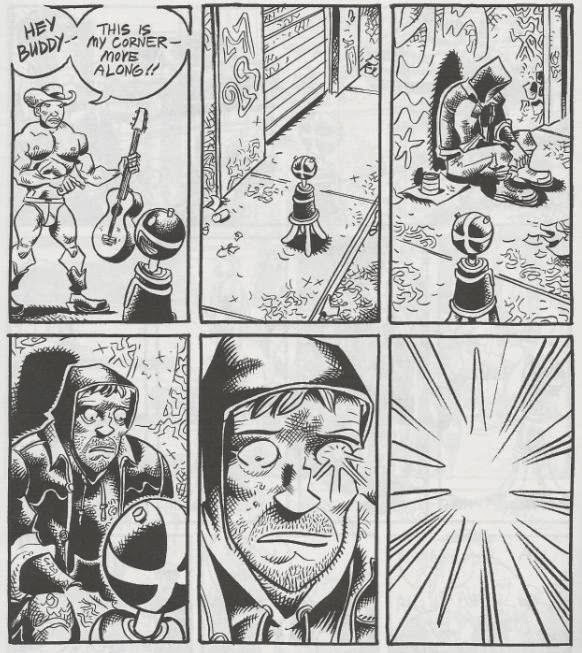 At last, the alien crosses paths with a homeless man.  The bum looks into the creature’s face and his eyes glow with enlightenment as he witnesses the broader scope of the whole universe.

*This story is continued from Michelangelo: The Third Kind #3.

And so “The Third Kind” just sort of… ends.  All of the characters, story arcs and concepts were set up in advance in this miniseries and nothing feels out of the blue or anything.  It just sort of starts and stops and starts and stops and then ends.  The pacing of the narrative is bumpy with odd time gaps between chapters, and characters just sort of appear and disappear with varying degrees of importance.  I mean, just look at Barry.  He got the lion’s share of attention in the first issue then disappeared altogether for the middle of the series and then appears suddenly here at the end and has his storyline resolved.  Detective Clover was looking like she might have a big impact on the storyline but her conflict with Mikey is resolved with a silent nod.

It’s a clumsy read, as characters drift in and out of the story with lopsided amounts of attention and even Michelangelo is just sort of there.  He takes orders from Klag and helps save the day, but his dialogue is dry and lifeless, pretty much just going through the motions.  Jim Lawson wanted to tell a story about prejudice on a global scale and Michelangelo is merely along for the ride.  That’s fine, since First Contact is much bigger than the Ninja Turtles and they very much ARE “just along for the ride” in this scenario… but man does it make for a dull read.

And yet, there are moments that I really love.  This issue starts with Michelangelo just cold walking down the street in broad daylight and totally not giving a fuck.  It’s something he’s never been able to do before in his life and he is taking absolutely NO joy in the experience.  H.A.A.R.M. thugs try to attack him, pedestrians either scream or chatter behind his back… He finally gets to socialize and be amongst the people as himself and it blows.  Lawson doesn’t spell it out with an internalized monologue or anything and the scene doesn’t go on for too long; you just observe it and you can tell exactly how Michelangelo feels.  This is everything he thought he wanted his whole life and it’s nothing like he imagined it would be.

The twist ending with Klag masquerading as Jingo came not so much as a surprise but felt like more or less the only means to resolve the conflict.  It was deceptive, but presented as a case of the ends justifying the means.  Taking a messiah-like entity and having him sing a different tune in order to sway the masses was pretty fitting strategy from the Utroms; a non-violent solution though one that poses an ethical dilemma.

At the same time, however, “The Third Kind” is very much a Big Picture kind of story.  New York City is just one city in the whole world; there are 6 billion people reacting to First Contact and the Utroms are likely going to have to deal with the same issues all over the globe.  And with a one year deadline, they can’t really take the time to gradually coax the masses into coming around at their own pace.  Subverting the populace by masquerading as influential figures has a "They Live" feel to it, yeah, but it gets the job done without killing anybody.

“The Third Kind” is also a lot of preaching.  Lawson goes on and on about how awful humanity is with the attitude of someone whining, "God, aren't people just the WORST?"  But unless I’ve been mistaken all these years, I figure Lawson is a human being, too.  It’s this holier than thou shtick that you get from a lot of folks who generalize humanity as being inherently evil or selfish or cruel or bigoted… all of humanity except the people preaching against humanity because they know better, right?  “Everybody is awful but me”, that sort of attitude.  At the end of the day, Lawson is trying to lead his readers to a very simple conclusion (“Racism Bad.  Change Good”) but takes a ponderously long-winded route to get there with a lengthy diversion through Narcissism Country.

As for the back-up, it summarizes the message Lawson spent four issues running into the ground with only four near-wordless pages.  "Everyone on Earth is terrible except one guy and that one guy is totally enlightened and understands the universe better than everyone else."  Or maybe it was something about an open mind or whatever and I'm just being cynical, I dunno.

Anyway, “The Third Kind” is a bore but it shows us the sweeping change in the Mirage universe that before now had merely been summarized in a narrative caption.  Because of the broad scope the actual Turtles feel like small fish in a big pond, which isn’t out of line, but it makes for a dull, plodding yarn.  So this was a boring comic that told an important story.  Do the ends justify the means?  Presumably Klag would think so.

Grade: C- (as in, “Can’t say that I’m not personally guilty of standing on a soapbox and preaching my opinions to people.  This is a blog, after all”.)
Posted by TMNT Entity at 8:11 PM