The Doors of Deception 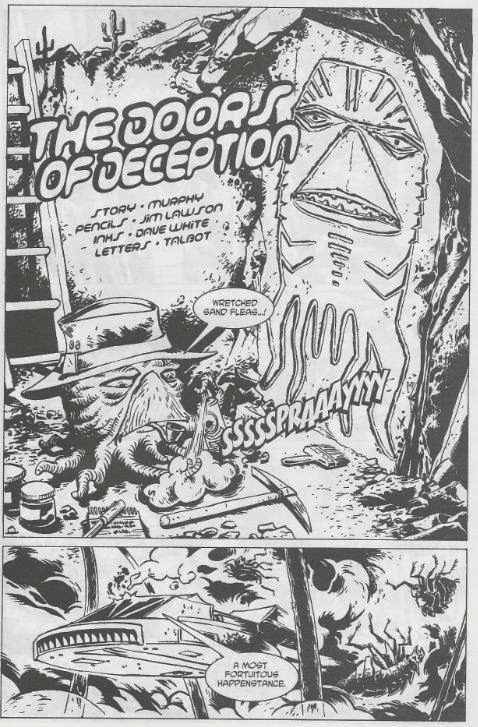 “The Doors of Deception”

After travelling through the Deus Optica wormhole, Professor Obligado finds himself in a dense forest of massive follicles and is attacked by gargantuan fleas.  He tries to evade the fleas, but they latch onto his ship and begin gnawing at the cockpit window.  Suddenly, a cloud of gas descends upon the scene, instantly killing all the fleas.  Obligado thinks this was a wonderful stroke of luck.

Unbeknownst to him, he’s actually in a shrunken state, navigating the tiny hairs on the tentacle of another Utrom.  That Utrom is an archaeologist who has just unearthed a massive stone tablet of an Utrom in the middle of a desert.  The Utrom archaeologist has also gotten a case of “sand fleas” and is using some aerosol bug-killer to eradicate them.

Obligado is about to punch in some hypderdrive coordinates to escape the strange place when he notices the massive stone tablet.  While he stops to inspect the tablet, the Utrom archaeologist spots the itty bitty ship.  The archaeologist catches Obligado’s ship in a glass specimen jar and takes a closer look. 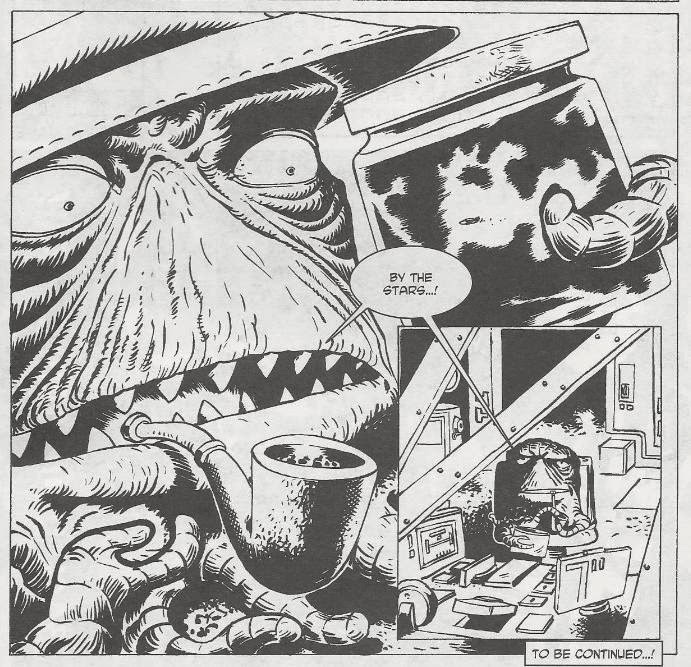 *This story is continued from “Altered Fates”.

*Despite the “To be continued” notation at the bottom of the last page, this is the final chapter in the storyline.  The Professor Obligado serial was never completed.  In the letters pages of Tales of the TMNT (Vol. 2) #34, Murphy says: "I promise to get around to the final installment sometime in the next couple of months."  He never did.

So there you go.  That’s where it ends.

If the Professor Obligado serial could ever truly “end” is a matter of debate.  This portion of the narrative was a chronicle of his endless search for the origin of existence and to contemplate and quantify nothingness.  You don’t exactly get an “ending” to a quest like that.  And anyway, the Obligado serial actually began with the “ending”, showing us the Professor’s ultimate demise before segueing into a new storyline chronicling his life.

So with that in mind, we know how Obligado’s story ends; that isn’t a mystery.  What the unfinished serial leaves dangling, however, is the plotline regarding the Utromi Obscura Secreti and the various truths they’ve been hiding from the public.  Why didn’t the Utrom government want their people to know about Magonia and the Deus Optica?  Obligado in an earlier chapter postulates it may have been because it would disrupt the religious and historical status quo, but we’re never given a concrete motive.

And I guess we’ll never know.  While it sucks that it ends on a cliffhanger, the Obligado serial certainly leaves you wanting more, which means it was something worthwhile to begin with.  Murphy hit on a lot of heavy subjects with this storyline and it’s a shame he burned himself out, “losing interest” and never finding the motivation to carry on.  Though if you give Tales of the TMNT Volume 2 a once over, you’ll see that the Obligado storyline was just one in a number of aborted storylines that were left unresolved as the title continuously failed to follow through on most of its storytelling promises.

The Professor Obligado serial, despite remaining incomplete, was something fresh and fun.  The backups were a welcomed little bonus to look forward to in the early years of Tales Volume 2 and one of the aspects I remember best about that era of the title.  Obligado wound up being one of the most fully formed and fascinating characters to come out of the series and he never once interacted with the Ninja Turtles.  He was his own character having his own adventures in the Mirage universe and they were all surreal and engaging.  If the only grievance I have with the series is that “there wasn’t more of it” then that’s hardly a knock against it at all.

Grade (for the whole serial): A (as in, “And wouldn’t it be nice if he could be revived by IDW or Nick or somebody?  I miss the old guy…”)
Posted by TMNT Entity at 5:50 PM