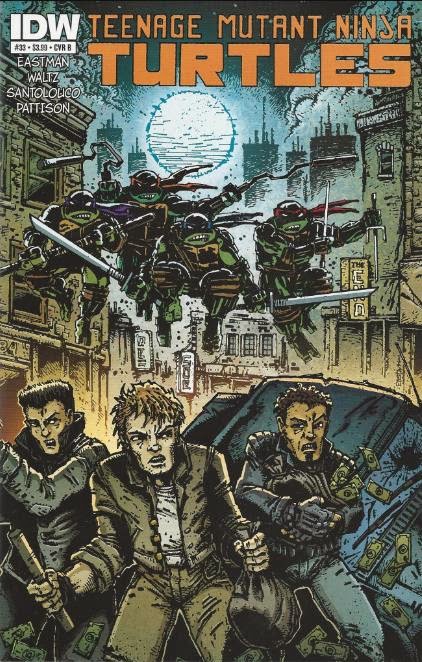 After dark in New York City, a trio of bank robbers attempt to abscond with the loot when they’re felled by the Turtles.  Mikey is thrilled to fight crime, but Leo reminds him that they’re just on a training exercise and that they AREN’T superheroes. 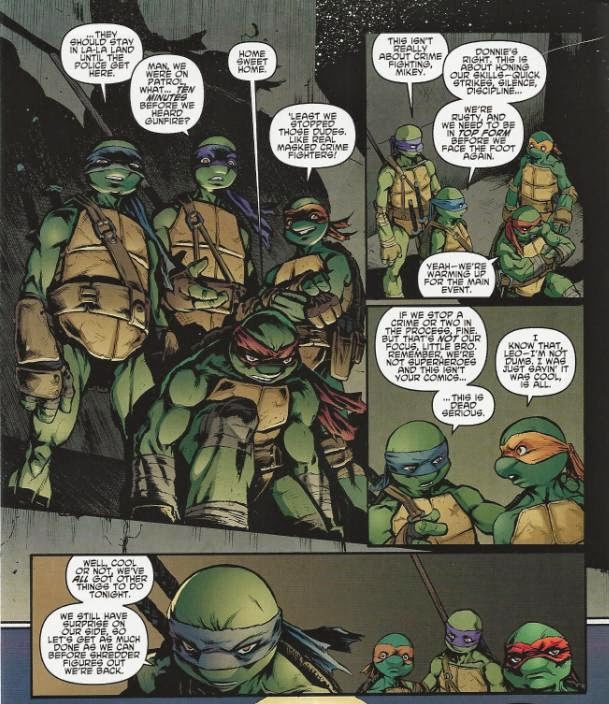 At Foot HQ, Hun reports to Shredder that under his orders, Bebop, Rocksteady and the Purple Dragons successfully knocked over an armored car and scored $500 grand.  Shredder congratulates Hun and informs him that he’ll be leaving for a “business trip” and in his absence, Karai will be in full command.  Shredder dismisses everyone but Hun, as he wishes to talk to the Purple Dragon about his son.

At the church lair, April is packing up Harold Lilja’s anti-gravity gauntlets whilst trying to convince Casey to go back to school.  Casey dodges the conversation and says he has to leave and check in with Angel at the Skara Brae.  The Turtles come home and Don asks April what’s the matter.  April explains that due to his injury, Casey lost his hockey scholarship.  She’s been trying to convince him to get financial aid and finish school anyway, but he hasn’t wanted to talk about it.  Don suggests that Casey’s probably still trying to work through his stuff with Hun.  And anyway, Don says he can relate to April, as he also feels like he’s been trying to tell everyone something important only to be ignored.  He has the schematics for the Fugitoid’s teleporter, but no one seems in a hurry to coordinate the resources to build it.

At the Skara Brae, Hun pays Brooklyn a visit.  Kid Kennedy and Ferguson try to strike up a conversation with Hun, but he shoos them away.  Hun demands to know where Angel and Casey are, but Brooklyn remains obstinate; not knowing where Casey is and making up a cover story to hide the fact that Angel is in his back room.  Brooklyn, a former Purple Dragon, insults Hun for sinking so low as to take orders from the man who nearly killed his own son.  Hun recalls his conversation with the Shredder…

Shredder reveals to him that he stabbed Casey.  It was part of a plot to use the boy and he had intended to merely use Hun, as well.  However, after Hun proved highly capable as a gang leader, Shredder chose to keep him around.  Shredder tells him that there is a place amongst the Foot for Casey, but Hun must be the one to invite him into the fold.  If Casey refuses, he will be treated as a threat to the Foot and hunted down accordingly…

In a rage, Hun attacks Brooklyn, prompting Kid, Ferguson and Angel to come to his rescue.  Hun tosses the two drunks aside and has a chat with Angel.  Angel also refuses to say where Casey is, but before Hun can beat the truth out of her, Casey steps into the bar. 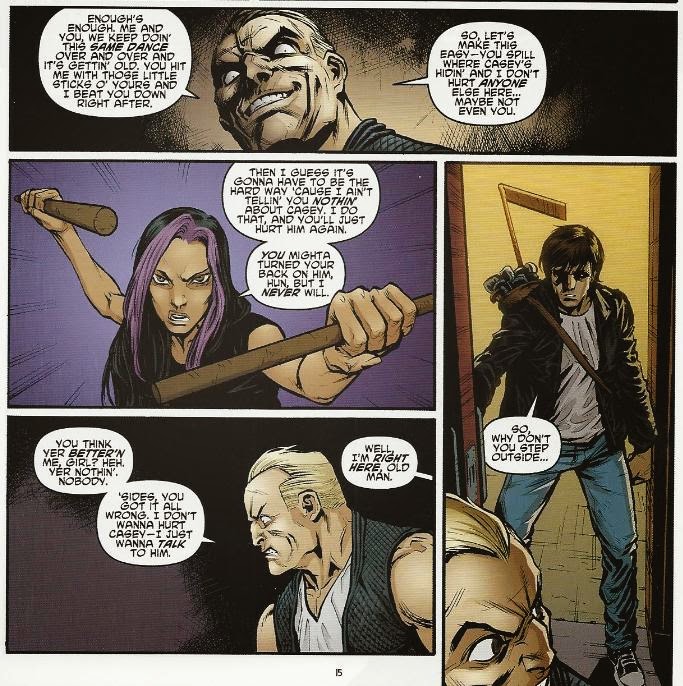 Down in the lair, Leo goes to convene with Splinter.  He tells his sensei that Raph and Mikey have left on their mission while Don and April have gone to see Harold Lilja.  Splinter asks how his son is feeling and Leo expresses that he’s just happy to be back.  Splinter is pleased, as they don’t have much time before the Shredder realizes they’ve returned to New York and they must all be in prime condition.

Outside the Skara Brae, Hun explains the situation to Casey and implores him to abandon his mutant buddies and join the Foot.  Casey, of course, refuses.  Rather than get violent, Hun realizes that he can’t force his son to join.  Instead, he offers to give Casey a cut of the cash he’s stolen so his son can leave the city and start over somewhere far away.  Casey asks Hun that if he DID take the money and run, would he come with him?  Hun says no.  Casey tells his father that he isn’t going anywhere and the two part ways.

Inside the Skara Brae, Casey tries to smooth things over with Brooklyn, but the bar owner is furious.  He thinks that Angel and Casey have gotten in over their heads and now their actions have nearly destroyed his livelihood and his family.  Angel storms out of the bar and Casey follows her. 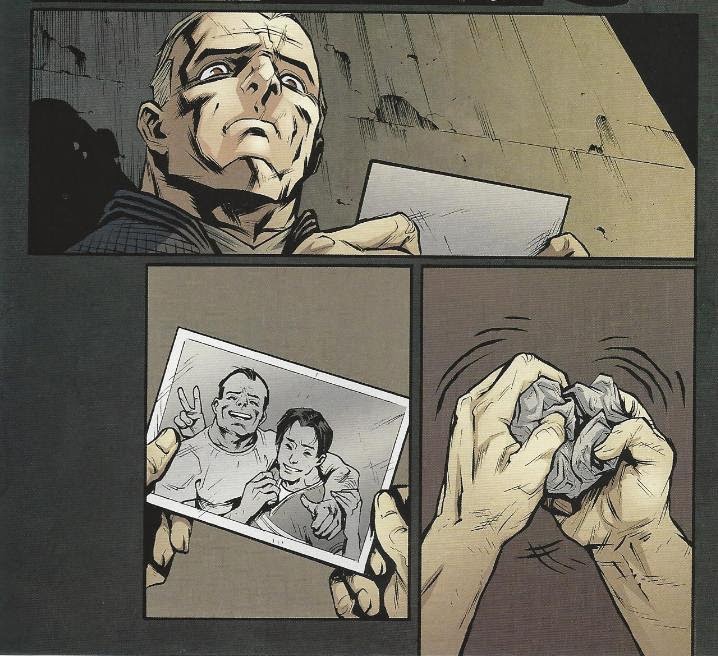 In an alley, Hun looks at an old photo of himself and Casey.  He makes his choice and crumples up the photo, throwing it away.

*Donatello received the message from the Fugitoid with the teleporter schematics in TMNT: Utrom Empire #3.

*Harold Lilja last appeared in TMNT (IDW) #26, which is when he leant April his anti-gravity gauntlets.

“Northampton” is over and we’re back to our regularly scheduled program.  This issue starts out fast, getting back into the swing of things as the Turtles return to all the ongoing story arcs they left simmering four months ago.  And all the better for this approach, too, since “Northampton” was essentially the breather arc after “City Fall” and I think we’ve all had enough chilling and twiddling our thumbs, right?

Before we get to the meat of this story (Casey and Hun), let’s talk about some of the other moments.  I recall way back near the start of the series, there was an issue where the Turtles mentioned “going on patrol”.  That seemingly innocuous statement elicited some consternation from the fanbase, as the TMNT aren’t vigilante superheroes who go on nightly patrols, looking for crime to fight.  Leo’s and Mike’s conversation on that very subject at the start of this issue seemed like Waltz’s belated response to those concerns.  It sets the record straight, though the talk drags a bit and threatens to pierce the Fourth Wall.  I’ll just say that “Turtles on Patrol” isn’t one of my personal hot buttons, so I never got all up in arms about the situation either way.

There’s a weird imbalance in this issue regarding subtlety vs. “are you for real?”  In regards to the former, during April’s entire conversation with Casey and then Don, she’s seen packing up the anti-gravity gauntlets she borrowed from Harold.  They’re never addressed in the dialogue but they’re ever present in the image, particularly when April and Don segue into a discussion about getting help to build the Fugitoid’s teleporter.  At the end of the issue, Leo offhandedly mentions to Splinter that April and Don have gone to visit their “computer friend” and you can put two and two together on your own (they left to return the borrowed gauntlets and pitch the teleporter project).  It was all there, but required a smidgen of reading comprehension to pick up on and I appreciate the confidence in my cognitive faculties from the IDW staff.

But then there’s all the expository dialogue where everyone inexplicably soliloquizes their life story to each other or suddenly feels compelled to tell their closest friends and confidants what their own names are (the bank robbers at the beginning).  Kid Kennedy and Ferguson, two of the more irritating hangers on from the 2012 TMNT Annual, are probably the worst in that regard.  While I know it’s nothing new in the world of comic book storytelling for characters to remind other characters about their names and histories for reader benefit, some of this stuff is pretty clumsy.  And man, Kid and Ferg’s dialogue is one marshmallow clover away from being a Lucky Charms commercial ("Me boyo"...?  Seriously?).

The real core of this issue is the interaction between Hun and Casey.  Their deal is complicated in a way that they can’t really maintain any sort of status quo as opposing forces without stretching the credibility of the narrative.  So I’m really glad it was the first thing Waltz chose to address after getting things going again.  While I don’t think the turmoil is necessarily stabilized between the two (far from it, I’m sure), their animosity has reached an understanding so both sides can continue down their paths without the reader having to constantly stop and ask “But what about this?  But what about that?”

What I liked best about their father-son chat was the direction Waltz chose to take it in, or rather, the direction he chose NOT to take it in.  After seeing Stephen Mooney’s variant cover, I was fully expecting there to be some violent showdown between the two.  When Hun grabbed Casey’s arm at the end of page 17, all I could think was “Yep, here it comes”.  And then… a complete U-turn and a nonviolent resolution.  It’s not just because this was the unexpected way to go, but because on a storytelling level it was the RIGHT way to go.  Hun has been priding himself on his “reformation” and along with abstaining from alcohol, he’s also sworn off beating his son.  He continues that attitude of being a “better person” by talking things out with Casey regardless of how heated their discussion becomes, which serves to make him that much more interesting and relatable a character.

The dialogue, again, spells it out a bit too much for the reader, but there’s a lot in here about choices; selfishness vs. selflessness and how to truly differentiate between the two.  Hun, shortly after learning that Shredder had planned to discard him but only elected to keep him around because of his dependability, offers to put his reputation at stake to keep his son safe.  He says he’s willing to give Casey money, make up a cover story for him and help him get out of the city so he can start over.  On the surface, that does seem like a very selfless and caring thing to do.  But then Casey asks if he’ll come with him and Hun has to make another choice… and he chooses to stay behind with the Foot because, from his perspective, it’s the Foot that have revitalized him and made him a better person.  So when push comes to shove, he’s STILL choosing himself over his son; an ultimately selfish decision.

I’m wondering where all these bombshells are going to send Casey.  In addition to coming to an “understanding” with his father and drawing the battle lines in the sand, he’s also lost his scholarship due to his injuries (and he’d been struggling to keep that scholarship since the first year of this book).  He’s lost his dad and he’s lost his scholarship and heck, even Brooklyn kicked him out of the Skara Brae and he’s now essentially lost his old “neighborhood”, too.  Casey’s been a bit too mellow in this comic and he’s spent a LOT of time on the sidelines for the past year or more (excluded from “Krang War”, stuck in the hospital for almost all of “City Fall”, chilling in the farmhouse during the big fight in “Northampton”).

It really is long past time IDW gave Casey something to fucking DO; to be the badass street fighter he’s supposed to be.  And maybe all this drama will give him back his attitude, which has been sorely missing for I don’t know how long.

TMNT #33 was a pretty solid issue.  Since the meat of the story is a lengthy, emotionally charged conversation about parental neglect, the comic has to take its action sequences where it can find them (a dumb bank robbery at the beginning, Kid and Ferg starting a dumb fight in the bar).  The action sequences, meaningless as they are, do break up the monotony of all the talking talking talking, so I guess they aren’t all that meaningless, after all.  Santolouco’s back and in top form, too, so this is a good-looking comic (to put it mildly).

Grade: B- (as in, “But I’m a little more excited about next issue because of very childish reasons”.)
Posted by TMNT Entity at 12:03 PM