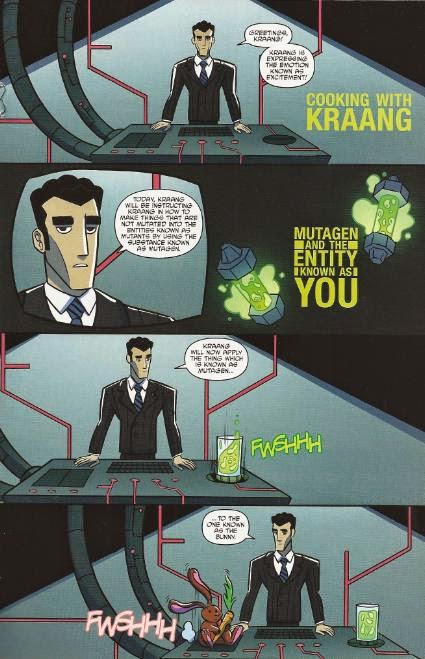 Filming an instructional video entitled “Mutagen and the Entity Known as You”, a Kraangdroid host illustrates how to create mutants by pouring mutagen onto a carrot-chomping bunny.  The bunny mutates into a horrible carrot-bunny-monster and  trashes the Kraangdroid cameraman. 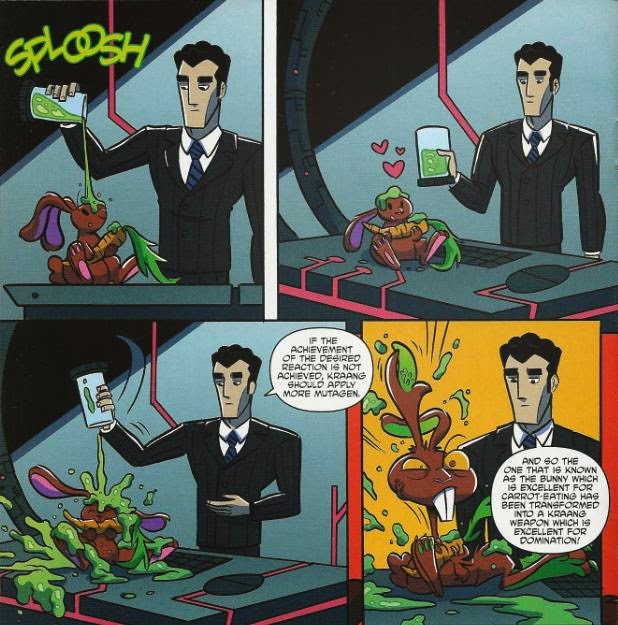 Suddenly, the Turtles, having followed their mutant tracker, barge onto the set.  Raph takes the host out with a blow to the face while Mikey and Donnie (mostly Donnie) work the control panel for the Dimension X portal.  Once the portal opens, Leo shoves the bunny mutant (whom he calls “Bad Bunny”, but Mikey alternatively calls “Hopzilla”) through the gateway.  Donnie shuts off the portal and the Turtles leave to get some pizza. 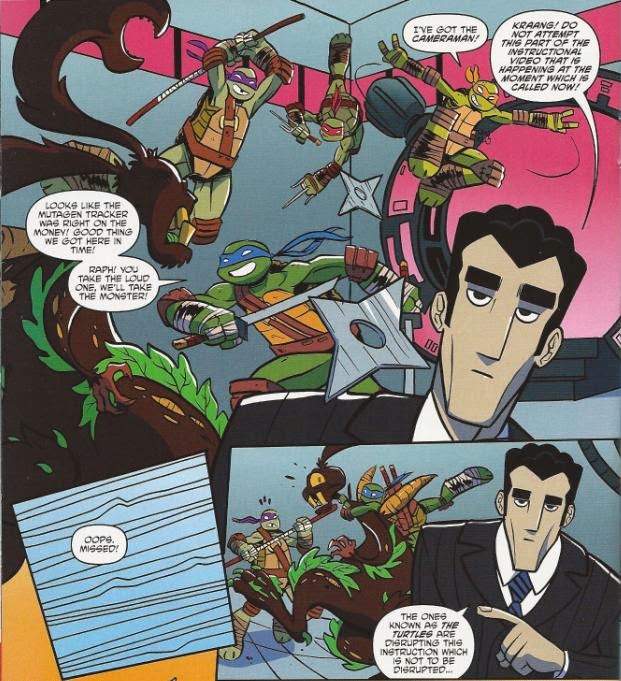 Once they’ve gone, the battle-damaged host shambles to his feet and ends the transmission.

*This story is continued from “Partners”.  The story continues in TMNT New Animated Adventures #12.

This back-up is a little longer than the last few New Animated Adventures has done, but used the extra page space wisely.  “Cooking With Kraang” is a fun idea, the whole “instructional video” thing, and actually relates back to a story from Panini’s Nickelodeon TMNT #8.  In that issue, “Dropzone”, the Turtles sneak into a Kraangdroid facility and traverse its weird rooms, one floor at a time.  In one such room, they find a Kraangdroid teaching “proper English” to a classroom full of other Kraangdroids.

I remember loving the gag and wishing that Panini’s TMNT Magazine format allowed for more page space, as I’d liked to have seen that joke fleshed out.  “Cooking With Kraang” is more or less what I asked for, as the Turtles interrupt a Kraangdroid as he dryly instructs other Kraangdroids on the ludicrous method to create mutants.

From an artistic perspective, Chad Thomas provides some light, goofy comedy visuals (like the cutesy-wootsy adorable widdle bunny wabbit with hearts over its head as it noms its carrot).  I think the only place the story falters on is that it begins from the camera perspective, but midway through discards the idea of being “footage” and steps outside that constraint and into the third person.  The last page attempts to go back to being “footage”, but loses the humor for having discarded the gimmick in the middle of the story.  I think the end result would have been stronger if the whole comic had been the recorded video.  If varying angles were an issue, they could have just added “Camera 1/2/3” designations to each panel.

But hey, that’s all I really have to criticize it for.  Actually, I thought this back-up was much more fun than the feature.