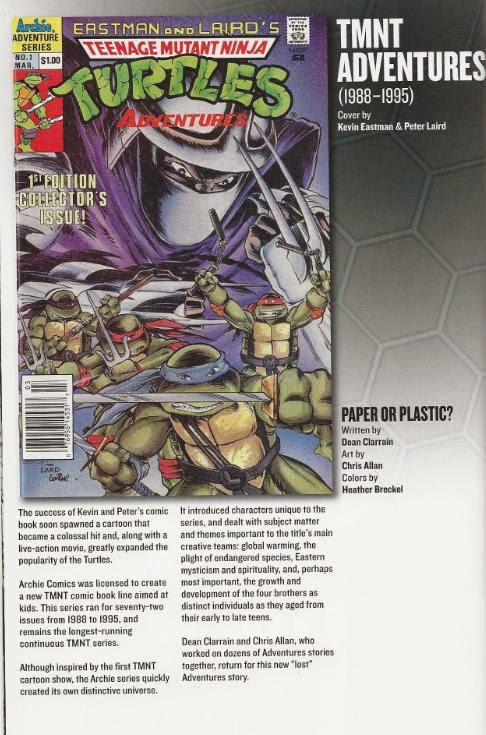 Leonardo, Donatello and Michaelangelo are hanging out in Central Park when they come across a spaceship.  Before they can figure out why it looks so familiar, they hear screaming coming from Columbus Circle.  After pushing their way through a frightened crowd (who think they’re aliens), they find the source of the commotion in an upscale grocery store: Bebop and Rocksteady. 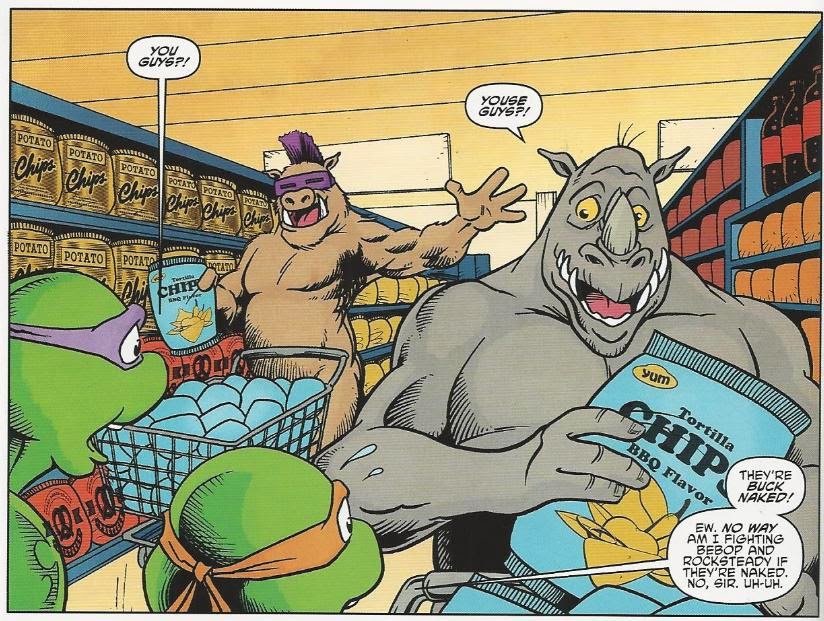 The Turtles are ready to fight, but Bebop and Rocksteady have only come back to Earth from their Eden World on a snack run.  The two mutant oafs swear that they offered to work off the cost of snacks by bagging groceries, but the the manager flipped out and hid behind the counter while all the customers broke into a panic.

Suddenly, Raphael and Ninjara arrive late to the scene and tackle Bebop and Rocksteady.  Leo orders Raph to stand down, as he’s found a nonviolent approach to this situation.  Raph defiantly blows him off for being too bossy and he and Ninjara leave to go find some action.  After getting an uncomfortable naked hug from Rocksteady, Leo pays for their groceries with Splinter’s cheese money and sends the two mutants on their way. 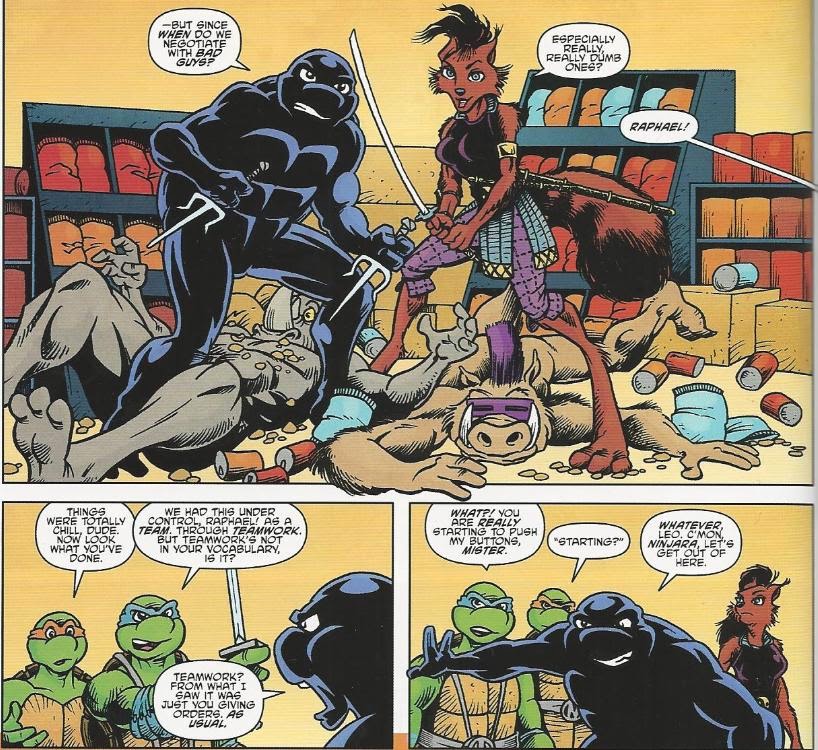 As Bebop and Rocksteady blast off in their spaceship, Don wonders if Splinter will be mad that Leo spent all his cheese money.  Leo suspects that their sensei will be understanding of the situation and happy that Bebop and Rocksteady have found a path toward inner peace.

*Raph last wore his all-black wrestling outfit in TMNT Adventures #37.  Why he’s wearing it here… I have no clue.

Well, this was about as authentic a TMNT Adventures story as you’re ever gonna get.  Clarrain’s (Murphy’s) script almost feels like a satire of itself, as the seven pages are just loaded with every TMNT Adventures-ism on the list: The story opens with an educational dissertation about Central Park followed by some thinly veiled disappointment with metropolitan expansion and its effects on the environment.  Mikey channels Clarrain’s disdain for “authority figures” by randomly threatening to pop open a can of whoop-ass on a security guard.  Then there’s Bebop and Rocksteady, who represent the futility of man trying to fit in with the natural world (they adore the splendor of their Eden World, but can’t bring themselves to part with corporately manufactured snack foods).  And a last minute finger-wag at both paper AND plastic grocery bags, as they’re BOTH bad for the environment and you should use neither, kids.

The script feels like it stepped right out of 1993, for better or worse, and it’ll be a solid trip down memory lane for all you TMNT Adventures enthusiasts out there.

For those less familiar with the tropes and clichés of Clarrain’s writing, it might not do much for you.  The weird educational non sequitor, the environmental and sociological messages… For those picking up this TMNT 30th Anniversary Special cold and without much knowledge of the series this story takes place in, those elements might require some context.  Luckily, the introductory blurb does its best to put things in perspective, stressing the educational and environmental angle of the TMNT Adventures series to curb the disorienting effect of the story.

There’s a lack of action which might disappoint some readers, but one of the better qualities of TMNT Adventures was that on occasion it would defy convention by actually circumventing violent resolutions and finding a better way (TMNT Adventures #11 being one of the best examples).  So again, Clarrain is in classic form with this script and it bleeds TMNT Adventures nostalgia from every crack.

And much of that is also thanks to Chris Allan, whom we all love and adore, I’m sure.  His art has lost none of its panache and this particular script highlights his skill at delivering humor over his skill at conveying bombastic action.  The way he carefully hides Bebop and Rocksteady’s junk along with his expressive characters make the pages fun to read even when nobody’s punching anybody (one of the most admirable attributes to TMNT Adventures, back in the day).

Raph and Ninjara make a completely gratuitous cameo spanning a whopping three panels (and Ninjara earns herself exactly one line of dialogue).  I want to say that Raph wearing his fan-wanky wrestling costume was Clarrain’s way of putting a lampshade on the “gratuitousness” of the sequence; a little self-awareness to play along with things.

Overall, “Paper or Plastic?” is a fun trip down memory lane and feels more like a “lost” tale than any other installment in the 30th Anniversary Special.  If you told me this thing had been completed in 1993 and simply languished in the archives until now, I’d believe it.  While it doesn’t do anything to “advance” the characters (Bebop and Rocksteady going on a shopping run to Earth is something they already did back in the Slash Trilogy, so this isn’t exactly a new territory for them), I can’t think of any reason why it should, either.  If you were expecting some sort of “Forever War” prologue or whatever then you only have yourself to blame.  This was a nostalgic piece more than perfectly befitting a nostalgic tribute special, and while it boasts all the same strengths and shortcomings of its long-gone title, that only makes it an even more authentic experience.

Grade: C+ (as in, “Come to think of it, maybe I should give this story an ‘A’ just because it DIDN’T show me Bebop and Rocksteady’s junk”.)
Posted by TMNT Entity at 5:43 PM