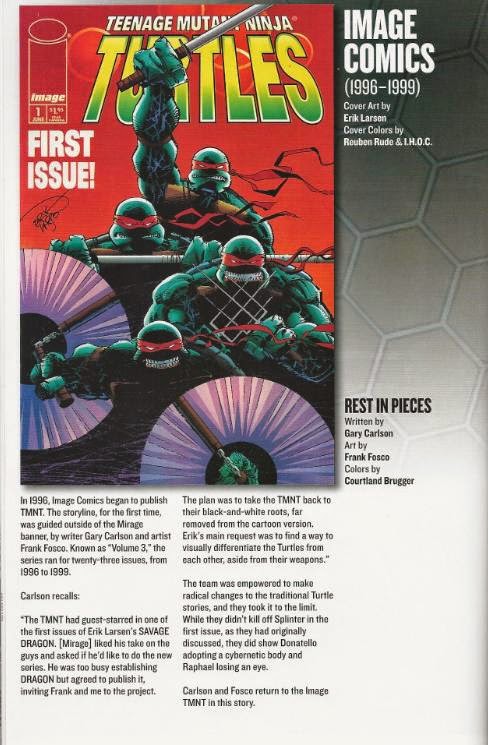 Down in the sewer lair, Mike has been languishing in a cast for seven weeks ever since his snowboarding accident with Casey.  On the bright side, it gave him plenty of time to finish his second book.  The Utrom Dr. X removes the cast (with the help of Don’s cyborg saw) and declares Mikey fit as a fiddle.  One-eyed Raph and one-handed Leo beg to differ, and tell Mikey that they’re going to whip him back into shape. 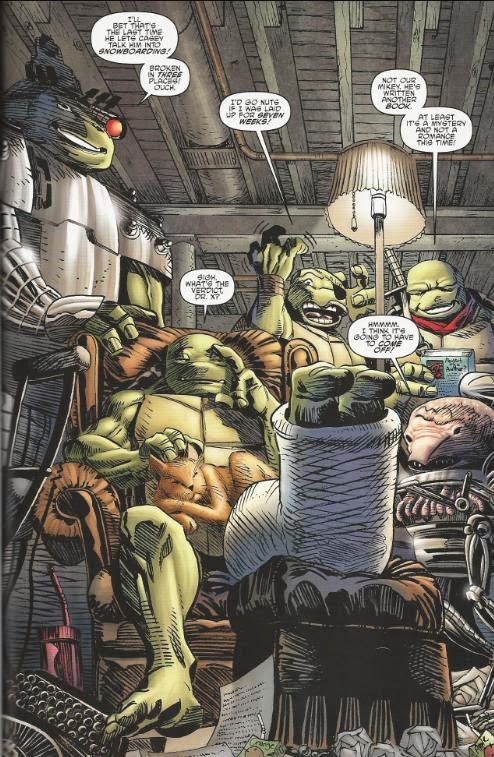 The Turtles go for a training run in the sewer (with Mikey barely keeping up) when they’re ambushed by one of the cyborg assassins Warlord Komodo hired way back when.  Not just any assassin, either, but the one that blasted off Raph’s face with a laser and was subsequently cut to pieces by Leonardo.  The cyborg explains that the living metal of his armor kept him alive in spite of the damage done to his organic body and now he’s stronger than ever. 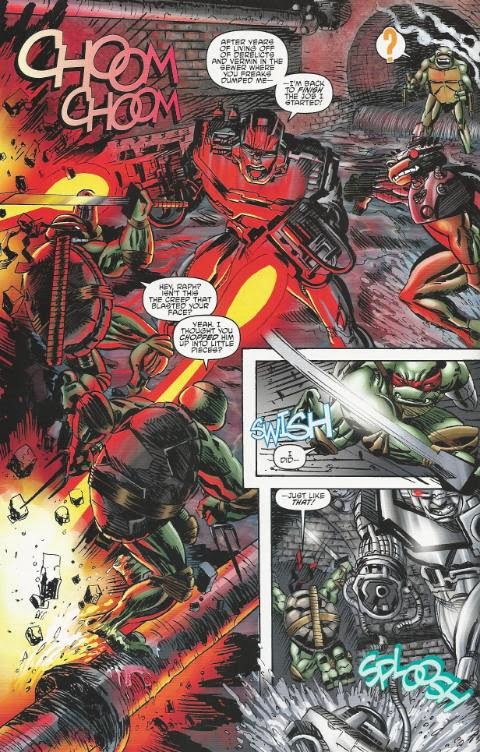 Leo and Raph figure that for him to be a cyborg, there must be a gooey organic center underneath all the armor and begin hacking away at him.  However, the cyborg’s armor repairs itself faster than they can cut away at it.  Donatello then confronts the cyborg, explaining that he mastered the living metal armor a long time ago.  Donatello then sucks away all the living metal and absorbs it into himself, reducing the cyborg to nothing more than a head.

Or so they think.  Mikey plucks up the head and finds it attached to a raccoon.  The cyborg explains that while his mind was uploaded into the armor, he still needed organic material to function, so he latched onto a raccoon.  Raph pushes Mikey away before the cyborg can blast HIS face off, too, which allows the cyborg raccoon-head to escape downstream. 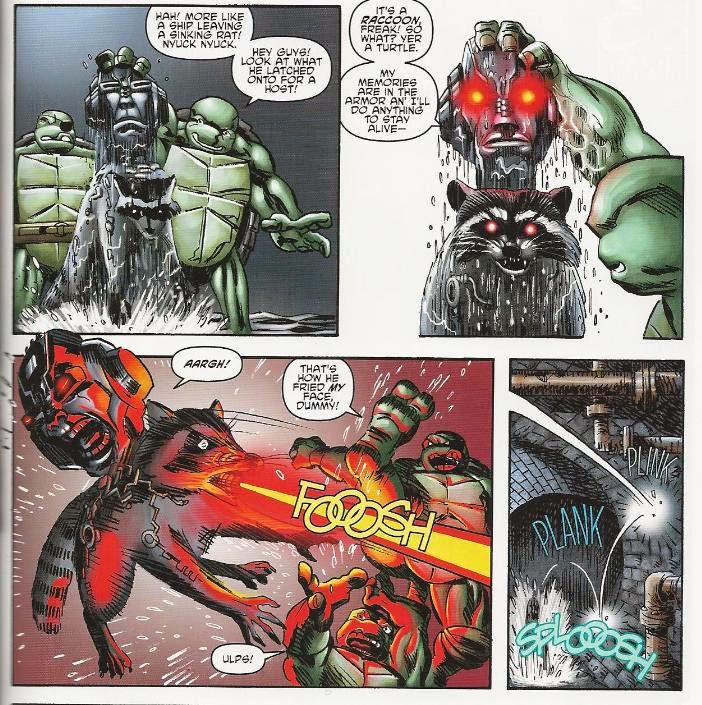 The Turtles chase after it, fearing what damage the cyborg could do if he latched onto a human host for organic parts.

*There really is no good place between issues where this story could “fit”.  It must take place after TMNT (Vol. 3) #18, as Leo is missing his hand.  However, the narrative from there on is too serialized to allow for the time span seen in this story (Mikey wearing a cast for seven weeks).  It most likely takes place sometime after TMNT (Vol. 3) #23, the end of the series.

The ‘90s are back and cyborgier than ever.

Although fans had recently gotten their nostalgia fix for the TMNT Volume 3 series a couple years ago thanks to the independently published TMNT (Vol. 3) #24 and TMNT (Vol. 3) #25, this was Carlson and Fosco back for a full story rather than script notes and guest art.  And it’s a fine treat.

Carlson picks a time during the series where the Turtles were all at their most “weird”.  Don’s a cyborg, Raph’s got an eye patch, Leo’s missing a hand and Mikey… is a published author.  Even an Utrom, Dr. X, is just bumming around the lair and playing nursemaid.  It’s a striking way to open the story; Carlson isn’t easing the less experienced fans into the Image universe, but rather he’s chucking them straight into the deep end.

“Rest in Pieces” doesn’t really pick up a “plot thread” from the first issue of the run, as that cyborg was pretty unquestionably dead in that issue.  Rather, it’s more a callback to that first issue by bringing him back for another round.  Carlson doesn’t play the cyborg up as any greater threat than he ever was (he’s still an idiot who thinks his armor is “magic”) and the Turtles cut him down to size with relative ease.  This is a short segment, after all.  It’s a fun romp in an old playground.

And of course you’ve got Fosco back on art and its wonderful stuff.  Fosco’s stuff looks terrific in color, which has been rare in regards to his TMNT work.  Brugger colorized his short strip TMNT vs. Spawn and also colorized his covers to TMNT (Vol. 3) #24 and #25, and he has a really tight synergy with Fosco’s pencils and inks.  “Rest in Pieces” is probably the most eye-popping of all the chapters in the 30th Anniversary Special, thanks to the bizarre character redesigns, the focus on action and Brugger’s glowing colors.

Most of the stories in this Anniversary Special are smaller tales in terms of both length and scale; obviously they aren’t going to have too much of a narrative impact on their respective universes.  They’re just fun, nostalgic reminders of the older TMNT books you probably read decades ago.  In that vein, “Rest in Pieces” hits all the marks.

Grade: A (as in, “And it deserves extra credit for including Klunk”.)