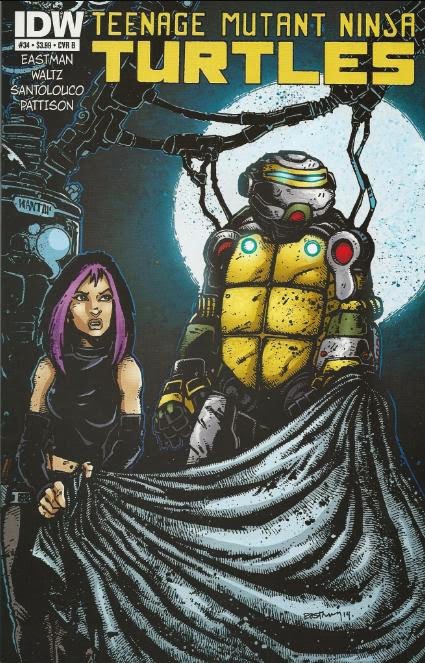 Outside the church lair, April and Donatello meet up with Casey and Angel.  Casey wanders off to be alone, but Angel goes with April and Donnie to return the anti-gravity gauntlets to Harold Lillja.  When they get there, though, Harold is furious that his tech has been damaged and even MORE furious that they invited a guest into his secret lab.  Angel attempts to introduce herself, but Harold dismisses her and calls her “Preschool”. 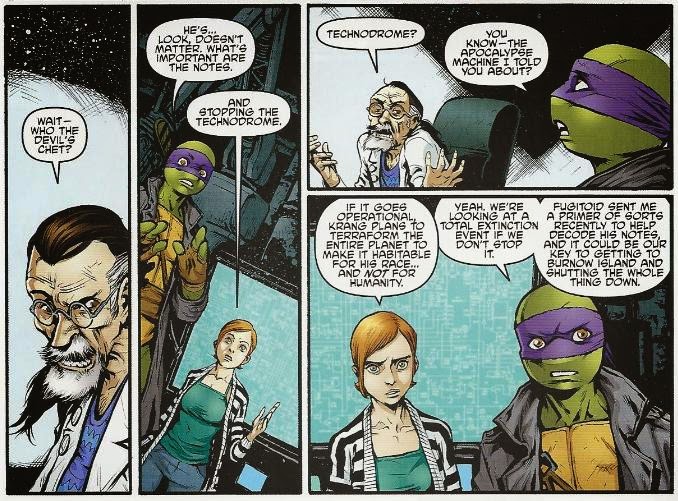 Donatello attempts to persuade Harold to help them decode the Fugitoid’s notes so they can stop the Technodrome, but Harold isn’t so sure he wants to risk sticking his neck out again.  As “Preschool” wanders around the lab, she finds an exo-suit Harold had built which includes various gimmicks like light-refraction, body armor, the anti-gravity gauntlets and grenades.  She also finds another one of Harold’s projects: A robot Ninja Turtle.

Down in the lair, Leonardo and Splinter are discussing strategy.  Splinter feels that the Turtles are becoming distracted with General Krang and the Technodrome when they should be focusing their energies on the Shredder and the Foot Clan.  Leo agrees that the Shredder is a threat, but he feels that Krang’s plot is of a larger scope and thus a higher priority.  The argument becomes heated as Splinter insists that while Krang poses a threat to the world, Shredder poses the most immediate threat to his family. 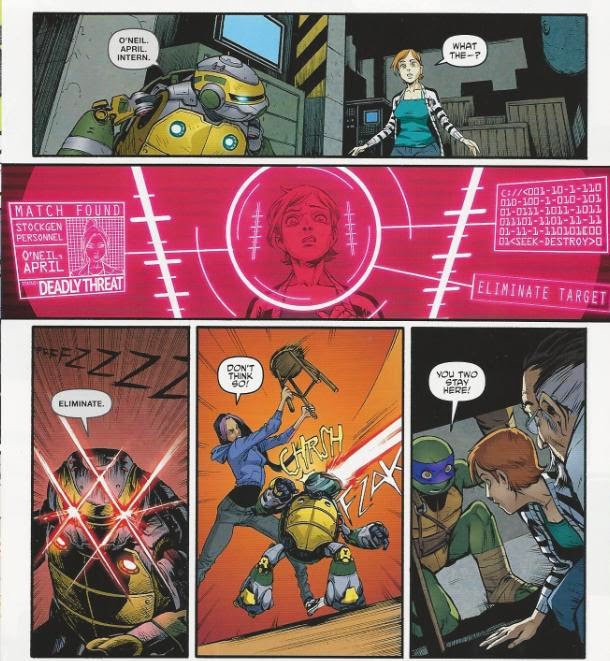 Back at the lab, Harold explains that after Donatello saved him from Baxter Stockman, he felt he needed some security for his own good.  He built the robot turtle in Donatello’s likeness as he believed Donatello possessed all the right physical attributes necessary to adapt into an android.  Angel dubs the robot “Metalhead”, but Harold isn’t impressed.  The two get into an argument and Harold is goaded into activating Metalhead, even though it hasn’t had all the bugs worked out.

Metalhead designates April a threat and attacks her.  Apparently, in his paranoia, Harold input the entire Stockgen staff list into Metalhead’s programming as potential security threats; April included.  Harold attempts to shut Metalhead down, but the robot destroys its own remote.  April and Harold run for cover as Metalhead activates a payload of weaponry, including a flame-thrower, the anti-gravity gauntlets, a machinegun and lasers in both his fists and eyes.  Finally, Metalhead transforms into a four-wheeled battering ram mode and begins trashing the lab.  While this is going on, Angel dons the exo-suit and uses its various functions to eventually put Metalhead offline.  Impressed with how “Preschool” handled the exo-suit, Harold asked if he could get her name again.  Angel replies by saying that she’s just a nobody. 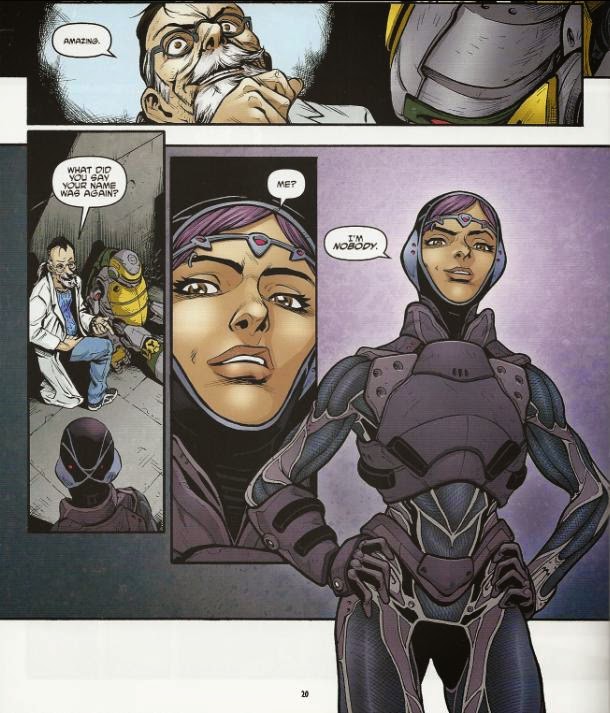 Elsewhere, Lindsey from Stockgen is talking on the phone with her mom while on the way to her car.  Apparently, she’s had trouble finding a job ever since Stockgen blew up, as most of her references have vanished into thin air.  She’s approached by Old Hob and Slash, who offer her a "job" at gunpoint.

*Lindsey last appeared in TMNT (IDW) #15, where she was attacked by Slash.

*This issue also included a bonus look at Metalhead’s character model by Santolouco.

Metalhead!  That old school TMNT character that’s been making a big comeback these past two years, but never really went away.

The idea of a robot Ninja Turtle managed to survive the end of the Fred Wolf cartoon and the original Playmates toyline.  The “Turtlebot” appeared in the 4Kids cartoon and its accompanying Konami video game, while a similar creation called the “Turtlenator” was set to appear in the Dreamwave TMNT comic before it got mercifully canned.  While they weren’t properly "Metalhead", well, they were robot Ninja Turtles so they might as well have been.

But the 2012 TMNT cartoon from Nickelodeon brought Metalhead back as Metalhead and he’s gotten perhaps more development in that show than any other character (I ain’t lyin’).  Now he’s showing up in the IDW comic and I couldn’t be happier.  He was one of those characters from back in the day that I really liked, even if he only appeared in 2 episodes of the cartoon and I think only one of the original Konami video games (Turtles in Time) and then nothing else.  His action figure was bitchin’ and that’s all a 6 year-old really needed.

I enjoy the character of Harold Lillja as he helps alleviate the burden from Donatello when it comes to being the convenient genius with a mastery of every scientific discipline on the books (or "the MacGuffin Dispensary").  Donatello is still smart and capable and handy with a computer, but he isn’t overloaded with skill to the point where he can straight up build things like robot Ninja Turtles or exo-suits (or Party Wagons or Turtle Blimps or Shell Cycles or Sewer Sliders or Shellraisers or you get the idea).  He still has to seek out others to assist him in these wilder areas of technological ability and it makes him feel more on par with his brothers instead of light years ahead of them.  And adding that extra step means his techno-savvy won’t be a convenient solution to every situation.

In addition to Metalhead, another longtime TMNT character makes their surprise IDW debut: Nobody.  It was a clever bit of misdirection on IDW’s part, promoting the Hell out of Metalhead for the past 6 months in all their solicits but not making a peep about Nobody.  I was irritated, as one of my biggest pet peeves with IDW is how they’re constantly spoiling their own stories half a year in advance, and having the debut of Metalhead ruined before the Christmas decorations were even down left me feeling grouchy.  But the ends wound up justifying the means and we still got a surprise reveal in this issue.

Like Metalhead, Nobody’s a character I like who hardly ever got jack shit to do in the media.  The 4Kids cartoon probably treated him with the most dignity, while the Mirage comics scarcely utilized him at all before unceremoniously killing him off in the dumbest way possible ("eaten by a starfish").  Angel evolves into Nobody beginning with this issue (or so I gather) and it’s a fusion of existing characters similar to how IDW’s Slash happens to look like Tokka.  We’ll see how it goes, but it could be neat.  It’s a total departure from the original Nobody (and I’m not just talking about gender), but Angel has been a character IDW’s been trying their best to cultivate since nearly the start of the book (as 4Kids didn’t exactly give them a heck of a lot to work with).

We’ve also got other turmoil going on in this chapter; Casey sulking about Hun, Leo and Splinter butting heads over priorities and Lindsey (remember her?) getting kidnapped by Hob presumably for the purpose of creating his mutant army.  That last one was the big hook (and I’m psyched), but the two-page dialogue between Leo and Splinter was pretty great.  I love stories that try to expose some of Splinter’s seams and by the looks of it the wise old sensei is letting his emotions and personal vendettas blind him from the big picture.  That it’s Leo questioning his priorities is just gravy.

So this was a wonderful chapter, maybe a little corny in places (Angel’s declaration of her new identity), but it’s got a lot of strong personalities and man oh man if Santolouco didn’t just KILL IT on that fight with Metalhead.  There’s a pair of two-page spreads back to back and with equal doses of action and humor across their numerous panels.  Harold is hilarious in this issue thanks mostly to the wealth of reaction faces Santolouco creates for him.

So if last issue left you feeling cold in the action department, this one cranks it up a notch.  We’ve got familiar characters making their comebacks and some surprise melodrama where you might not expect it.  A solid chapter that was worth the extra month we all had to wait for it (what was up with THAT, anyway?).

Grade: B+ (as in, “By the way, vehicle-mode Metalhead has the Party Wagon’s spoiler.  That might actually round this grade up to an ‘A’ just on principle”.)
Posted by TMNT Entity at 8:38 PM