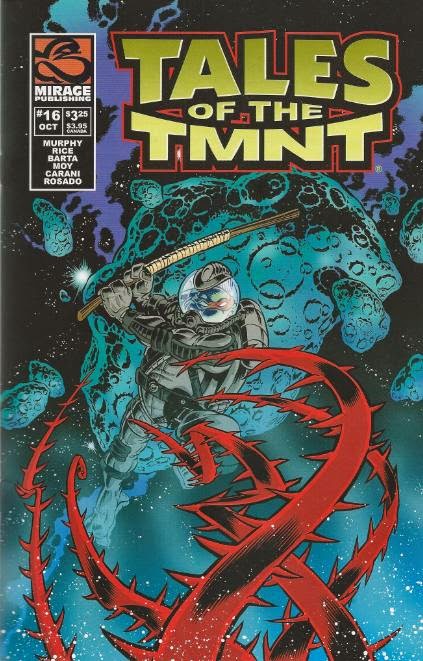 “Sins of the Past”

Frontispiece: Staring intently at his computer, Donatello thinks about the things he’s read in books like The Coming Global Superstorm by Art Bell and Whitley Strieber, as well as the things he’s heard on National Public Radio.  He comes to the ironclad conclusion that global warming is real and is the fault of mankind for mistreating the environment.  Exasperated, Don grows weary of all the fools who refuse to accept the truth…

Along with the Fugitoid, Donatello has traveled to the Utrom Homeworld to study their data on global warming.  He fears that mankind (who he refers to as a “malignancy”) will soon destroy the Earth with pollution and deforestation and wants to see if there’s any solution.  Leaving the Homeworld with the data he’s collected, Donatello takes a new Utrom spacecraft for a spin.  Recklessly, he speeds through the galaxy with the faster-than-light drive, worrying the Fugitoid and his Utrom chaperone, Vaschin. 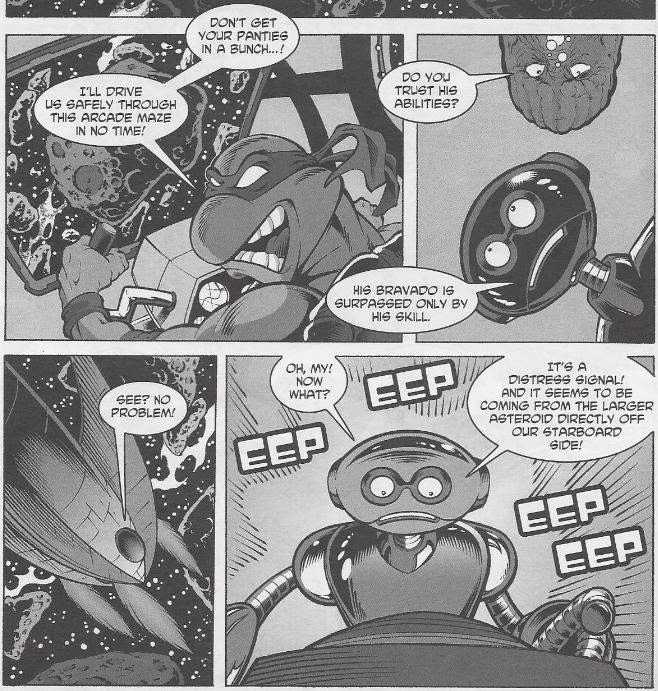 The ship eventually arrives on the edge of known space; a restricted area as per all intergalactic federal laws.  Suddenly, they receive a distress signal from a nearby asteroid and Don insists they check it out, much to Vaschin’s disapproval.  Only sanctioned rescue ships are allowed to respond to distress beacons, but Donatello insists that sometimes it’s necessary to break small laws in order to right bigger wrongs.

Donatello, the Fugitoid, Vaschin and a unit of Utroms disembark on the asteroid and begin following the signal.  They enter a cave where they find a ship that the Fugitoid says looks familiar.  He thinks he’s seen pieces of its design in museums on D’Hoonib, but can’t be sure.  Vaschin is nervous and insists they leave, but Donatello refuses to back down and they go inside. 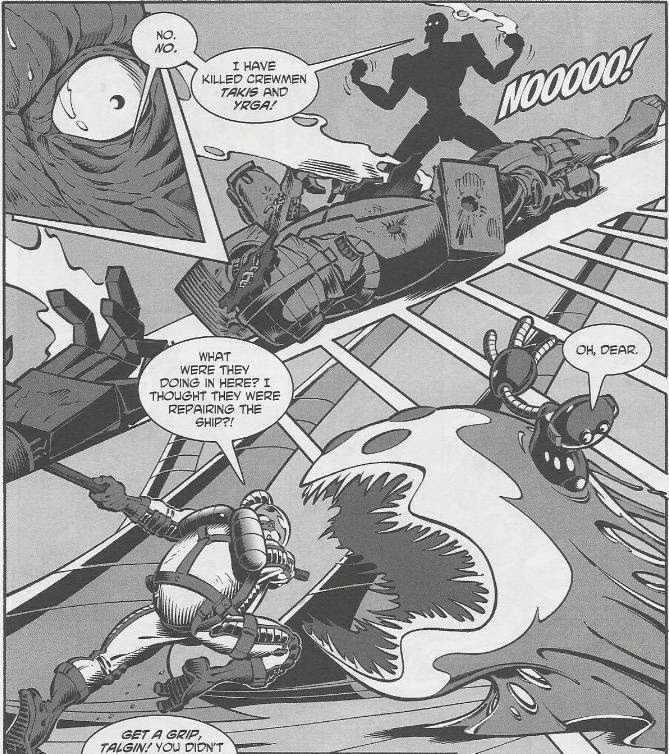 After only a few minutes, Vaschin gets nervous and begins opening fire at shadows.  Donatello asks why he’s so heavily armed for a rescue mission, but Vaschin says he’s just being cautious.  The Fugitoid finds an Utrom skull and Donatello becomes even more suspicious.  Suddenly, they’re attacked by several gelatinous, tentacled blobs which Vaschin recognizes as the J’Gel race.  There’s a big fight and all the Utroms but Vaschin, and all the J’Gels but one, are killed.  Before Vaschin can kill the J’Gel, the Fugitoid activates his translation programs and asks the J’Gel to tell its story.

According to the J’Gel, its race was a simple people concerned only with survival.  They had the ability to absorb the knowledge of all they consumed, but their propensity for overconsumption and over-breeding nearly destroyed their homeworld and drove them to extinction.  When the Utroms made first contact with them, the J'Gel absorbed their space-faring technology and began spreading across the galaxy, absorbing and destroying other worlds.  The Utroms then began an operation of total racial extermination, hunting down and killing all J’Gels, then wiping all knowledge of their existence (and their activities) clean.  His ship contained the last J’Gels and they were able to hide in the asteroid ruins of their homeworld (which the Utroms destroyed) for thousands of years. 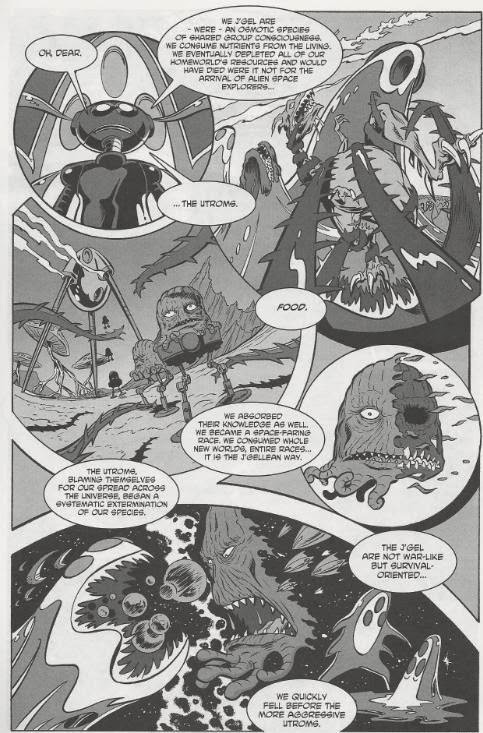 Against Vaschin’s wishes, Donatello and the Fugitoid leave the J’Gel to live alone in peace.  As their ship takes off, Vaschin separates in the escape pod.  Donatello tells him to come back, but Vaschin uses Don’s own words against him, saying that it’s better to commit a smaller crime if it means righting a greater wrong.  Believing the J’Gel are too dangerous to let even one live, he flies his pod into the asteroid, killing himself and the last J’Gel.  Melancholy, Donatello and the Fugitoid return to Earth.

*More of the Utroms’ unsavory past will be uncovered in the story “First Mud”.  A gelatinous, tentacled creature will be seen on a forbidden planet in that story, though whether it is related to the J’Gel is unknown.

Oh fuck it, I’ve complained about Steve Murphy using Tales of the TMNT as his soap box for environmental and political messages enough for one blog.  I’ll just say that nothing in my summary was an exaggeration.  In fact, I left out some details; this thing was a fucking SERMON.

Anyway, “Sins of the Past” struggles to convey some fascinating ideas by means of some very poor execution.

The idea that the Utroms aren’t the benevolent Nibblonians of the TMNT universe and actually have a pretty spotty history is one that Murphy explored throughout his Professor Obligado serial.  It was handled better in that tale, I think, but “Sins of the Past” does provide a little extra back story that may or may not impact the vagaries of the Obligado serial.  For instance, when Obligado locates the original Utrom Homeworld (hidden from all knowledge for millennia), he finds it to be a desolate mud puddle inhabited only by simple, gelatinous creatures.  I think the gist was that the J’Gel absorbed the original Utrom Homeworld and as part of their campaign to erase the J’Gel from history, the Utrom government concealed the existence of their original Homeworld.

That’s what I came away with, but none of this is stated in any of the text, so it could all just be drawing my own conclusions.

Yeah, the J'Gel were another one of Murphy's dime-a-dozen allegories for the plight of Native Americans: "noble savages" who were slaughtered by a self-proclaimed "civilized culture" which then tried to cover up their acts of mass genocide, blah blah blah.  It's practically a Steve Murphy-ism by now, I don't feel like dwelling on it.

The real problem with “Sins of the Past” which makes this potentially fascinating tale such a chore to read is how brutally out of character Donatello is.  If you look at that credits list, you’ll see that this story suffered from a bad case of “too many cooks” and I’m not really sure where things went wrong or who fucked up at what juncture, but Donatello is AWFUL in this story.

He’s irritable, reckless, casual and rebellious; at a glance, you’d think he was Raphael.  In the letters page of a future Tales issue, someone even brought the matter up.  In the letters page of Tales of the TMNT (Vol. 2) #25, Murphy explained that Donatello had "his mood darkened" because the Utroms were lying to him, hence his bad attitude and weird characterization in this story.  That explanation doesn’t exactly hold water, as Donatello BEGINS this tale with Raphael’s personality and it runs deeper than just his being “angry”.  He says things Donatello would never say, like “don’t get your panties in a bunch” and even makes “…NOT!” jokes, because that’s totally something Donatello would do, right?

And jeez, this comic was published in 2005 and the writers still thought it was hip to make “…NOT!” jokes?  Really?

The result is something that’s just bewildering to read.  It feels very patchwork, no doubt a result of all the creators trying to get their licks in, vetoing and contradicting one another during the creative process.  So we end up with this "Turtle" that’s a weird amalgamation of two characters (while his dialogue is the Raph-esque rebel routine, his inner monologue is the typical pontificating Don stuff about the environment and science).

Not helping matters is the artist: Doug Rice.  He’s an Old Boy who goes back to the black and white indie comics scene of the ‘70s and ‘80s, so he has a style that looks noticeably “old fashioned”.  That isn’t the problem, though; I LIKE “old fashioned”.  The problem was that Doug Rice draws Donatello in the same way many of the guest contributors drew all the Turtles for Mirage back in the ‘80s; this vacuous, corporate mascot look.  Donatello is endlessly sneering and grimacing and scowling like the Turtles did on all those action figure packages and trading cards and he cannot emote beyond teeth-gnashing and brow-furrowing.  Combine that look with Donatello’s preposterously un-Donatello-like dialogue, and you have a comic that refuses to make sense regarding its star character.

Donatello aside, Rice’s other art looks just fine.  The Utroms, the Fugitoid, the backgrounds, the layouts… it all looks great.  Very dynamic stuff and I especially liked the off-kilter geometry of the J’Gel spaceship interiors.  The four inkers and toners worked together rather well and it doesn’t have that feel of “this guy clearly inked this page, that guy clearly inked that page” which usually comes about when a quartet of inkers tackle a single issue.

I’d like to say that “Sins of the Past” needed another pass by the editor before going to the art phase, but Steve Murphy WAS the editor on this book!  It’s just hard to believe that Donatello could be written so puzzlingly out of character and that no one publishing the story “noticed”.  There are some good ideas in here and on a basic level it’s a nice companion piece to the Professor Obligado serial, but the execution does its level best to ruin everything.

Grade: D+ (as in, “Donatello was just mad because everyone on Earth is stupid but HIM”.)
Posted by TMNT Entity at 12:12 PM