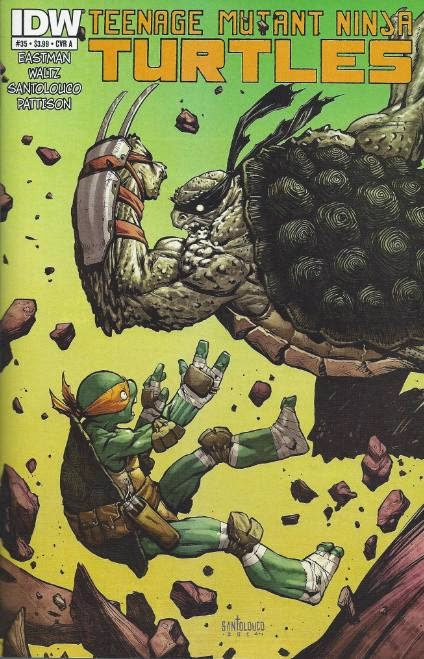 After procuring some pizzas from Woody, Mikey and Raph head over to Old Hob’s apartment/HQ to see if they can’t get on his good side.  Raph doesn’t exactly care for this alliance, but Mikey is confident that there’s good in Hob despite all their altercations in the past. 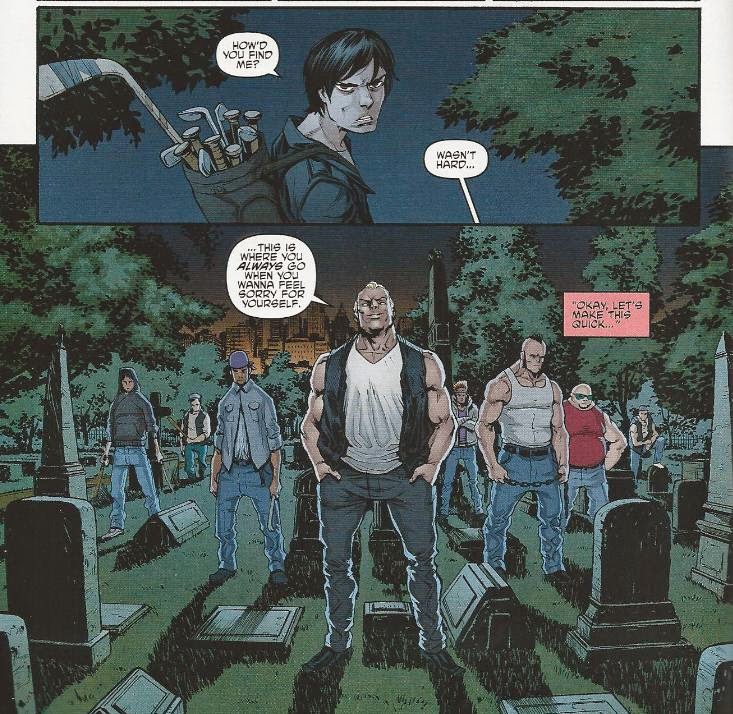 At a cemetery, Casey is standing over his mother’s grave and reminiscing about how proud she was when he got his hockey scholarship.  Suddenly, Hun and the Purple Dragons show up and they mean business.

At Hob’s apartment, Mikey waltzes in with the pizzas (which greatly pleases the dunderheaded Slash).  The Turtles are then sprung with two surprises.  The first is a moronic pigeon mutant named Pigeon Pete; the first of Hob’s failed attempts at making a mutant army.  The second is Lindsey Baker, the Stockgen employee Hob kidnapped. 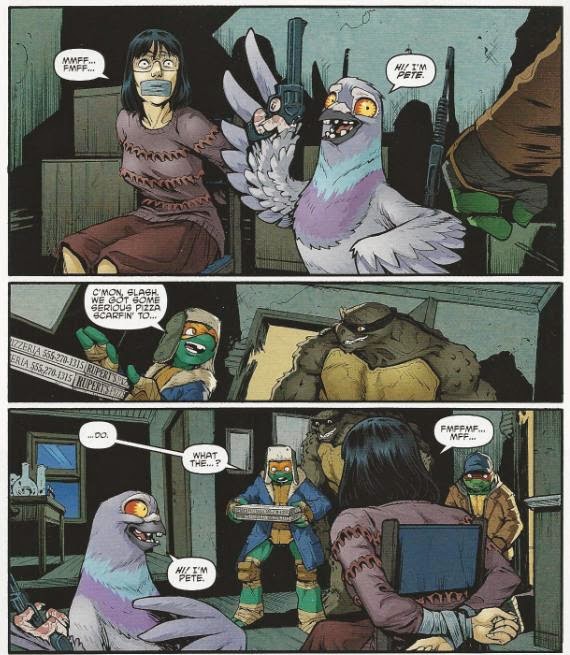 Back at the cemetery, Hun tells Casey that he gave him his chance to either join him or leave.  Now, he has no choice but to kill him since he chooses survival over being eliminated by the Shredder.  Casey isn’t surprised and puts on his mask.  Several Purple Dragons attack him and he takes them down.

Back at the apartment, Mikey and Raph aren’t too thrilled with Hob’s methods of building his army.  Hob explains that he had no choice, as creating mutants requires serious knowhow (and Pigeon Pete is proof of that).  And at any rate, he says that Lindsey isn’t as innocent as they think, as she was knee-deep in all of Stockgen’s illegal research and experimentation and is partially responsible for tormenting Slash and even Splinter (when Stockgen had him held captive).  Despite that, Raph cuts Lindsey loose and encourages Hob to try and recruit her “politely”.  To that end, Hob pulls out a syringe of Splinter’s blood which immediately capture’s Lindsey’s interest. 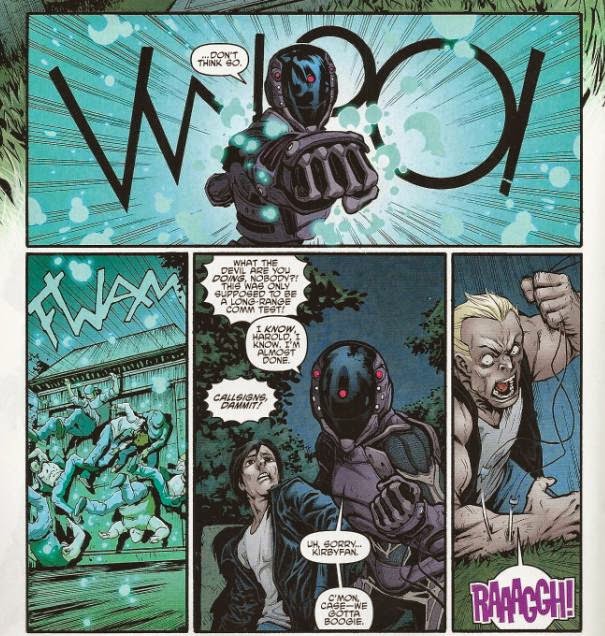 At the cemetery, Casey has been worn down by the Dragons and Hun is about to deliver the finishing blow to his ex-son.  Before he can strike, he’s violently tased by Nobody, who is taking Harold’s new exo-suit out for a test run.  Using the anti-gravity gauntlets and lasers, Nobody keeps the Dragons and Hun at bay, then escapes with Casey.

At the apartment, Lindsey explains that the psychotropic serum was a key ingredient in creating mutants with higher intellects.  When Splinter and the Turtles were lost in the Foot break-in, the psychotropic serum was lost with them, which is why their further experiments (Slash) proved uncontrollable.  Lindsey says she’s willing to work with Hob to continue her own research, but on the condition he provides her with a better lab and months to prepare.  Overhearing the story, Slash decides he doesn’t want to wait months and wants to be smart NOW.  He snatches up the syringe and injects himself with Splinter’s blood (and the psychotropic serum).

Slash goes out of control and begins attacking everyone.  While the Turtles try and keep him at bay, Hob grabs a powerful taser gun and subdues him.  The jolt brings Slash to his senses and he eloquently apologizes for his behavior.  Lindsey and Hob are pleased to see that they’ve found the key to making mutants. 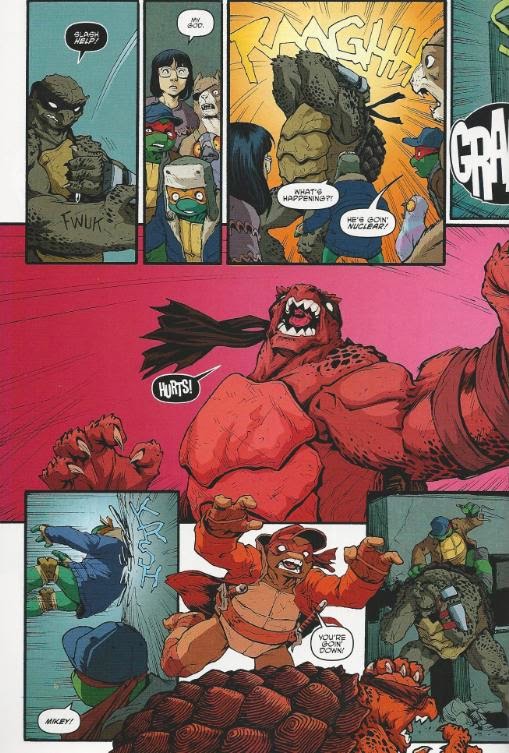 On a rooftop somewhere, Nobody reveals her identity as Angel (though Casey had already figured it out).  She says that she guessed Casey would be at the cemetery since he always goes there when he’s depressed.  Angel tells Casey not to give up hope just because he’s lost his dad.  Rather, he should try to forget the “losers” in his life and move forward down his own path, like she has.

Down in the sewer lair, Leo and Splinter are continuing their discussion, seemingly unaware that several glowing red eyes are watching them from the darkness.

*This issue also included a model sheet of Angel as Nobody by Santolouco.

*This issue was originally published with 4 variant covers: Cover A by Santolouco, Cover B by Eastman and Pattison, Cover RI by Ken Garing, and Cover RE Kevin Eastman Fan Club SDCC exclusive by Eastman, Peter Laird and Steve Lavigne.

Ha!  Pigeon Pete!  I guess IDW got me again with a character reveal I didn’t see coming.  Hey, I’m not complaining.  I relish any surprises I can get, these days.  Pete was a one-off gag character from the Nick show and so far there haven’t been many Nick references in the IDW book, making his inclusion truly a surprise.  And all things considered, this comic was in dire need of a little levity, so a goofy character like Pete goes a long way.

It’s agonizing build-up, but it represents a sort of consistent internal logic that maintains the integrity of this universe.  It also helps to construct the character of Hob, who up until now hasn’t done much of anything but talk big about his plans.  We’re getting a bead on this guy and he’s definitely setting himself up as a self-made villain (or antihero).  He’s been WORKING for this and we’ve been following him every step of the way for over a year.  HIS payoff is OUR payoff and there’s something to be said for that.  No, Hob isn't a smart guy or a strong guy, but he knows how to surround himself with smart people and strong people, which makes him manipulative and clever.

I also dug Mikey’s and Raph’s reaction to stepping in on the whole hostage situation.  Rather than immediately escalate to a fight, the Turtles hear Hob out and consider his side of the situation; Lindsey is hardly the victim you might take her for on face value.  Even Raph pragmatically works through the matter in his head, realizing that Hob’s mutant army might come in handy regarding Splinter’s war with the Foot Clan.  And, like it or not, they DO need to maintain their alliance with Hob.  It’s a “deal with the devil” scenario that incidentally fits in perfectly with Old Hob’s name.  Likewise, it harkens back to that conversation the Turtles shared from TMNT #33 where they explicitly state that they aren't heroes (hence how they're willing to look the other way in regards to Hob's illegal activities).

Slash finally has two brain cells to rub together and I’m good with that.  Lumbering numbskull villains get really old, really fast and the IQ booster gives Slash some opportunities to grow.  Maybe he’ll end up like the Corey Feldman incarnation from the 2012 cartoon who is a kinda-sorta antagonist with more of a skewed moral compass than a truly malevolent personality.  And since this Slash is already a fusion with Tokka, maybe we’ll be seeing Rahzar sometime soon.  One can only hope.

Casey’s story was the weak point of the issue and it continues a trend I’m downright sick of at this point: Casey getting trashed and having to be rescued for dramatic value.  Jeez, when was the last time he was a fucking badass in this book?  The 2012 Annual?  Yeah, he puts up a good fight, but he still loses and has to have his fat pulled from the fryer at the last second (incidentally, shouldn’t Casey have also been electrocuted by that taser since Hun was holding him when he got zapped?).  Casey needs to bust some heads and come out on top for a change; it’s been long enough.

But at least Angel is growing and improving as a character.  You really SHOULD follow her lead, Casey.  At least she knows how to win a fight once in a while.

On the off chance that last rant sounded too bitter: The cliffhanger has me psyched.  Aw yeah, my all-time favorite TMNT villain is just around the corner!  (Both literally and figuratively.)

Grade: B (as in, “But now that we’ve got Pigeon Pete and Slash building up Hob’s army, the possibilities are endless.  I’ve got my fingers crossed for Pizzaface!”)
Posted by TMNT Entity at 6:24 PM