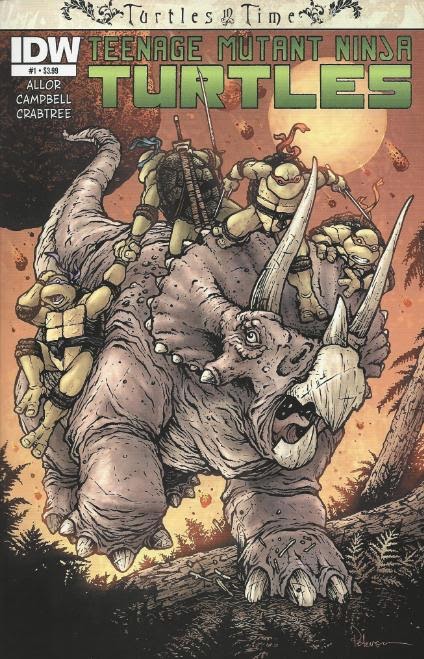 On prehistoric Earth, the Turtles are running from a stampede of dinosaurs.  Turns out the dinosaurs are running from several Utrom hunters riding armored hydrosaurs.  The Utrom hunters nab Raphael with a gooey net and drag him off, leaving the other three Turtles to run screaming from a T-rex.  The Turtles take cover in a cave and Donatello postulates that the T-rex was just protecting her nest, not looking for chow.  He’s right and once the T-rex shuffles off, the Turtles go looking for Raph. 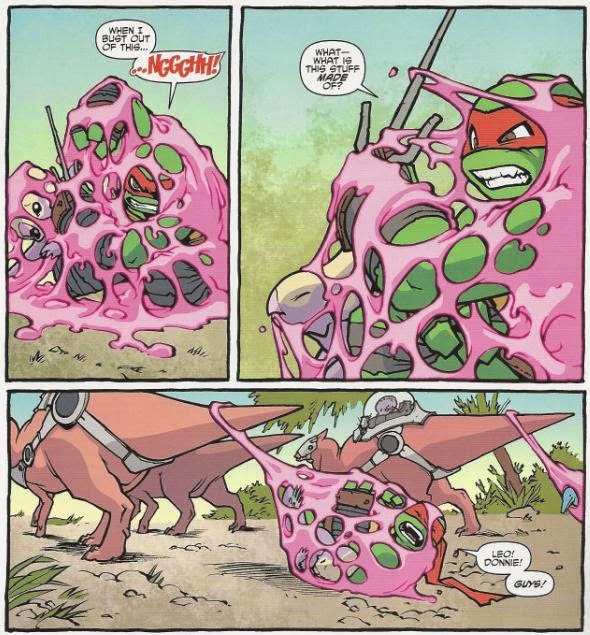 They’re confused as to how they wound up on prehistoric Earth, as the last thing they remember was training at home.  Suddenly, Renet appears through a temporal portal and is glad to have found her friends.  They try to get the skinny from her, but her time scepter starts malfunctioning and as quickly as she came, she disappears (off to find a repairman).  The Turtles are left with no more answers than they had before. 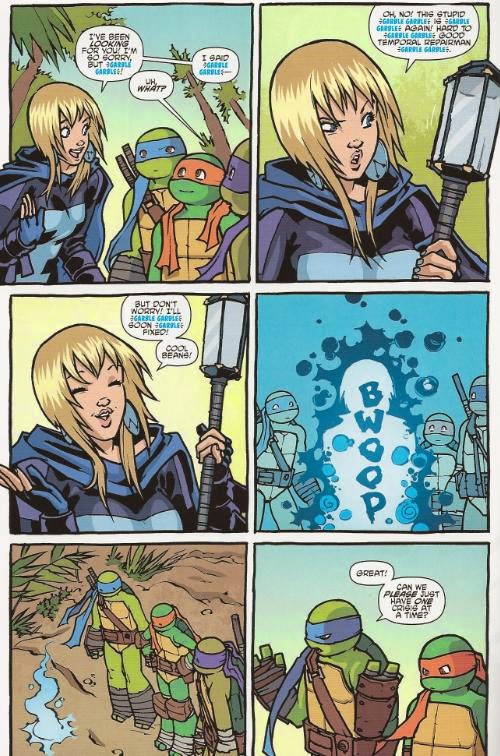 At the Utrom camp, the scientists are examining Raph and determine that unlike the other reptiles, he’s actually intelligent.  As they discuss the diplomatic crisis that could result in their actions, the other Turtles find the camp and Mikey comes up with an idea on how to free Raph.

In his cage, Raph befriends a baby protoceratops named Pepperoni and gives her a little bandana made from his leg-wrappings.  Suddenly, Mikey swoops down on a pterodactyl and dumps rocks on all the Utroms.  As they scatter in confusion, Leo takes out their robot bodies while Donatello frees several of the dinosaurs.  By the time he frees Raph, Leo has the Utroms bound. 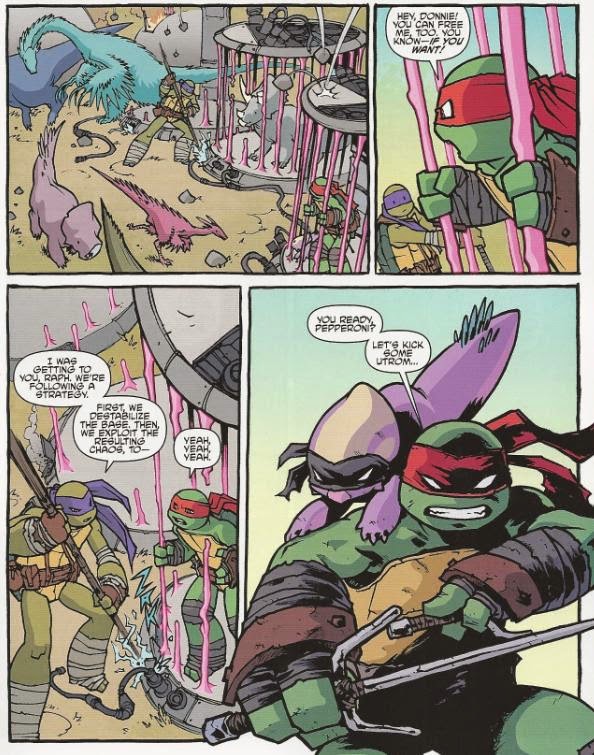 Before they can get to the bottom of things, the Utrom military transport team arrives and starts shooting at the Turtles.  Donatello has an idea and leads the Utroms to the T-rex nest.  As the Turtles hide, the Utroms run in terror from the angry carnivore.

That evening, in a cave, the Turtles cook a pizza made from roughage and ponder if they’ll ever get home.  Suddenly, they vanish into thin air (leaving the pizza behind for Pepperoni to munch on). 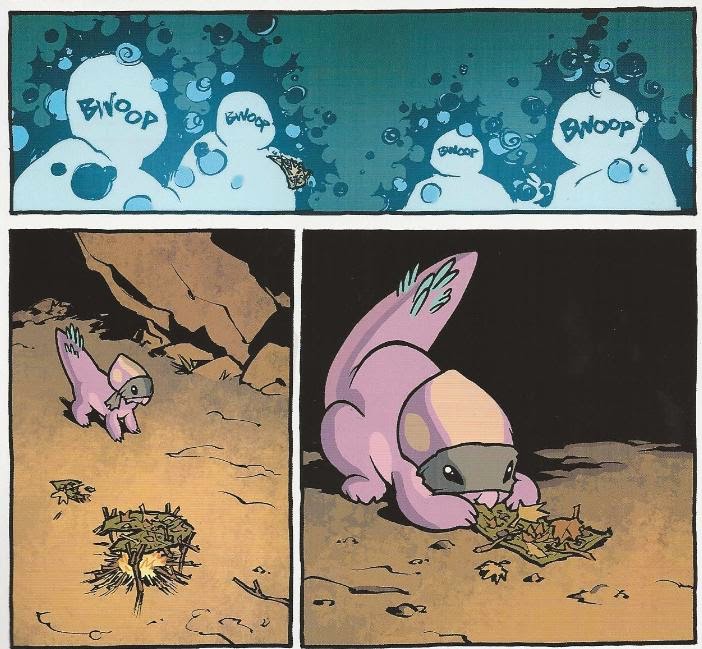 At the Utrom camp, the scientists and military are impressed with the fighting potential of warrior reptiles and feel Ambassador Quanin should be told of their existence immediately.  One scientist says that recruiting such warriors might be too much of a hassle, and looking at a triceratops in one of the cages, comes up with a better idea.

*The story continues in TMNT: Turtles in Time #2.

*According to editor Bobby Curnow, the events of this miniseries occur concurrently with TMNT (IDW) #37.

*The Utroms were shown collecting dinosaurs on Earth for genetic experimentation in TMNT: Utrom Empire #1.

*Leo mentions their fight with General Krang from TMNT (IDW) #20.

*Two of the Utroms from this issue, Yoom and Churk, will return in TMNT (IDW) #58.

*The Turtle will return to the Cretaceous in TMNT: Bebop & Rocksteady Destroy Everything! #2.

*At the time this issue was published, TMNT Annual 2014 had not been completed and would not be published for several months.  The opening recap (cheekily) cops to this and assures readers that the confusion is all part of the narrative experience.

Turtles in Time looks like it’s going to be a tonal antithesis to Allor’s last miniseries, Utrom Empire.  Whereas that one was brimming over with political intrigue and heavy moral quandaries, Turtles in Time is just a lot of goofy, lighthearted fun.  Or it is so far, anyway.

The Turtles take to their situation with a snarky sense of humor and everything is played for laughs.  There are a few running gags in this issue and the entire tone encourages you to relax and just go with the madness.  How did Michelangelo learn how to wrangle and ride a freakin’ pterodactyl?  Who cares!  It was just supposed to be cool.

Apparently TMNT Annual 2014 was supposed to set some of this stuff up, at least regarding how the Turtles know Renet, but that thing isn’t going to be hitting the shelves anytime soon (editor Bobby Curnow says mid-August at the absolute earliest).  Be that as it may, the miniseries is intended to open in medias res, with the characters as confused as the readers, so the fact that it was published out of sequence isn’t a deal-breaker by any means.  And all you people out there reading this review for the first time two years after the issue’s publication, it isn’t even a problem.

Ross Campbell’s style is a solid fit for the irreverent attitude of the story and he nails all the running gags.  The shtick involving rock-throwing would have fallen flat with the wrong artist, but Campbell’s sense of layout and expression makes it cute instead of annoying.  He also draws all the dinosaurs with feathers in an attempt at paleological accuracy.  A nice gesture and I’ve no qualms with feathered dinos, though if we’re getting fussy about “accuracy” then the Turtles should have had trouble breathing in the late Cretaceous period, what with Earth’s oxygen levels being totally different, but what did I say at the start of this review?  Relax.  It’s supposed to be fun.

The jokey nature of the issue also means that you’ll breeze through it really fast, but Campbell’s art will also have you flipping back over the pages and digesting each panel for detail, so it evens out.  Really, the issue’s biggest mistake was leaving Pepperoni behind on prehistoric Earth.  That was a cruel tease and I demand she return as IDW’s answer to Klunk.