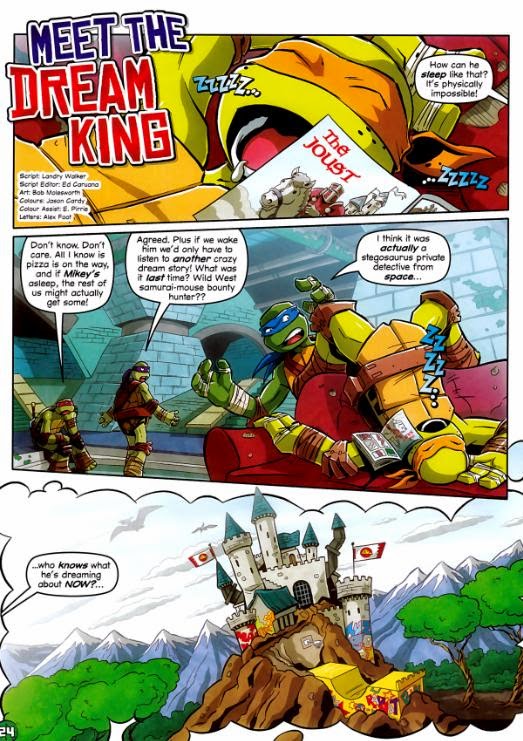 In the living room, Mikey has fallen asleep while reading an issue of The Joust.  His brothers sneak out to get a pizza, knowing that if they can keep from waking Mikey, he won’t be able to eat the whole pizza OR bore them with more stories about his stupid dreams.

As King Mikey sits atop his throne, flanked by Ye Olde Leo and Ye Olde Raph, Apprentice Wizard Donnie comes barging in with news that the Black Knight has stolen the Golden Pizza of Ultimate Power.  Master Wizard Splinter informs King Mikey that he must recover the Golden Pizza and if its power has made the Black Knight too strong, then he must make the vague yet ultimate sacrifice. 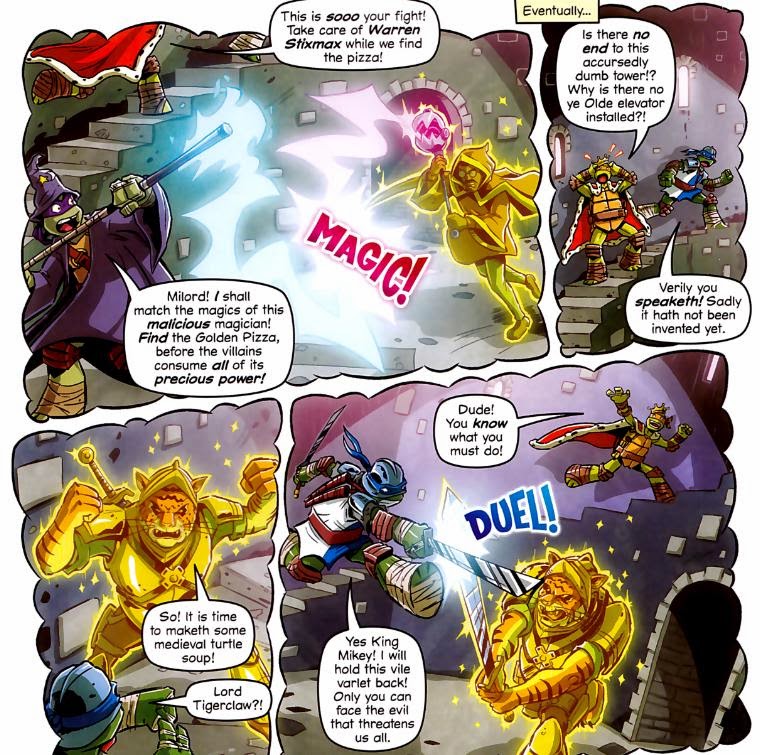 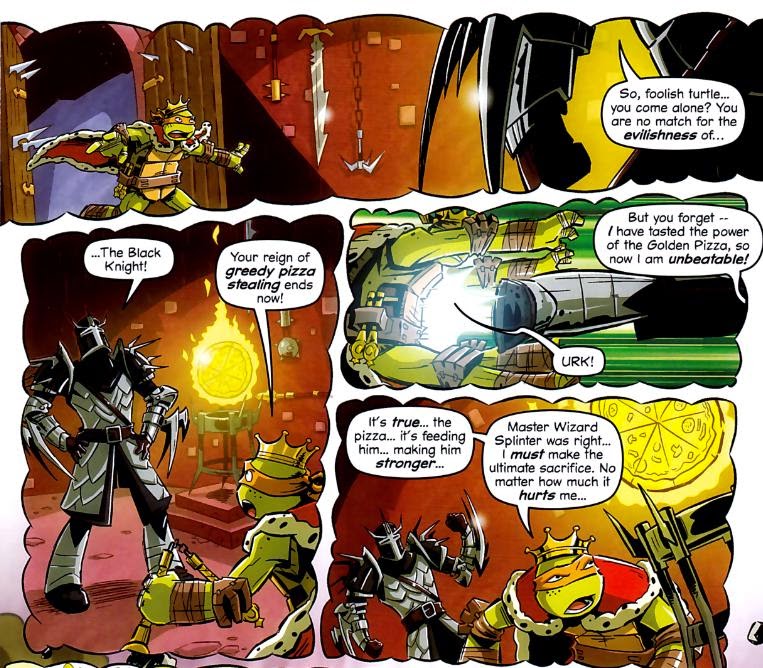 In the waking world, the Turtles try to sneak their pizza past Mikey, but the smell wakes him up.  He tackles them and scarfs down the whole pie by himself.  The Turtles sigh and decide to go out to Murakami’s instead.  Mikey asks them to bring him back some pizza gyouza.

*This story is continued from “Sleepwalking Sensei”.  The story continues in TMNT Magazine (Panini) #16.

*Donatello appears to be drawn in his LARPing Turtles design from the episode “Mazes & Mutants” (minus the beard, anyway).  The other Turtles, however, are not wearing their outfits from that episode.

*Since Tiger Claw has both eyes, I guess that means this story takes place somewhere between “Wormquake!” and “The Wrath of Tiger Claw”.  But then again, it's just a dream, so...

Where as the first story in this issue left me cold, this second story makes up for it in spades.

I sort of hope the running gag of Michelangelo having weird dreams becomes sort of an annual tradition with Panini’s TMNT Magazine.  It’s a fun little diversion that lets the writers and artists go crazy.  Even more than that, since these stories are just dreams and “don’t count”, they circumvent whatever Viacom mandate keeps the Turtles from actually encountering and doing battle with the Shredder in these Nickelodeon-based comics.  Seriously, Mikey’s one-page confrontation with the Black Knight is the closest either the IDW or Panini comics based on the cartoon have gotten to featuring the Shredder in action.

At first, I thought this was going to be another tie-in with the LARPing Turtles action figures, ala the episode “Mazes & Monsters”.  Turns out only Donnie is drawn in the garb of his LARPing variant, and even that seems like it could have been coincidental.  I mean, if the script calls for “a Gandalf-like wizard Donatello”, there’s only so much you can do.  And Donnie being in a purple cloak with a purple Gandalf hat seems like something two artists in a vacuum could come up with independently.

What’s fun about these “Mikey’s dream” stories is that they’re all written in Michelangelo’s voice, so all the characters sound like Mikey doing impressions of them.  He tries to spin nuggets of wisdom fromSplinter, techno jargon from Donatello, villainous declarations from the rogues gallery, etc.  It really peps the script up and gives you an idea of how the other characters sound to Michelangelo.

Anyway, this was a good little story and I hope they make a habit of them.

Grade: A- (as in, “And come to think of it, this is the first of either Nick cartoon comics to feature Tiger Claw”.)
Posted by TMNT Entity at 7:34 PM