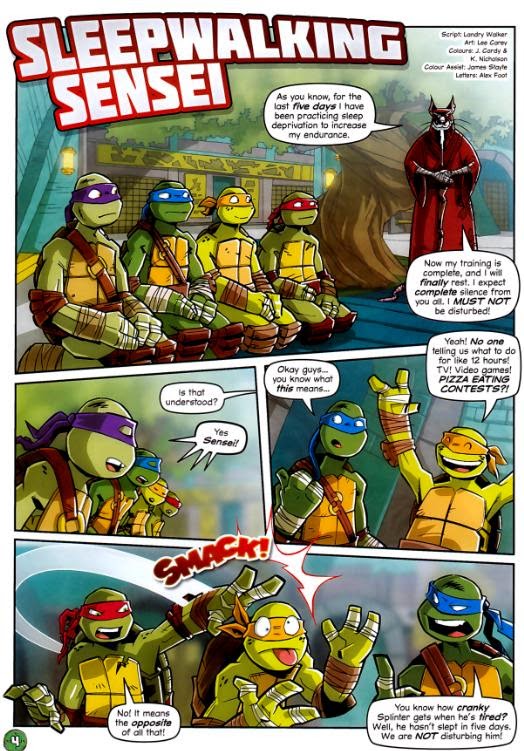 In the dojo, Master Splinter informs his sons that he has completed his five days of sleep deprivation to increase his endurance.  He tells his sons not to wake him under any circumstances, as he’s looking forward to a restful night’s sleep.

A few minutes later, the Turtles are shocked to see their sensei sleepwalking through the lair.  And then leaving the lair.  The Turtles follow him, fearful of being punished if they wake him. 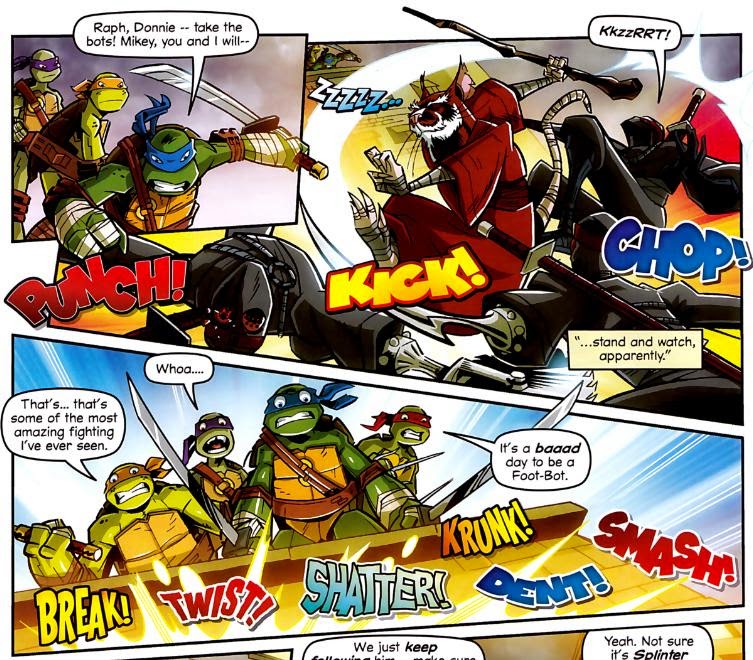 As Splinter sleepwalks across the rooftops, he is ambushed by a unit of Footbots.  The Turtles prepare to intervene, but find that Splinter can fight just as well asleep as he can awake.  For the remainder of the night, they follow Splinter around as he has further misadventures with the Kraang and Fishface.

Eventually, come the dawn, Splinter sleepwalks back to the lair and the Turtles are ready to get some sleep of their own.  As Mikey eats a potato chip, the crunch awakens Splinter who is furious at being disturbed.  He tells his sons that they will now be punished with the same five days of sleep deprivation that he endured, but all the Turtles promptly faint from exhaustion.  Splinter growls that they were probably up all night partying.

*This story is continued from TMNT Magazine (Panini) #14.  The story continues in “Meet the Dream King”.

This one was kind of a corny standby cartoon/kiddy comic plot.  I mean, wasn’t this, like, every episode of Mr. Magoo ever animated?  The whole “character unaware of their surroundings wanders into dangerous environments while other characters keep them safe without them knowing it” cliché.  There’s got to be a better trope name than that, but you know what I’m talking about.

I’m just shocked Splinter didn’t wander onto a construction site for the ultimate in hackneyed scripting.

Well, cliché as it is, it does the scenario justice and the reason for Splinter’s sleepwalking was interesting (sleep deprivation to improve endurance apparently results in fighting crime while snoozing).

Not really a fan of this one, but at least it was one of the shorter length strips.

Grade: D+ (as in, “Didn’t care much for it, no, but I DID like Carey’s drawing of Splinter skittering across the telephone lines on Page 8”.)
Posted by TMNT Entity at 7:20 PM