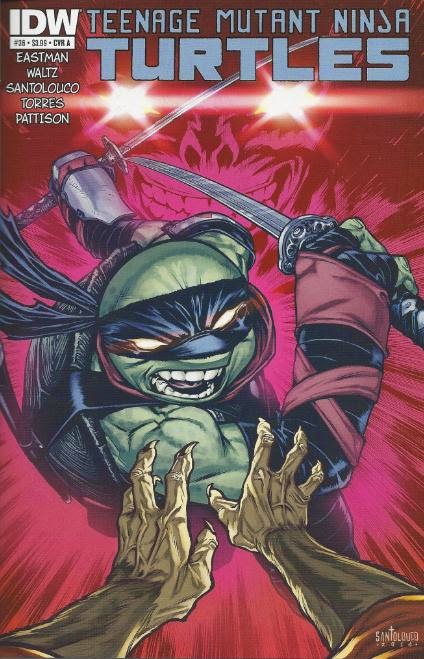 The tale of the Pied Piper of Hamelin is retold as a strange figure plays the flute in a dark place.

Down in the lair, Leonardo and Splinter can’t come to a consensus on their priorities.  Splinter wants to deal with the Foot Clan immediately, while Leo feels that General Krang presents the more pressing threat.  Having gotten nowhere, they decide to take a walk around the sewers.

On the streets, Casey is hanging around outside the Second Time Around shop when he hears two people talking about breaking in.  He confronts them and discovers that it’s April’s parents who don't have keys.  They tell him that they’re moving back into the shop’s apartment but didn't want to bug April for a spare set.  Mrs. O’Neil is horrified at the bruises Hun has left on Casey and insists he come in to rest. 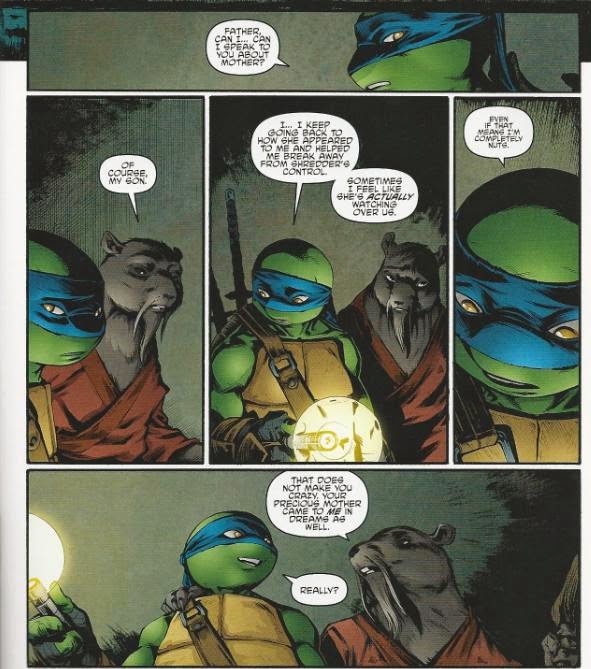 Down in the tunnels, Leo and Splinter tell one another about the visions they had of Tang Shen.  Leo is confused, as he recalls Splinter telling him that, in his days as Hamato Yoshi, he promised Shen that he would not seek vengeance upon the Foot.  Splinter laments that the promise was made in a previous life and that it was a promise to protect his sons; a promise he failed to fulfill because he DIDN’T take action against the Foot.  Suddenly, everything goes dark. 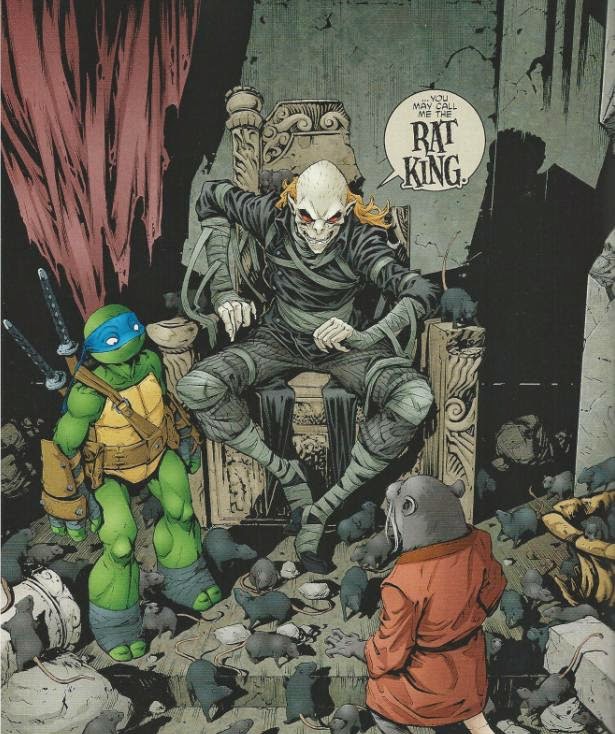 When the lights come back on, Splinter and Leo are paralyzed and trapped in a desolate throne room surrounded by rats.  On the ruined throne is a gaunt, verminous man who introduces himself as the Rat King.  He says that they’re in a mystical realm called a Thin Place and he has used his spiritual powers to paralyze them.  While he’s curious about Splinter, the Rat King is disgusted by Leo as he reeks of his "sister’s work”.  The Rat King explains that he is ages old and that his family has competed to rule all through various games.  At one point, he was even the Pied Piper of legend.  He infers that all that has occurred in their lives has been arranged by his family as if it were a game of chess. 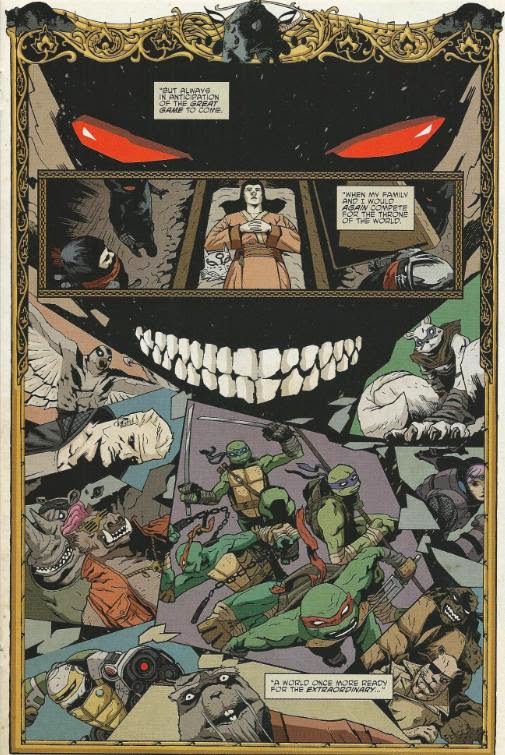 Whilst reciting the ballad of the Pied Piper, the Rat King makes his move and tests Splinter.  Splinter is confronted by Dark Leo.  Dark Leo accuses Splinter of failing him and attacks.  Splinter overcomes the psychological attack and refuses to fight back, admitting to his past failures and vowing to make up for them by taking action.  The Rat King is amused by Splinter’s devotion to his sons and decides to move on.

Leo's test sees him confronted by a monstrous version of Splinter.  The evil Splinter admonishes Leo for being a failure, but right off the bat Leo isn’t falling for it.  Recalling what the Rat King said about him reeking of his “sister’s” work, Leo realizes that the Rat King is the brother of Kitsune and that all of this is in his head.  He slices the evil Splinter in the arm before attacking the Rat King directly.  The Rat King is fascinated that Leo was able to turn Kitsune’s attack on his psyche into a spiritual strength.

Suddenly, Leo and Splinter find themselves back in the lair.  The Rat King informs them that they are highly interesting pieces in the game.  He tells them that soon it will be his turn to move and that Leo may be the piece he chooses.  He then erases their memories of the encounter and vanishes.  Leo notices that Splinter has cut his arm, but neither recall where the injury came from.  Leo suddenly has an epiphany about “turning a weakness into a strength” and announces he knows how to beat the Shredder. 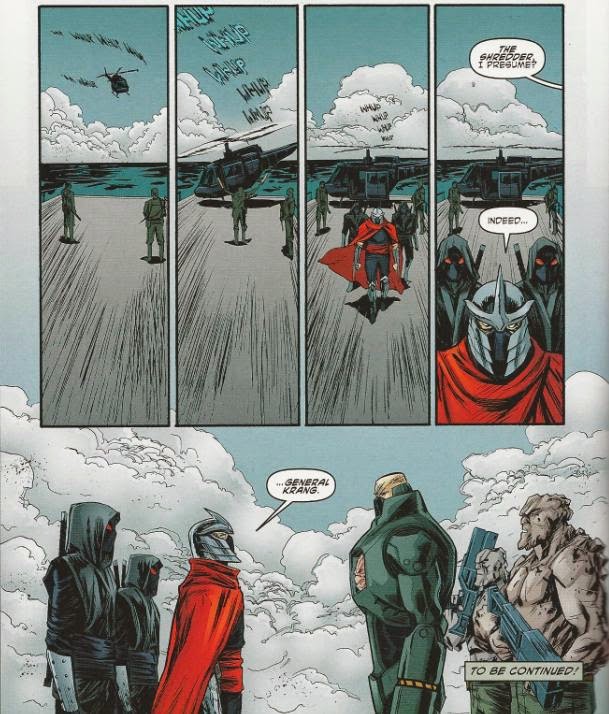 Speaking of whom, the Shredder arrives via helicopter to a meeting with General Krang…

*Tang Shen appeared to Leo and Splinter through their dreams in TMNT (IDW) #30.  Splinter, as Hamato Yoshi, made his promise to Tang Shen not to seek revenge against the Foot in TMNT (IDW) #5.

*This issue was originally published with 4 variant covers: Cover A by Santolouco, Cover B by Eastman and Pattison, Cover RI by Mark Torres, and Cover RE by Kevin Eastman, Peter Laird and Steve Lavigne.

*This issue also included character design sketches of the Rat King by Santolouco.

The Rat King.  My all-time favorite TMNT villain.  I could write a whole article about him, and I probably will, but the glorious thing about the Rat King is that no two incarnations are alike.  They aren’t just different, every Rat King is RADICALLY different with only the vaguest similarities in terms of abilities and aesthetics binding them together as the same individual.  And that’s one of the character’s greatest strengths; his malleability and potential to be reinterpreted in any number of different ways, yet always retaining some fundamental essence that reassures you he is… The Rat King.

So this time around, he’s a supernatural entity of undefined origin, the feuding brother of Kitsune making a bid for world conquest, and also the literal Pied Piper of Hamelin.  Hey, in one universe he was a half-clone/half-robot that made Six Million Dollar Man sound effects while doing the Hurricane Kick from Street Fighter.  He’s been through weirder phases is all I’m saying.

When the Rat King was teased in the final page of the previous issue, I was wondering if he was going to be tied into anything else going on in this book’s mythology.  There hadn’t been any build-up or foreshadowing for the character, at least not obviously, and characters don’t just step out of the blue in this book.  Tying him in with Kitsune, who is still a mystery wrapped in an enigma wrapped in a kimono, gives him a place within the complex tapestry of IDW’s Ninja Turtles universe while also allowing him to be a “surprise” villain.  Bebop and Rocksteady required two agonizing years of build-up while the Rat King just shows up fully formed and all “sup guys” in a single issue.  Go figure.

Like everything else, he is now inextricably tied into the aforementioned tapestry that makes the IDW universe so lush (if a little less “random” since absolutely everything is interconnected in some way).  And it makes you wonder more about Kitsune’s deal, which is something I’ll admit I haven’t given much thought, and what her sincere motivations are.  Apparently she’s out to rule the world, so is the Shredder just another pawn in her “game” with her brother?  And exactly HOW MANY of the events in this book’s timeline have been arranged as part of their “game”?  Did they have a hand in the reincarnation of Yoshi and his sons?  And how is their supernatural angle going to collide with General Krang’s sci-fi based angle?

Again, more teeeaaasssiiinnnggg.  Which is something this book has been really good at since it started.

There are some interesting reflections going on in this story, as Splinter and Leo both discuss their mutual visions of Tang Shen for the first time and Leo straight up calls Splinter out on his promise.  Splinter’s excuse starts out rather flimsy (“It doesn’t count if you get reincarnated”), but escalates into something of a bit more substance (“No, I promised to protect and look at what a good job doing jack shit did”).  What the Rat King ends up doing with his Dark Leo scenario is to fortify Splinter’s conviction that Shredder must be dealt with.  Incidentally, the Shredder is Kitsune’s pawn in the “game”, so that works out nicely for him.  Likewise, he leaves Leo with a lingering sense of inspiration that I assume will result in his trying to play Shredder and Krang against one another.  It might sound obvious in summary, but the execution was subtle and thought-provoking.

Santolouco’s interpretation of the Rat King is, like many others, a total departure and highly original.  Yet he still retains those basic Rat King-isms that make him identifiable as the character; tattered bandages and a propensity for living in squalor.  Santolouco gives the Rat King this gaunt, Count Orlok-like appearance that invokes the zombie-esque version from the Nickelodeon cartoon (while the balding skull with flowing cape of hair invokes Riffraff from “The Rocky Horror Picture Show” and intentional or not I’m a-ok with it).  Again, it speaks to how open to interpretation the Rat King is, which has always been his greatest strength.

All in all, this was a wonderful issue not just because of all the back story elaboration, plot thread dropping, or even the introduction of a classic villain.  I think it worked because save for that brief diversion with Casey, the whole issue was a singularly focused story.  Your attention isn’t pulled in twelve different directions at once (which this book can be guilty of doing from time to time) and you really get to invest in the depth of this one adventure.

Grade: A (as in “And I didn’t even comment on Krang and Shredder properly meeting for the first time.  That’s kind of a big deal”.)