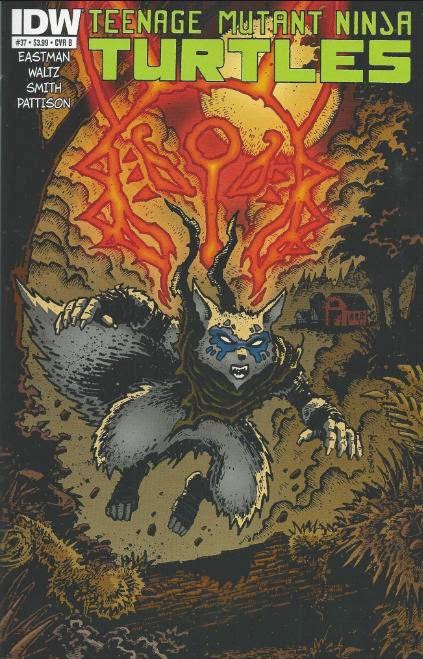 In Northampton, Alopex is stalking a rabbit when she’s approached by the spectral form of Kitsune.  Kitstune reminds her of their previous chat, where she told her a time would come when she needed to act.  Alopex thinks she already acted when she left the Foot, but Kitsune reminds her that her “piece” is still in “play”.  More importantly, when the “game” really kicks off, Kitsune will need Alopex by her side.  Kitsune wipes Alopex’s memory of their encounter and vanishes, her spirit returning to her body in New York. 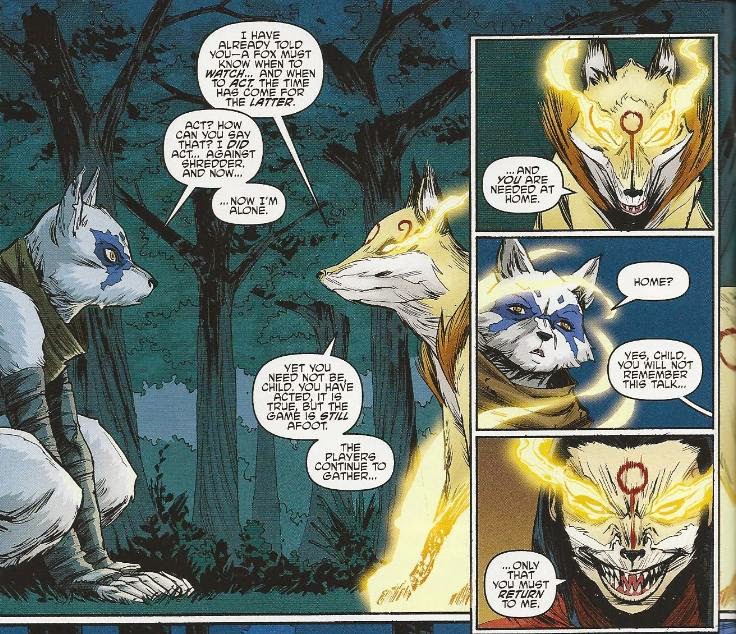 On a boat belonging to General Krang, the Shredder arrives, flanked by two Foot Soldiers.  Krang, meanwhile, is flanked by Tragg and Granitor.  Krang isn’t too thrilled to this meeting, as the last time he and Shredder had an encounter, the Shredder betrayed him and stole his ooze (back when Krang masqueraded as the Iron Demon).  Shredder suggests they put old encounters aside and proposes an alliance.  Shredder is aware of Krang’s recent developments with the ooze and has made some developments of his own in the form of mutagen.  Krang recalls all too well how Shredder GOT his ooze; it was when Karai invaded Burnow Island and stole it.  Krang tells Shredder that his so-called developments mean nothing, as he currently has people working on something very big: New Utrominon. 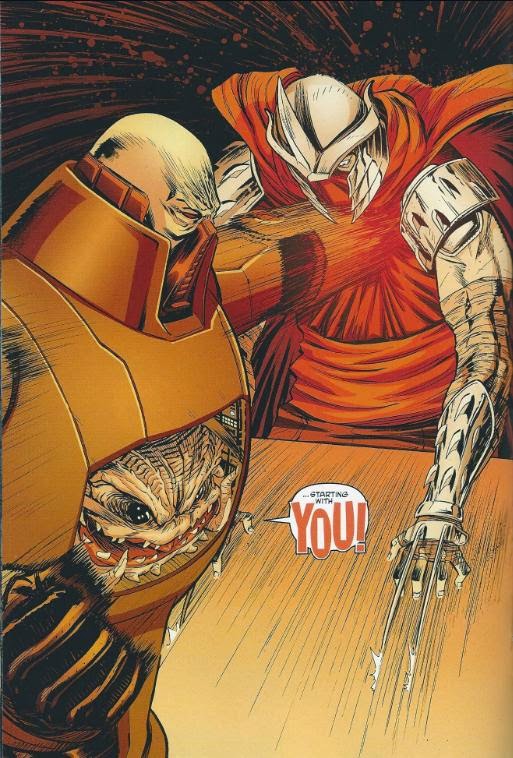 The Shredder warns him that humanity will never surrender to alien rule.  He proposes that the Foot will act as a go-between for Krang’s forces and humanity, with himself ruling over the Earthlings and protecting the revived Utroms.  Krang laughs at Shredder’s gall, saying he has no intention of sparing a single human in his conquest of Earth.  He then proceeds to punch through Shredder’s chest, killing him.

As it turns out, “Shredder” was a decoy.  The real Oroku Saki is disguised as one of the Foot Soldiers.  He sets off a bomb in the decoy’s helmet, allowing him the opportunity to slip away (while the other Foot Soldier absorbs Tragg and Granitor’s bullets).  Shredder makes it to the bow, but Krang launches a missile from his rocket-gauntlet-thing and blasts the Foot helicopter out of the sky.  Krang is ready to annihilate him when Shredder calls in his trump cards: Koya and the new hammerhead shark mutant, Bludgeon. 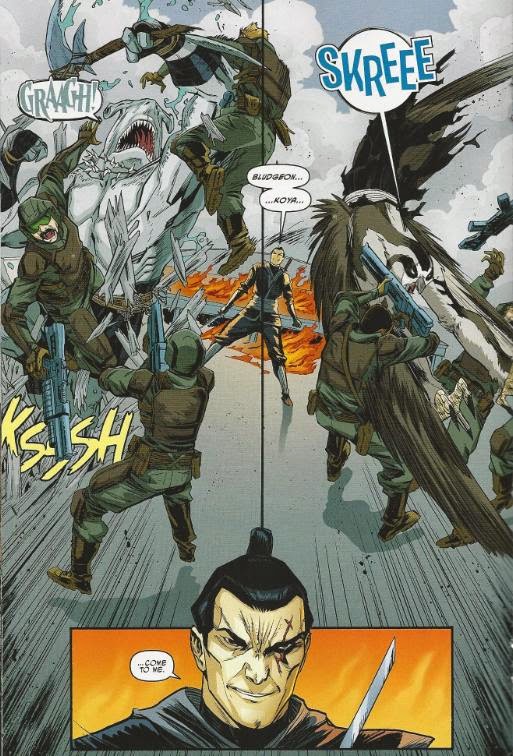 Bludgeon and Koya take on Tragg and Granitor, freeing up Shredder and Krang to duel.  Shredder damages Krang’s body with his sword, inciting Krang to launch a volley of missiles all over the place.  The explosions begin to sink the ship.  The henchmen on both sides decide to take initiative: Koya swoops in and carries Shredder away while Granitor calls Burnow Island for an immediate teleportation.  Krang is livid about losing the chance to kill Shredder, but Shredder is more passive.  He commends Bludgeon and Koya on their quick thinking.  However, he informs them that the war has just escalated.

*The events of the Turtles in Time miniseries occur concurrently with this issue.

*The Shredder double-crossed the Iron Demon (Krang) in The Secret History of the Foot Clan #4.

*Alopex and Kitsune had their first chat in TMNT (IDW) #27.

*Stockgen employee Chet/Fugitoid was revealed as a double agent working for the Foot in TMNT Micro-Series #8: Fugitoid.  Karai invaded Burnow Island and stole the ooze in TMNT (IDW) #19.  The Fugitoid agreed to work with Krang and Baxter Stockman on the Technodrome, but secretly shared his information with the Turtles and the Foot Clan, in Utrom Empire #3.

*The Shredder saw a vision of the Foot warring with Krang in TMNT Villains Micro-Series #8: Shredder.

*Shredder previously disguised himself as a Foot Soldier in TMNT Microseries #4: Leonardo.

*In the letters page of TMNT (IDW) #40, editor Bobby Curnow described the origins of Bludgeon as a character: "Tom originally wrote Bludgeon as Armaggon, but besides being a shark, there's virtually nothing in common between the two characters.  So instead of having an 'in name only' character, we decided just to make him his own entity."

*This issue was originally published with 3 variant covers: Cover A by Smith, Cover B by Eastman and Pattison, and Cover RI by Mike Henderson.

God, how many reviews for TMNT this month are going to include Street Sharks references?  Waltz brought this on himself.

Anyway, this was a great transitioning story that works as both an epilogue to the previous arc and a prologue to the next.  The brief interlude with Alopex ties into what we learned last issue with the Rat King, his family and the “game” they’re playing.  The meat of the issue, though, covers the Shredder and Krang, throwing down the gauntlet and setting up what I can only assume will be a major arc.  It also functions as a more low-key one-shot, being a fairly self-contained narrative.  In all ways, it’s a well-crafted story that functions on numerous levels (also making it an ideal jumping-on point, even if it was never advertised as such).

If the Turtle Tips section didn’t clue you in, much of the issue consists of two characters talking and recapping past events, tying several key plot points from the past three years together.  Waltz tries to work these references organically into the dialogue, with only a few Stan Lee-isms to speak of (“Ha Ha, I have every intention of killing you, but I will permit you to indulge in your long-winded exposition only because it amuses me!”).  There’s a good balance between retreading old information and setting up new situations (and introducing new characters) so it isn’t like this is a “recap issue” or whatever.

I’m rather glad we aren’t getting the Shredder/Krang alliance, too.  Their rift was already presaged in the Shredder micro, but immediately turning them against one another also deviates from what a lot of readers might have been anticipating.  Doesn’t look like there’s gonna be any ‘80s cartoon Shredder/Krang partnership in this book.  At least not anytime soon.

When you take a step back and look at the big picture, you start to see the whole series in perspective.  And in a way, I think I’m coming to better appreciate IDW’s Shredder (who I always thought was shortsighted or just kinda dumb).  Look at everything he’s done up to this point and you can see that he’s been working from an agenda, taking on tasks one step at a time.  First, he menaced Stockgen/Burnow Island to steal ooze.  Then, he scoped out Leonardo as a potential candidate for second in command.  Then, he found and revived Kitsune.  All of this was to give him an edge for the next step in his ascent to greatness: Consolidating power in New York.  He did that in “City Fall” by seizing command of the Purple Dragons and the Savate.  Now that he has all of his ducks in a row, he’s ready to take things to the next level and confront General Krang in a battle for the Earth (“Today New York City, tomorrow the world” I guess, though that’s kind of a leap in square acreage).

What you can see is that everything he’s been doing has been highly methodical.  As a reader, it’s been a bit infuriating as EVERY issue has felt like build-up to something else.  But when you really get a look at it, you can see that it’s been nothing but a checklist since Day One and Shredder just crossed off another errand.  So yes, this issue does suffer from the “build up build up build up so much build up” problem that’s made this book anxious reading since it started, but now that the big picture is just a little bit clearer, I think we can appreciate the storytelling method a little more (as infuriating as it can be).

The new character introduced in this issue is the Street Shark I mentioned at the start of my review: Bludgeon.  Doesn’t Hasbro own that trademark?  Sorry Playmates, but it’s not like they were flooding the market with IDW-based TMNT toys, anyway.  At any rate, he has a great design (the fishing nets around his shorts, the shark tooth necklace), though we’ve still got a lot to learn about his personality and origin.  He’s the first mutant henchman to spring out of the ether; even Koya got a brief introduction as Shredder’s pet falcon.  Unless I missed a hammerhead shark somewhere in this book, and if I did I’m going to go get my eyes checked.

Also, this Cory Smith guy is really good.  Santolouco is coming back next issue, though the closing editor’s comments promise that we’ll be seeing more of Smith soon.  I certainly hope so.  His style blends well with Santolouco's, especially after Pattison has put her excellent colors on things, but there are lots of little details that push things over the edge.  I love how the fake Shredder's claws scrape against the table when Krang is impaling him on that splash page.

Grade: B (as in, “Because OF COURSE I checked, look at the fake Shredder from the start of the issue.  He doesn’t have the scar on his left eye!  Now that’s good thinking on Smith’s part”.)