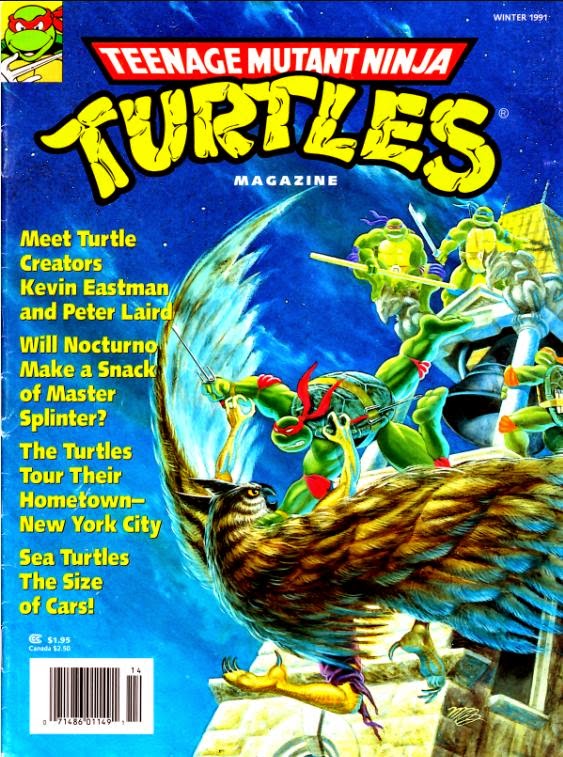 “Beat or be Eaten”

It's late night in South Bronx and the Turtles are about to have a pizza party in the middle of the street.  They’re anxiously awaiting Master Splinter, who was charged with bringing the drinks, but he’s late.  They spot some broken soda bottles in the street and hear evil laughter coming from the bell tower of a nearby church.  Leo orders Don and Mike to stay behind while he and Raph see what’s up. 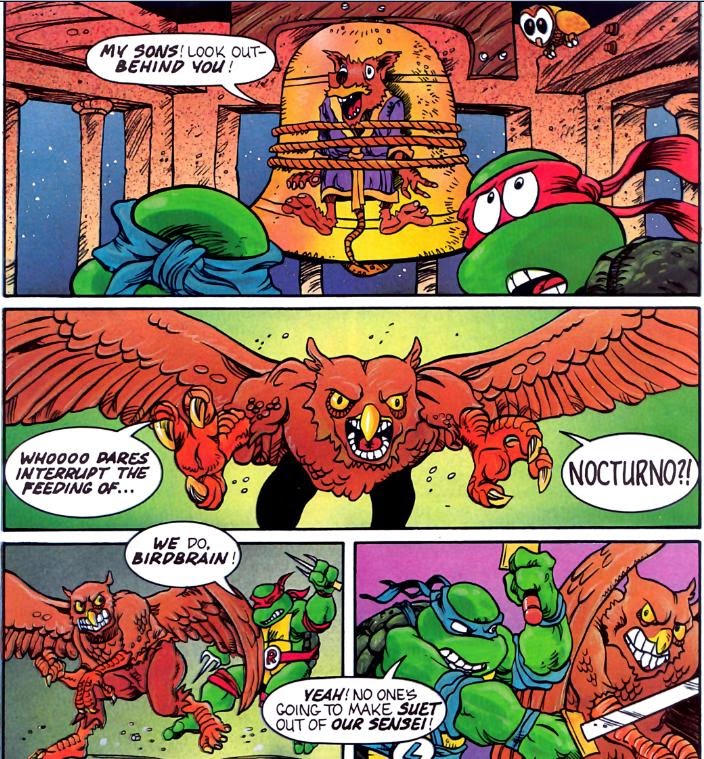 Entering the bell tower, they find Splinter tied to the church bell as a mutant owl named Nocturno prepares to gobble him up.  They demand that he unhand their sensei and Nocturno attacks.  As Leo frees Splinter, Raph tackles Nocturno off the balcony and sends him plummeting down to the street. 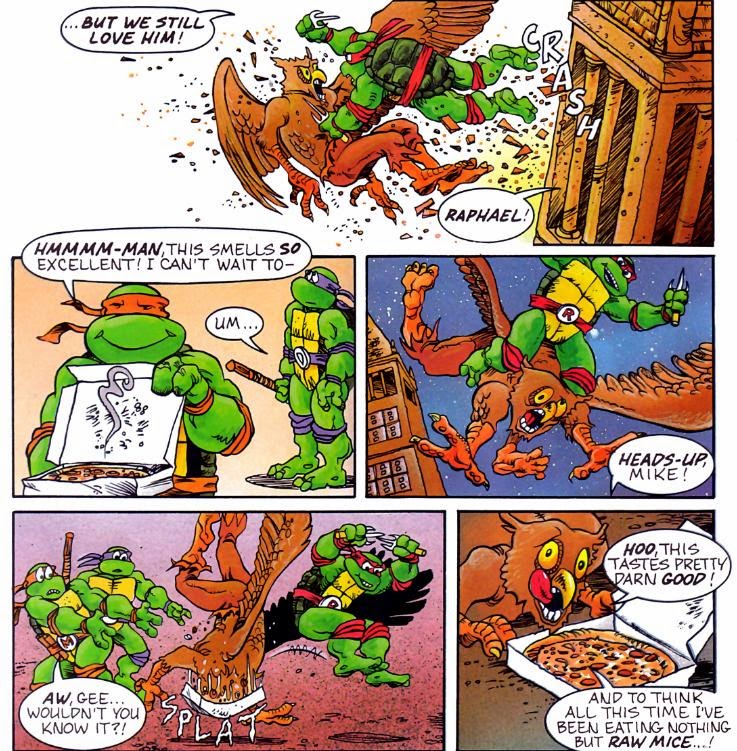 Nocturno lands face-first in Michelangelo’s pizza and remarks that this dish is much tastier than rodents.  Splinter reunites with his students and proclaims that they’ve turned an enemy into a friend.  As Michelangelo watches Nocturno devour his pizza, he isn’t so sure he wants to be friends.

*This marks the first appearance of Nocturno, who would later appear in TMNT Adventures #27 as a member of the Uncanny Trio.

Hey, one of the Uncanny Trio actually got a spotlight story!  Didn't see that coming.

We don’t really learn much about Nocturno (this isn’t exactly the most revealing villain focus), though I guess the knowledge that he wants to eat Splinter is a little unsettling.  The Uncanny Trio were almost never used in TMNT Adventures (one of their two appearances actually went unpublished), so I guess we have to take what we can get.  The team always worked in unison and sort of had a Huey, Dewie and Louie hive mind thing going on; the characters weren’t distinct beyond their species.

Like the Warrior Dragon story from last issue, "Beat or be Eaten" feels like a test run or teaser for the full issue featuring Nocturno published in TMNT Adventures.  At the very least, the setup for the conclusion is similar (the Turtles hunting down a kidnapped friend to a church's steeple/bell tower, battling Nocturno and sending him plummeting over a balcony).

Perhaps alarming is that the Turtles and Master Splinter (!) have planned a midnight pizza party in the streets of South Bronx for no reason whatsoever.  Are they concerned in the slightest about being seen by humans?  I guess the Turtles are the only New Yorkers brave enough to set foot outside in the Bronx after sundown.

Anyhow, like Warrior Dragon who came before him, Nocturno had his genesis in TMNT Magazine, making this another somewhat “neat” issue if you’re into that sort of minutia.  So even the superficially forgettable gag strips in this mag have their place in Ninja Turtle history, it seems.