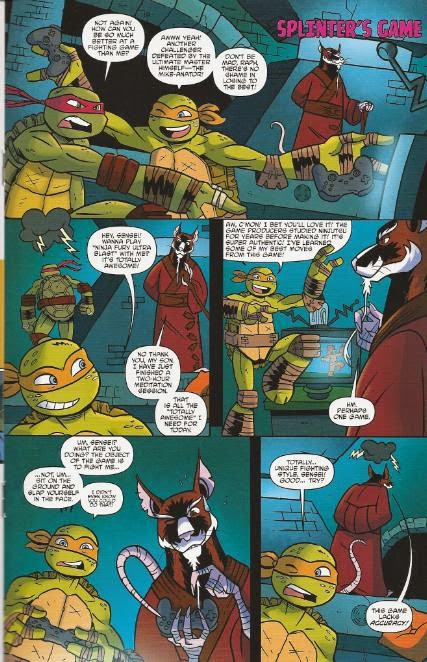 In the living room, Mikey trounces Raph in a game of Ninja Ultra Fury on their Legal-Approximation-Of-A-Playstation.  Mikey asks Master Splinter if he’d like to try and Splinter agrees.  Having never played a video game before, he completely fails at it and loses instantly. 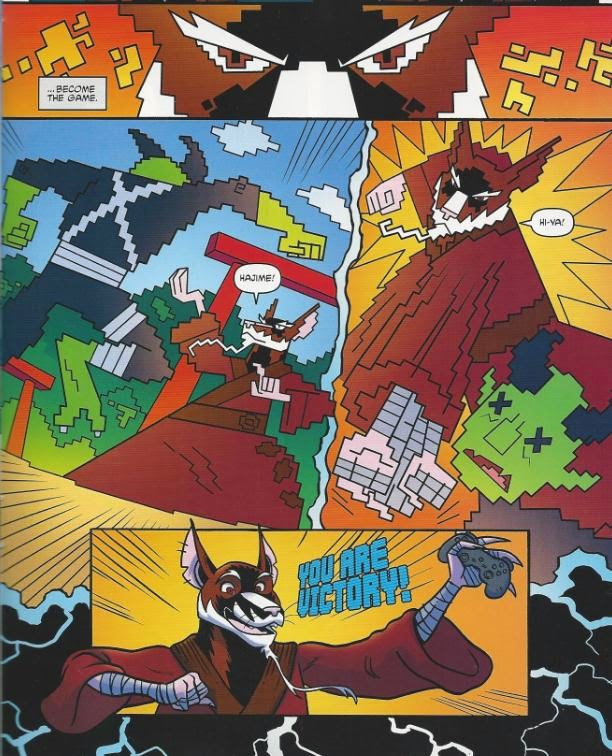 That night, while the Turtles sleep, Splinter returns to the game with ultimate focus.  For several more nights, he trains, and in doing so, he “becomes the game”.

At breakfast, Splinter asks Mikey if he’d like to partake in a rematch of Ninja Ultra Fury… on max difficulty.  Mikey declines, saying he’s bored with the game and has moved on to a new title.  Splinter momentarily freaks out in frustration, at least until he notices Leo and Don watching him.  Then he tells them to forget what they’ve seen.

*This story is continued from “The Adventures of Ice Cream Kitty”.  The story continues in TMNT New Animated Adventures #16.

TMNT editor Bobby Curnow has been credited on “story” for much of IDW’s ongoing TMNT series, but I think this is his very first Turtle script.  It’s a fun little 4 pager, in a way reminiscent of the old Fred Wolf TMNT episode “Leonardo vs. Tempestra”.  In that one, the no-nonsense train-a-holic Leonardo gets obsessed with mastering a video game.  Here, much the same happens with Master Splinter.

Beyond that, it’s sort of a one-punchline kind of comic, though the Engrish phrases were kind cute.

Grade: B (as in, “But I guess I kind of prefer these short gag strips over the ‘what I learned today’ centerpiece stories”.)