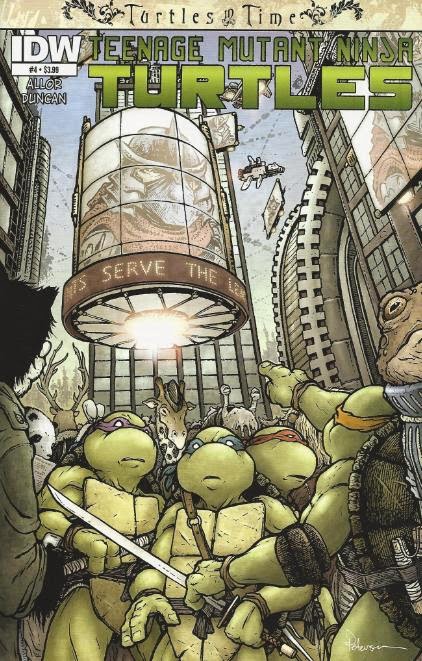 The Turtles blip into a futuristic Manhattan populated entirely by mutants.  Intrigued, they decide to get some sushi and reflect on how swell this world is.  A fish-girl at the restaurant fawns over them, explaining how she always wanted to be a ninja but her master wouldn’t let her.  Donatello tells her that she needs a new master and should follow her own path, but his words arouse the suspicions of a nearby gang.  Apparently, that sort of talk is considered treason on “Shredder Island” and a fight breaks out.  The Turtles flee (running past several humans being rounded up by Foot Clan officers) and make their way to the nearest manhole.  Unbeknownst to them, Renet arrives seconds late, but soon enough to trip the thugs that are chasing them. 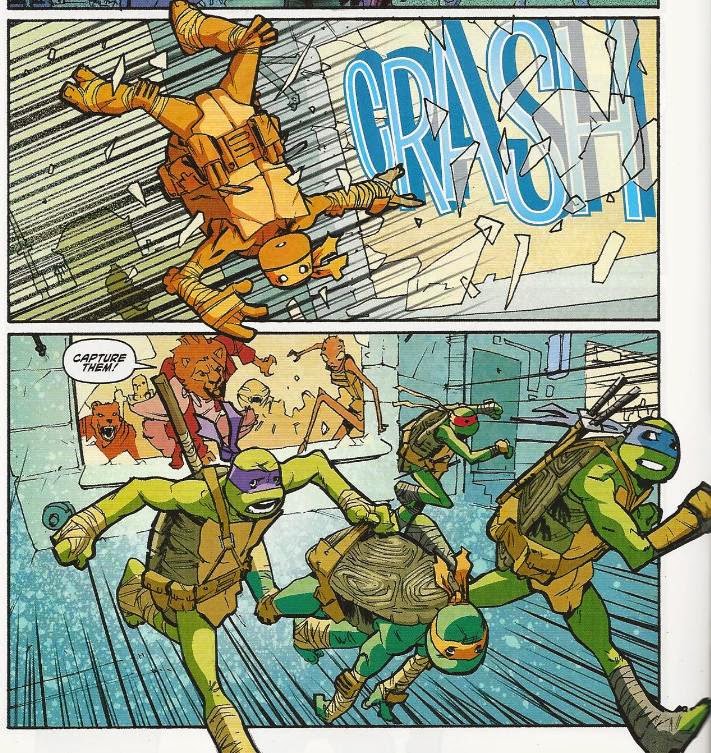 The Turtles find sanctuary in their old lair, but also find a map with grim tidings.  Apparently, in this future, Shredder controls North and South America, General Krang controls Asia, Europe and Africa, and Baxter Stockman controls Australia.  Then, Renet blips into the lair, having fixed her time scepter.  She explains that after their first adventure, the Turtles absorbed an excess of quantum particles, which is why they were suddenly sent hurtling across time and space.  Raphael wants to know why they went to time periods very specific to their history and Renet suggests that the “universe” was guiding them in an attempt to teach them a lesson. 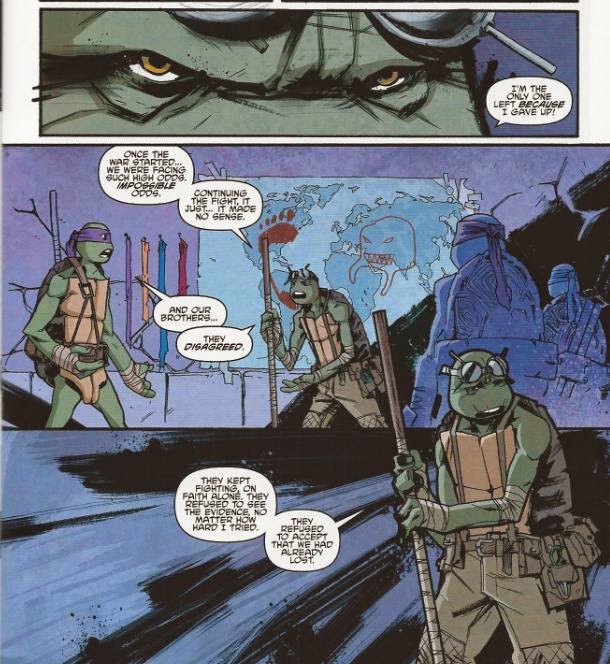 In a public square, a walrus-mutant is about to kill the humans they rounded up earlier when the Turtles storm the platform.  Future-Don joins the fray, feeling the fight return to him.  Don attempts to free one of the soldiers, but the man is executed.  He gets the rest free (including one with a scarred face), but the walrus-mutant intervenes before they can escape.  He’s summarily shot by the fish-girl from the sushi restaurant who says that Donatello inspired her earlier to fight back and follow her own path.  She joins them in escaping, following Future-Don back the lair while the Turtles keep the Foot clan at bay.  They’re then menaced by an older, more demonic-looking Shredder flanked by dozens of Bebop and Rocksteady clones.  He attempts to strike, but Renet sends them home before his blade can connect. 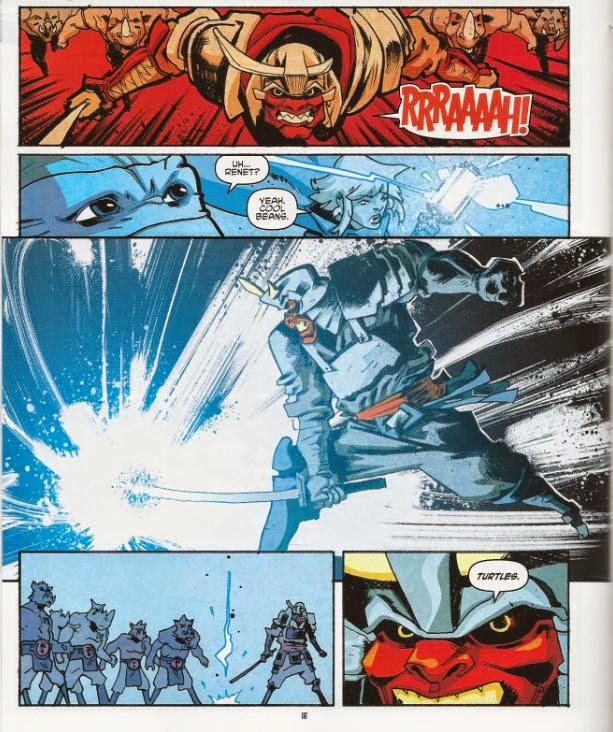 In the lair, the scar-faced man, actually Woody and leader of the resistance, asks Future-Don to consider returning to the fight to inspire and lead the people.  Future-Don holds his old purple bandana and considers it.

In the present, the Turtles reflect on the future they’ve seen.  Donatello is racked with guilt, especially because he has, in fact, considered giving up the fight many times.  Leonardo repeats what Renet said, that the “universe” was trying to teach them something.  Don is confused and unsure what to do.  Michelangelo tells him that all they CAN do is keep fighting.  Don is satisfied with that.

*This story is continued from TMNT: Turtles in Time #3.

*The future in which Shredder and Krang wage war upon one another was first glimpsed in TMNT Villains Micro Series #8: Shredder.  The older, more demonic version of the Shredder was also seen inhabiting the afterlife in that issue, as well.

*This issue was originally published with 2 variant covers: Regular Cover by David Peterson, and Subscription Cover by Dan Duncan.

Alright, before I get ahead of myself by talking about Turtles in Time as a whole, let’s discuss this single issue.  It’s rather… formulaic.  I mean, it’s really formulaic.  Every cliché of the “characters go to a future ruled by the bad guy and inspire the masses to fight back” plot is present as a matter of obligation and it’s all rather graceless.  I mean, the script follows the guidelines right down to having the character the heroes briefly talk to at the beginning show up to save the day at the end because they “inspired” her.

I’m sure if I spent 5 minutes on TV Tropes I could come up with a dozen more doppelgangers of this story right down to the letter, but do I really need to?  In the end, the dull familiarity made for a very boring, predictable read.  For all my grievances with the last issue, it was at least a fun (if rushed) tale of rascally hijinks that felt spontaneous and original.  This was writing by formula and for a tale all about “inspiring” others, this was an utterly uninspired script.

On the other hand, it does fit into the massive tapestry of IDW’s TMNT universe, following up on the glimpse of a dystopian future we saw in the Shredder micro, as well as the Shredder’s older form.  It also reads well after the one-shot story in TMNT (IDW) #37, where Shredder and Krang officially declare war on one another.  The release of these two issues was well-timed, as they complement each other nicely.  So while the story is nothing fresh, it has its place in the grand scheme of this narrative.

Now, for those patiently waiting for a flashback or a circular storytelling gimmick or SOMETHING to explain the in medias res beginning of this miniseries… too bad.  In fact, if you were reading this issue on auto-pilot and not really digesting the dialogue, you may have even missed the explanation.  Offhandedly, Renet mutters some mumbo jumbo about “quantum particles” and that’s all we get.  I guess it didn’t really need anything more than that.

Looking at the whole Turtles in Time miniseries, I think it was a lot of fun, even if it ended on a bland note.  The tonal pacing was rather bipolar (fun-serious-fun-serious), and the time period one-shot nature of each chapter sometimes forced storytelling truncations, but the end ultimately justified the means.  We got a lot of crazy situations out of this fly-by-the-seat-of-your-pants storyline and it sewed up a handful of loose threads that might have been dangling from the ends of the aforementioned IDW TMNT tapestry.  Each issue also served, sort of, as a spotlight on each Turtle and nobody felt shortchanged.  While I didn’t care for this chapter much, the whole miniseries was pretty cool.  Confusing, thanks to all the delays and scheduling bullshit, but pretty cool.