Frontispiece: On a rooftop, a battered Raphael catches his breath after trashing a unit of Foot Soldiers.  As much as he enjoys a good scrap, he wishes he could just go out once in a while without having to fight Foot ninja or whatever.  He can’t imagine what it would be like if he had to do this for the rest of his life… 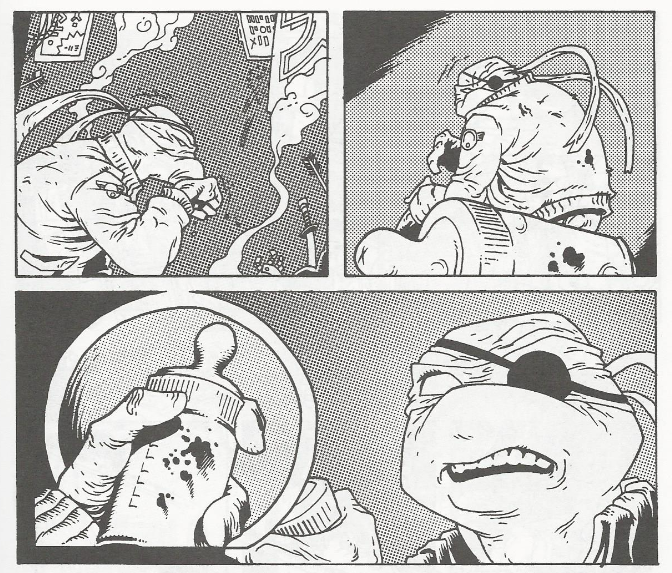 Tokyo, Christmas Day, 2060.  An aged Raphael (in an eye patch) awakens in an alley after a long battle with cyborg Foot Soldiers.  He sees a blood-stained baby’s bottle and becomes concerned.  Raph follows the trial the Foot left down into the sewers and discovers a baby girl in a basket.  He takes her into his protection, but decides he needs to find someone more suitable to change her diaper. 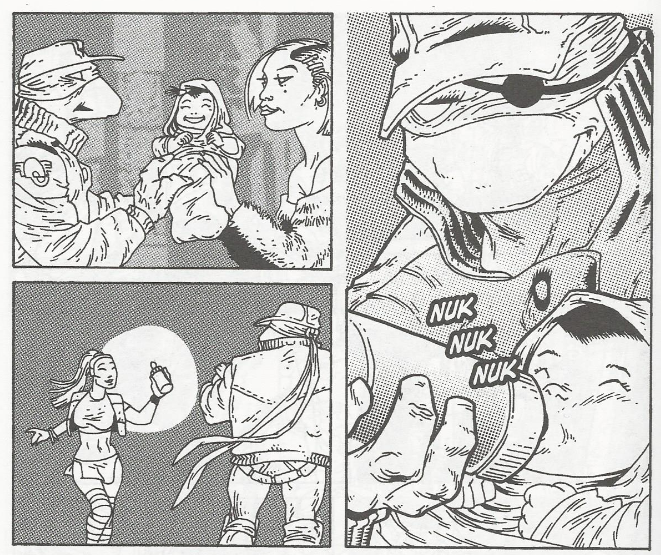 Raph goes back to the surface streets and asks around until some street punks point him toward a trio of prostitutes.  The prostitutes change the baby’s diaper and refill her bottle (though Raph takes it upon himself to feed her).  They then point him toward Tokyo General Hospital, where he can drop off the baby for safekeeping. 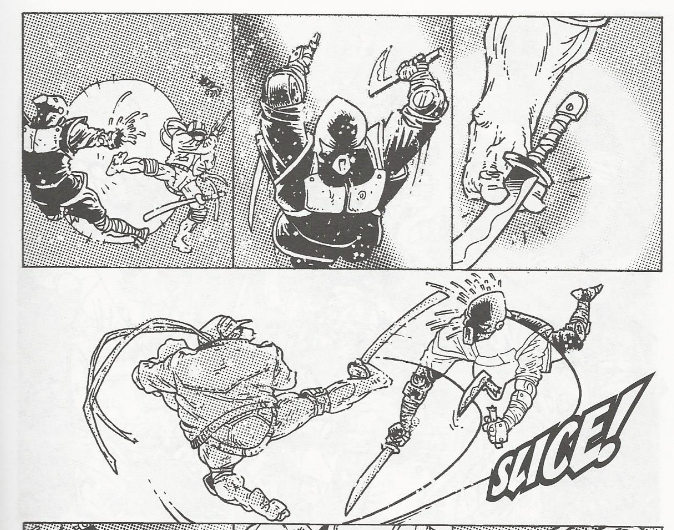 Before he can get there, he’s attacked by several radioactive zombies, but they’re only a distraction set up by more cyborg Foot Soldiers.  Handicapped by having to protect the baby with one arm, Raphael is eventually worn down by their numbers (though he puts up a good fight).  Raphael wakes up sometime later and finds the baby missing.  The street thugs and prostitutes, having witnessed the whole thing, rush to his aid and offer to help him save the baby.  Using their connections, they arm themselves with guns and find a passage into Foot HQ via the sewers. 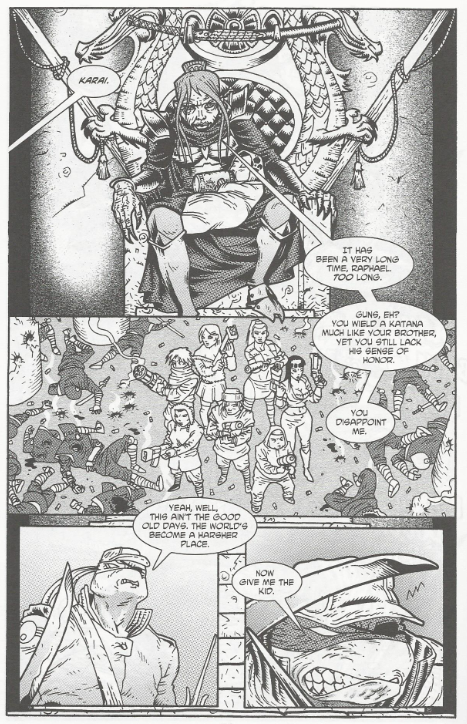 Together, Raph and his gang storm the compound, mowing down cyborg Foot Soldiers until they reach the throne room.  And sitting on the throne, cradling the baby in her arms, is a geriatric Karai.  Raph demands that she fork over the kid, but Karai says that the baby is Motoko… her great-granddaughter.  Confused and furious, Raph points to all the dead bodies surrounding them and demands an explanation as to why Karai would set up such a bloody ruse.  Karai says that she just missed “those good old days”.  Disgusted, Raph storms out.

*This story takes place in the future, sometime after the main story in Tales of the TMNT (Vol. 2) #69, but before the short “Choices”.

*In Tales of the TMNT (Vol. 2) #69, Cha Ocho was shown to be the leader of the remnants of the Foot Clan.  It’s possible that Karai either reasserted leadership after that story or that the Foot Clan has splintered into factions led by Karai and Ocho.

*The title “Silent Night” does not appear anywhere in this issue.  The title is taken from the official Mirage website.

*This issue also came with a bonus pin-up, “Raphael” by Dan Berger.

“Silent Night” takes its cues from an influential G.I. Joe story by Larry Hama, “Silent Interlude”.  There’s a good chance you’ve heard of that one, as it’s typically pointed to as an educational tool for folks either learning to create or just read stories in the sequential art medium.  Done entirely in pantomime, it requires lots and LOTS of visual context to impart narrative clues upon the reader, allowing them to interpret all the necessary exposition to comprehend the complex narrative… without ever having read a single word.

So yeah, “Silent Night” is very much a love letter to “Silent Interlude”, from the title down to the basic conflict (a rescue mission).  Jourdan does a great job of getting the story across to the reader through nothing other than the visuals, much of it being through subtle layouts that direct the reader’s eyes carefully from panel to panel so you seamlessly follow along with the flow.  Page 5, a fairly mundane page of Raph traipsing through the sewers, is actually a great example of this effect.  Observe how panel 3 is a bust of Raph looking to the left, panel 4 is a borderless panel that materializes out of panel 3, showing the empty sewer tunnel Raph is looking at, allowing the reader to “see” the visuals through Raph’s eyes. Panel 5 is then slightly overlaid upon panel 4 and it shows Raph running down that same tunnel.

As readers, we often rely on lettering to help us along with the layout of a page, and bad lettering can lead to confusion as to what panel you should be reading next, fucking up the flow.  Without that aid, Jourdan has to guide the reader along with nothing but line of sight suggestions and he manages it very well.  I think the only time I had trouble reading the art was during the huge 7 page brawl with the cyborg Foot Soldiers.  There are a LOT of panels (upwards of 12 per page) and it can get really chaotic.  I’ll concede, though, that with this being a fight scene the sense of chaos was probably intentional.

Where “Silent Night” falters, unfortunately, is when it finally starts talking at the very end.  Steve Murphy, who wrote the script, is left to come up with a reason for all this madness and the one he concocts makes no sense in the grand scheme of things.

So Karai wants a rush of nostalgia from “the good old days” by having the Turtles fight the Foot Clan.  But WHAT “good old days”?  From the very beginning, Karai was never a major antagonist of the Turtles.  They teamed up upon their first encounter and following that, they brokered a truce.  A truce Karai HONORED for years afterward, even when it hindered her own plans.  These “good old days” where she was locking horns with the Turtles... simply never existed.

And I’m wondering what made Murphy put that in there.  Is Karai senile?  Or maybe she’s pining for the “good old days” of the Foot Clan as a whole, not herself, when THEY were at odds with the Turtles?  Or maybe, in some post Volume 4 story yet to be told, Karai overturned the truce and became an enemy of the Turtles and THOSE are the good old days she’s talking about?  Good old days we, as readers, have never seen because those stories don’t exist?

Or maybe Murphy just got confused with other depictions of Karai as an enemy of the Turtles, like in the 4Kids cartoon or the Imagi TMNT film that came out the same year as this comic?  Or maybe he just wrote himself into a corner and took the easy way out by making up insubstantial bullshit?  I don’t know, but it’s the only major blemish on an otherwise excellent issue.

Grade: B+ (as in, “But a badass teaming up with a prostitute to protect a baby from an army of disposable bad guys reminds me of that flick ‘Shoot Em Up’… which also came out in 2007”.)