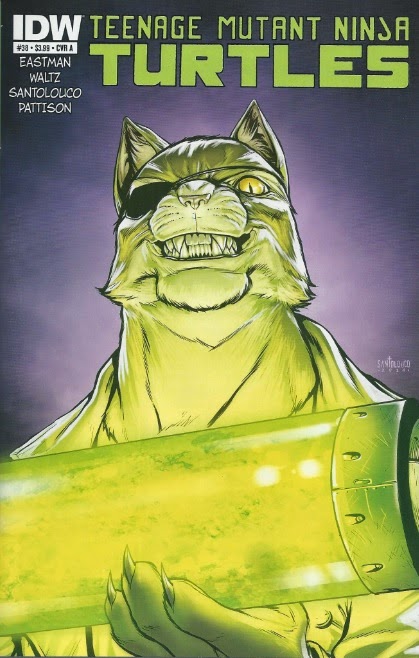 The Turtles and Splinter return to the church lair from a training run together (and Mikey is happy Splinter didn’t wear that weird mask this time).  They come home to find Slash waiting for them.  Apparently, he infiltrated through the waterways and used the various skills Hob taught him to disable the alarms.  He wants to deliver an invitation from Hob to meet with him and discuss their alliance, as per Hob’s agreement with Splinter.  As Slash leaves, he bids Mikey farewell and says he’s proud to be one of the good guys. 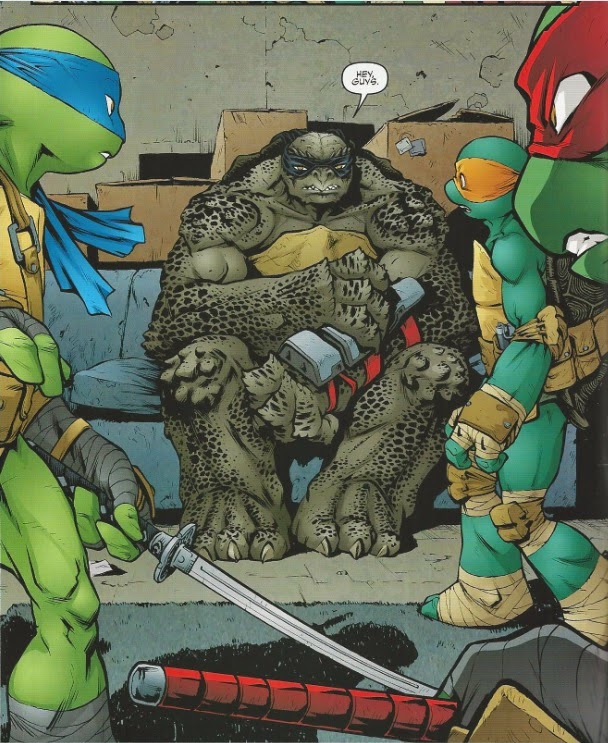 His appearance causes the family to begin arguing, as once again they debate whether they should deal with Shredder or the Technodrome first.  Donnie is furious, as he feels that the Technodrome presents a global threat and that Splinter only wants to go after the Shredder for petty personal reasons.  He storms out of the lair once it becomes clear that all the other Turtles side with Splinter and even state that an alliance with Hob’s mutant army might prove beneficial.  All agree with Splinter except Mikey, who feels that even if they aren’t “crime fighters” they’re still “good guys” and they need to be doing more to help the world.  Leo says that they’ll try to find a middle ground.  He leaves to go talk to Donnie, but tells the others to go meet with Hob and at least hear him out.

In an alley somewhere, Nobody (Angel) is taking the exo-suit for a field test while Harold remotely collects data.  Nobody trashes a group of thugs, but one gets the drop on her with a gun.  A white blur then whizzes by, knocking his shot off target and giving Nobody the chance to knock him senseless.  Nobody returns to Harold’s lab, unsure what the blur was.  From a rooftop, Alopex watches her leave. 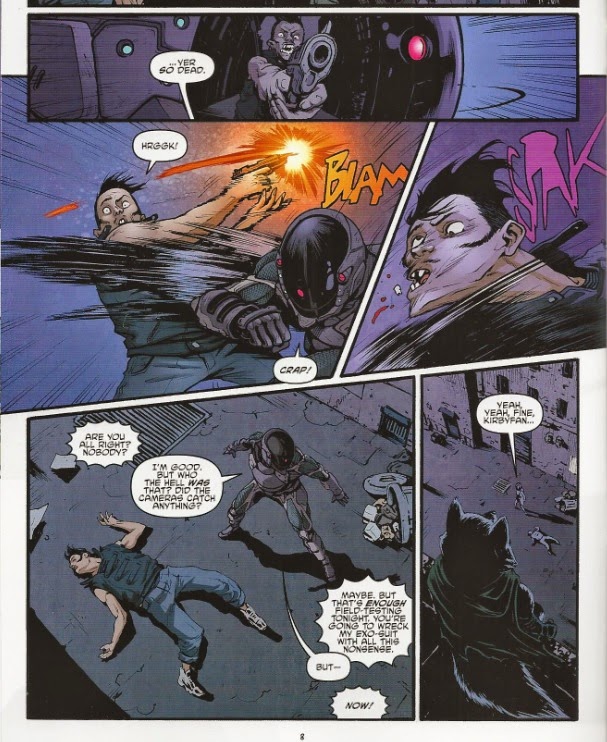 At the Second Time Around Shop, April comes home to her parents and Casey.  She sees how beat up Casey is and angrily reminds him that she has no more regenerative ooze; if he gets another serious injury in battle, she won’t be able to revive him.  She once again implores Casey to continue with his education, but Casey insists that all he knows his fighting.  The O’Neils crowd around him and remind him that what he needs to fight for is his future and that they’ll all be with him along the way. 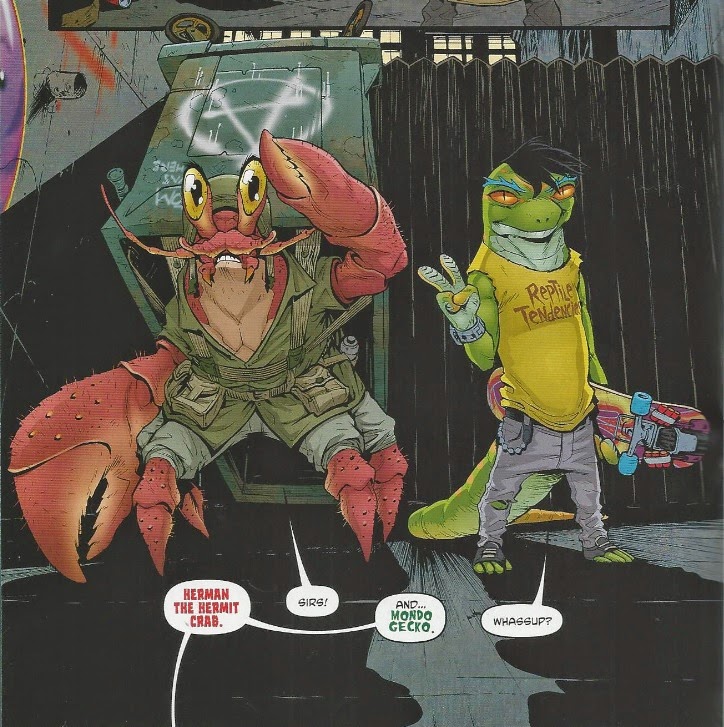 Elsewhere, Splinter and the Turtles meet up with Hob, Slash and Lindsey.  Hob says that Lindsey has perfected the mutation process and that with her help, animals will become the dominant species on Earth once more (well, mutant animals, anyway).  He then introduces his newest recruits: Herman the Hermit Crab (who wears a dumpster on his back with hidden machineguns in it) and Mondo Gecko (who has a skateboard with guns hidden in it, too).  Leo then shows up late and the two new mutants prepare to attack him, but Hob calls them off.  Raph asks Lindsey what happened to Pigeon Pete.  She says that she sent the imbecile to collect more specimens.

And Pete is doing exactly that, as he finds a pair of mysterious individuals and asks them to join Hob’s army.  The two figure it’s worth a shot and sign up.  They are, of course, Bebop and Rocksteady.

*Splinter wore a creepy mask and “trained” with the Turtles in TMNT (IDW) #21.

*Slash became familiar with the waterways leading to the lair in TMNT (IDW) #16.

*Splinter made his bargain with Old Hob in TMNT (IDW) #25.

*This issue was originally published with 4 variant covers: Cover A by Santolouco, Cover B by Eastman and Pattison, Cover RI by Brahm Revel, and Cover RI Alamo City Comic Con Exclusive by Eastman.

There’s a lot of debating and alliance-forming going on in this book, as all the characters seem to be choosing sides (even when they don’t know it).  You’ve got the Turtles “playing” for the Rat King and the Foot “playing” for Kitsune, the Turtles joining up with Hob and his mutant army, Shredder and Krang drawing lines in the sand, Stockman reevaluating his endgame, the Fugitoid playing double-agent while working for Krang, Bebop and Rocksteady joining Hob’s army (perhaps to infiltrate for the Foot?), and Alopex waiting in the wings (but being manipulated by Kitsune).

This shit needs a flow chart.

There are so many intersecting allegiances, it’s tough to keep track, but it certainly makes the book interesting.  You won’t find clear cut sides, “good guys” and “bad guys”, in this book as everyone seems to be playing for at least three teams.  I’m enjoying the complexity, and characters who were dull as dishwater when this book began are growing into something more.  We all know that there’s a major narrative milestone (if not necessarily an “end game”) waiting for us at #50 and the momentum is steadily getting us there.

If there’s a drawback to all these intersecting plot lines, I suppose it’s that now that EVERYONE is important, there simply isn’t enough space for these characters to each get their fair share of face time.  I want to know more about Koya and Bludgeon, but I’m only just NOW beginning to get a feel for smart-Slash.  Bebop and Rocksteady, likewise, are only just NOW getting into the book in a meaningful way, having only served as henchmen during “City Fall” and little more.  In a way, we’re kind of spoiled for choice as readers.  So many cool characters, we want to see more of them ALL, but there just ain’t enough pages in a month.  It’s like trying to pour ten gallons of Red Bull into a one gallon jug.

And we’re only getting MORE characters, too!  This issue introduced the new guy, Herman the Hermit Crab, and reintroduced an old favorite, Mondo Gecko.  I’ve got to say, Herman was a pretty awesome new face.  His aesthetic, the dumpster shell with the hidden machinegun, sincerely feels like it stepped out of the 1980s Playmates toyline.  This guy would fit in right alongside the likes of Halfcourt and Monty Moose.  Which is probably why he came coupled with Mondo Gecko, an actual character from the 1980s Playmates toyline.

We don’t really learn much about either character beyond the broad strokes of their personalities (Herman talks like a subservient soldier while Mondo, of course, uses the lingo of a skater dude).  So far, Hob’s army has been a neat mix of characters from the Fred Wolf era (Slash, Mondo), the Nickelodeon era (Pigeon Pete) and completely new guys (Herman).  There’s real variety in the ranks and it’s great to see representation from all the major brand incarnations (well, except for the 4Kids era, but that series was never big on mutants).

To get back on the subject of the inundation of plot lines, you can kind of see the trouble with the pacing in this issue.  Waltz has to pull in too many directions, so moments like Nobody getting saved by Alopex exist just to keep tabs on those characters and their threads, not so much because they segue in and out of the main plot very well.  Likewise, April and Casey have their moment to keep us up to date on their happenings, but it’s also a reminder of how fucking pathetic Casey has been in this book for a while.  Casey hasn’t come out on top in a fight since, what, the 2012 Annual?  The exchange was basically April trying to tell him that he needs to retire from being a badass because he’s been really, really sucking at it lately.

Anyhow, spastic pacing aside, this remains an intriguing book that mixes the nostalgic familiar with the exciting original.  Santolouco’s back and he hits another home run, but that guy always brings his A game so I’m getting bored praising him every month.  Maybe, at the end of the day, these arcs read better in trade than individually, but that’s the worst I can say about the book.

Grade: B (as in, “By the way, is Herman supposed to have a British accent?  The way his mandibles look like a handlebar mustache makes me think he should”.)