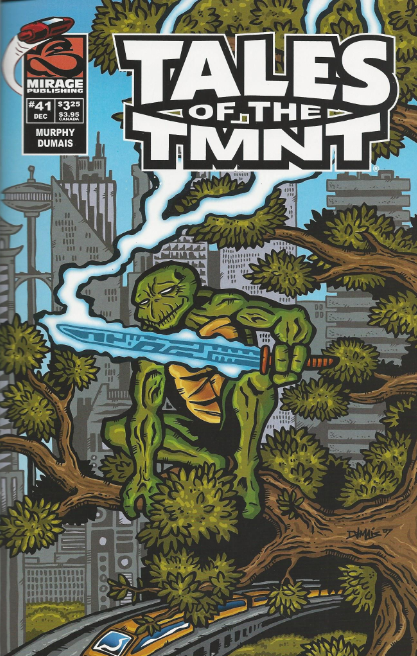 Frontispiece: As Leonardo unsheathes his sword, he states that there are few things in the universe that can surprise or impress him.  However, given all he’s been through during his life, he often reflects on what has been and what is yet to be…

2099.  Leonardo descends from the temple in Mt. Fuji where he’d meditated for the past seven years, finally feeling that he’s ready to reenter civilization.  The elderly Turtle travels across the world, revisiting places that are of great sentimental value to him.  At last, he arrives at the end of his journey: San Francisco. 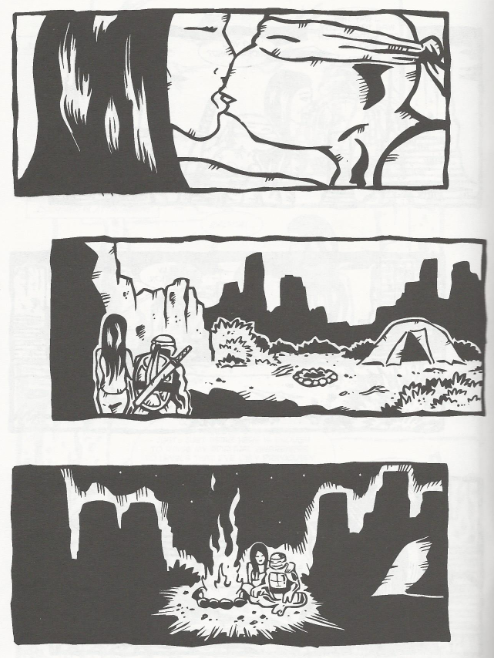 Many years ago.  Leo feels like he’s reached a block on his studies in spirituality and so he reunites with Radical.  She takes him to the southwest and teaches him a greater sense of spiritual enrichment through the natural world.  Leo realizes he never could have made it to this point without her help and the two fall in love.  They spend many years together, retreating away from the unnatural world of civilization.

After some time, they decide to return to civilization and go to New York to visit the other Turtles.  Radical lays her feet on asphalt for the first time in years and suddenly senses something wrong.  Before she can react, Complete Carnage rises from a brick wall, grabs her and breaks her neck.  He then vanishes before Leo can do anything.  The Turtles bury her in her homeland in Massachusetts and Leo embarks upon a mission of revenge, determined to kill Complete Carnage. 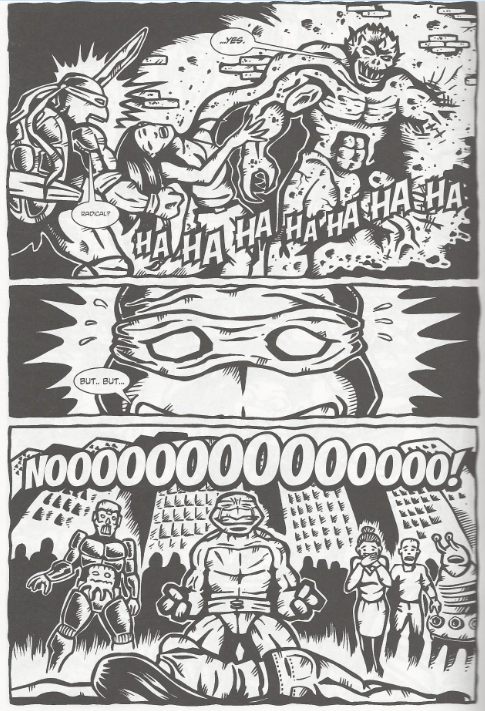 Several more years pass and when Leo fails to find his prey, he considers suicide.  When he passes that up, he joins a sect of monks in Mt. Fuji and finds inner peace, attaining the rank of Bodhisattva.  After years among the monks, Leo returns to civilization and hears the news that many people have been taken hostage in Hong Kong… in a building encased in stone. 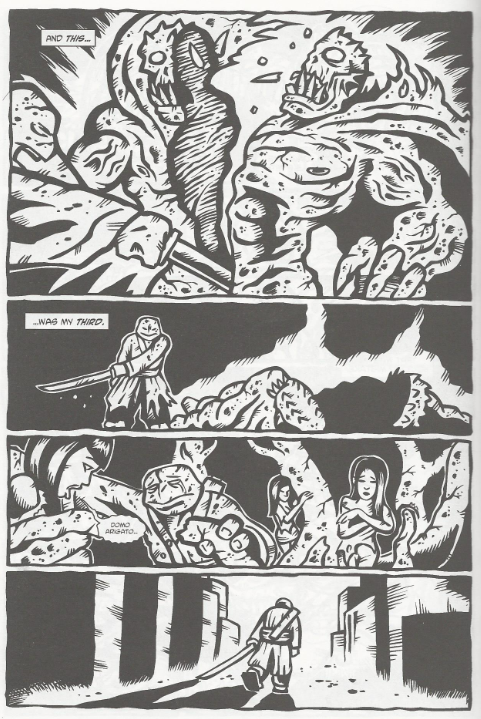 Leo goes to Hong Kong and infiltrates the building through the sewers.  He finds the hostages ensnared in stone tentacles, being lorded over by Complete Carnage.  The villain mocks Leo, but Leo tells him that he hasn’t come to fight.  Rather, he’s come to forgive him for killing Radical.  Complete Carnage laughs at the idea and snaps the neck of one of the hostages.  Leo erupts into a blind rage and the two fight.  Eventually, Leo slices Complete Carnage in two right down the middle, killing him.  Realizing he’s failed in his mission, Leo discards his katana, swears off killing, cleanses himself and retreats once more from civilization. 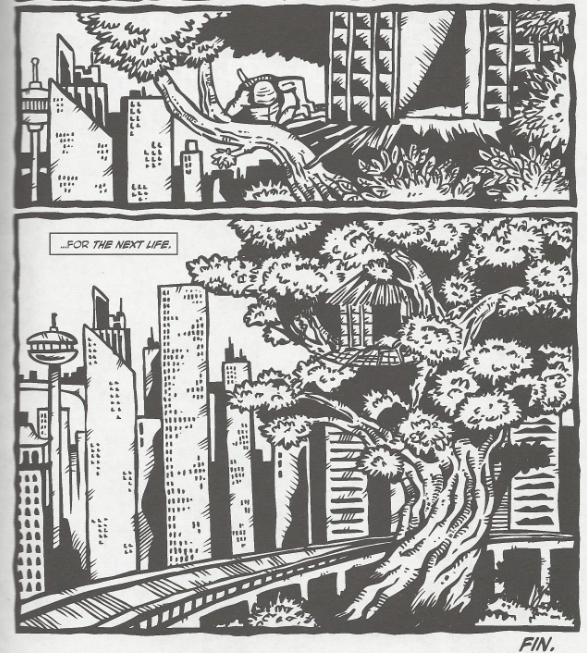 2099.  After meditating upon all of this, the elderly Leo climbs into a small treehouse to rest, saying that he’s at last ready for the next life.

*This story explains why 45 year-old Leo in Tales of the TMNT (Vol. 2) #13 and #14 was so grouchy.  The origin of elderly Leo's cybernetic bokken was also explained in that story.

*Complete Carnage was thought dead in TMNT (Vol. 1) #27.  The Turtles defeated a clone of him in The Savage Dragon #22.

*This issue also came with a bonus story, “Fathers and Daughters” by Tupper and Kudranski, and a bonus pin-up, “Winter Walk” by Michael Dooney.

*In the letters page of TMNT (Vol. 4) #25, a reader asked if there was anything between Leonardo and Radical.  Laird replied, "Yes, they do share a special bond, but what that bond IS has yet to be revealed.  Maybe in an issue of TALES...?"  This issue would seem to explain that bond, though it may not have been what Laird had in mind...

*In an "Ask Peter" Q&A on Peter Laird's TMNT blog (posted Nov. 18, 2013), a fan inquired as to Laird's personal thoughts on "Swan Song".  His response was thus: "I have to admit, with a bit of embarrassment, that there are some 'Tales of the TMNT' stories which I have not read, or even reviewed the premises for, and that I believe is one of them. So I can't really comment on that. I will say this, though -- I've never been a fan of the 'human/Turtle love story' thing."

“Swan Song” is a very frustrating story, mostly because it has the potential to be a classic but falters on some unforgivable levels.

What we have here is the final tale of Leonardo.  At the time, Murphy was getting into telling future stories that saw the Turtles meet some rather depressing ends (see my article on the future of the Mirage universe for more on that) and this was Leo’s big finish.  He wastes what seems to be the last half of his life (or maybe more than that since he lives to be over a hundred) first on a mission of revenge and then on a mission of forgiveness (both for himself and his enemies) that ultimately fails.  It’s kind of sad to know that when looking at the entire lifespan of Leonardo, more than 50% of it is spent in misery and failure.

Living in civilization, he was unable to achieve spiritual oneness.  But then when he and Radical retreat to the southwest, he attains a higher plane and also finds love.  When they return to civilization, though, Radical dies and Leo wastes years of his life fruitlessly hunting for revenge.  When Leo retreats to the monastery in Mt. Fuji, he attains inner peace and learns about forgiveness.  When he goes to Hong Kong, he flips out and kills Complete Carnage, failing in his training.  Then when he goes back to Mt. Fuji, he calms down again and comes to terms with everything.  But when he goes back to San Francisco, it’s to die all alone (or so is the implication, but never stated outright).

You see the pattern here, right?  It actually follows the theme of “Dreams of Stone” in a way, which was the story that introduced spirituality and the concept of “man vs. nature” to Complete Carnage and Radical.  Basically, it boils down to “Man = Bad” and “Nature = Good”.  Not nearly as deep a philosophy as Murphy’s script would like you to think it is.

What sticks a knife in this story isn’t the philosophy or anything like that.  What hurts it is the utterly insincere romance between Leo and Radical which this entire tale hinges on.  Their pairing is so utterly, inexplicably random you’d think you were reading something from Fanfiction.net.  In none of their appearances together had Leo and Radical ever intimated a romantic interest in one another.  There was never any build up to this positively vital, life-changing relationship.  They hook up for the first time on Page 6 and by Page 8 they’re soulmates who were destined for each other and are forever bonded in a spiritual oneness light years beyond the frail human concept of “love”.

The story has to TELL you how in love they are because none of the groundwork was ever laid for their romance, so the entire emotional center of this story rings hollow.  And really?  Radical?  The Mirage TMNT canon isn’t exactly spoiled for choice when it comes to recurring female characters.  I imagine if the dart had landed elsewhere on the board, Leo would have had an eternal bond of spiritual synchronicity with Robyn O’Neil.

Also, Radical is reintroduced to the TMNT comics for one reason and one reason only: To die so that Leo can feel sad and have a more interesting story.  Now, I really don’t like to use internet buzz words like “fridging”, because more often than not, people use the term so casually and improperly that it’s lost all genuine meaning (“female character dying” does not always equate to “fridging”).  However, in this instance, it really is a genuine case of “fridging”.  Radical was plucked randomly from the depths of TMNT obscurity for no other reason than because she was female and because Leo needed a female character to die and make him more interesting.  It’s really pretty awful.  Radical amounts to nothing more than a prop in this story, far be it a real character.

And jeez, what is with her dialogue?  Remember Radical, the super heroine with an attitude and a sense of humor who made quips?  Well, in this story she talks exclusively in stilted pseudo-spiritual babble and odd, unnatural phrases.  She awkwardly refers to Leo as “my love” (as if she’s reminding the audience for the dozenth time how in love they are) and only speaks in these labored soliloquies about the cycle of life and death.  Here’s a prime piece of dialogue for you to mull over.  Leo says, “And then we step into the great unknown.”  Radical replies with, “Perhaps.  Or perhaps into the great… KNOWN.”

And other things don’t add up.  Like, how did Complete Carnage come back to life, anyway?  He was robbed of his powers by the great spirits and dissolved into nothingness on the astral plane.  No explanation is ever offered.  And why is he suddenly a mass murderer and implied rapist?  He was a goof in all his other appearances.  And how the fuck does getting chopped in half KILL him?  Remember when he was completely disassembled yet all his dismembered parts continued to live autonomously?

So much of this story is sloppy beyond reason.  That’s why I said the whole thing reads like fanfiction.  Established characterization and internal logic is jettisoned when it proves inconvenient to the story Murphy and Dumais are desperately struggling to tell.  I WANT to like this story for the broad strokes involving Leonardo’s failures and how he conquered them into old age, but the SUBSTANCE of the story just isn’t there.

Steph Dumais’s artwork goes for this sort of ultra-flat, almost woodcut style and it certainly stands out amongst the other artists on Tales of the TMNT.  I remember disliking it when I first read the issue, but the more I go over these pages and evaluate them, the more I appreciate the simplified aesthetic take.  I wouldn’t want to read too many issues of TMNT with this look, but it’s a fresh break from the usual.

What Dumais mostly draws, unfortunately, are scenes of traveling.  Leo walking through cities, through the southwest, through fields, along dirt roads… So much of this story involves that cycle I talked about (retreating from civilization, going back, retreating, going back) that the narrative is reduced to a lot of walking.  Dumais doesn’t get the most exciting material to draw, but the fight with Complete Carnage looked alright even if the lack of lineweight to accommodate the flat style made the chaotic pages a little tough to read.

“Swan Song” is… well, it’s a swing and a miss.  I appreciate that it TRIED to tell this grand epic that covered the depressing (yet somewhat hopeful) end to Leonardo’s life, but it still strikes out for all the reasons I mentioned above.  Still, it ties in to a LOT of other stories in the Mirage canon and plays an important role in the grand scheme of things.  So I guess I like “Swan Song” in how it affects other TMNT stories, not so much for what it actually is on its own.

Grade: D- (as in, “Don’t try to tell me Leo and Radical didn’t do it in that tent.  The sword plunged into a crack in the earth wasn’t exactly subtle symbolism”.)