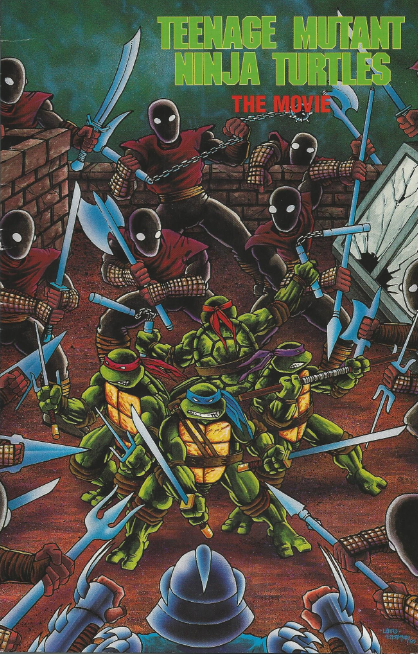 Channel 6 news reporter April O’Neil is covering a recent crimewave plaguing New York; one she doesn’t feel the local authorities are doing anything about.  As she heads to her van after dark, she’s attacked by a group of thugs, but saved by a quartet of shadowy figures from the sewer.  As she purloins a fallen sai and heads to the police station, those shadowy figures in the sewers turn out to be… 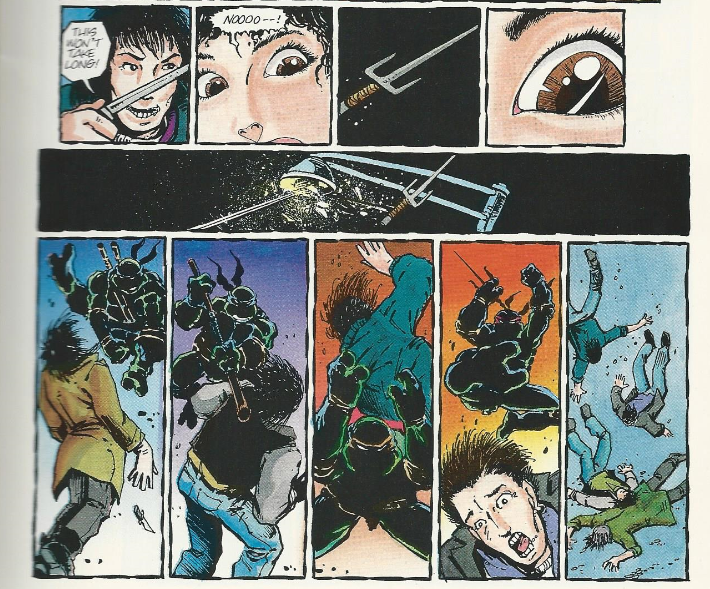 The Teenage Mutant Ninja Turtles!  They’re celebrating their first battle, except for Raph, who wants his sai back.  They return home to Splinter and order some pizza while Raph goes out for a movie.

Meanwhile, a crazy man sits in his apartment watching the news on TV.  He finally snaps and decides to do something about all the crime in his city.  Later, as Raph leaves the theater, he stops a purse snatching and follows the criminals into central park.  The crazy man, Casey Jones, gets to them first and begins beating on them with a hockey stick.  Raph intervenes and he and Casey fight.  Casey slugs Raph and gets away.  The Turtle goes back home to the lair and Splinter calls him over for a talk, warning him to get his anger under control. 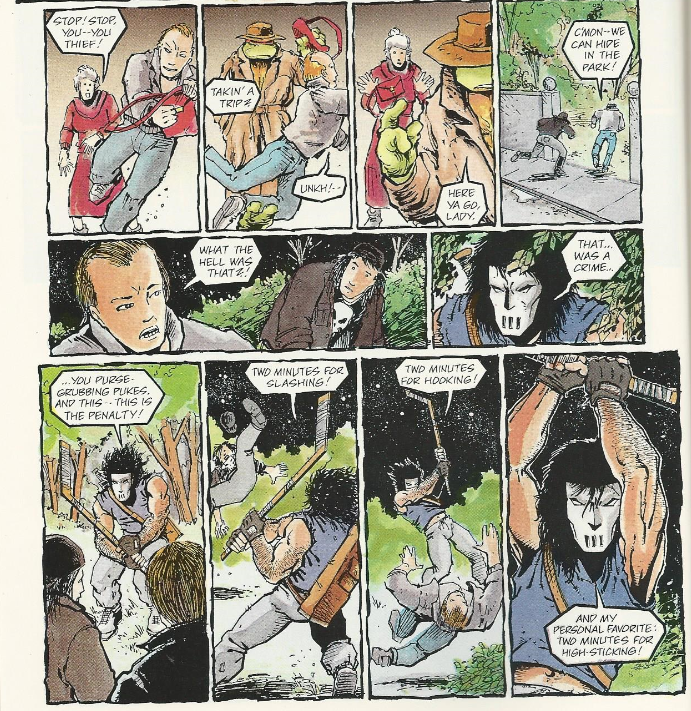 At April’s apartment, her boss Charles and his delinquent son Danny stop by to see that April’s okay.  April shoos them away and heads to City Hall to antagonize Police Chief Sterns for not taking the Foot Clan connection regarding the crimewave seriously.  The Turtles watch her on the news and Raph sees a chance to get his sai back and leaves.  Another figure dressed in armor watches the same report and dispatches his henchmen to deal with her.  And at the same time, Danny is arrested and taken past Chief Sterns’ office.

In the subway, April is attacked by several Foot Soldiers who want to silence her.  She’s saved by Raph, but knocked out in the process.  He takes her back to the lair, unaware that a lone Foot Soldier is following him.  When April awakens, and when she calms down, Splinter tells her the story of how they came to be: The baby turtles in the sewer, the canister of chemicals that bathed them all in ooze, etc.

She then invites them back to her apartment above the Second Time Around Shop and after they get to know each other, the Turtles head home.  Unfortunately, they find the lair in shambles and Splinter missing.  They return to April’s apartment, unsure of what to do.  Meanwhile, Sterns finds out about Danny’s arrest and presses Charles to get April to drop the case.  Charles and Danny stop by her apartment and while Charles tries to get her to let the Foot Clan case go, Danny thinks he glimpses the Turtles hiding. 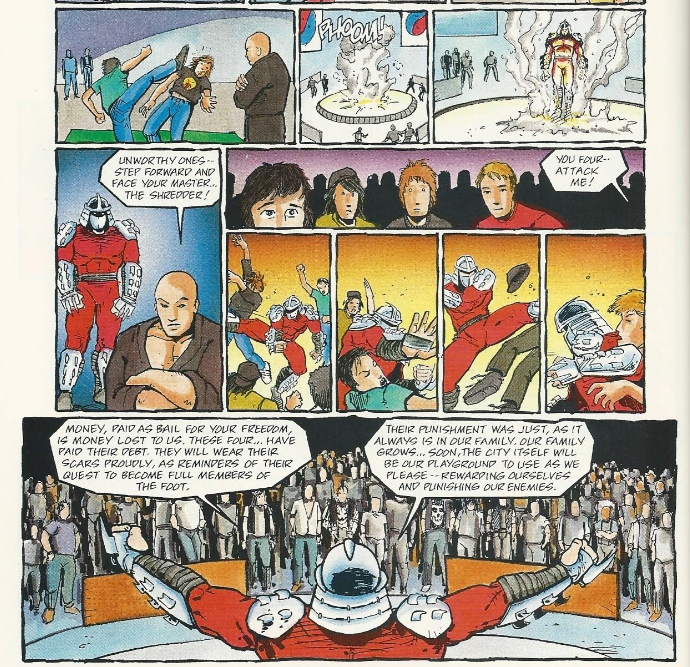 At a warehouse on East and Lairdman, the Foot Clan and their band of young thieves assemble.  Their leader, the Shredder, and his lieutenant, Tatsu, punish several young thieves who were caught and had to be bailed out of jail.  The Shredder tells the teens gathered that if they want to be a part of his family, they must earn their place amongst the Foot.  Of interest, he wants to know more about the freaks who have become a threat to their operations.  Danny then raises his hand.

Later that night, Raph gets fed up with waiting around in April’s place instead of looking for Splinter and goes to the rooftops to cool off.  He’s spotted by Casey Jones, but even worse, he’s attacked by the Foot Soldiers and Tatsu.  The fight spills into April’s apartment and even though Casey shows up to help, the Turtles are outnumbered.  They gather up the injured Raphael as the building catches on fire and escape through a back door.  As Casey holds back the Foot Soldiers, he hears a message for April from Charles, firing her.  They all escape in April’s van and flee the city.

Witnessing the violence, Danny regrets his actions and returns to the warehouse to talk to Splinter (who has just survived an interrogation session from Shredder).  Shredder blames Tatsu for letting the Turtles get away and in a rage, Tatsu murders one of the young Foot Soldiers who was under his command.  Danny watches this in horror as Splinter tells him about the true nature of family. 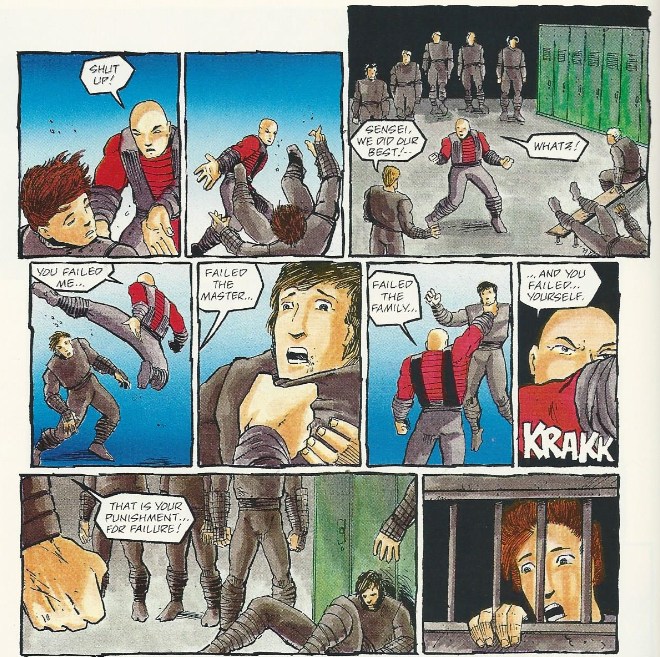 The Turtles escape to April’s old family farmhouse in Northampton.  Leonardo takes to watching over the recovering Raphael, while Donatello begins a friendship with Casey Jones and Michelangelo begins training more seriously.  April also develops a relationship with Casey, albeit a budding romance.  Raph soon recovers and Leo receives a psychic message from Splinter.  The Turtles gather and focusing their minds and bodies, speak telepathically with their father.  Knowing that Splinter is alive, the Turtles decide that it’s time to return to New York.

Quietly, they go back to the lair, though Casey stays on the streets to stand guard.  They find Danny hiding in the place and April allows him to stay for the night on the condition he go home to Charles in the morning.  As they sleep, Danny steals one of April’s drawings of the Turtles and sneaks back to the warehouse.  Casey sees him leaving and follows.  Danny goes to talk to Splinter again, who tells him about Oroku Nagi, Hamato Yoshi, Tang Shen and Oroku Saki (you know the story).  Splinter also tells him about how he was unable to save Hamato Yoshi, but did scar Saki’s face in the fight.  The Shredder catches Danny, finds the drawing and realizes that the Turtles are back.

The Turtles are prepared for the attack (having woken up and found Danny missing with some of April’s drawings) and ambush the Foot Soldiers when they show up.  Meanwhile, Casey frees Splinter and Danny, defeating Tatsu in battle.  He also inspires the teenagers to abandon the Foot Clan and return to their real families. 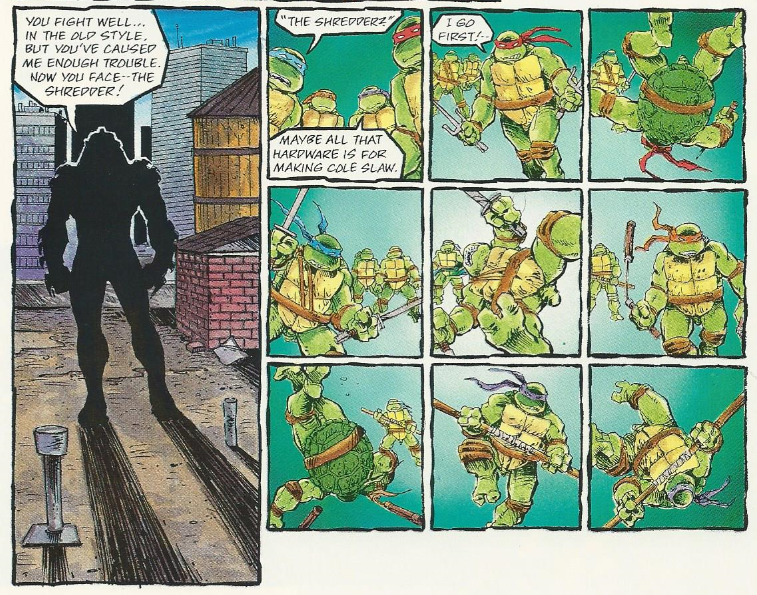 The fight escalates onto a rooftop, where the Turtles face down the Shredder (only to get trounced).  Casey shows up with Splinter, who enters the battle and reveals that he was the one who scarred Shredder’s face.  Shredder attacks and Splinter flips him over the edge of the roof, evidently killing him.

The police arrive to clean up the mess and the teenagers Casey inspired tell Chief Sterns that he’ll find all the evidence of the Foot Clan at the warehouse on East and Lairdman.  Charles reunites with Danny and then rehires April (who finally kisses Casey).  The Turtles and Splinter celebrate their victory with a cowabunga. 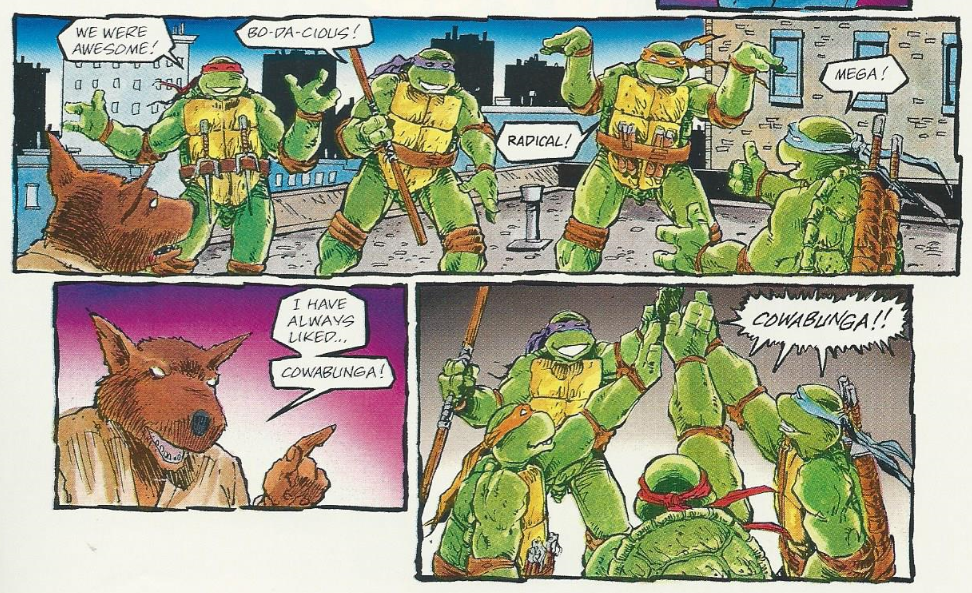 Several weeks later, April and Danny pitch the idea of the Teenage Mutant Ninja Turtles to the Mega Comics publisher.  The editor rejects the idea for being too farfetched.  The Turtles, watching from a window, find that assessment insulting.

*The story continues in TMNT Movie II: The Secret of the Ooze.

*Obviously, this one-shot comic is an adaptation of the 1990 “TMNT: The Movie” motion picture from Golden Harvest.

*The Archie newsstand edition was published in the UK in 1990 by Fleetway under the title Teenage Mutant Ninja Turtles: The Movie.  Oddly, the "Ninja" was not changed to "Hero" as was done in nearly all other TMNT media released in the UK at the time.  A new cover by an in-house Fleetway artist was used for this printing.

Note: The only version I own is the Archie Prestige Edition, so that is the version I am reviewing.

I don’t normally care much for comics that adapt movies and TV shows, as it always seems like a “why bother?” sort of situation, but this first adaptation of the live action film series is a little different.  Having been adapted from an earlier draft of the screenplay, it contains a lot of scenes that were either altered or deleted from the finished film.  It sort of gives you a peek into the movie we might have gotten, though largely it plays the same.

A few of the more interesting differences include the epilogue with the comic publisher (which was filmed, but never used) and a back story that actually included Oroku Nagi (the version in the film combines his character with Oroku Saki).  What I really thought was cool was that this adaptation contained the original version of the scene where Tatsu punishes the young Foot Soldier, murdering him.  The scene in the film is exactly the same, but they dubbed in groans to indicate the teen survived (though the reactions from everyone around him are incongruous; they clearly think he’s dead).  There are other snippets here and there, like Casey watching April’s news report and being inspired to fight crime (in the movie, he just randomly shows up already as a vigilante with no build up) and a bit of character development for Michelangelo, who takes being defeated the hardest and begins to train more seriously.

It’s a bizarre situation, because while these little odds and ends that were cut from the film but retained for the comic adaptation actually help to improve the narrative cohesion of the plot, the flow of the story is INCREDIBLY condensed.  They compress the whole film down into a 50-page graphic novel, and it’s impressive how much content Eastman and Laird were able to keep, but this thing flows FAST.

The story doesn’t suffer so much as the action does; fight scenes are very brief and over as soon as they start.  Eastman’s layouts are great and for 50 pages he crams in as much as he can (this was a very action-heavy film), but the epic showdown with the Shredder spans a whopping two and a half pages (the Turtles only battle him for the “half” portion of that “two and a half” pages).  It’s my understanding that the Mirage edition (and thus the IDW edition) contains bonus splash pages and spreads which decompress the action sequences so that they aren’t so brisk.  I’ll have to check that edition out some day and see if it reads better than the Archie version.

The adaptations for the sequels aren’t as good as this first one and I wouldn’t necessarily recommend those comics to anyone, but I do think this first adaptation is pretty cool and worth checking out.  Lawson’s finishes over Eastman’s layouts look excellent and Steve Lavigne’s painted colors give it a nice feel (though he miscolors the bandanas during the campfire sequence, making it a little confusing).  I don’t know about the colors in the other versions, unfortunately.

Anyhow, you’re kind of spoiled for choice when it comes to versions of this thing, but while I like Lavigne’s colors in the Archie Prestige Edition, I can’t argue that IDW’s edition is likely the best version out there (all the bonus pages, in color, with Eastman’s complete layouts).  I’ll have to grab that one of these days.