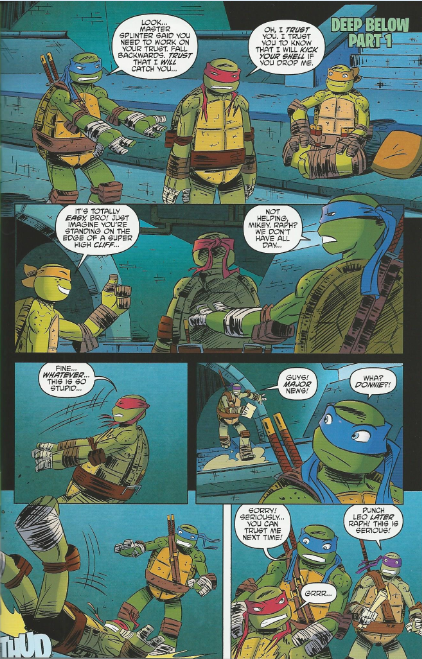 Down in the lair, Raph is having trouble cooperating with Leo during a trust exercise.  Suddenly, Don barges in with a message he unscrambled from a Kraang frequency.  Apparently, the Kraang are planning to drain the ocean into another dimension via a portal device they’ve set up on an offshore oil rig.

The Turtles use their gliders to get to the rig, but they’re spotted by the Kraang who open fire.  Raph questions Leo’s strategy as they drop in and start fighting. 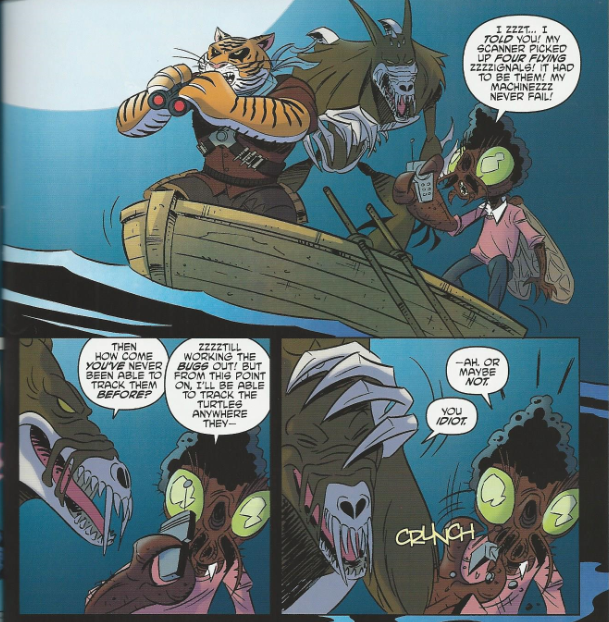 Not far away, Tiger Claw, Rahzar and Baxter Stockman have spotted the Turtles from their boat thanks to Stockman’s (unreliable) Turtle tracking device.  They decide to ambush their foes.

The Turtles fight their way to the portal command controls, but a Kraangdroid activates it before they can destroy the power device.  If they destroy it now, there could be a humongous explosion.  Don tries to deactivate the portal, only to have the power source destroyed by a blast from Tiger Claw’s gun.  The Turtles and the evil mutants flee as the portal goes critical and explodes. 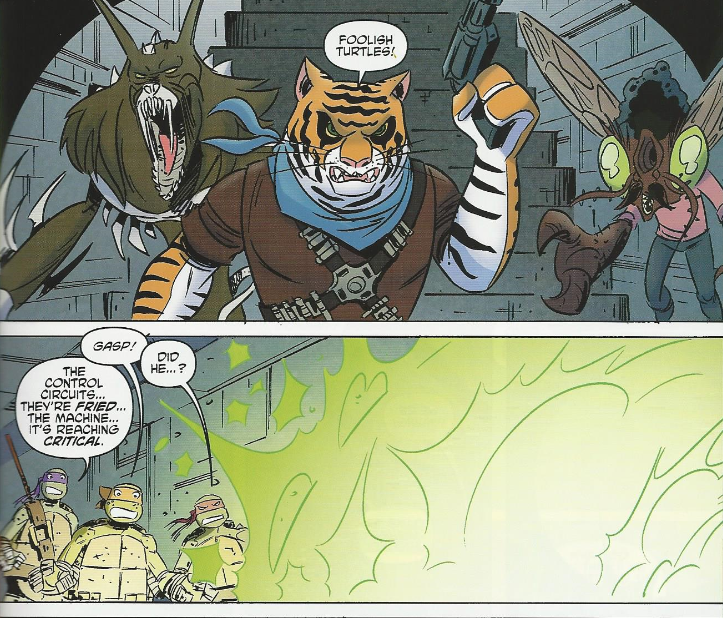 As the smoke clears, both teams find themselves trapped in the rig as it sinks to the bottom of the ocean, filling with water.  Tiger Claw and the evil mutants want revenge while Raph has had enough of Leo’s leadership and goes to fight them, ignoring the more immediate problem as the water rises…

*The story continues in “Deep Below, Part 2”.

*The last time Tiger Claw had both eyes was in the season 2 two-parter "The Manhattan Project" (where he lost it after getting eaten by a worm and dragged to another dimension).  2 episodes later, Baxter Stockman was mutated in the episode “The Lonely Mutation of Baxter Stockman”.  3 episodes after that, Tiger Claw returned with an eye patch.  At no point did two-eyed Tiger Claw and mutated Baxter Stockman coexist in the cartoon series, making this a continuity error.

*The cover correctly credits the artist of this story as Dario Brizuela, but the credits page mistakenly identifies him as Chad Thomas.

New Animated Adventures is catching up a bit with season 2 with this issue, as Stockman-Fly and Casey Jones both finally show up (Casey in the second story, not this one).  The lead time on story production makes it hard for this comic to stay concurrent with the events of the TV series, I know, but it was lagging pretty far behind there for a while.

It looks like we’re in store for another “Raph learns to trust Leo’s leadership” sort of story, which you may or may not be sick of depending on how much TMNT media you’ve ingested over the decades.  What’s nice is that author Landry Walker puts it in the background as an additional conflict instead of at the forefront where it might elicit sighs of boredom.  There’s a nice flow of compounding frustrations in this script, as things steadily get worse and worse.  Raph whining is actually the least of their problems.

We’re getting Shredder’s evil mutants (actually called that in the narrative text like it was their team name: “Evil Mutants!”) in a fun assemblage, like kids playing with their action figures and it’s something I really like.  I love seeing the different villainous henchmen mixed and matched, something the older cartoon rarely did and something the new cartoon doesn’t do nearly enough (though Shredder’s utterance of, “Get me EVERYONE” in “The Legend of the Kuro Kabuto”, followed by the full assemblage of his mutant forces was pretty sweet).  Hopefully we’ll see more use of the “Evil Mutants!” in future issues beyond just the solo scheming they’ve been doing for a while now.

As mentioned in the Turtle Tips, artist Dario Brizuela (mistakenly credited as Chad Thomas) draws Tiger Claw with both eyes and that's kind of a problem.  It would be a petty grievance and forgivable if it weren’t for the fact that he spends the issue demanding vengeance from the Turtles… And the only reason he WANTS vengeance is because he’s supposed to be missing an eye.  An editor probably should’ve caught that, too, but whatever.  This book’s for 8 year-olds.

Anyway, an exciting opening chapter and maybe it’ll lead to more serialized short form tales in New Animated Adventures.  I know they want to maintain an accessible episodic approach to the series, but now that it’s functioning as an anthology, I think they can have the best of both worlds (one standalone tale, one serial installment).

Grade: B (as in, “But really?  They’re stealing the ocean, now?  I just don’t understand what the fuck the Kraang actually hope to accomplish half the time.  Would they even know what to do with an ocean if they got one?”)