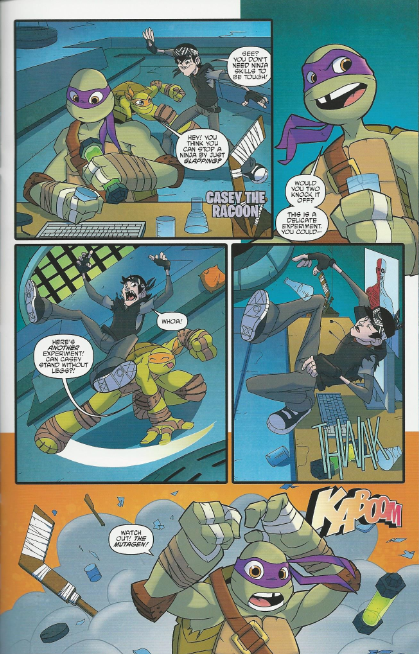 Sparring, Casey and Mikey tumble into Donnie’s lab and hit a desk with a vial of mutagen on it, causing an explosion.  When the smoke clears, all Mikey can see is a small raccoon wearing Casey’s hockey mask.  Thinking Casey has been mutated, he chases the raccoon down the sewer tunnels, hoping to get him back.

As Donnie recovers, he finds Casey looking for all his gear that got scattered in the explosion.  He and the other Turtles then get to cleaning up the mess, wondering why Mikey isn’t there to help. 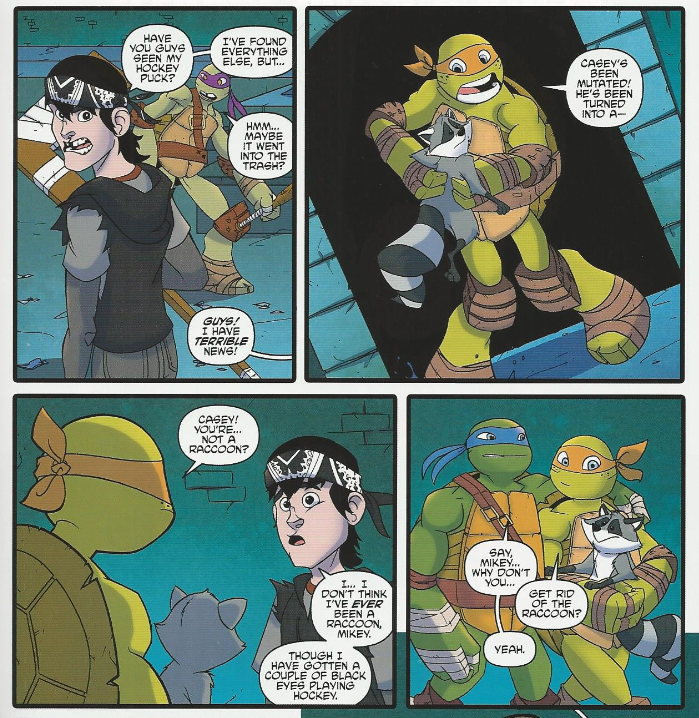 Elsewhere, Mikey corners the terrified raccoon and carries him back to the lair to deliver the terrible news to his brothers.  Seeing Casey is still human, he quietly lets the raccoon go.

Mikey laments that he was wrong about the situation, only to see Casey rifling through a garbage can (actually looking for his lost hockey puck).  Now re-convinced that Casey’s DNA has been scrambled with a raccoon’s, Mikey goes to the kitchen to make him a pizza topped with garbage.

Oh Mikey, you’re so stupid.  That’s, like, the long and short of your characterization half the time.  You are mentally handicapped.

Anyway, considering how action-heavy the main story in this issue was, this light comedy relief back-up was perfectly fitting if not exactly hilarious.  There’s a bad lettering error on the second page where Mikey asks himself if he’s alright.  Along with two-eyed Tiger Claw in the previous story and the incorrect names on the credits page, I think the Quality Control Department at IDW was on a coffee break when this issue went to the printer.

Anyway, I don’t really want to grade these kinds of droll comedy strips anymore, so…