Perrier in The Old Switcheroo! 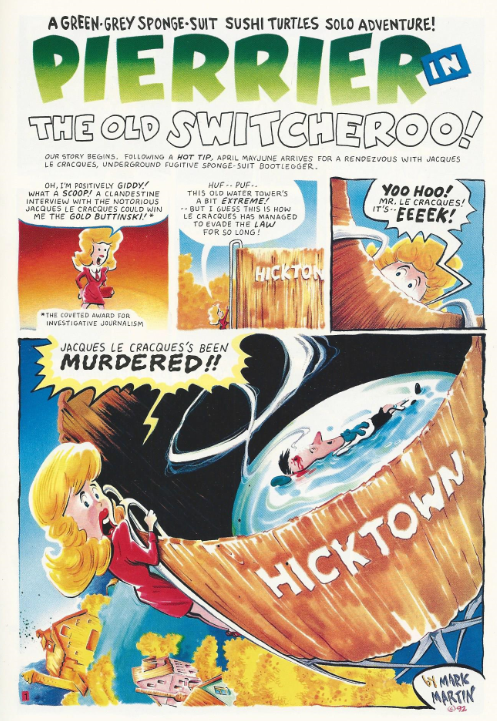 “Perrier in The Old Switcheroo!”

April Mayjune has gone to Hicktown to interview Jacques le Cracques, the famous sponge-suit bootlegger.  April thinks this will win her a Gold Buttinski in investigative journalism, but when she finds the corpse of Jacques in a water tower, a nearby police officer mistakes her for the killer.  April is carted off to jail and uses her one phone call to beg Perrier for help. 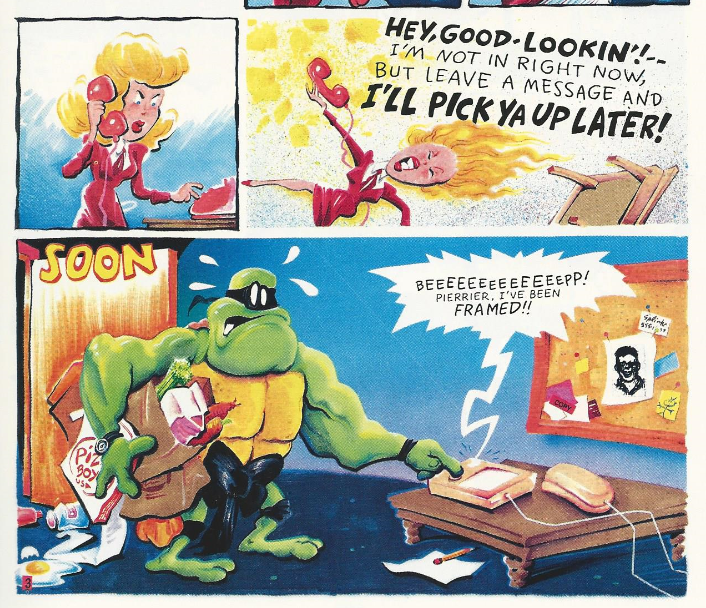 Perrier arrives at the jail, but the lady at the front desk makes him check in his trusty microphone and locks him in the jail cell with April.  Just then, Jacques le Cracques turns up outside the cell, alive and well.  He explains that it was all a ruse: His corpse was a sponge-suit, the cop was him wearing a sponge-suit, the police car was also made of sponge and the old lady at the desk was his mother.

April wants to know why the big charade and he explains that back in France, the frogs love the Sushi Turtles and Perrier is the most popular.  He intends to sell bootleg Perrier sponge-suits and make millions.

As he starts to measure Perrier, he hears the police outside tell him to surrender.  Being French, he surrenders immediately.  As Perrier and April take him away, Perrier reveals that he simply used a voice-throwing trick to make Jacques THINK the building was surrounded.  April phones the report in to her boss, Charles Pennyworth, and he tells her she’s sure to win a Gold Buttinski.

*This story is continued from “Viceroy in Action, Not Words!”.  It is the last of the Green-Grey Sponge-Suit Sushi Turtles comics.

There.  No more Sushi Turtle comics.