Viceroy in Action, Not Words! 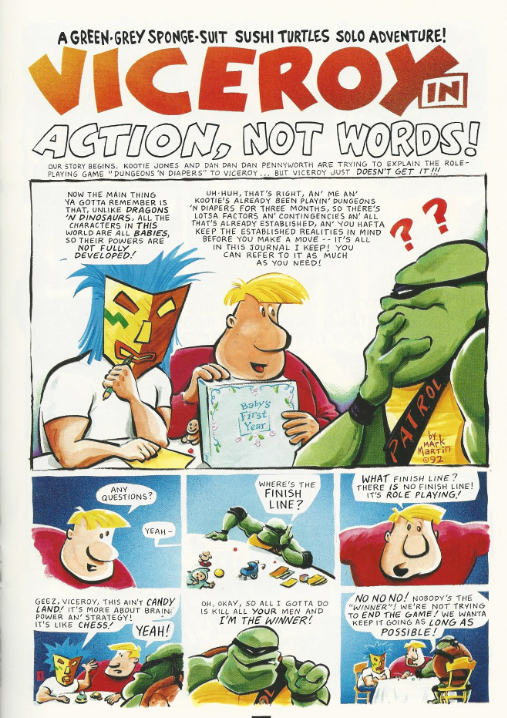 “Viceroy in Action, Not Words!”

Viceroy has joined Kootie Jones and Dan-Dan-Dan Pennyworth for a game of Dungeons & Diapers, though the Sushi Turtle is not exactly grasping the concept of role-playing games.  Dan and Kootie try to explain to him the intricacies of die-rolling, percentages and artfully painted miniatures when suddenly there’s a great earthquake. The trio find themselves inside a playpen being lorded over by Dr. Junior, an evil baby mad scientist from Dimension ABC.  He has built an interdimensional formula-draining apparatus to steal all the baby food from Earth.  And to make sure he succeeds, he’s bound Viceroy’s hands in ultra-soft Pampers diapers so that he can’t use his “clapster” technique to shut off the device.

Kootie and Dan try to use what they’ve learned from Dungeons & Diapers to cast spells, but nothing works.  As they argue, Viceroy stretches his eyelids as wide as he can and then slams them down full force, creating a clapping sound.

Later, Kootie and Dan resume their game, but they’re constantly interrupted by Viceroy and his clapping coming from upstairs.  In reality, the “clapping” is actually the sound of Viceroy delivering a well-deserved spanking to Dr. Junior.

*This story is continued from “Velveeduh in The One That Got Away”.  The story concludes in “Perrier in The Old Switcheroo!”.

Well, this installment in the Sushi Turtle shorts actually had a story to it, so that’s good.  It was a dumb story so, you know.  One step forward, two steps back.

I can’t really think of anything else to say about the short.  I’m mostly just reviewing these for posterity’s sake so the information is cataloged.  I don’t particularly like them.

Grade: I’m just not in the mood to grade this shit.