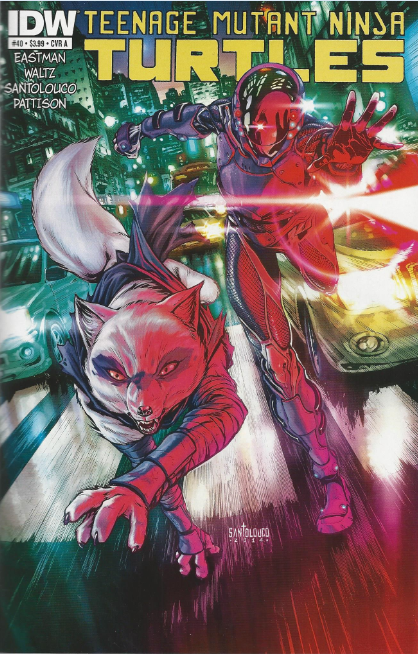 The Turtles, Hob’s army, Nobody and Alopex have their hands full dealing with Bebop and Rocksteady, who are absolutely impenetrable.  Rocksteady downs Slash by tossing a car at him and the Turtles keep trying to chip away at the mutants, to little success. 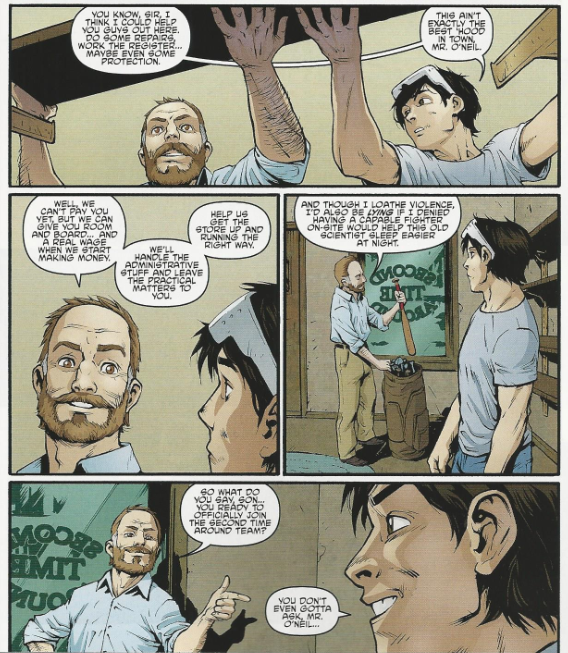 At the Second Time Around shop, Casey is giving Mr. O’Neil some free lessons in home maintenance as they get the shop ready to reopen.  The two are getting along really well, though Mr. O’Neil is concerned that Casey’s “dangerous lifestyle” might bring April to harm.  Casey promises that he isn’t like that and would never let anything happen to April.  Mr. O’Neil then offers him a job at the shop when it opens up along with room and board; an offer which Casey happily accepts.

Back at the fight, Rocksteady smashes Michelangelo and Leonardo together with his sledge hammer.  Nobody attempts to taze Bebop, only to get hurled miles away into the air (her anti-gravity gauntlets saving her in the landing).  Rocksteady then grabs Raph and Alopex and likewise sends them flying to a nearby rooftop where they crash into a pigeon coop.  The thugs next get to work dismantling Herman the Hermit Crab’s armament, but he puts up a good fight with his claws.  Old Hob runs into battle, but before Mondo Gecko can join him, Splinter asks him to stay back and try a more strategic approach. 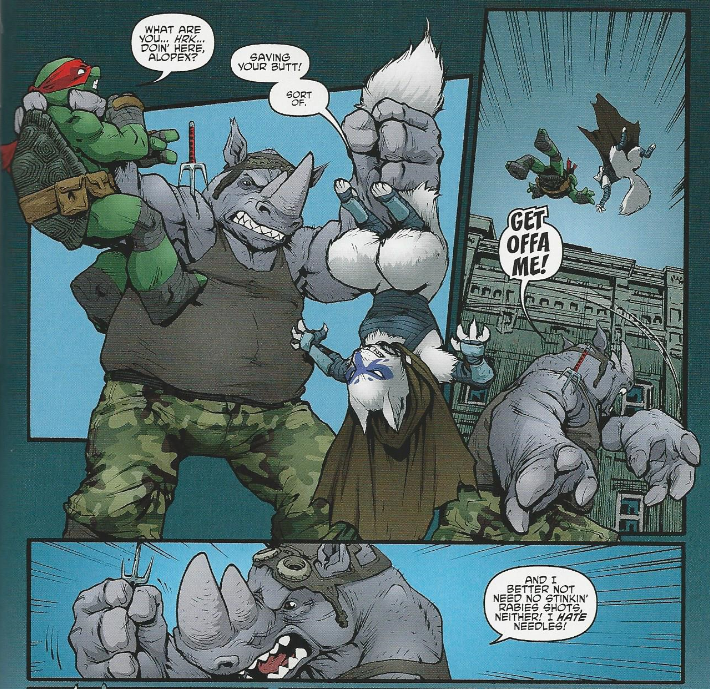 Up on the roof, Raph and Alopex are trying to get untangled from the wire mesh.  They apologize to each other for past misunderstandings, but before things can get romantic, Pigeon Pete shows up to help free them (the coop was apparently his old home and he was hiding there during the fight).

On the street, Bebop and Rocksteady have wiped the floor with Hob and Herman.  Splinter attacks them at a few sensitive areas, drawing them angrily toward a large puddle.  Meanwhile, Mondo uses his camouflage ability to sneak up to a nearby power line.  When the bad guys are in position, Mondo cuts the power cable and drops it into the puddle, shocking the two goons.  Unfortunately, that STILL doesn’t stop them.  Finally, Herman uses his heavy artillery to push them back into a condemned building and then drops the whole thing down on top of them.  That finally does it. 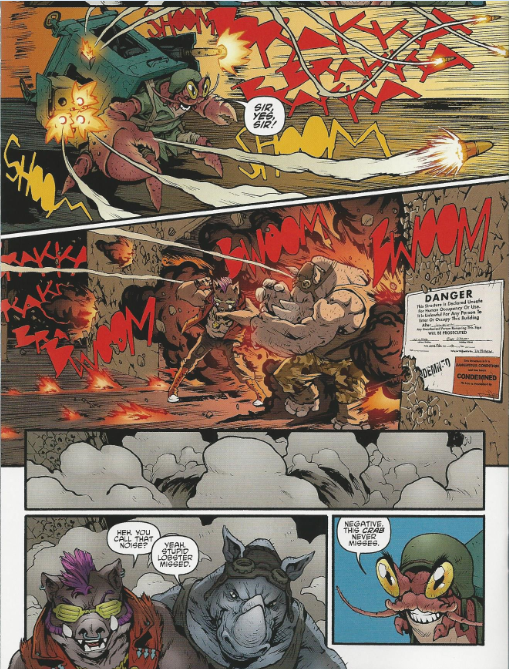 Hob offers Alopex a place in his army, but she rejects the offer, having had her fill of armies.  She then asks Nobody if they can be partners and Nobody is happy to have her.  Hob and Splinter further reconcile their partnership, as the strength of Bebop and Rocksteady prove that the Shredder and the Foot need to be stopped more than ever.  Pete apologizes to Hob for screwing up and begs not to be kicked out.  Hob isn’t mad, saying that Pete’s heart was in the right place and he’s still a member of… The Mighty Mutanimals! (dun dun duuuuuuuun!)

After everyone leaves, Bebop and Rocksteady dig themselves out of the rubble, unscathed.  They decide not to tell Karai what they’ve been up to. 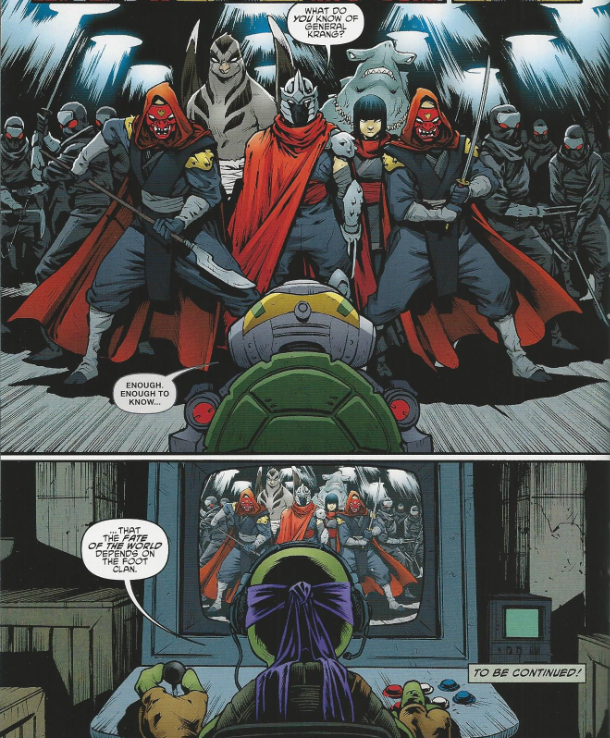 At Foot HQ, Metalhead has an audience with the Shredder and the Foot Clan high command.  Metalhead asks for help against General Krang and is willing to make a deal for the sake of the world.  Somewhere, Donatello is controlling Metalhead with a remote.

*The TMNT/Ghostbusters miniseries takes place between this and next issue.

*This issue was originally published with 3 variant covers: Cover A by Santolouco, Cover B by Eastman and Pattison, and Cover RI by Buster Moody.

While this issue was mostly one big brawl, it was a spectacular fight and every single character got their lick in… And we're talking 13 characters, here!  Even Pigeon Pete, the “comedy relief fuckup” archetype, got to do something useful and make amends.  While a few characters got taken out of the battle a little too quickly (Slash and Nobody got the shaft), there was a shining moment for each individual.  And when you’ve got 18-19 pages to spotlight 13 characters, that’s actually a pretty remarkable achievement.

For the people who may have been disappointed that Bebop and Rocksteady retained their stupidity for this incarnation, hopefully this issue further illustrates that they’re still a threat to be reckoned with in spite of their measly IQs.  11 fighters (well, 10 fighters and Pete) and the best they can do in the end is momentarily waylay the two goons and give themselves enough time to scram.  I think it shows that not every bad guy these days needs to be a criminal mastermind; there’s still room in the world for the “braindead bad guy” variety.  Just as long as they’re still threatening.  And Bebop and Rocksteady pulled that off.

The dialogue remains the weak link of the book and it’s the only thing keeping IDW’s TMNT from hitting that trifecta (“plot” and “art” being the other two categories, both of which are stellar).  The witticisms during the brawl aren’t exactly witty and that exchange between Raph and Alopex was just a lot of corny mush.  I’m torn on Hob dropping the name “Mighty Mutanimals”.  The moment was so goofy, but that NAME is so goofy to begin with that the delivery seemed ultimately appropriate.

The segues into the bonding between Mr. O’Neil and Casey continue to exist just to give Casey a storyline and man, their conversation is so… exposition-y.  Because they only get 2 pages an issue to move their plot lines forward, they have to kind of recap everything we haven’t been seeing, but work it into a “natural” exchange and that just isn’t reading well.

Hopefully Casey will have more to do during “Attack on Technodrome” than put up wallpaper and talk about his feelings.

We also have the cliffhanger at the end, with Donatello seemingly turning traitor.  I’m sure it’s just for shocks; like he’d actually join with the Foot Clan or whatever.  The “Monsters, Misfits and Madmen” arc ended with Leo having some sort of unexplained epiphany on how to deal with Shredder and Krang in a way that satisfied both himself and Splinter.  I wonder if Don manipulating Shredder into attacking Krang was part of that “two birds with one stone” strategy?  Leo hasn’t elaborated on his big idea, so we’ll just have to wait and see.

Anyhow, this “New Mutant Order” arc has been exciting, if a little unfocused.  The first chapter was a one-shot following Shredder and Krang, while these last three chapters amounted to a rather random fight scene.  I'm wondering if the original title for the arc Bobby Curnow revealed, "Territory", would have made more sense (since the two storylines dealt with factions carving lines in the sand).  And while Bebop and Rocksteady turned out to be the final bosses of the story arc, facilitating the big finish to satisfy those who follow exclusively through trade paperbacks, the arc wasn’t about them at all.  They just sort of wander into the plot, fight, and then wander back out when the smoke clears.

Ruminating on the arc as a whole, it does feel a bit spontaneous and maybe a little gratuitous.  But, you know... So what?  Maybe having a pointless, indulgent battle absorb a whole issue slowed the storyline down a bit, but I think the ends justified the means because damn was it a lot of fun.  And even on a plot level, the fight at least served to solidify bonds between Splinter and Hob, so it wasn’t entirely devoid of purpose.

Grade: B (as in, “But do geckos have the ability to blend in?  I thought that was more of a chameleon thing?”)