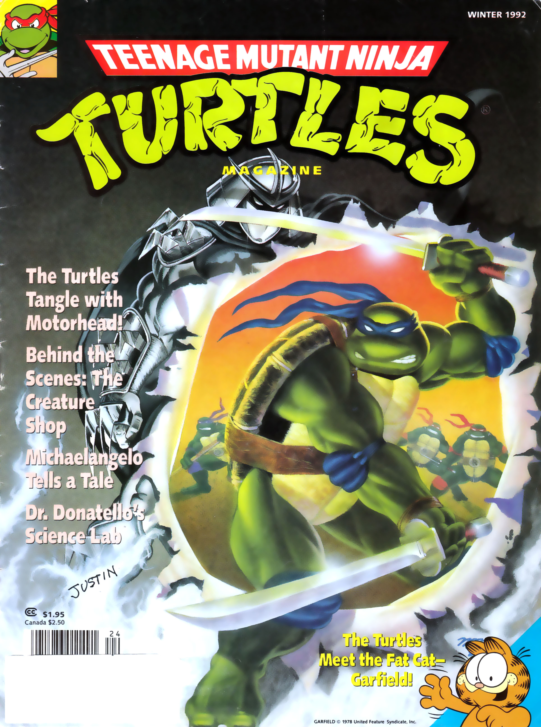 As April taxis the Turtles around town in the Party Wagon, they hear a strange news report: Someone, or something, has been stealing gas from all the service stations in New York.  The Turtles are thrilled with the news, as it may lead to mankind becoming less dependent on fossil fuels that pollute the atmosphere. 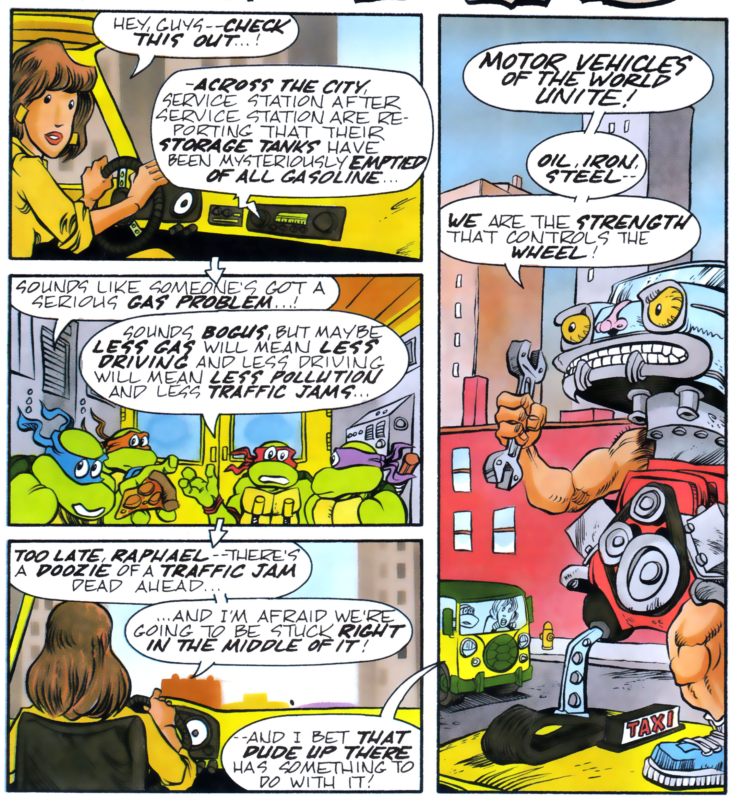 Unfortunately, the culprit is the mutant muscle car-man Motorhead.  He’s taken control of several cars in town and plans to use them to take over the world, polluting the air with carbon monoxide.  The Turtles leap from the Party Wagon to take him on, but he uses his muscle car army to keep them at bay. 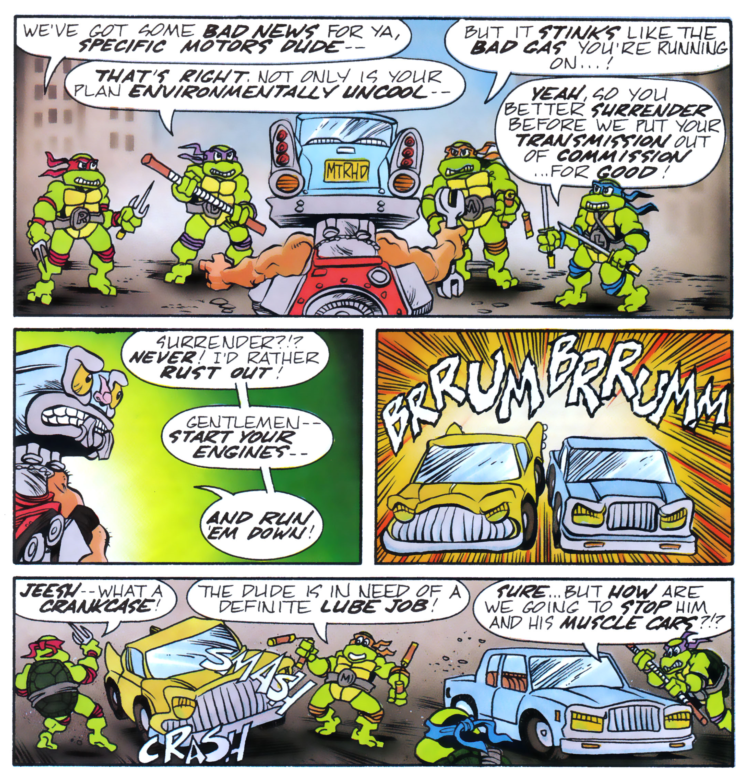 By slashing their tires and taking control of their steering wheels, the Turtles get through the muscle cars and make it to Motorhead.  Before he can do battle, he begins to sputter and falls asleep.  Likewise, all the muscle cars under his control suddenly power down.

Evidently, they were revving their engines so much that they wasted all their gas.  Even worse news for Motorhead: Now he’s double-parked!  As the meter maid writes him a ticket, the Turtles laugh.

Dressed as a Ninja Turtle, Garfield (the cat) makes his way down to the sewer lair and introduces himself to his “brothers”.  He even brings his own ninja weapon: A pizza cutter. 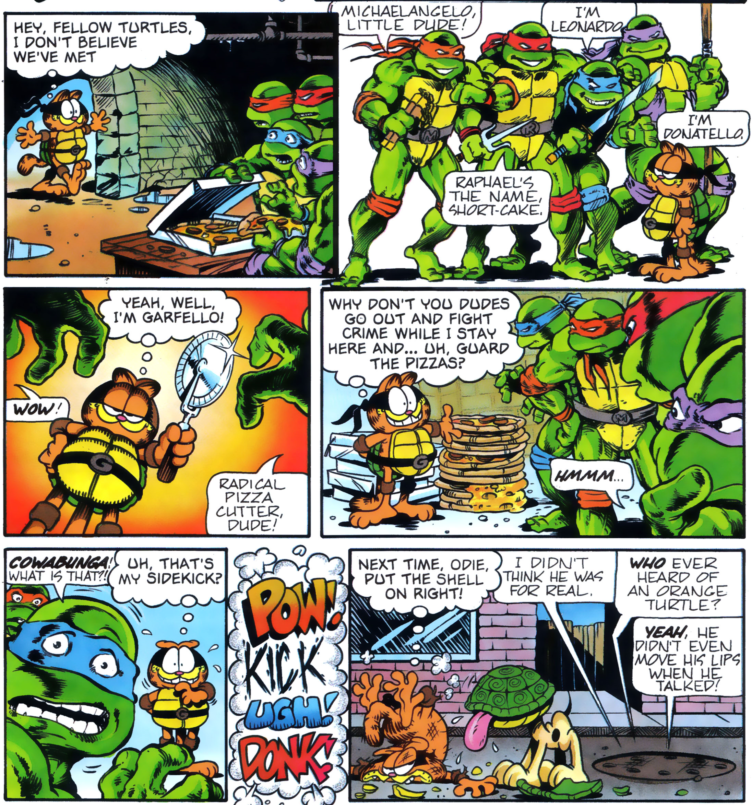 He tells the other Ninja Turtles that they’re free to go out and fight crime while he stays in the lair and guards their pizza stash.  Suddenly, Garfield’s sidekick arrives… Odie, wearing his fake turtle shell on his head.

The Turtles figure out Garfield’s ruse and kick him out of the lair.

“Three Dudes and the Beanstalk”

Master Splinter has left the lair and in his absence, Leo, Raph and Don have decided to pick on Mikey by stealing his skateboard and nunchakus.  Mikey starts to get mad, but figures he can use a nonviolent approach to convince them to quit.  So he sits them down and tells them the tale of three rude dudes named Larry, Ralph and Dan… 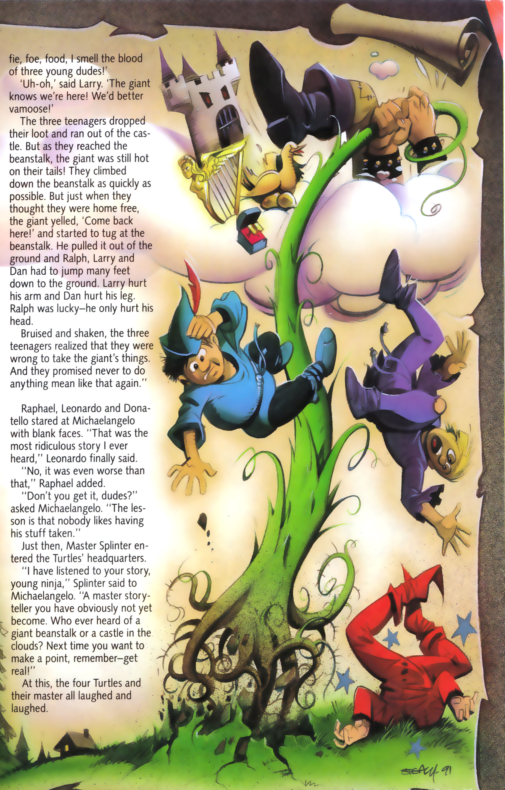 Larry, Ralph and Dan were the rudest teens in their village and they liked to steal shit… blah blah blah… they find a giant bean stalk… who gives a shit… they steal a golden harp, a goose that lays golden eggs and golden cufflinks from a giant… Jesus Christ… the giant chases them down the beanstalk and they fall and break their arms and legs… The fucking End.

Mikey asks if the other Turtles understand the moral.  They tell him his story was dumb.  Just then, Master Splinter comes home and, having heard the tale, also tells Michelangelo it was awful.  Then they all laugh at Michelangelo and wow, this thing really turned around in the last couple sentences.  Not bad.

Well, there are a variety of stories to talk about in this issue of TMNT Magazine.  All of them are pretty lame, so let’s not waste time.

Steve Murphy’s story sucks, though Motorhead looks like he would have transitioned into a Playmates action figure with relative ease.  Likely, this was one of many “pitches” to Playmates; the Mirage crew often used their comics as a means to shill ideas to Playmates for future action figures.  In regards to the toys, some of my favorites were the mutants who were people combined with inanimate objects rather than animals.  They were the rare ones in that line, guys like Muck Man and Mutagen Man and Pizzaface, so Motorhead would have definitely stood out in the collection.

The plot, though, is more of the usual from Steve Murphy.  The Turtles actually celebrate the theft of gasoline because fossil fuels are totally bogus, dude.  Save the Ozone layer!  The stream of puns during the fight with Motorhead’s muscle cars are kind of amusing, but in the most droll manner possible.

Also, this comic came out at a time when Lawson was really tinkering with his art style.  You could see it in contemporary Turtle publications like TMNT Volume 2, but there’s an aesthetic choice present in this story that I’m glad Lawson decided not to keep: Giving female characters beady little eyes, no visible noses and puffy circles for lips.  He was really pushing that design choice in the early '90s and good lord, it made his women look like blow-up dolls.  I think “Sweat, Sweat Sweet Renet” was his worst offender.  Glad he dropped it after only a couple of years; it really looked terrible.

Next up is the one-page story featuring Garfield.  Now ‘n days, instead of making jokes, Garfield is the butt of jokes and everyone harps on how unfunny his comic strip is, how terrible his live action movies are and how soulless and poorly animated his new TV series is.  It’s all true.  But back in the '80s and early '90s, Garfield was some pretty good shit.  His TV specials were often experimental in animation and storytelling and his TV series Garfield and Friends holds up especially well after all these years.  The comic strip was on the decline by ’92, yeah, but after Garfield's existential crisis in '89 (an actual storyline), the strip had kind of reached its zenith.

Anyway, that tangent on Garfield aside, this strip is on par with the humor found in other Garfield strips of the day.  Not really… funny, no, but you can tell there’s sort of a joke in there somewhere.  I recently watched a video tour of Jim Davis’ Paws Inc. studio in Indiana and man, Garfield is a fucking INDUSTRY.  So no surprise that this strip was delegated to others to complete and wasn’t wholly a Jim Davis product (Peter Laird on inks was a surprise, admittedly).  These days, Davis actually delegates most of the comic strip duties to a team of writers, inkers and colorists (though he apparently still pencils it).  Didn’t know he’d been doing that since 1992.

And we close with a text story.  It’s shit, but historically, text stories have ALWAYS been shit.  On purpose, too.  In the Golden Age of comic magazines, they were only included so that the books could qualify for second rate postage and save the publisher money.  No one ever liked them.  EVER.

I will give credit, though: The mean-spirited ending completely took me by surprise.  Everyone just cold laughs at what a fucktard Michelangelo is, even Master Splinter, and nobody learns a damn thing.  I wonder if the author was operating under the assumption that no one would actually READ his text story and so he just went ahead and gave it a cruel twist ending.  It’s actually the most entertaining thing ABOUT this issue.

Holy shit.  The text story was the most interesting thing in this magazine.  That’s really fucking bad.