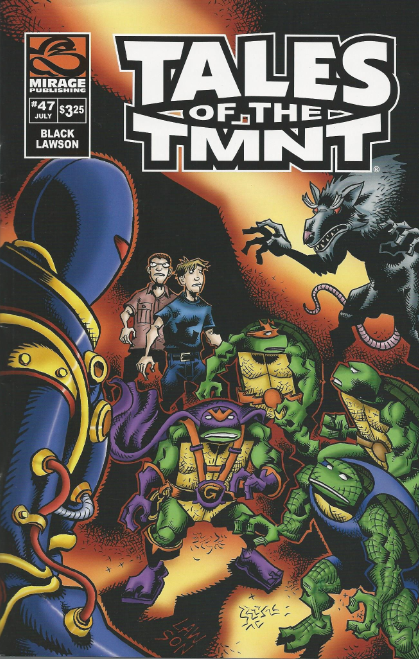 “The Secret Origins of the Super Turtles!!!”

Frontispiece: In a dramatic faux-Silver Age Marvel Comics cover parody, Renet and the other Turtles try to stop Raph from doing what he must (whatever THAT is), but he insists that he must do this thing… Alone!

In an alternate universe, things have worked out differently.  When an impending alien invasion threatened the world, the countries of Earth pooled their resources and joined forces as the Unified World.  With Chairman Lucks in charge, he vowed to create a fighting force capable of stopping the aliens.  He then turned to his chief scientist, Doctor Shreddarius, who created an army of mutated cyborg animals called the Terrorkinetics.

Later, Chairman Lucks visits Shreddarius at his lab.  Shreddarius shows him the new Terrorkinetics which he says are the next step in evolution.  Two of Shreddarius’s lab assistants, Jonas Case and Neil O’Malley, express their hope that once the Terrorkinetics defeat the aliens, the countries of the world can go back to having their individual autonomy.  Lucks feigns agreement. 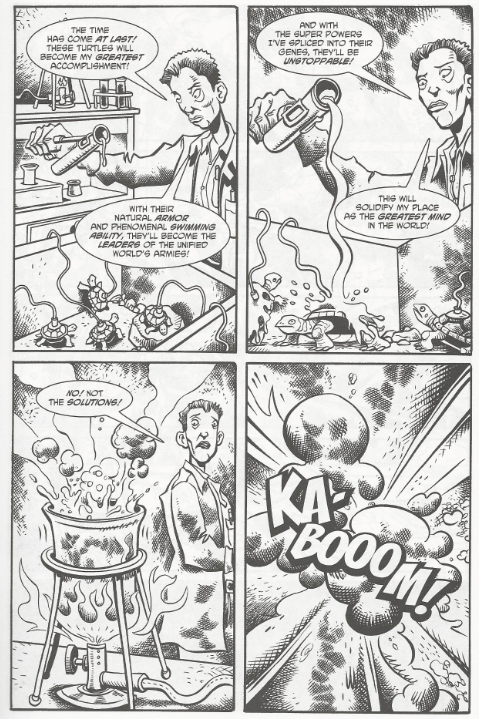 Once the Chairman and the assistants leave, Shreddarius returns to his secret project.  Fearing Lucks might betray him, he plans to mutate four turtles into super soldiers who will serve him.  Unfortunately, as he prepares the mutagen, there is an explosion.  As his horribly disfigured and injured body writhes on the floor, a rat skitters up to lick his wounds.

Time passes.  Doctor Shreddarius has taken on a new cybernetic body.  The rat, mutated into a martial arts master named Sliver, has pledged loyalty to Shreddarius and spent years training the four Super Turtles: Graviturtle (sub-leader who can control gravity), Blobboid (who can reform his body as a liquid), Griddex (made of organic rock and can change size), and Shellectro (who has electricity powers).  Shreddarius is pleased with their progress and eventually reveals them to Chairman Lucks (who has consolidated power and refuses to step down, despite the lack of an alien invasion).  The Super Turtles are set up in a Shell of Justice headquarters and spend their time battling rogue Terrorkinetics, dissenting mobs, and training with Sliver. 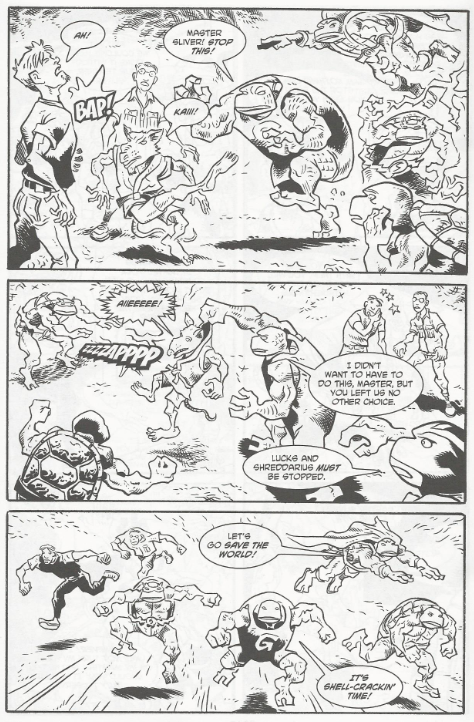 One day, they’re approached by Jonas Case and Neil O’Malley who have come to tell them the truth.  Apparently, Lucks and Shreddarius faked the alien invasion and manipulated world events to put themselves in a position of ultimate power.  The “rogue” Terrorkinetics were actually sent to fight the Super Turtles as a means to gauge their power in case they ever had to be taken down.  The Super Turtles are horrified by the truth, even more so when they learn that Sliver was in on it the whole time (his “training” having been more tests to try to find a limit to their power).  The Super Turtles defeat Sliver in battle and join Jonas and Neil. 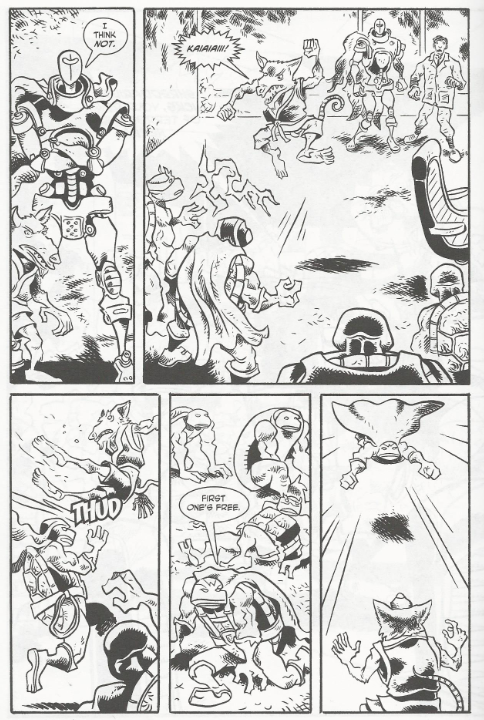 The Super Turtles infiltrate Lucks’s headquarters, taking down all the Terrorkinetics that stand in their way.  Sliver next opposes them, but they join forces and defeat him once more.  They take both Lucks and Sliver into custody, but Doctor Shreddarius has vanished.  Jonas and Neil then collect enough evidence on the premises to convict Lucks of his conspiracy.

Addressing the world, the Super Turtles vow to protect it from evil, but as defenders and not rulers.  As they promise to bring Doctor Shreddarius to justice, the villain watches from an unknown location and bides his time…

*The Super Turtles will battle Doctor Shreddarius and the Terrorkinetics next in TMNT (Vol. 4) #7 (which was actually their first appearance).

*The Super Turtles will have their climactic ultimate battle with Sliver in the 4Kids TMNT season 3 episode, “Reality Check”.

*The Super Turtles will also be (briefly) seen as part of the TMNT multiverse in the film “Turtles Forever”.

*This issue also featured a bonus pin-up, “A Young Leatherhead and Dr. X”, by Steve Lavigne and Ryan Brown.

Oh great, the Super Turtles.  I just… I dunno, man.  They really don’t do anything for me.  We’d gotten enough of the faux-Silver Age superhero stuff in the Justice Force characters, who had appeared in both the Mirage comics and the 4Kids cartoon.  I just didn’t need to see more of it in the form of the TMNT reimagined as corny Marvel-esque superheroes.

That said, they were pushed pretty hard for a little while.  First appearing in TMNT Volume 4, they got their own issue of Tales and their own episode of the 4Kids cartoon.  Strangely, they never got toys in the Playmates toyline.  For a company that was always trying to find new ways to justify variant Turtle toys, both on the shelves and in the show (the “Battle Nexus armor” that appeared for five seconds, the only-used-once jet packs, the extreme sports gear that got a full episode spotlight), I really don’t know how they overlooked this opportunity.  I just don’t understand Playmates, sometimes.

Anyhow, this issue moves at a mile a minute to set up the origin and facilitate a first battle with the two major super villains and the one generic crooked guy in a suit.  In that way, Jake Black actually channels the old Silver Age storytelling fairly well.  I mean, what was Spider-Man’s origin told in?  11 pages?  Those old Marvel comics were economical, man.

At 30 pages, perhaps Black’s script isn’t economical enough.  None of the Super Turtles get any sort of personality and you’re left to guess which one corresponds to which Ninja Turtle (or just watch the 4Kids episode and match the voices; it’s easier that way).  The big showdown is a big letdown, as the Super Turtles storm an office building (breaking through the dreaded CHAINLINK FENCE!!) and squash both the Terrorkinetics and Sliver in no time flat.  Shreddarius escapes without putting up a fight, but you get to see the big battle with him covered in TMNT (Vol. 4) #7.  The parting narrative box even tells you to follow the adventure in that issue, so I can let it go.

As for the political subtext, well, it's mostly forgotten now, but it was harping on something that was in the news in 2008.  There were... certain Americans in 2008 (paranoid conspiracy theorists) who were genuinely and vocally afraid that President George W. Bush would refuse to step down and allow another election.  They insisted that he'd use the war in Iraq to justify declaring "martial law" or "a state of emergency" and thus stay in power against the will of the people.  The 24 hour news networks didn't help, as they seldom do, and for a while in 2008 certain Americans were freaking the fuck out and promising the public that Bush was going to stay in the Oval Office illegally.

Then Obama was elected in 2008 and we never heard a peep about it again.

Chairman Lucks is obviously Jake Black's analogue for President Bush and the scenario of the story reflects those sensationalist fears exclusive to pre-November 2008.  There are other elements of commentary, such as Lucks faking the alien invasion (just like Bush "faked" the Al-Qaeda attacks, I guess?), Lucks sending the Terrorkinetics to other countries that would stand against his authority (just like Bush sent in troops to Iraq because they stood between him and oil or what the fuck ever), and Lucks being named, well, "Lucks" (as it was "luck" that got Bush into office?).

The very next issue of Tales of the TMNT, also written by Jake Black, would be another jab at Dubya, with a guy named the Decider (a nickname Bush had) trying to control the world, but inevitably turning out to be a delusional, stupid little man that can't handle responsibility or confrontation.  I don't think he ever got a name in that issue, but he may be the other-universe counterpart to Chairman Lucks (they both look the same, and by that I mean they both look like George W. Bush).

The Mirage staff were very, very vocal opponents of the George W. Bush administration and one cursory glance at the letters columns of Tales of the TMNT or TMNT Volume 4 should prove that to you.  Personally, I don't care what their political affiliation is and I didn't mind when they kept it to the letters columns, either.  Those were basically Laird's and Murphy's soapboxes for their political viewpoints, anyway.  But man, two issues in a row about how evil or stupid Bush is... That was just getting a little tiresome.

I guess they were trying to make a statement, but 6 years later it all just looks pretty foolish, doesn't it?  The whole idea that people were dead-certain Bush wouldn't relinquish the office of President?  And yet, here we are, two elections later, with no Bush in sight.  It casts an embarrassing light on this whole story that serves to distract, at least if you remember the sensationalist media of 2008.  And if you don't... Oh, how I envy you.

Anyway, I know the Super Turtles have their fans out there, but they just don’t interest me a whole heck of a lot.  The superhero aspect of the TMNT multiverse, be it as the Justice Force, Radical, Gadget Man or the insufferable Turtle Titan… It just does nothing for me.  There have been a LOT of TMNT comics over the years that try to “capture” the feel of a Silver Age Marvel comic, from Last of the Viking Heroes to TMNT (Vol. 1) #15, and by the time this issue came along I was just sort of bored with the whole exercise.

Grade: D+ (as in, “Dubya is still in power in some alternate universe out there where he refused to step down.  Just... not this universe”.)