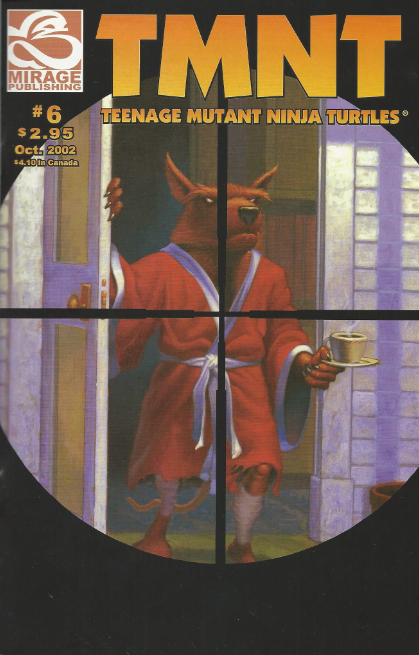 In the woods of Northampton, Jay sneaks up on Stainless Steve Steel’s farmhouse and spies on the front door with the scope of his hunting rifle.  He wants to finally see for himself who Shadow’s mysterious family is.  He catches a glimpse of Splinter on the porch and freaks out.  Suddenly, he’s attacked by Metalhead, who disarms him and proceeds to pursue him through the woods. 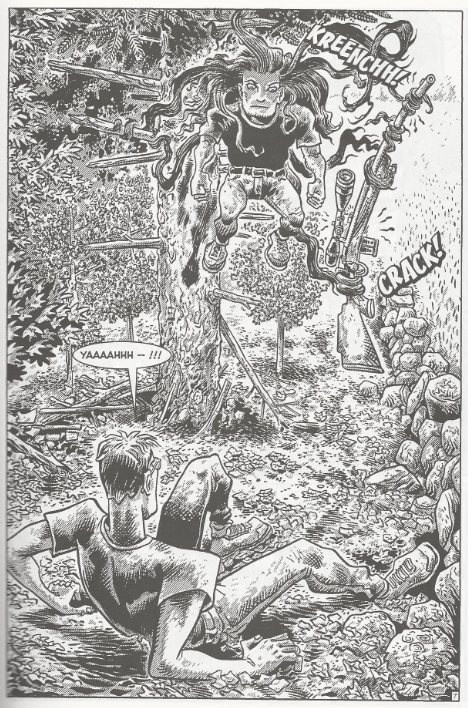 At the Utrom moon island, the Foot Clan demand that April surrender herself to their authority as security officers.  Casey won’t have it and proceeds to start a fight with the ninja.  Leo tries to diffuse the situation by talking to the captain of the Foot Soldiers, but he seems oddly confrontational.  The other Turtles, Shadow and even April join in the skirmish.  The Utroms finally intervene and stun everyone with a shudder bomb. 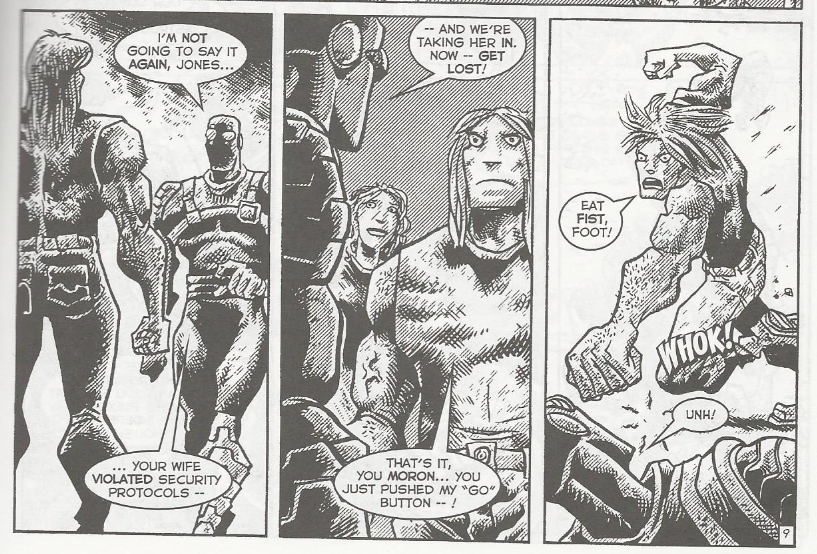 The Utroms apologize for the overzealous behavior of their contracted security, but insist that April must undergo testing as she set off their sensors.  They say that it is the best for both parties, as April appears to have “nanobots” on her person.  As the Utroms take April away, Donatello promises Casey that he’ll follow them to the lab and keep her company.  Casey reluctantly agrees and he, Shadow and the other Turtles go to the waiting room.

In the waiting room, the captain of the Foot Soldiers takes off his mask and is revealed to be Cha Ocho, someone whom both Leonardo and Raphael are familiar with.  Leo, in particular, has a grudge against Ocho.  Eventually, Professor Honeycutt and the Utrom Dr. Klynor enter and explain the situation. 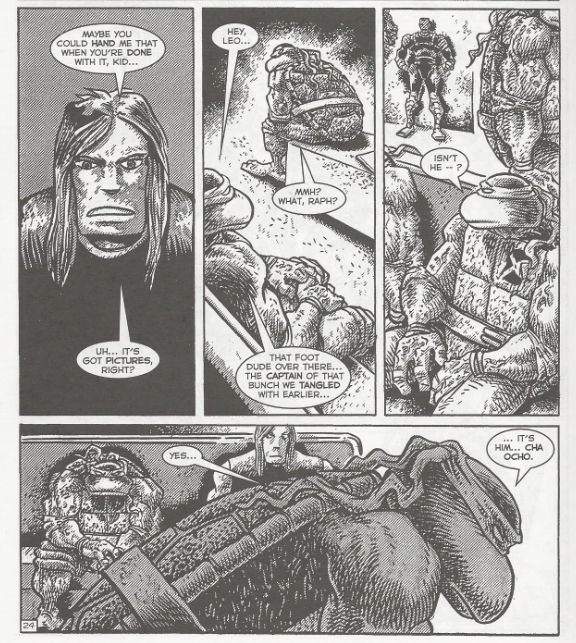 April isn’t just carrying nanobots, but is infected with them.  Klynor explains that while the Utroms were marooned on Earth and running the TCRI building as a front, one of their contracted human technicians stole a vile of nanobots and they were never able to pursue legal action due to the secretive nature of TCRI.  That technician was none other than Baxter Stockman.

The Turtles recall how Stockman, in his robot body, attacked April and injected her with a mysterious substance.  They fear he programmed the nanobots to do her serious harm and Casey thinks they may be what’s been keeping her from carrying a child.  As they discuss April’s dilemma, Ocho smiles mockingly with satisfaction at Leonardo. 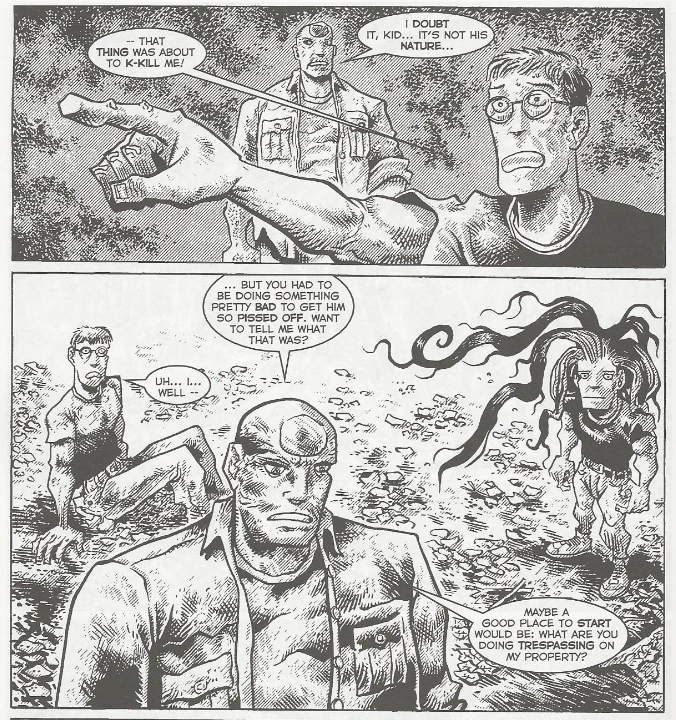 And in Northampton, Jay is saved by Stainless Steve Steel, who calls Metalhead off.  Jay thanks him, but Steve tells him not to gush too much.  Holding up the hunting rifle Metalhead took from him, Steve demands answers.

We’re entering that post "First Contact" era of Volume 4 and from this point on it’ll be harder to break the book up into arcs.  It’s very serialized and everything sort of runs at its own pace; none of the storylines begin and end concurrently for reader convenience.  Though the molasses pacing isn’t always to my pleasure, I’m perfectly okay with the individual character arcs not running alongside each other to begin and end in tandem.  Comics have gotten too “trade friendly” these days and it’s kind of nice to read a book that was written for monthly consumption and not to be collected later as chapters of a graphic novel.

Anyway, with that in mind, it becomes hard to discuss this book on an issue-by-issue basis BECAUSE it isn’t written that way.  From here on out, Volume 4 is all one big, long story and the issues blend together rather than feel individualistic.

But to talk about the beginnings of the arcs, this issue does get the ball rolling on a few.  April’s storyline is the most interesting she’s been in a long time, even if it mostly revolves around stuff happening TO her rather than her engaging in any proactive adventures.  She’s kind of like Peter Parker’s Aunt May in that way; whenever the writers can’t think of anything to make May relevant, they just give her another “relapse” and send her right back to the fucking hospital.

April is going to spend much of Volume 4 either in a hospital bed or weeping over the past.  While I don’t care for how a lot of that is going to turn out, and I don’t necessarily think “perpetual victim” is the best way to keep April relevant, I guess I’m just happy that I can actually TALK about Mirage April again.

This start to her arc and the gauntlet of shit she’s going to be put through is my favorite of her story progression through Volume 4.  It fulfills a plot thread left ominously dangling for 10 years (at that point) and the drama of the Turtles trying to save her life is pretty exciting.  This leg of her journey also wraps up in a timelier manner instead of being left to linger like the remainder of her story arc, so that helps.

There’s also the first appearance of Cha Ocho and brother, do they make a big deal about it.  His back story with Leo and Raph will be filled in through a couple issues of Tales of the TMNT, but from here on out he will proceed to do absolutely nothing of consequence whatsoever.  I’ve harped on this before and I don’t particularly want to repeat myself, but it’s just sort of embarrassing.  Laird builds him up as the next big thing and he does all of jack shit.

Then there’s Jay!  Yeah.  That guy.  I dunno if Laird had any big plans for him, but he isn’t going to develop as a character, either on his own or as a love interest for Shadow.  His sequence here was more to showcase Metalhead and Stainless Steve Steel, both of whom were making their comebacks after languishing in Mirage obscurity for decades.  It was cool to see Metalhead in action, and treated like a horror movie monster, no less.

There’s a fun bit in the middle of the book, while all the characters are in the waiting room.  Shadow spends the time reading the first piece of Utrom literature to get translated and published on Earth and even Casey is interested in checking it out (for the pictures).  While it isn’t subtle world-building (none of the clumsy “captioned” dialogue in Volume 4 is subtle), it does show in a small way how the world has changed since First Contact.  We just saw the “big” event on a global scale, but now we’re also seeing how piddly little things like books and entertainment media from other planets are trickling into Earth culture.  It was a neat thing, but that’s about it.

Overall, I’m debating whether or not I should give individual issues grades for Volume 4.  It just isn’t that kind of book.  It reads at a methodical but relaxed pace and it rarely elicits excitement or loathing except in rare bursts.  It’d be kind of like grading individual strips of Dick Tracy or other serialized spoon-feeding comics.  If I do it that way, most of these grades are probably going to just linger at a C or something.