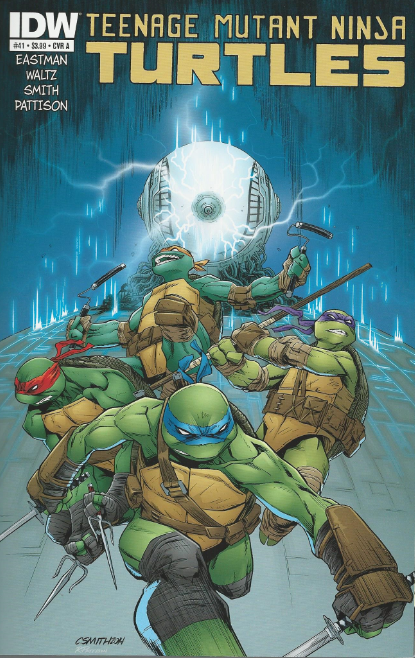 “Attack on Technodrome, Part One”

On Burnow Island, General Krang orders Baxter Stockman and the Fugitoid to activate the Technodrome’s terraforming eye.  They reluctantly commence with the test and Krang is pleased with what he sees.  Stockman and the Fugitoid are worried, as Krang has sped up the Technodrome project ever since his encounter with the Shredder and the human race is running out of time. 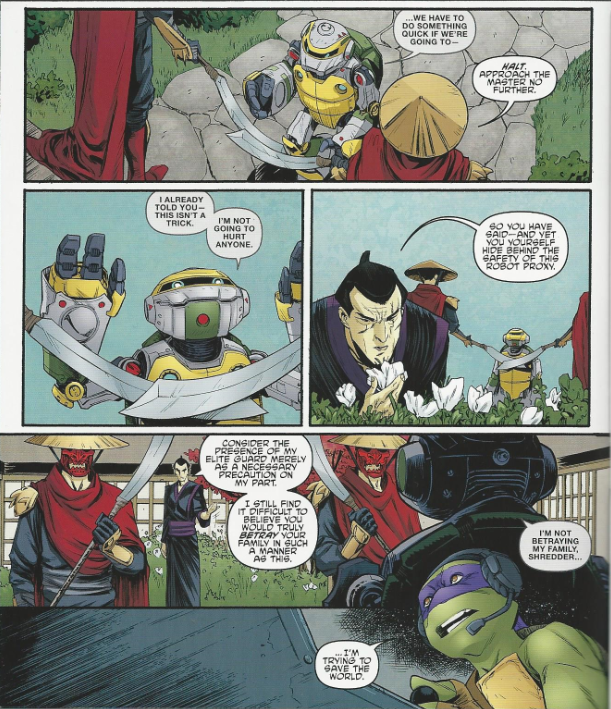 At Foot HQ, Donatello-via-Metalhead convenes with the Shredder (who is flanked by his Elite Guard) to continue solidifying their alliance against Krang.  He tells the Shredder he has technology that can get their united forces onto Burnow Island undetected.  Shredder agrees to the alliance, knowing that he and Hamato Yoshi will return to being adversaries once Krang is out of the picture, and Metalhead transforms and rolls out.

At Harold’s lab, Donatello puts Metalhead on autopilot and joins Harold in putting the finishing touches on the teleporter. 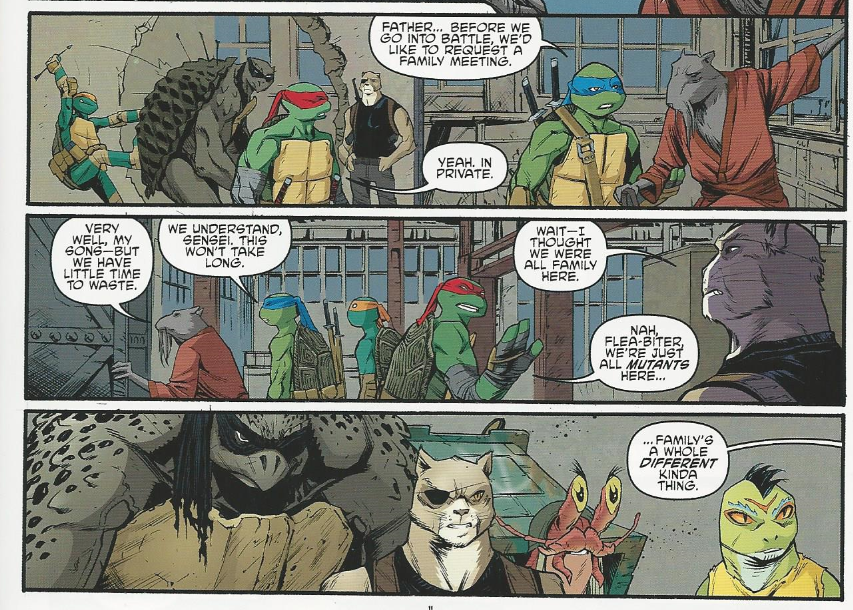 At Mutanimal HQ, the Turtles, Slash, Mondo and Herman complete a training run together.  When that’s done, the Turtles and Splinter leave for a private chat, which irritates Hob.

At the Second Time Around shop, April and Casey talk about how the Turtles have been keeping them out of the loop, but that they’d like to help anyway.  April says she’s seen Dr. Miller around campus and thinks she can get some more info out of him.  After she leaves for class, Casey dons his hockey mask and leaves to patrol the neighborhood.

And back at Harold’s lab, Harold thinks he’s worked out the bugs since the “ghost guy” incident and sends Donatello through the teleporter on a test run.  Don returns from Paris with an Eiffel Tower souvenir, proving the machine works.  He then relates this success to the Foot, letting them know it’s time to act. 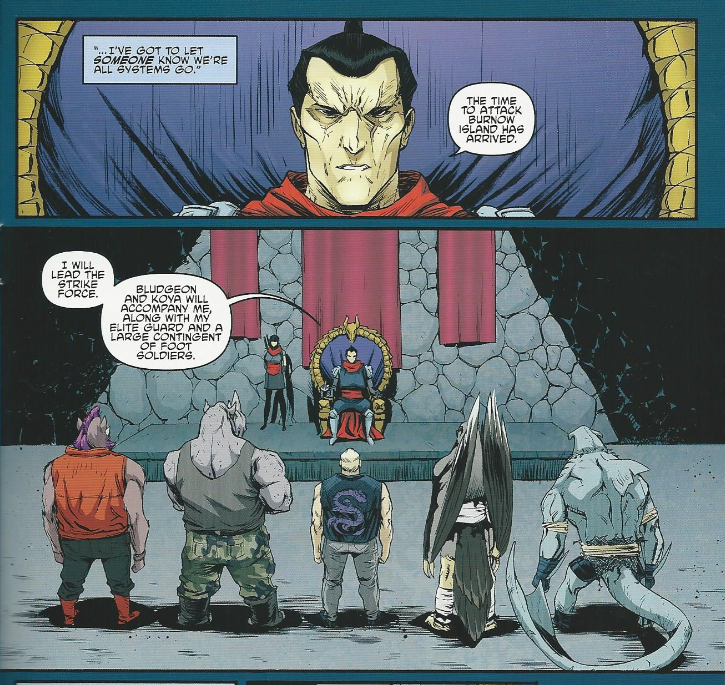 At Foot HQ, the Shredder calls a meeting with his top forces: Karai, Bebop, Rocksteady, Hun, Koya and Bludgeon.  He orders Koya and Bludgeon to accompany him in the assault on Burnow Island, tells Hun to stay behind and keep guard over New York, and gives Bebop and Rocksteady a secret mission.  Once the rest leave, Karai asks Shredder if its wise to trust Hamato Yoshi’s clan.  Shredder is well aware that they will remain enemies, but sees them as a means to an end. 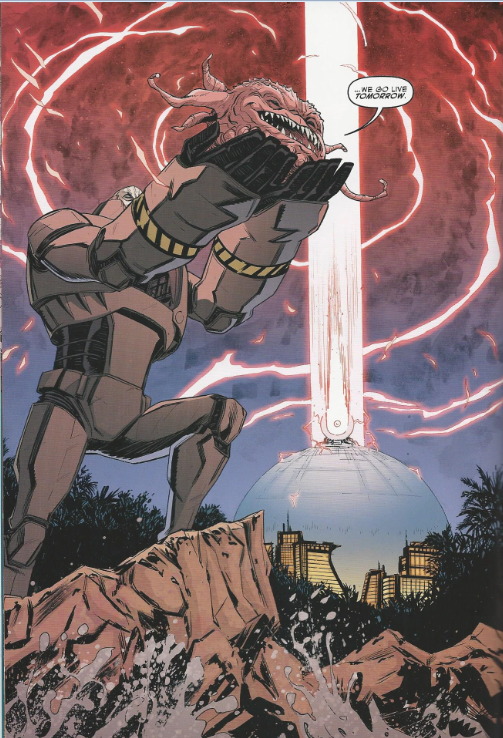 Back on Burnow Island, Stockman is worried that once the Technodrome wipes out the human race, he won’t be around much longer, either.  With no other choice, the Fugitoid decides to tell him about the plan he’s been orchestrating.  Outside, Krang leaves his robot body and traverses the landscape which has been successfully terraformed to match the environment of Utrominon.  Triumphantly, he informs his technicians that they will begin creating "New Utrominon" tomorrow.

*Krang stepped up the Technodrome project after his encounter with the Shredder in TMNT (IDW) #37.

*Baxter and the Fugitoid formed their uneasy alliance in TMNT: Utrom Empire #3.

*The “ghost guys” Donatello mentions are the Ghostbusters, whom the Turtles met in the TMNT/Ghostbusters miniseries.

*This issue was originally published with 3 variant covers: Cover A by Smith and Pattison, Cover B by Eastman and Pattison, and Cover RI by Tim Doyle.

Forty issues ago, we saw the mysterious General Krang shake his mighty fist and we were all left wondering just where things were going to go with that guy.  Well, it sure took a while, but we’re finally there.

The Technodrome project has been simmering for a while.  It was first referenced in TMNT Micro-Series #8: Fugitoid and that issue was published over two years ago.  Heck, the Fugitoid was kidnapped by Krang twenty-one issues ago and has been laboring on the project ever since.  This is some slow-burning stuff.

But damn if it didn’t feel rewarding when Krang lit up that giant eyeball and all our patience was finally rewarded.  You sort of empathize with Krang, as it feels like we’ve been waiting for thousands of years to see this happen, too.

If you can’t tell from the summary, this issue basically plays ping pong with the whole cast and we’re constantly bouncing back and forth from one sub plot to another at two-to-four page increments.  It sort of reminds me of Laird’s TMNT Volume 4, with how things slowed down to a crawl because the narrative was being pulled in eight different directions and four pages per issue isn’t enough space to move ANY storyline along.  The good news is that all the arcs are clearly on a collision course for one another and sooner or later we’re going to see everything intersect.  Since this storyline is titled “Attack on Technodrome” and every subplot is revolving around the attack on the Technodrome, I can only assume it’s going to be “sooner” rather than “later”.

I do hope that once all this is over and done with, the pacing of the book can get a little cleaner, offering larger chunks of page space to characters and storylines instead of dolling things out in these three-pages-a-month snippets.  I wouldn’t say it’s tedious reading, and I AM looking forward to seeing all these subplots collide head on, but it’s not something I’d like to see go on forever.

We get our first look at IDW’s interpretation of the Elite Guard with this issue, unless I’m forgetting a prior appearance, and they’re much how you’d expect them to be.  The biggest addition comes in the form of the red oni masks, which are a nice touch even if I preferred the wrappings over the mouths.  Hey, just as long as the sweet hats are still there, that’s all that really matters.

And, jeez, Dr. Miller.  That guy.  It’s been TWENTY issues since we’ve seen or heard from him.  Secret History of the Foot Clan was one of the best storylines IDW ever put out, so I’m looking forward to seeing where they go with him (though I fear it’ll pull the narrative in yet another direction).

There were strong character moments littered throughout the issue, even if they were small.  I almost forgot Karai even existed in this title; she hasn’t been relevant in quite some time.  Bebop and Rocksteady continue to be great.  Hell, I loved the whole “Foot Clan high command” assembly in general; it’s a thrill to see all these diverse and colorful characters gathered together for the first time.

There may be rifts forming between the Turtles and the Mutanimals, who didn’t seem to like being left out of the Turtles’ and Splinter’s powwow.  And it does raise a good question about what will become of all these alliances once Krang is dealt with.  We know the Foot and the Turtles won’t stay chummy (Shredder says as much to Karai), but what about the Turtles and the Mutanimals?  I doubt the TMNT are too keen on mutants waging war on humanity, and likewise, I doubt Hob wants to be pals with humans-reincarnated-as-mutants.  That one little panel of Hob and co. staring daggers at the Turtles functioned as a buzzkilling reminder of where the two teams really stand.

Anyhow, I’m glad to see all these arcs coming to a head and this four-issue storyline ought to be some major payoff.  But man if it wasn’t the long road getting there, you know what I mean?

Grade: B (as in, “By the way, this Cory Smith guy is back and he’s pretty damn good.  If we could stick to rotating between him and Santolouco from now on, this’ll be the best-looking book on the shelf”.)