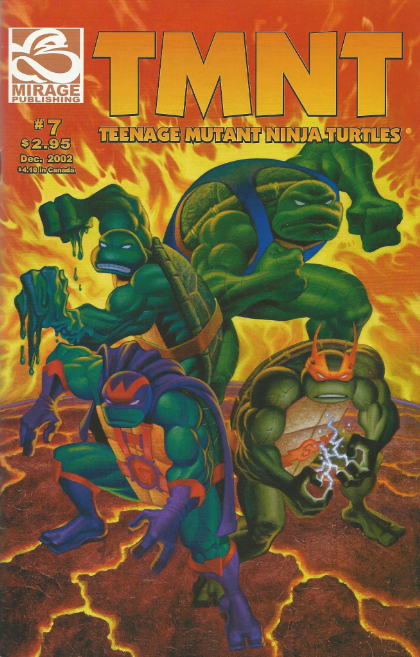 Somewhere, the Super Turtles (Graviturtle, Shellectro, Blobboid and Griddex) are being faced down by their ultimate foes: Doctor Shreddarius and the Terrorkinetics (Slaythereen, Gnet Gnet, Frisbat, K’Nign, and Armorgga).  An all-out brawl ensues, but ultimately the Super Turtles triumph.  Their leader, Graviturtle, is still unsatisfied, as he fears that someone unfathomably far away is watching them in secret. 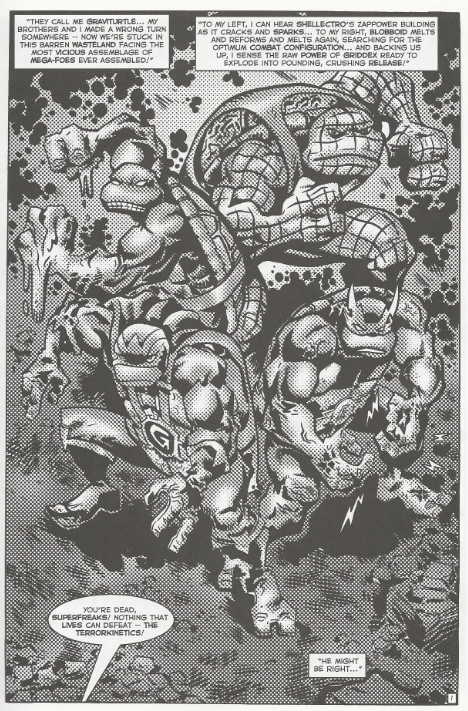 At the Utrom moon island, an Utrom scientist is observing their entire battle through a strange viewing device.  The Fugitoid and Donatello walk by his lab and Don asks who he is.  The Fugitoid introduces him as Glurin, a young researcher who is using transmat time-space warping technology to try and pierce the boundaries between dimensions.

They return to April’s room where she’s apparently slipped into a coma.  Casey and Raph watch over her, with Casey calling Robyn on the phone and arranging a time to pick her up at the airport.  Dr. Klynor explains that when they scanned the nanobots, it woke them from their dormancy and they began attacking her body, hence April’s sudden decline in health.  They haven’t been able to determine if the nanobots have been causing her infertility all these years, though. 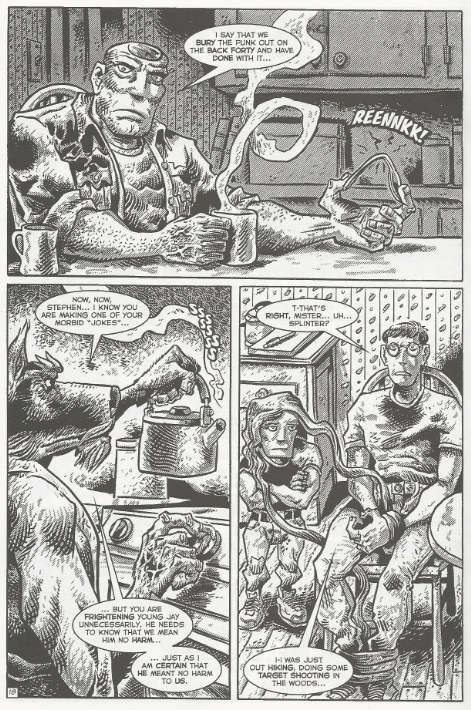 At the farmhouse, Metalhead keeps Jay docile while Splinter and Steve discuss what to do with him.  Splinter believes Jay’s story, that he was just trying to sneak a peek at Shadow’s mysterious family, but Steve is more suspicious thanks to Jay sneaking that peek with the scope of his hunting rifle.  Steve leaves to make a call while Splinter has Metalhead release Jay so he can tell him why Shadow’s “grandfather” is a giant rat. 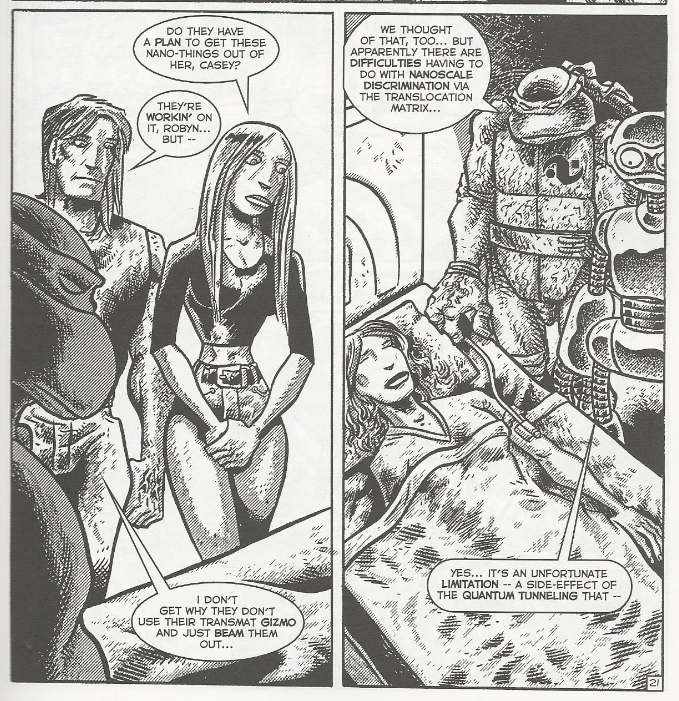 Robyn arrives at the moon island and is given a bio scan to be sure that she’s suitable for organ and tissue donations if it comes to that.  Raph suggests the Utroms just use the transmat to beam the nanobots out of April’s system, but unfortunately the device can’t operate reliably on that scale.  Eventually, Dr. Klynor comes in with the results of Robyn’s bio scan.  He has shocking news…

April and Robyn are not biological sisters.

*Glurin will succeed in his endeavor to cross dimensional boundaries in Tales of the TMNT (Vol. 2) #17.

*Speaking of Glurin, Donatello’s unfamiliarity with him creates a bit of discontinuity with Tales of the TMNT (Vol. 2) #18.  That story, a team-up between Don and Glurin, uses a hard date placing it during the six month time gap in TMNT (Vol. 4) #5.  Either the date in Tales #18 is incorrect and it takes place later in Volume 4, or Don just didn’t recognize Glurin in this issue because all Utroms look the same or whatever.

*Robyn O’Neil last appeared in TMNT (Vol. 1) #59.  This issue is actually the first time we ever see her interact with the Turtles, though she's already aware of their existence.  From the letters page of TMNT (Vol. 4) #9, Laird stated: "The story of how, why and when Robyn met the TMNT will be told at some point -- most likely in Tales of the TMNT".  Despite that assurance, the tale was never told.

*This issue also featured an editorial letter from Mirage CEO Gary Richardson (discussing the upcoming merchandising based on the 4Kids cartoon) and 2 pages of Super Turtle sketches by Peter Laird (originally completed in 1993).

*According to Laird’s notes, the Super Turtles came about as an idea for an issue where the Ninja Turtles would gain super powers (rather than being alternate universe incarnations of the TMNT).  Their original names were Captain Gravity (Graviturtle), Electroboy (Shellectro), Mr. Blob (Blobboid), and Grid (Griddex).  You'll notice that throughout the interior pages, Shellectro has an "E" on his belt buckle instead of an "S".  Whoops!

Hey, only two dueling plot threads in this issue!  That’s a luxury for TMNT Volume 4, so savor it while you can.

Jay’s story arc doesn’t really go anywhere (at least not for him, anyway), so I’m not too inclined to discuss it.  Stainless Steve Steel being a grouchy jerk seemed a little out of the ordinary for him, but then, we don’t really know the character all that well.  Over 15 years of time has passed in their universe since we last got a substantial feel for the guy, so I guess people change.

There are plot threads aplenty in this issue, though.  Robyn is dredged up from oblivion to do mostly nothing but serve as a plot device for April’s upcoming identity quest.  Actually, that’s kind of all Robyn’s ever been good for, isn’t it?  During “City at War” she spontaneously came into existence so April could have a place to go during that particular identity search.  Now she’s back to act as a catalyst for much the same thing.  Robyn’s not really much of her own character, is she?

Glurin makes his first appearance and his development of interdimensional technology would sprout quite a few Tales of the TMNT Volume 2 stories.  As mentioned in the Turtle Tips section, Don not recognizing Glurin is something of a continuity flub with “The Blue Hole” (though to be fair, it was that later story which messed up).  Don and Glurin are shown to already be buddies in that story, but it has to take place during the time skip in TMNT (Vol. 4) #5 because it uses the hard date of March, 2002.  With Volume 4 being stuck taking place after January of 2002, there’s no way around this one.

He also peeks in on the Super Turtles, who will go on to make a few appearances in both the comics and the 4Kids cartoon.  Never cared for them all that much, but as a surprising gag to open the issue they were an enjoyable diversion.  They work in that capacity, just not as characters capable of carrying full narratives.

I’m kind of chomping at the bit, because I really DO want to talk about April’s troubles during Volume 4, but we just aren’t there yet so I’ll have to bide my time.  I don’t want to get ahead of myself.

I will say that I enjoyed much of the banter between Don, Fugitoid and Klynor in this issue as they soberly discuss April’s condition.  They liken the nanobots activating upon being scanned to the "Heisenberg Uncertainty Principle", which you all probably remember from high school physics classes.  I passed mine on what can only be charitably described as a miracle, but I think the popular dumbed down summary is that “the act of observing an experiment changes its outcome”.  Wasn't that the "Hawthorne Effect"?  Jeez, I don't know, but it actually ties into the opening with the Super Turtles, as they mention that they feel like they’re being watched, which changes their behavior as they react to their paranoia.

So when you read into all that’s going on, the Super Turtles weren’t really all that random.  But I still don’t like em.