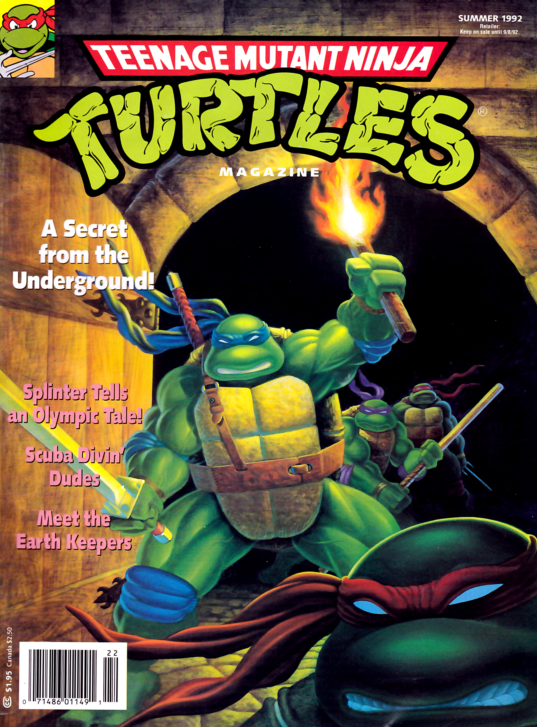 “A Knight in the Sewer”

The Turtles are walking down a familiar sewer tunnel when suddenly they see an old wooden doorway appear before them.  There is an inscription that reads, “Do not enter.  The king who was and will be again rests within.”  Raphael, being ever curious, forces the door in so they can see what’s inside. 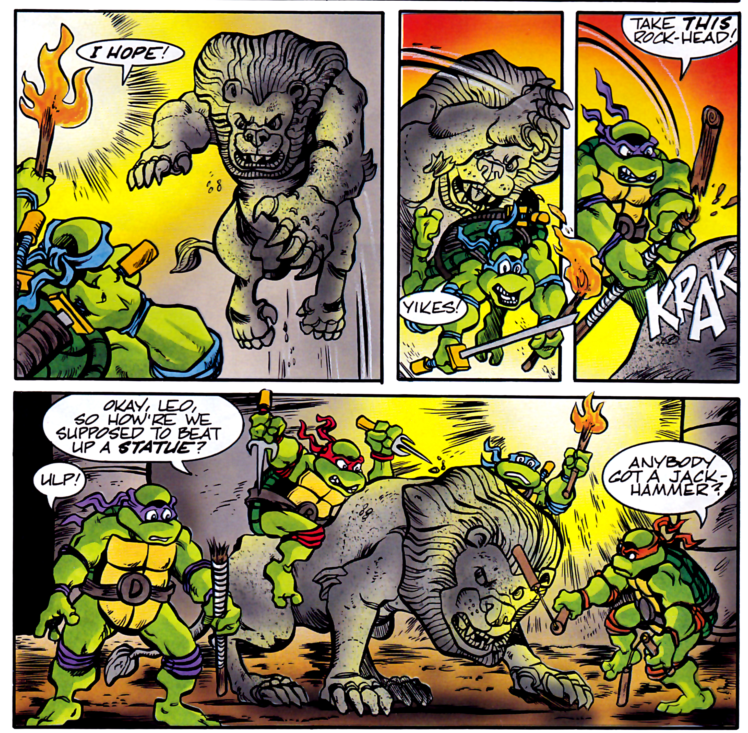 Leo grabs a lit torch off the wall and they all start to notice how medieval everything looks.  They come across a stone lion which suddenly springs to life and attacks.  The Turtles fight back, but their weapons can’t scratch it.

A knight in shining armor then appears and bids the unseen presence of Merlin to calm the lion.  The knight apologizes to the Turtles, recognizing their valor and pure heartedness.  He says that he doesn’t know how they entered his medieval realm, but he’ll use the magic of his sword to send them home. 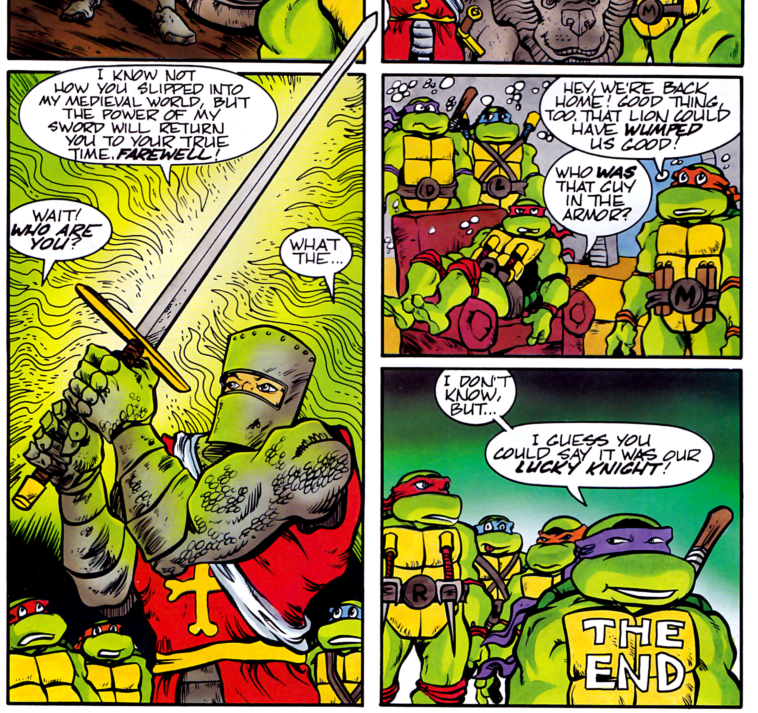 The Turtles suddenly reappear in the lair.  Raphael wonders who the guy in armor was, leaving Donatello to suggest it was their “lucky knight”.

Hey, a story written by Michael Dooney?  Now there’s a rarity.  I don’t think Dooney ever wrote a story he didn’t also draw.  I wonder how this opportunity popped up?

Anyway, it fits in with most of the other comics in this magazine, being short and full of puns.  I’m actually a little surprised this story didn’t segue into an appearance from King Lionheart, a character from the 1991 Playmates action figure line.  Hey, with Hothead, Ray Fillet and Sgt. Bananas already having appeared in this comic, can you blame me for assuming that a story themed around lions and medieval knights would feature a medieval lion-knight from the toyline? 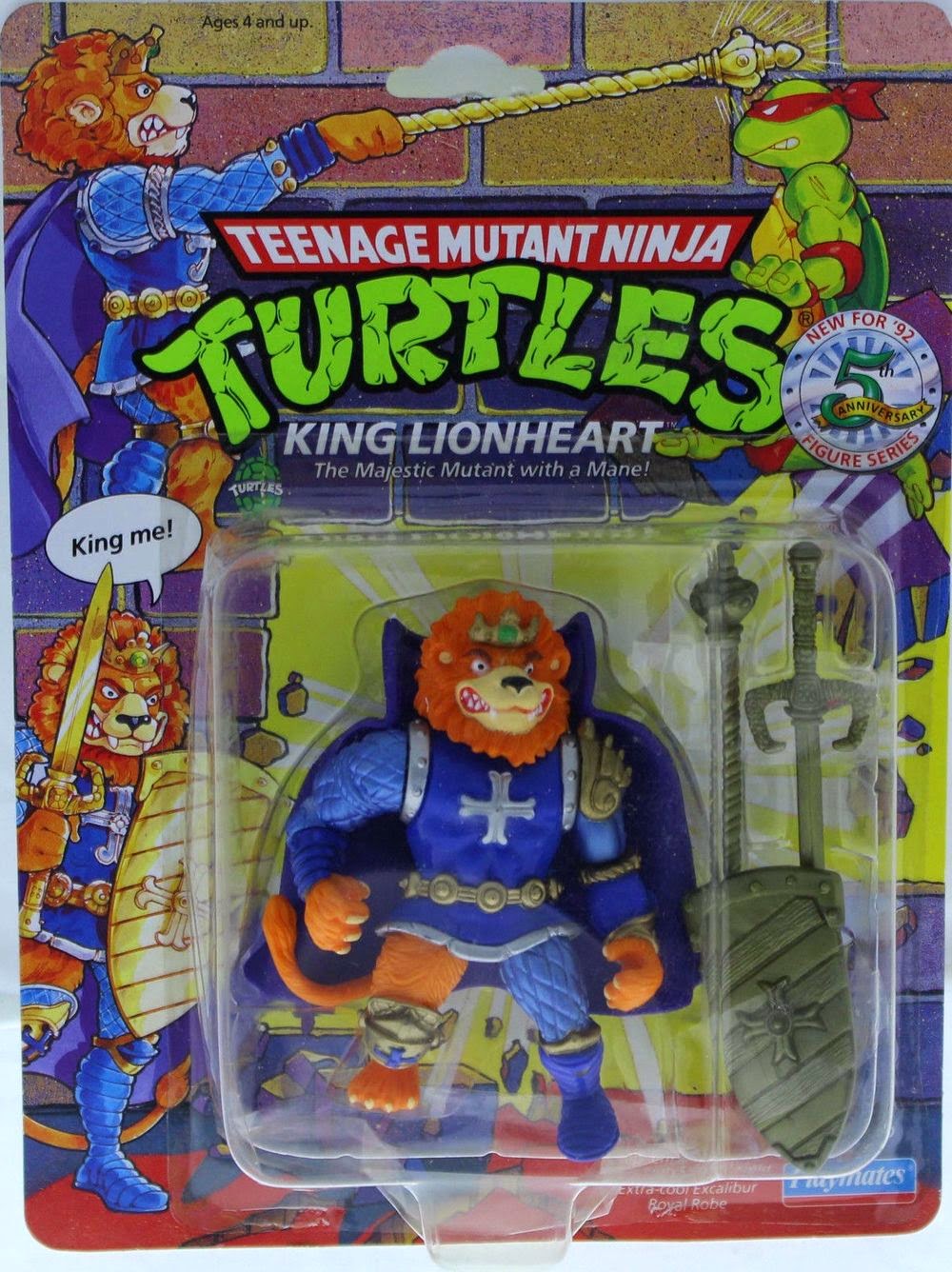 The knight with the magic sword resting in the king’s tomb and yammering about Merlin… I think we can all put together who he’s supposed to be.  It would actually be pretty amusing to think that the great King Arthur came back from the grave only to get mutated into a silly-looking lion-guy.  King Lionheart’s toy bio says he was just a Shakespearian actor whom the Shredder mutated, but it DID say that he wielded the blade “Extra-cool Excalibur” and referred to him as the “King Arthur of the city sewers” so there may be a little leeway.

Anyhow, a fun 4-pager but not much else to say about it.