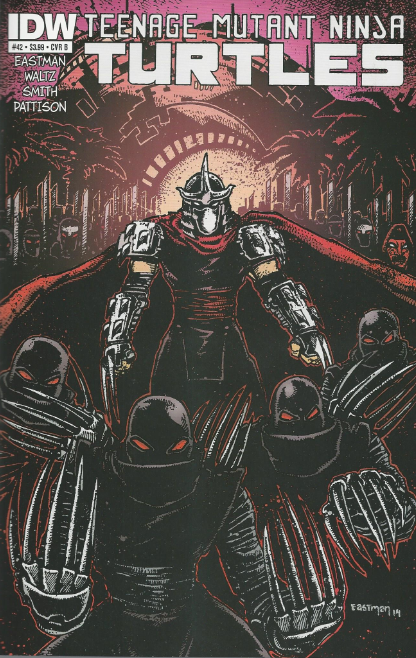 In Old Hob’s bunker, Leonardo breaks the news to the cat that he and his brothers will not be joining them for their attack on the Foot.  Hob isn’t happy, but Splinter vows to stay by his side and fulfill his end of the bargain.  However, even though his sons won’t be with them, they will still be helping them. 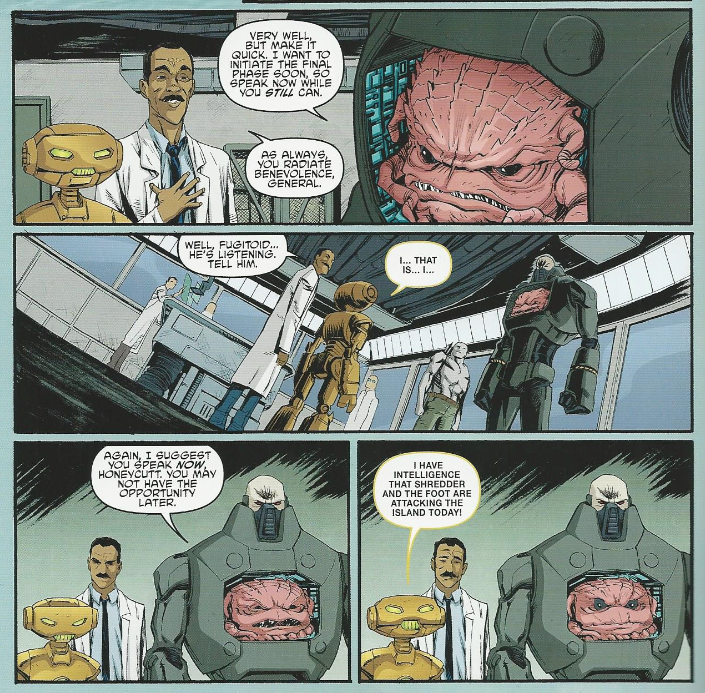 On Burnow Island, the Fugitoid comes to General Krang with the news that Shredder and the Foot will be attacking the Technodrome.  Krang is furious and demands to know the Fugitoid’s sources, but the robot refuses to give them up, claiming that Krang wouldn’t dare destroy him because he’s so important to the project.

Baxter Stockman then betrays his alliance with the Fugitoid and reveals that he’s been spying on him all this time with a miniature Flyborg.  He offers to tell Krang the whole story in exchange for an un-terraformed sanctuary on New Utrominon.  Krang concedes and Stockman tells him the whole yarn about the Fugitoid contacting the Turtles and delivering teleportal blueprints to them.  He also tells him that the Turtles will be attacking the Technodrome in addition to Shredder.  Krang rewards Stockman by having him thrown in the brig along with the Fugitoid.

At Harold’s lab, Donatello is setting the coordinates for Burnow Island.  For safety, Harold is operating Metalhead from a remote location.  Don informs his brothers that he can’t go with them to Burnow Island because he has to stay behind and work the portal with Harold/Metalhead.  Leo understands and the Turtles leave through the portal. 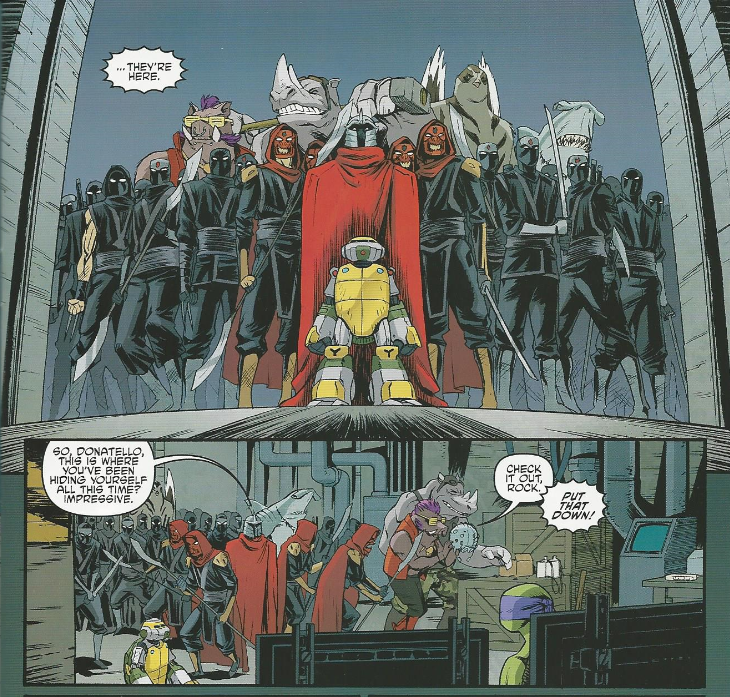 Moments later, Don lets the Shredder and his forces into the lab.  He opens the portal for him, but as insurance against treachery, Shredder leaves Bebop and Rocksteady behind to watch Don.

Elsewhere, Dr. Miller returns to his office to find April waiting for him.  She says that they risked their lives to save him from the Foot, only to be betrayed, and that he owes them for that.  Dr. Miller says that he still believes that saving the “Ashi no Himitsu” (“Secret of the Foot”) was the right decision, but admits that he’s now in way over his head with a criminal organization.  He says that if April and her friends can get him out of it, he will gladly help them in whatever way possible.

Outside Foot HQ, Hob’s gang and Splinter ready themselves to fight.  Splinter recalls a powwow with his sons from a few hours earlier…

Down in the lair, Leo, Raph and Mike come to Splinter to tell him that there’s been a change of plans.  Leo had an epiphany about turning Krang and Shredder against each other and went to Donnie to try and concoct a way of planting a double-agent in the Foot.  Don came up with the whole “betraying his family for the greater good” act and began diplomatic discussions with the Shredder via Metalhead.  The idea was that the Foot and Krang’s army would be so busy fighting each other that it would leave the Technodrome unguarded, allowing the Turtles to get at it.  And with any luck, the two despots would destroy each other in the chaos.  Splinter asks why they kept this plan from him and they explain that he was so hung up on revenge against Shredder that they feared he wouldn’t give their plan a chance.  Splinter concedes that they were right and that he’d been blind this whole time. 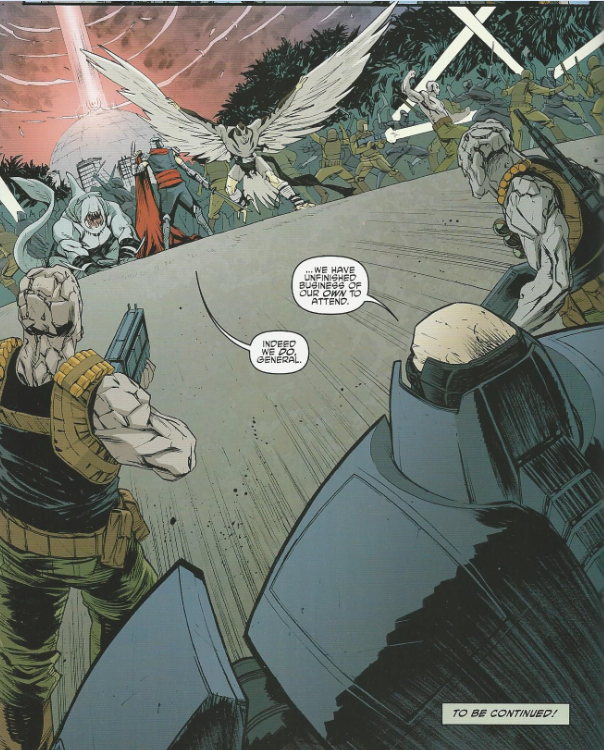 The present.  Shredder and the Foot arrive on Burnow Island only to be greeted by General Krang and his army of human and Rock Soldiers.  The two forces clash while Shredder, Koya and Bludgeon take on Krang, Tragg and Granitor.

*Leo came up with his plan to turn Shredder and Krang against each other (with a little help from the Rat King) in TMNT (IDW) #36.

*This issue was originally published with 3 variant covers: Cover A by Cory Smith, Cover B by Eastman and Pattison, and Cover RI by Brian Churilla.

I’ll admit that I hadn’t put all of it together, myself.  I wasn’t sure if Donatello’s appealing to Shredder for help was part of the big plan (which it was) or if he was actually betraying his family (which he wasn’t).  While the fact that it was all part of Leo’s scheme did sort of hit me as a surprise, part of that is because the script cheated so much.

I mean, look at pages 8 through 10.  It’s Donatello and his brothers in private, yet they’re still acting like they aren’t aware of Don’s “betrayal”.  Who are they putting this show on for?  Harold?  If so, then why is he being kept out of the loop?

The “Don was in on it all along” reveal only works for as long as it takes the reader to say, “Hey, wait a minute…”

That being said, I suppose I’m happy that Don DIDN’T betray his family.  We just got done with a “Turtle goes to the side of the Foot” story arc and its tiresome aftermath; we really didn’t need to travel down that road again so soon.  But while there won’t be any fallout for Don between him and his family, Don still looks to be in a tight spot with Bebop and Rocksteady watching over him.  So there’s likely to be some sort of comeuppance on the horizon (evidently, the next story arc is called "Vengeance" so you figure it out).

And with all this “whose betraying who?” stuff going on, you’re left questioning everything you see.  Did Baxter REALLY betray the Fugitoid?  Or next issue will there be a “It was all part of the plan!” monologue?  Is Dr. Miller REALLY genuine about wanting to get out of the Foot?  Or is he just playing April?  I hope we don't have too many more "Aha!  FOOLED YOU!" moments waiting for us in the immediate future.  I think I’ve had my fill of that.

It looks like this first half of the “Attack on Technodrome” arc has been all the laborious setup (even though, let’s be real, the way this comic is written the past 40 issues have all been setup).  With that in mind, hopefully the next half will be more action oriented and less indulgent with exposition and monologues.  I understand that this is one of those comics that’s “written for the trade” so the intention is that you’ll be reading the whole thing together in a paperback, but man, this book can be a real grind for those of us who invest in the floppies.

If anything, you’d think after 40+ issues, the three (!) plotters would find a better way to distribute the exposition between the action for more balanced arcs instead of front-loading quite so much.