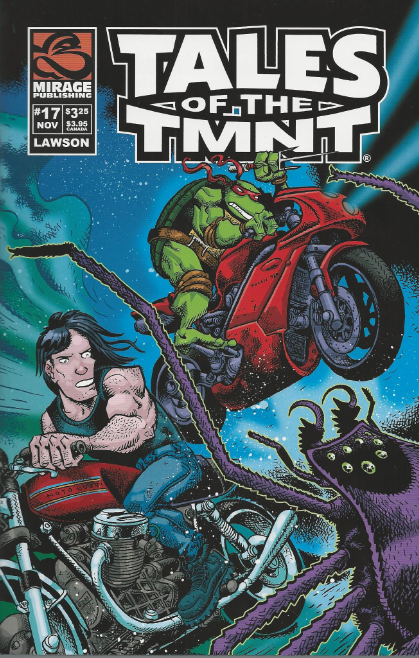 Frontispiece: Raphael marches through some snow-covered ruins, unaware that giant spider legs are skittering out from a tunnel above him.  Raph thinks about how the phrase “insects make my skin crawl” has lost all meaning, but thinks it’s worth a reevaluation once you put the qualifier “giant” at the beginning…

Splinter’s funeral is over and Raph, Casey and Glurin have congregated at a bar to raise a toast to the old rat.  As they all gradually get more and more inebriated (cranberry juice is apparently like booze to Utroms), Casey manages to convince Glurin to let them test his experimental Dimensional Gridshift Unit. 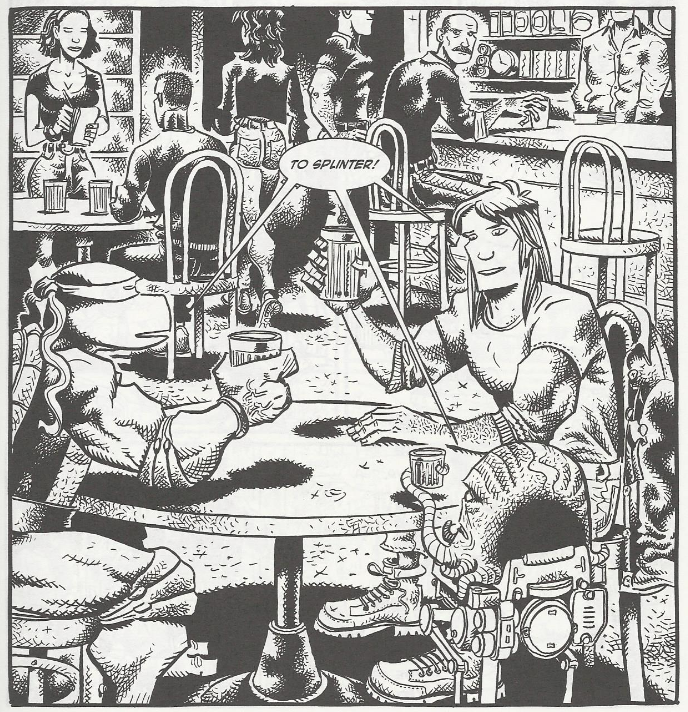 They return to the moon island and find Don trying to keep himself busy with work.  Don sees that they’re all drunk and decides to come along on the trip to keep them safe.  Glurin calculates the safest alternate reality, EST 14, and sends them through the portal.  Immediately upon doing so, he notices something wrong and chokes.

The Turtles and Casey arrive on a desert highway filled with abandoned vehicles.  Casey finds a customized Jeep loaded with assault weapons as well as two motorcycles.  He suggests they investigate beyond a nearby mountain ridge and see what went down in this universe.

They’re immediately attacked by giant spiders but manage to blow them away with the assault rifles.  They find an injured woman and try to help her.  She comes to and explains that after global warming destroyed all the farmland in America, the government tried to solve the food shortage with the “Arthro Project”.  They lost control of the experiment, though, and the giant insects and arachnids are the result.  The woman begins to scream and convulse and a larvae crawls out of her brain.  Raph kills it and the trio moves on. 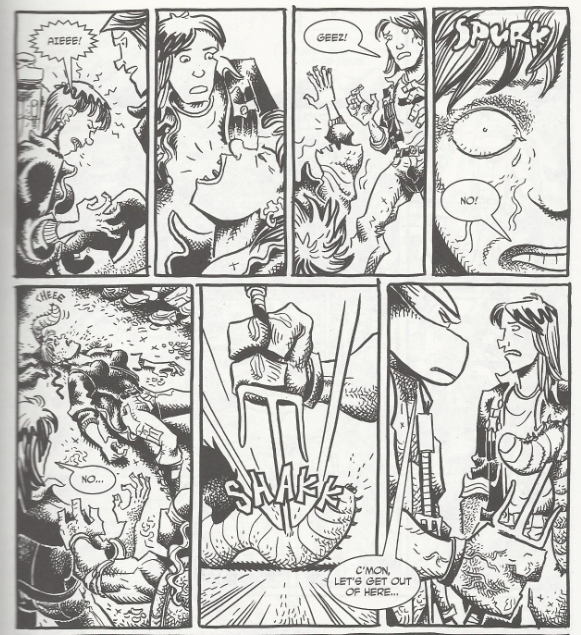 Eventually, they come upon the ruins of Las Vegas.  Suddenly, all their heads throb from a psychic attack.  Don recognizes it as the work of the insect Queen who is sending sentries to attack them.  Giant flying cockroaches them swoop down, but they’re too armored for the guns to do any good.  Don and Raph escape into the sewers, but Casey is carried off.  Don says that when the Queen psychically attacked them, he saw images of the Luxor and assumes that’s where Casey has been taken.  But first, they need to stop by a pet store.

Later, Don and Raph make their way through the sewers with Don using a wrench to open certain pipes along the way.  They arrive at the Luxor and fight their way up to the top floor where Casey and several other human survivors have been sealed into a wall with insect wax.  They free the people just as the insect Queen, a giant mantis, attacks them.  They all start to get woozy and Don opens his package from the pet store: A canary.  The canary is dead, meaning the gas lines he opened have now filled the building. 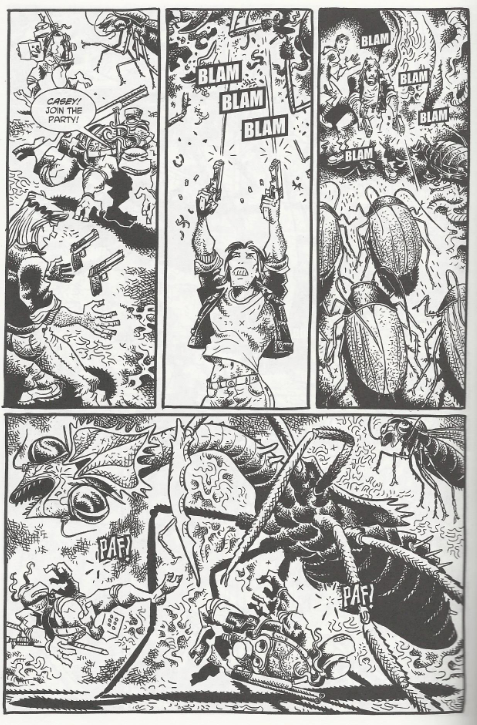 The trio escapes through the glass ceiling of the Luxor while the last human survivor stays behind to light a match and ignite the gas.  The Turtles and Casey make it to the ground and avoid being blow up, but they’re immediately attacked by Sigfried and Roy’s Siberian tigers.

Before the tigers can shred them, Glurin pulls them back through the portal.  He rather embarrassedly explains that a cockroach crawled into the Gridshift Unit and defecated on a circuit, thereby sending the trio to an unknown destination.  It took him until now to find them and bring them back.  Angry, Casey squishes the cockroach with his thumb.

*Glurin’s Dimensional Gridshift Unit will reappear in Tales of the TMNT (Vol. 2) #52.

*The dimension the Turtles and Casey go to may not be another dimension at all, but the future.  Tales of the TMNT (Vol. 2) #69 establishes that the world was left in ruins by global warming and shows strange, giant monsters lurking around everywhere.

I remember not digging this issue when it first came out.  It’s just an adventure story, playing off a lot of tired action movie tropes and doesn’t have much substance to it.  It wants to pay homage to action movie clichés, but they’re just a string of predictable, boring scenarios we’ve all seen a hundred times.

Rereading it for the first time in 10 years (oh Lord, has it really been a decade?), I find it’s still a rather boring read, but I don’t think I dislike it as much as I did then.  The setup is more entertaining than the follow-through, with the drunken Raph and Casey all excited about being shunted off to some perilous dimension while a sober Don just sighs in exasperation.  I especially liked Glurin, all derp-eyed and wobbly.

Once they actually get to the insect dimension, though, it’s just a lot of gun-firing and clichés right up to the end.  There's the tragic motivating character (the woman with the larvae in her brain), the deus ex machina solution (kill the Queen and everything is wrapped up in a neat little package), the guy who heroically sacrifices himself to save the others (the nameless dude who stays behind to light the gas)... nothing particularly original.  It’s all dull as a cheese knife.

The story is worked into the continuity of the series pretty well, though.  It takes place immediately after Splinter’s funeral with the dimensional adventure functioning as a means for the characters to take their minds off of their grief.  Glurin’s investigation into dimensional travel was referenced early in Volume 4 and this is where it comes to a head.

The “alternate universe” the characters travel to may not be an alternate universe at all, but the future of their own universe.  It all makes sense, with references to global warming destroying human civilization and the presence of giant monsters lurking around.  All of those elements were shown to be a part of the Mirage universe future and the references were seeded throughout Tales of the TMNT Volume 2.

Really, though, I can’t believe it took three people to come up with a plot this thin.  I suppose you can see ideas from all three creators sprinkled about: References to Laird’s Volume 4 series, Murphy’s pissing and moaning about global warming, and Lawson’s tiresome boner for Moto Guzzi brand crotch rockets (the bike Casey picks up and compliments has “Moto Guzzi” emblazoned across it).  But even though you can see everyone’s fingerprint on this tale, the actual story is pretty plodding and weak.

Grade: D (as in, “Did I mention it’s basically one big riff on ‘Aliens’?  I guess that cover to Anything Goes #5 finally came true”.)